Hello person reading this on the Steam update page for their favourite game! You can only read this paragraph introducing the Steam Charts right now, but I promise if you only click through to the full article you will read insights into this game of the sorts you could never believe! People, it's the mother-stuffing Steam Charts.

It's definitely our turn. We need to make sure there are giant animals of some nature to ride, some notion of an allusion toward crafting and world-changing options, and a way to build your own house. (Dear me, don't forget the houses if you want to survive the forums.) Ark's done dinosaurs, Dark And Light's done dragons, and Citadel does direwolves. So we'll do... hippos! And the game's set in... the Shetland Isles! Yes, yes, this is working, let's keep spitballing...

We're going to need to be more than just another Ark though, I think, from Citadel's plunge down to #10, and languishing deep on page 2 of Steam's best seller listings.

H1Z1 barely ever goes anywhere, just bouncing around the full stretch of the top 10 each week. I think we're going to need some battle royale last-man-standing too.

Right, so, players start scattered around the various Shetland Isles, all 300 of them. Luckier players get one of the 16 inhabited islands, the rest have to forage and make do on the craggy rocks, and everyone begins the race to Lerwick. Along the way they can complete a number of quests handed out by... mermaids? Mermaids. And, of course, capture, train and eventually ride the islands' population of hippopotamuses. We'll carry on at GTA V...

Well here's lovely. While the fabled Story Mode didn't quite live up to our desires, The Long Dark remains one of RPS's favourite survival sims, wooing many of us over the last three years. So it's really very nice to see that it's selling well enough for a chart position. It's a very beautiful, very clever game, and one of the most brutally difficult of the bunch. Especially because of those bloody wolves.

I still crave a mode that calms down the wolves without reducing the rest of the difficulty to pointlessness, and most especially one that lets you only need to eat a realistic amount of food to survive, rather than scarf an entire buffet every 30 minutes, but as it happens the Story Mode balances this quite nicely, with its extra supplies of scripted carcass discoveries. There's a sentence. Right, we're going to have a test. There's some required reading.

1) Should I pre-order games? Obviously the only way to get from island to island is by hippo, so we'll have to make sure they're swimming around all the outer islands to give players a chance. And I think we'll need a bit of Plunkbatty arena shrinkage to force everyone to Lerwick, and the final battleground of the harbourside Specsavers.

And mods. If there's anything the incessant sales of GTA V tells us, it's we need mods. And bans. Mods and bans. Just keep adding mods, and keep banning everyone, so they have to keep re-buying the game to keep adding their mods.

As if we needed any other proof that the game we're all so brilliantly coming up with this week is sure to make us rich, here's yet another new entry of yet another sandbox MMO. This one is rather charmingly "filmed" like an RTS, where players control a lone unit in the top-down world. That's splendid! Well done everyone involved. And unlike most of these early access sandbox MMOs that will soon take all ten positions in the charts every week, this one has mostly positive reviews.

Should we make our game top-down? It might save on art. And, as I write "our game", I realise we don't even have a name yet! Let's figure one out under Counter-Strike. 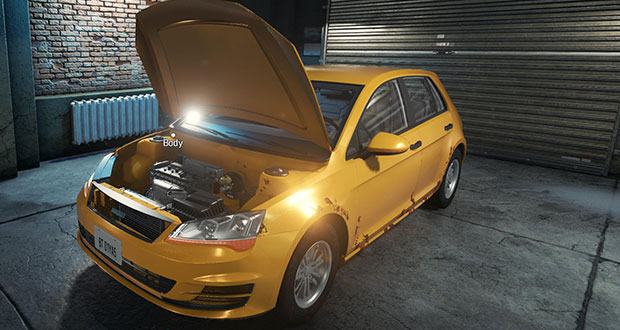 What a peculiar thing. The game comes out, it's a game about pretending to be a car mechanic, AND it barely works, and it charts. That was odd... last week. That it's stayed in the charts even in the face of a mea culpa from the developers that read more like a hostage forced to speak the words of his captor, and the reality that the game - as lovely as it is - just isn't in a working condition, is quite bemusing. Still, there's no doubt that the devs are working flat out to get it up and running.

(Should we try to make sure our game doesn't work? It does seem to get a lot of press for your project?)

We need a name! But crucially, it mustn't be anything to do with what the game's about. That much is obvious. You might think Shetland Hippos would do it, but as truly brilliant as that name is, it directly contains two key elements of our game. Ark isn't called Ark: Ride Dinosaurs. Plunkbat isn't called "Battle Royale But With Chicken". We need to be tangential.

I propose: Archipelago: Battle For Supremacy.

We're going to be so rich, everyone!

See, I tried playing this, and it was like hideous flashbacks to when PC Format would ask me to review a Korean MMO in the early 2000s. But here it is, number 2 again! Sandbox MMO with monsters to sit on. This is the secret sauce, and we're going to bottle it folks. We're going to bottle it up, and mix it with ol' Puggles, and we'll be buying Caribbean islands within the month.

So, let's do this! We've done so well, everyone! Archipelago: Battle For Supremacy is going to be the number 2 smash on the Steam charts for months to come. We'll split the profits - I reckon 75:25, because if we're honest, to be blunt, I've put the most work in so far.

Does, um... Does anyone know how to make video games?