Green Cities might look like urban paradise, but beneath the lush vertical gardens, something sinister is percolating. Sure, the draped greenery clinging to the side of the new high density apartment blocks looks attractive, but it's also reminiscent of post-human imagery; nature reclaiming the land. Zoom out far enough, so that the little cars and people are less apparent, and it’s not a great leap from green city to Twelve Monkeys, I Am Legend and The Last Of Us.

But forget the future for a moment because the now of Cities: Skylines [official site] upcoming expansion isn't the paradise it initially seems to be. Your attempts to create an environmentally friendly utopia might end with the construction of a new Silicon Valley. The road to hell is paved with reclaimed wood and good intentions.

I've been building a new city on Skylines recently and it's taking on an unusual shape. Usually, commercial zones form the buffers between industry and residential areas in the early stages, ensuring that people have at least a little distance between their homes and their smoggy workplaces. This time, I'm experimenting and the first few people who moved in lived right in the backyard of the pollution-belching smoke-stacks. 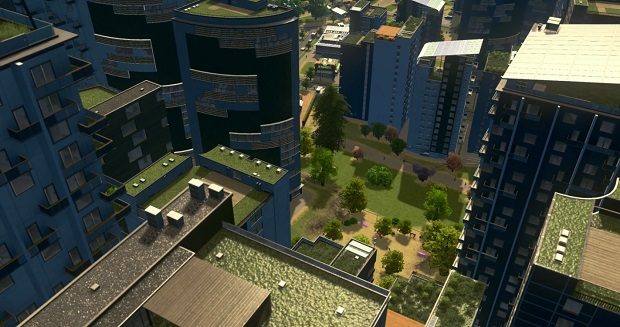 Predictably, they got sick. Happiness was low, health was a problem, and I was a very unpopular mayor. The roads were quiet though because nobody had much of a commute to deal with.
Long-term, the plan was always to make some money off the back of those early communities and spend it to build a beautiful beach-front community, with beautiful designer houses and extravagant sky-scraping apartment blocks with only the most luxurious fittings. The people there would be educated and they'd have office blocks to work in. No noise, no mess, no sickness.

Keep up that kind of city for long enough and it'll probably develop its own Young Adult Novel style social segregation system for the youth. For now, the city seems like it'll develop just fine and even if the people out in the industrial district aren't too happy, the overall happiness of the city as a collective is just fine.

Green Cities would fit perfectly into my experiment in division though. You might think cleaner energy and workplaces are wholly positive things, excepting perhaps the price, but even if all of the numbers and info overlays look good, I'm not entirely sure I want to unleash the IT crowd onto my city. Or at least, not onto my ideal city. They can go and create more social segregation in this new place I'm building.

IT specialisations allow for new types of district populated with high-tech offices. They produce lots of tax revenue but don’t require as many employees as traditional industry, and attractive as they are with their garden terraces and shiny solar panels, you know they’re packed full of beanbags, ball pools and marketing departments called Idea(l) Stations. Bowtie-wearing Imaginauts hired straight out of college, with degrees in Twenty-First Century Business Dynamics. That one guy who walks around chewing a stalk of raw cane sugar because “it's the only way to snack that isn't compromised”. 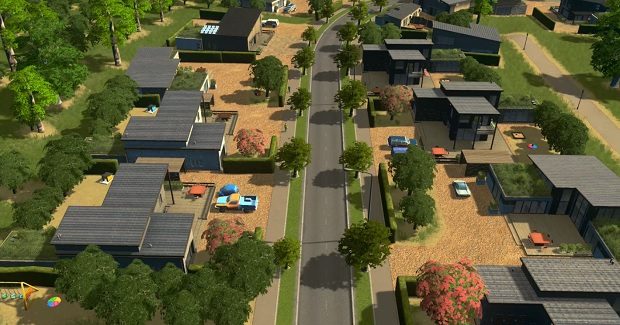 Peel back the green curtains and you're going to see all of this and more, and chances are you'll still have some manual labour happening elsewhere in the city. The extremes of the IT specialisation should highlight the divisions between one district and the next, and you might not only be able to build San Francisco as it is today, but come some way to seeing the various shapes it moved through before getting there.

The accelerated timeframe of Skylines, which has every city go from genesis to metropolis in the same era, prevents it from exploring the ways in which history provides shape. There are no great technological leaps forward or social changes that alter the course of development. Instead, you're broadly free to sculpt as you wish.

Some of Green Cities features, including the cleaner energy options, might be prohibitively expensive for a fledgling settlement though, so you'll build toward them rather than throwing them down as soon as you start. There are even floating water cleansers, that look like something out of science fiction. They sit in the bay, sucking up that brown poopy liquid that Skylines itself specialises in, and leaving behind beautiful blue water fit for drinking and swimming in.

The waterfront might be the most attractive area of Green Cities. There are new floating buildings, connected to the mainland by a pier. This allows for all kinds of attractive cafes and restaurants out on the water, and with all of those beautiful high-rises topped with garden terraces as a backdrop, it's a reminder of how beautiful the game can look when a handsome skyline is framed at just the right time of day. 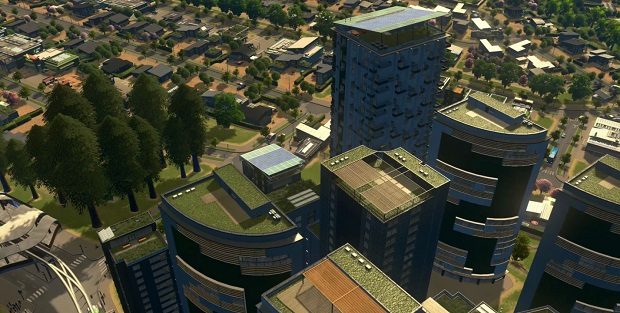 And framing is what Green Cities is all about, I think. It's an asset pack, tied to some new rules around noise pollution (which I'm grateful for) and policies that encourage use of electric cars and other green ways of living. It's a massive asset pack, for sure, with over 350 new things, and it's a very attractive one. But it's adding new options rather than more complex simulation. I very much doubt there'll be any pushback to my silicon valley, or any real drawbacks to reshaping the city's economy around it.

As I mentioned at the beginning, even my sickly workers in the muck-zone don't have any real impact on the wellbeing of my city as a complete organism. Their unhappiness is drowned out by the happiness of the masses. While I'm not asking my people to protest in the streets when the gated communities around their IT overlords fall into place, I'd like to see some tension between urban progress and those it leaves behind. There's overlap between social strata, transit, high-tech industry and all the rest, after all.

Perhaps Skylines will never touch on these issues. It is, after all, at its best when it uses the land as a canvas and the city as a set of toys. The simulation is robust enough to make it more than a construction playground, but not so complex that it requires more than a basic awareness of how things move from one place to another.

That's fine. I want that game in my life and I want it to have more and more variety, so Green Cities is welcome. But I will absolutely be simulating the dark side of my Green Cities as I play, and the more time I put in, the more I'm starting to realise that I'm still in the market for a modern city-builder. Not a replacement for Skylines, but an alternative. One where every choice of asset has a possible consequence down the line, as the city pushes back or recoils.

Green Cities will cost £9.99/12,99€/$12.99 and is out later this year. As always with Paradox expansions, some features will be available for free in a big ol' patch delivered at the same time.