If you click on a link and make a purchase we may receive a small commission. Read our editorial policy.
Developer: Storm In A Teacup
Publisher: Wired Productions

Here is a story. Daedalus was a brilliant inventor, and designed the maze that kept the bloodthirsty Minotaur captive, but he and his son Icarus were themselves both kept as prisoners of King Minos on Crete, so that nobody would learn the secret of the Minotaur's labyrinth. Eventually, Daedalus built wings from feathers and wax, so that he and Icarus could fly to freedom, but he warned Icarus not to fly too high, or the sun would melt the wax.

Icarus flew… too Close To The Sun. [cool sunglasses emoji].

Close To The Sun is the first in the new genre of this-is-definitely-not-BioShock-honest exploration horror, or as I’ve been thinking of it, spooky Art Deco Firewatch. It continues the Greek mythology theme in its chapters (of which there are ten, running to about 5 hours), called things like The Border Of Hermes, The Fire Of Prometheus, The Strife Of Eris. They’re often a little clue to what’s coming up next. But even having played through the whole game, I’m not sure who the metaphorical Icarus to the game’s title is. 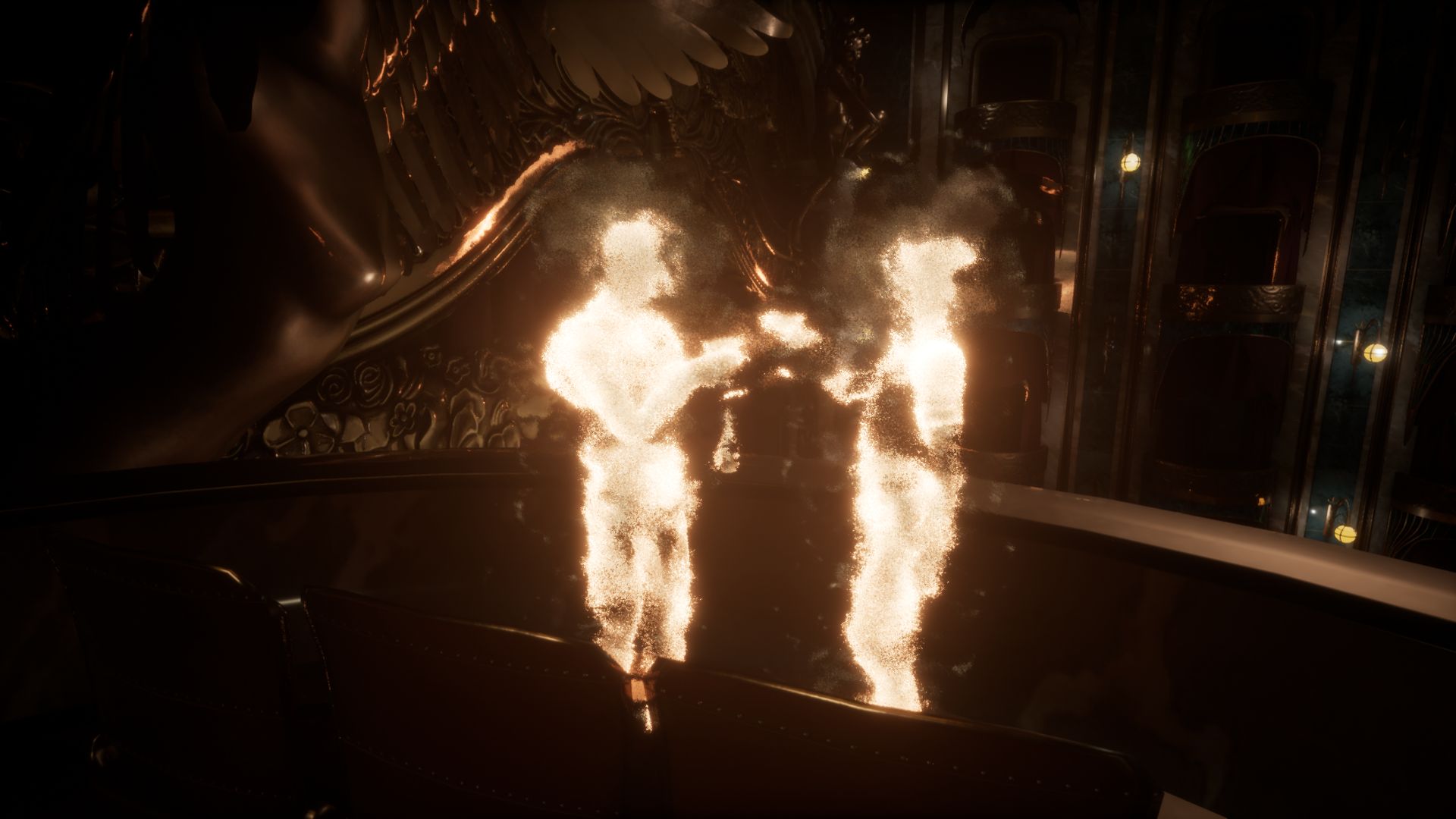 Is it Nicola Tesla, who in this alternate timeline won the science race against Edison and now lives on a giant ship, the Helios, with every other amazing scientist, artist, or general smart person of the age? Is it your sister Ada, whose dangerous theories were used to meddle with time itself? Surely it’s not you, Rose, the plucky journalist who’s now trapped aboard the stricken Helios, putting her, in a textual sense, very much too close to the sun? All these and more, perhaps.

The game starts as Rose arrives on the Helios, having received a cryptic letter from Ada, and it turns out that stuff has very much gone down. A quarantine is in effect and the giant ship (so massive that it issues its own passports) is mostly deserted. You have to explore, gently puzzle, and sometimes sprint for your life around the Helios to find Ada, escape, and theoretically figure out what in the heckening is going on. 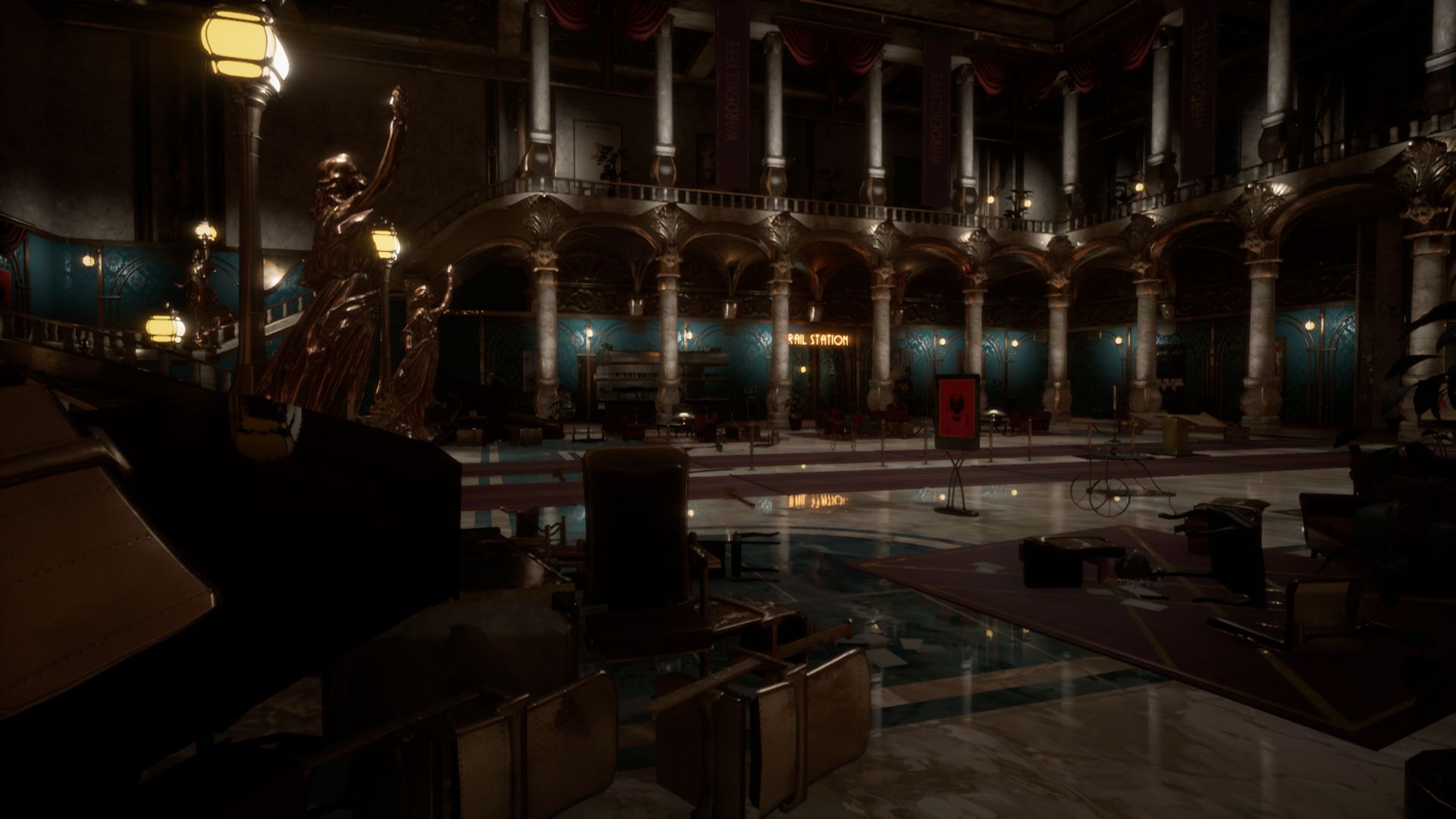 Close To The Sun exists in a potential sweet spot for me, a mix of horror and leisurely exploration, and I enjoyed a lot of it. It excels at toying with you, particularly in the first half of the game, and paces itself so that you’re constantly tense even when you have nothing to fear. The jump scares are few but well placed, and are triggered by what you’re looking at rather than e.g. when you enter a room. You won’t hear a sudden ominous piano chord and realise you entirely missed something scary happening behind you. The scary things will happen in your face.

In the later stages of the game, as the danger is more fully revealed and the body count increases, a lot of this tension is lost ‘cos you sort of know what to expect. You know in what form the danger comes, where from, and what’ll happen when it does, which is a frustrating run-or-die section where you leap over or squeeze past obstacles. It takes a while to figure out that if the icon to jump is white it means click to interact, and if it’s yellow it means space bar. Or it might be the other way around. Either way, these sections are punishing to play, and I had more fun when I was imagining scares that didn’t exist yet and creeping warily around lovely nautical state rooms. 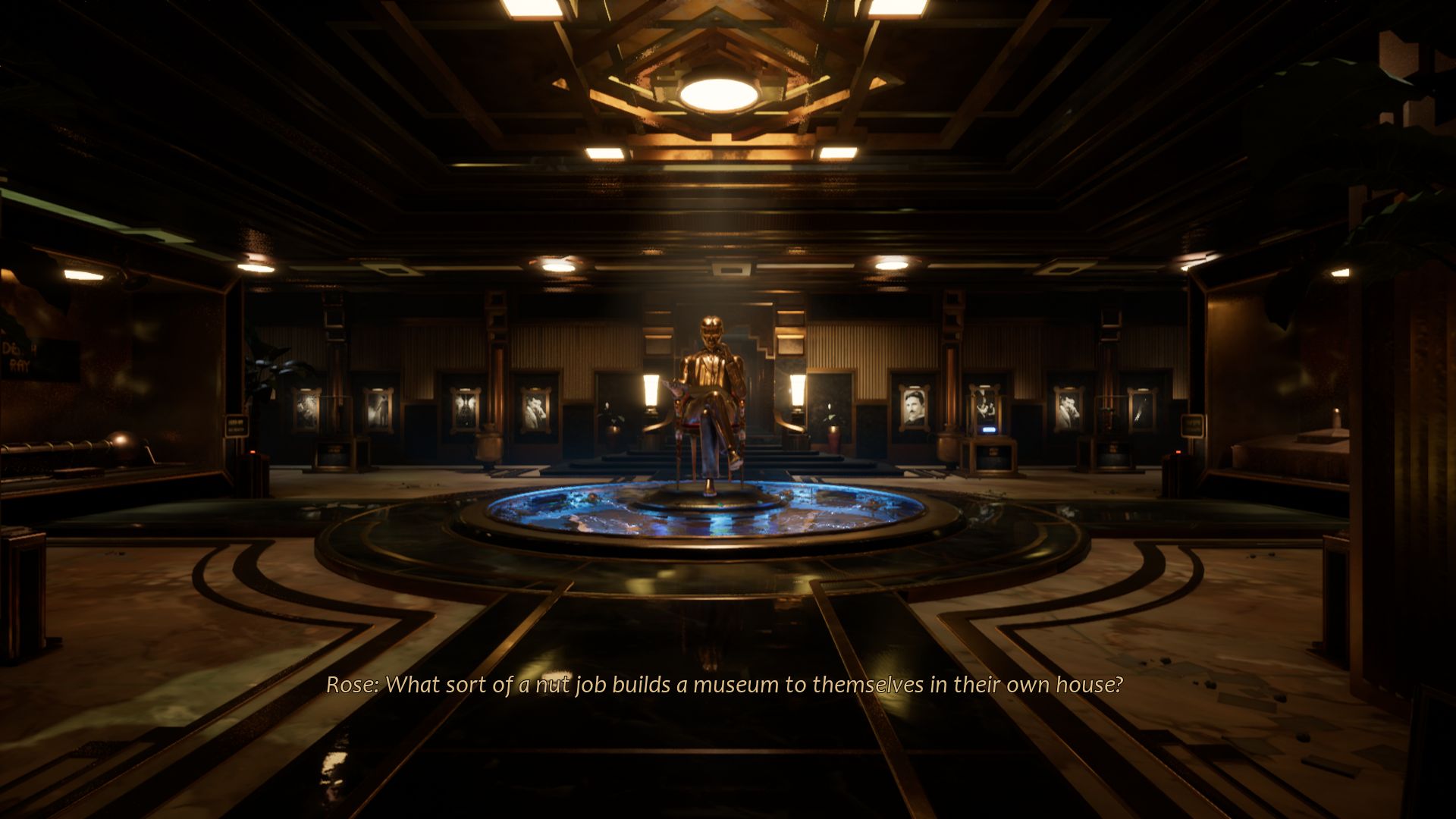 Storm In A Teacup, the developers, have emphasised several times that Close To The Sun is definitely not BioShock. And it’s not; you don’t get any weapons, when you’re in danger your only option is to cheese it, and it’s certainly not Storm In A Teacup’s fault that most players’ first exposure to Art Deco was in Andrew Ryan’s Magical Libertarian SeaWorld. It’s a lovely design style! Why shouldn’t anyone use it in their game, dammit? But at the same time, and possibly because the Helios already reminds you of Rapture, some of the story beats feel like Close To The Sun was sitting next to BioShock in class and cribbing answers. Advanced science gone wrong? On an independent colony at sea? Time loops and what have you?

That’s not to say that Close To The Sun doesn’t do its take on these things well, and a lot of the time I was enjoying it more because nobody was shouting Objectivist talking points at me. It helps that Close To The Sun does a lot of detail work, making the Helios feel like a place people actually lived and died in. There are scattered papers, desks and rooms arranged differently, narky notes left to the cleaners. Rose waves her hand in front of her face to brush away clouds of flies rising from corpses. There are loads of references to pigeons, for the Tesla fans. Ghosts of the past sometimes appear, Everybody’s Gone To The Rapture style, to play out recent events or lead you to a puzzle. The Helios is stunning, too, a temple of ruined glory that can be beautiful and ornate, or mechanical and functional, but always gloomy and creepy. 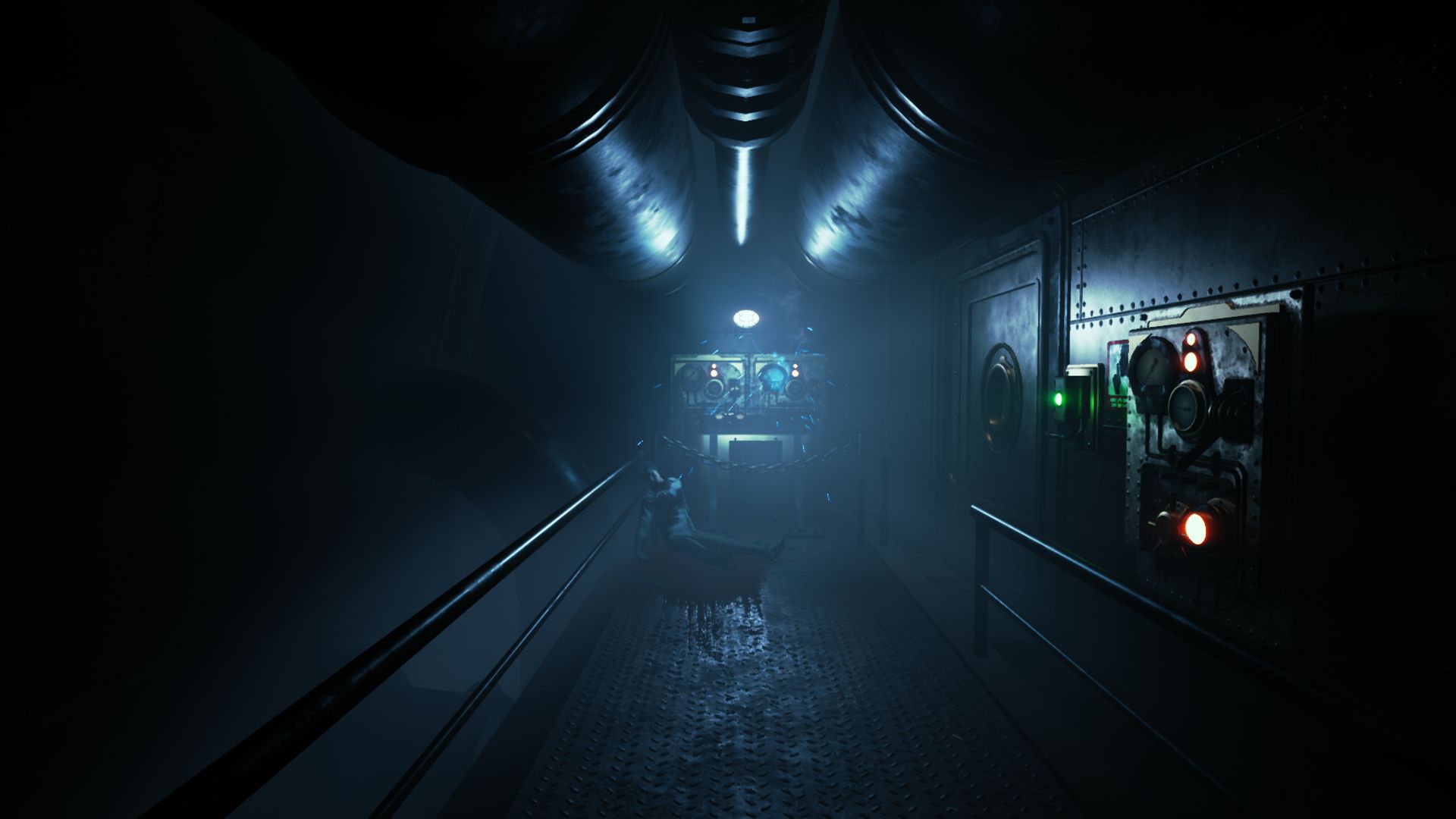 The mystery of what exactly happened to the ship to get it in this state, and why (and when) is teased out slowly, and you’re rewarded for exploring with collectibles and extra details that give new angles the story. One involves solving a riddle to eventually break into a room and find one of the character’s secret backstories. The voice acting is fabulous, too, the stand out being Aubrey, the older scientist who guides you around the ship over radio, while he’s trapped in the engine rooms cheerfully gnattering to the corpse of his mate Benny.

This makes it all the more disappointing that a bunch of these mysteries are unsolved, left suddenly dangling at the end of the game as if waiting for a sequel or chunky DLC to tie them off. I wish my adventure on the Helios hadn’t ended so abruptly and I feel a wee bit short changed, but I’d still be really pleased if they announced an add-on -- like being cheated by a 20s newsie, but he did it with a bit of flair and a cheeky grin, so you let him get away with it.