"This is a cool thing I found," Dominic told our Slack channel. "But it probably doesn't meet the qualifications for a news hit on the site." I agreed. But then I watched the video and then I thought, "Yeah, it isn't exactly news. There haven't been updates on the game in a few months. But the people... the people should see the game." And I wasn't wrong. After all, a randomized rogue-lite free-roaming dungeon crawl based on 90s shooters -- which keeps the blocky graphics and bullet-hell elements alive -- well, I couldn't imagine anyone being upset about me taking some time to share that. Even if it seemed I was putting in a lot of effort to hit the minimum word count for the piece. The piece that I was writing. Trying to hit the minimum word count for that. Which brings us to Compound. Compound is the name of the game.

Compound is a tough-as-nails retro FPS with multiple locomotion options for Vive and Rift users. There's only a demo available right now, but it's free to play and a delightful five minutes. I think you'll see why:

That's just fantastic, right? It's a Duke Nukem 3D art-style game, fully realized in VR in such a way that it feels fresh but also alive. Like, the most exciting part for me is seeing the leans around the corner and the smooth transition from standing into kneeling -- but also some of those dives to avoid bullets makes me think that bullet-hell shooters in VR will be my ultimate work-out. It really makes me want to see Crusader: No Remorse remade in the same style.

The game's creator has a post apologizing for the slow stream of updates. Hi, Bevan McKechnie! We really want you to finish this game! We're all rooting for you!

You can grab the latest version on itch.io and Steam (click that there demo box). 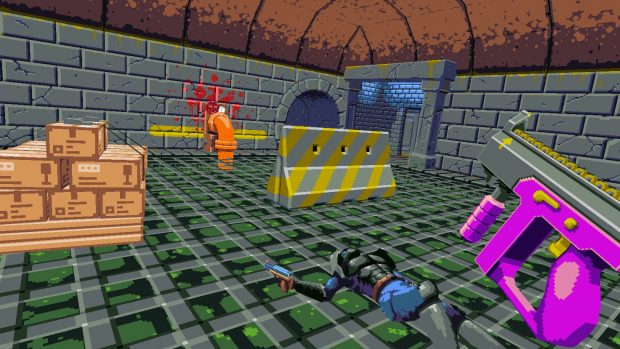