This year’s Computex will probably be remembered for both AMD and Intel’s duelling “Mine’s got more cores than yours, pal” processor announcements and the conspicuous absence of the new RTX GPUs. But if there’s one thing that nicely encapsulates the show as a whole, it would be the assortment of mad custom case designs on display.

They're the logical conclusion of where, judging by two days spent on the show floor, component design is heading when it comes to building a new PC: big, brash and almost definitely laden with RGB lighting. It's a testament to how ambitious some of these designs are that even among such flashy company, certain models still manage to stand out. Here are five of them! 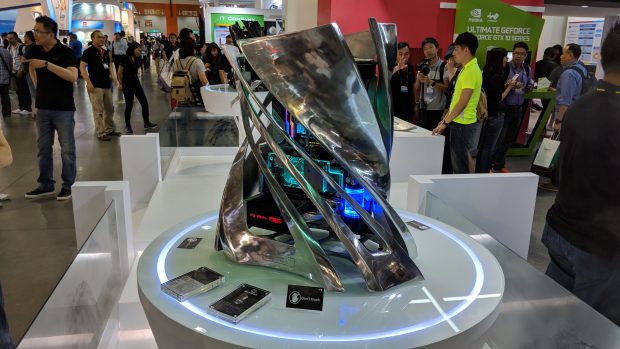 The Z Tower (or Z-Tower – InWin are a bit inconsistent on the hyphen) is supposedly inspired by modern architecture, and while that’s presumably more of the ‘expensive sculpture in a park’ variety than ‘Milton Keynes office block’, it certainly makes for a strikingly unique chassis.

It’s another creation of veteran Chinese modder KuN Mod, who contributed the bubble-shaped WINBOT case to last year’s Computex. The Z Tower appears to be a simpler concept, at least in terms of features: there are no moving parts and the motherboard, power supply and liquid cooling hardware all appear to be mounted in a simple setup that’s reminiscent of a bog-standard ATX case. Still, the helix shape is full of gaps that provide a nice, clear view of the components humming away, and it’s presumably a lot better for ventilation than the WINBOT in its closed state.

I’m also a fan of how the metal’s curves are very, very slightly imperfect, most visibly in that large upper concave. It’s unclear if KuN Mod was actually aiming for an immaculately smooth finish or not, but to my eyes, the signs that it’s been manually shaped make it look more like a genuine sculpture and less like something that might be background dressing in a Mass Effect game. 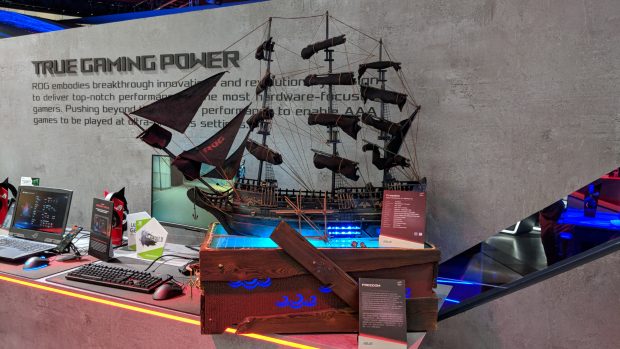 This initially looks like a bit of a cheat, as if the PC parts were simply placed inside a rectangular box underneath a pirate ship model, with none of the intertwining of components and chassis that make a truly barmy case mod.

Admittedly, the PC parts HAVE been simply placed inside a rectangular box underneath a pirate ship model, but there’s an attention to detail here that earns the Freedom a place on this surely cosmically-important list. There’s the not-so-small matter of the ship being built entirely from scratch, with cute little ROG sails, and the decrepit hand grasping out from within the box is an excellent touch that breaks up an otherwise a dull, flat surface. The real wood construction and tastefully bent nails add a suitably rough feel, and the blue glow from the exposed RAM sticks really helps sell the ghost ship theme.

Going back to the idea of integrating individual components throughout the case, I did think it odd that the Wi-Fi antenna was merely placed on a pile of rocks next to the ship’s stern, when its long, thin shape could have made it a cunningly-disguised rudder. I’m not sure what other parts would fit into an old-timey boat, though. Maybe an M.2 SSD drive like the Samsung 860 Evo as the plank? 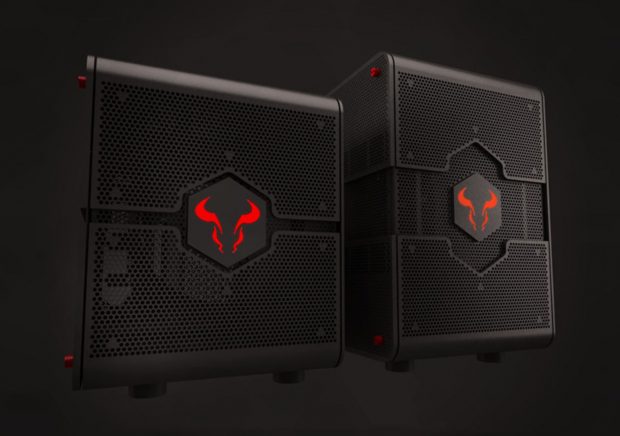 Unlike everything else here, Project Morpheus could turn out to be both a good idea and something you could actually buy: a microATX case that, with the addition of a few modular panels, can transform into a more spacious ATX chassis with support for two graphics cards.

For now, though, it remains in the concept stages, and since Riotoro aren’t exhibiting at Computex proper, I haven’t had to chance to see it in action. Still the released renders make it look pretty good, with its understated all-black mesh panels. More importantly, the idea is sound – microATX systems often make the most sense for first-time PC builders, due to lower component costs and the tendency of rookies to start with simple specs. In time, as the urge to upgrade your graphics card, add more storage or install liquid cooler rises, that initial choice of a compact case can put a limit on upgrades.

If Project Morpheus is fully realised, then there could be no need to buy a new case at all. That is, currently, a sizeable if, but at the very least it’s an idea worth pursuing. 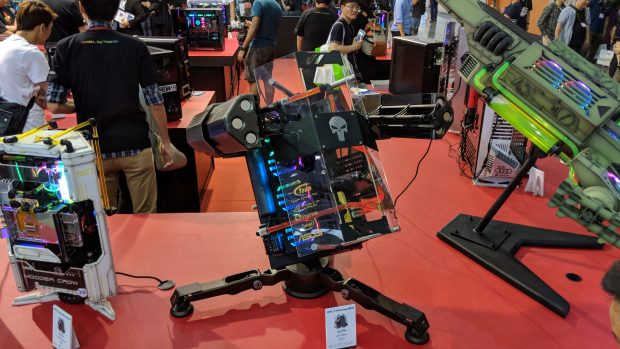 Somewhere inside this beautifully hideous minigun/riot shield offspring is the Core P90, one of Thermaltake’s off-the-shelf cases. Or, at least, the guts of one – you can make out the original criss-crossing chassis bars, but the tempered glass and plastic feet have been swapped out for a hand-cut acrylic shield and a massive metal tripod.

Its party trick is being able to spin a full 360 degrees, just like a real RGB robot sentry gun, while this completely plays into the fantasy of having a Team Fortress 2-style rotating machine gun buddy standing guard, it seems like excessive use of the feature would be a fine way of coiling cables and yanking your monitor off its desk.

Still, the craftsmanship is mighty impressive. It’s heavy and solid in a way that many, more delicate case builds aren’t, and that’s entirely appropriate for the whole this-thing-will-murder-you aesthetic. I can see why it won first prize in Thermaltake’s Modding Fighting Championship Season 2, which concluded in March this year; it also seems like a more practical PC to own than the second-place winner, thanks to its easily accessible USB ports, well-ventilated internals and the fact that it’s not a two-meter-long sci-fi gunship. 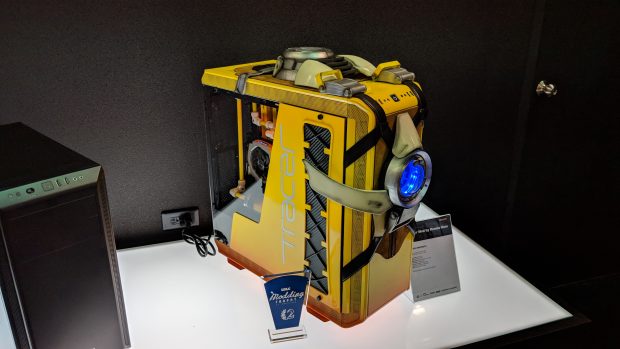 This is a relatively simple modification of be quiet!’s high-end Silent Base Pro 900, adorning it with the time-travel thingy worn by Overwatch’s Tracer. Nonetheless, it’s clear that a lot of effort has been put into the details, and personally I can appreciate when case mods can evoke a piece of fiction without just plastering the logo everywhere.

Take how Hara didn’t just stop at accurately replicating the magic clock harness; there are also patches of leather (or possibly faux leather) and a zipper, alluding to Tracer’s flight jacket. It would have been nice to get some wool for the full biggles look, but fluffy textiles and computers do rarely mix. There’s even the strings (laces?) from her leggings down the side.

I should say that when I sent a picture of this case to some Overwatch-familiar friends for their reactions, at least two thought it was meant to be Claptrap from Borderlands. I won’t hold the fact that I have idiot friends against it, but maybe it could be even more Tracer-y: when you boot up, for instance, instead of a beep you could get some chirpy voice line in an unconvincing Cockney accent. Or maybe it could go with the Blizzard school of design and put an unsettlingly visible bum over the rear I/O panel. 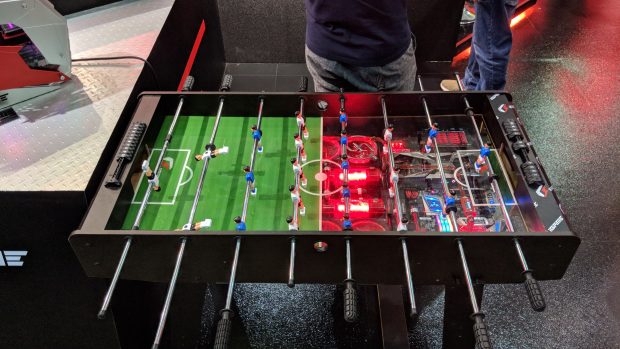 It’s a table football table with a PC in it. I rest my case.