If you click on a link and make a purchase we may receive a small commission. Read our editorial policy.
Premature Evaluation is the weekly column in which Steve Hogarty explores the wilds of early access. This week, he can't stand the heat in hardcore kitchen sim Cook, Serve, Delicious 3.

The Cook, Serve, Delicious series of restaurant simulators are designed to dissuade anyone from ever considering becoming a professional chef. They are hardcore time-attack food prep games in which the vast breadth of the culinary arts are reduced to a combination of deft keystrokes, recipes become quickfire memory puzzles, your kitchen is a foodie mind palace and orders stack up like tetrominoes.

If you’ve ever watched Gordon Ramsey’s Kitchen Nightmares USA – the superior version of the Kitchen Nightmares global franchise, because oh man, Americans – there is the inevitable scene in which Gordon holds up a bad lasagna to a flailing head chef and demands to know what kind of bullshit he thinks he’s serving. Look at that, he says, holding the bad lasagna up to his chin and glowering over it like a menace. I wouldn’t serve that to my cat you wretched bollock, you utter stain of a garbage human, you miserable wetness. Look at it, he screams. And the chef looks right at it, and places his hands on his hips, and he knows deep down that he should be incredibly ashamed of the bad lasagna. 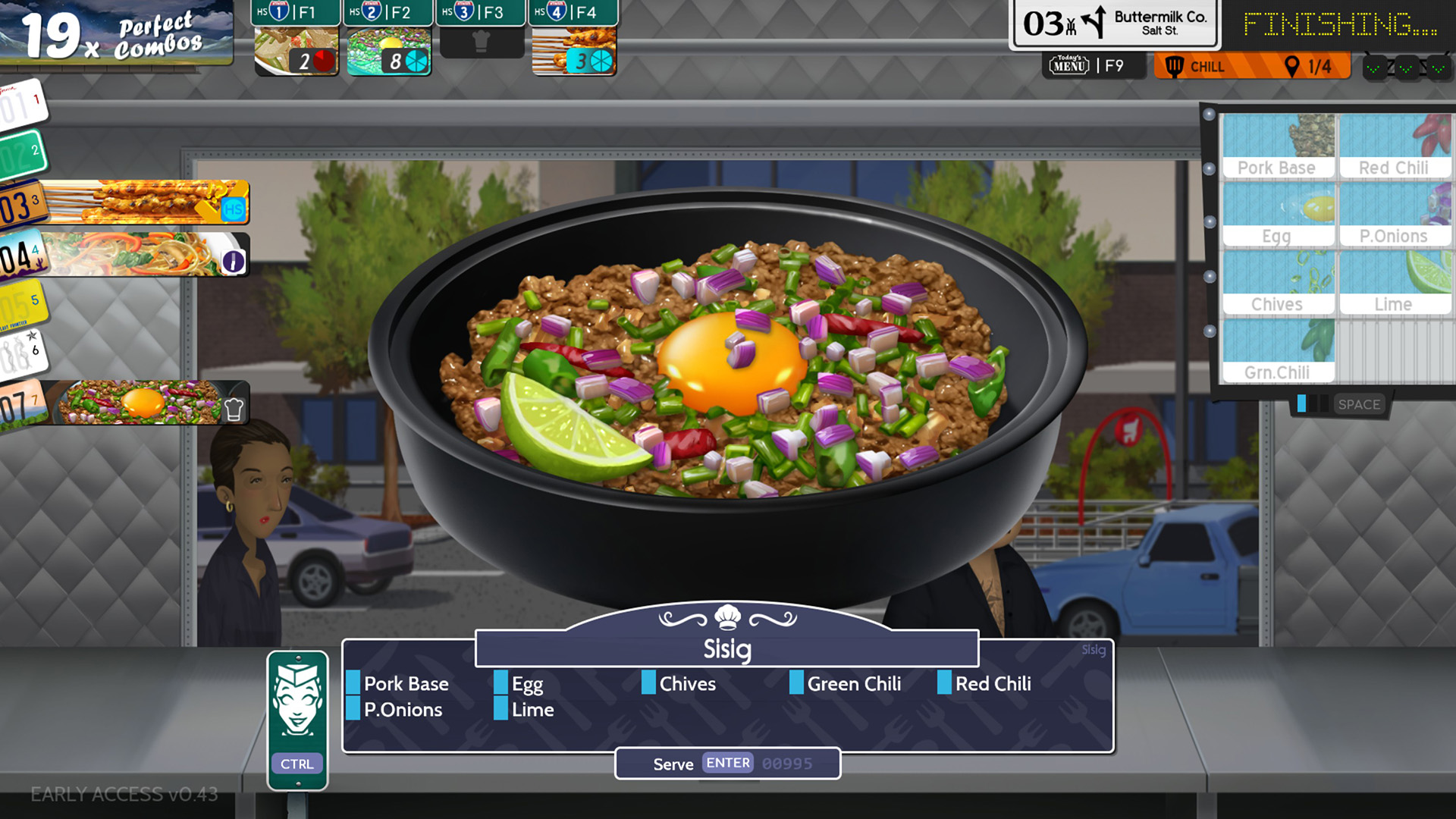 But watch his eyes carefully. He isn’t ashamed, because he has chef vision. He sees the lasagna before him as it truly is: P-S-M-C-R, P-S-M-C-R. Pasta, sauce, meat, cheese, parmesan. Pasta, sauce, meat, cheese, parmesan. Tap-tap-tap-tap-tap. Cook. All of the constituent parts of a lasagna are right there, and in the correct order too. Ramsay can scream all he likes, but no dictionary in the world could deny that this is a lasagna. Cook a lasagna at home and you are Michelangelo. Cook seventy lasagnas an evening and you are Henry Ford at the assembly line.

Cook, Serve, Delicious 3?! embodies the Ramsayan philosophy of the kitchen as a factory, and takes this challenging restaurant simulator on the road, placing you in charge of a food truck as it makes its way across post-apocalypse America. Each day you make several stops, where hungry customers will arrive to order from your pre-selected menu of half a dozen or so dishes. The game is played on a keyboard – other control schemes are available, but it’s still a typing game at its heart – with each dish requiring a series of keystrokes in order to prepare the recipe. This is Typing of the Dead meets Jamie Oliver’s Fifteen Minute Meals. Mavis Beacon x Nigella Lawson. 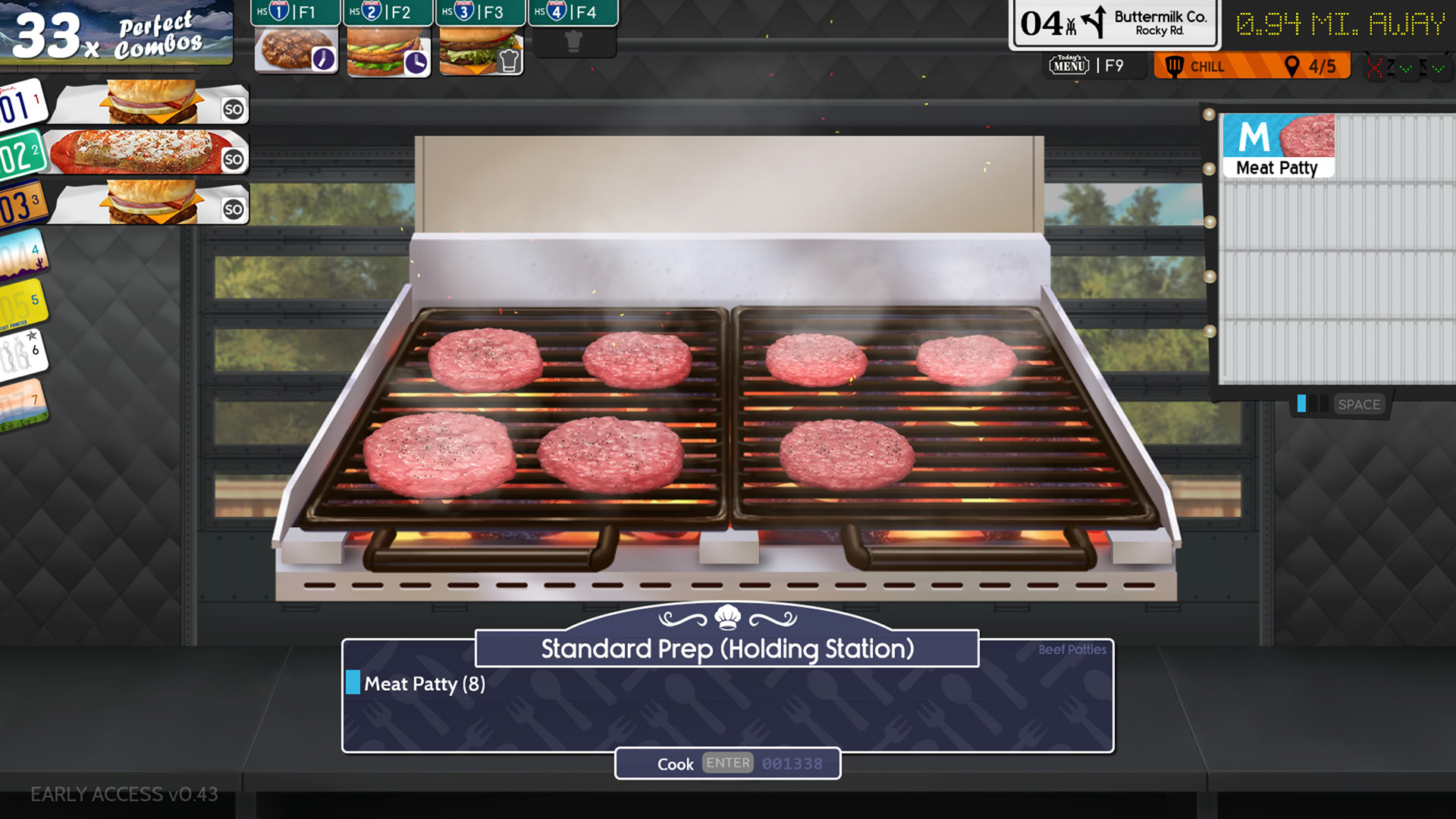 Some dishes are simple: chicken strips can be made by pressing S to load a fryer with strips, then D to dunk them in the hot oil. Falafels are the same, only with an F instead of an S. From there you can associate the deep fryer with a single letter (repeated to prepare a batch for upcoming customers) followed by a dunk. The keys you need to press in order to prepare a dish are always posted on the side of the screen, but to prepare food at anywhere near the speed required to barely pass each stage you need to memorise the recipes and fire them out in a blind flurry of taps.

Subconsciously you begin to form delightful little mnemonics, which make no sense to anybody but yourself. Kimchi is made by pressing K, N, P to fry up K for kimchi, N for onions, and P for pork. I would involuntarily mutter “kimchi? No problem!” with each order, like I’d lost my mind. Some dishes hardly need memorising at all: grilled cheese sandwiches are a special treat, as the steps required spell out SNDWCH. 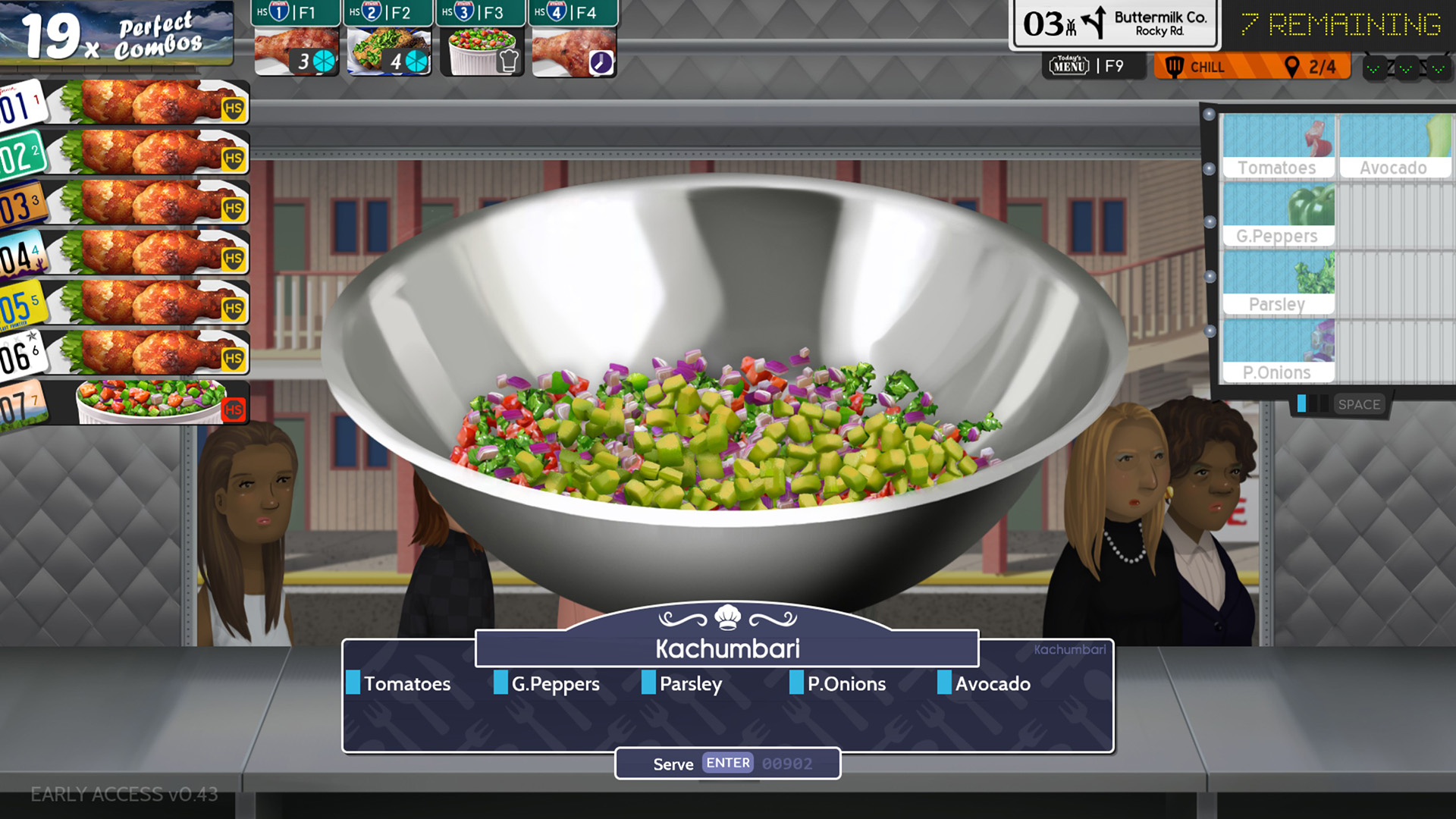 Other recipes are more complex, with long lists of ingredients, or requiring two or more stages to complete. Sisig – a type of Filipino salad made with the less tantalising parts of a pig and some vegetables – is made by first boiling up a trotter, then returning after thirty seconds to plate it up with P, E, C, G, R, N, L, or how I made sense of it, “physical education, computer graphics, royal national lifeboats”.

These on-the-fly memory tricks seem to come from nowhere, delivered to your conscious mind by some dormant corner of your parietal lobe. Each new acrostic is a conversation with the dark side of your brain, a handshake with the friendly autopilot who lives inside your skull and keeps your memories safe. When you’re in the zen-like flow of fulfilling order after order, Cook, Serve, Delicious feels like a mindfulness exercise in fast-forward, like high-speed therapy.

How all of these varyingly complex dishes interact with one another on the menu forms part of the meta-strategy part of CSD3, where a well constructed menu can ensure that your attention can be evenly distributed across refilling your holding areas between stops and prepping special orders when they arrive. Serving customers while preparing new orders is like rubbing your tummy and patting your head, while doing your taxes on a bike. There are six slots in which orders arrive, and food can burn or lose freshness if you take your eye off any one of the balls you’re juggling. Customers can get tired of waiting and leave if you’re too busy stacking custom-order burgers. It can all go south quickly, and frequently does. 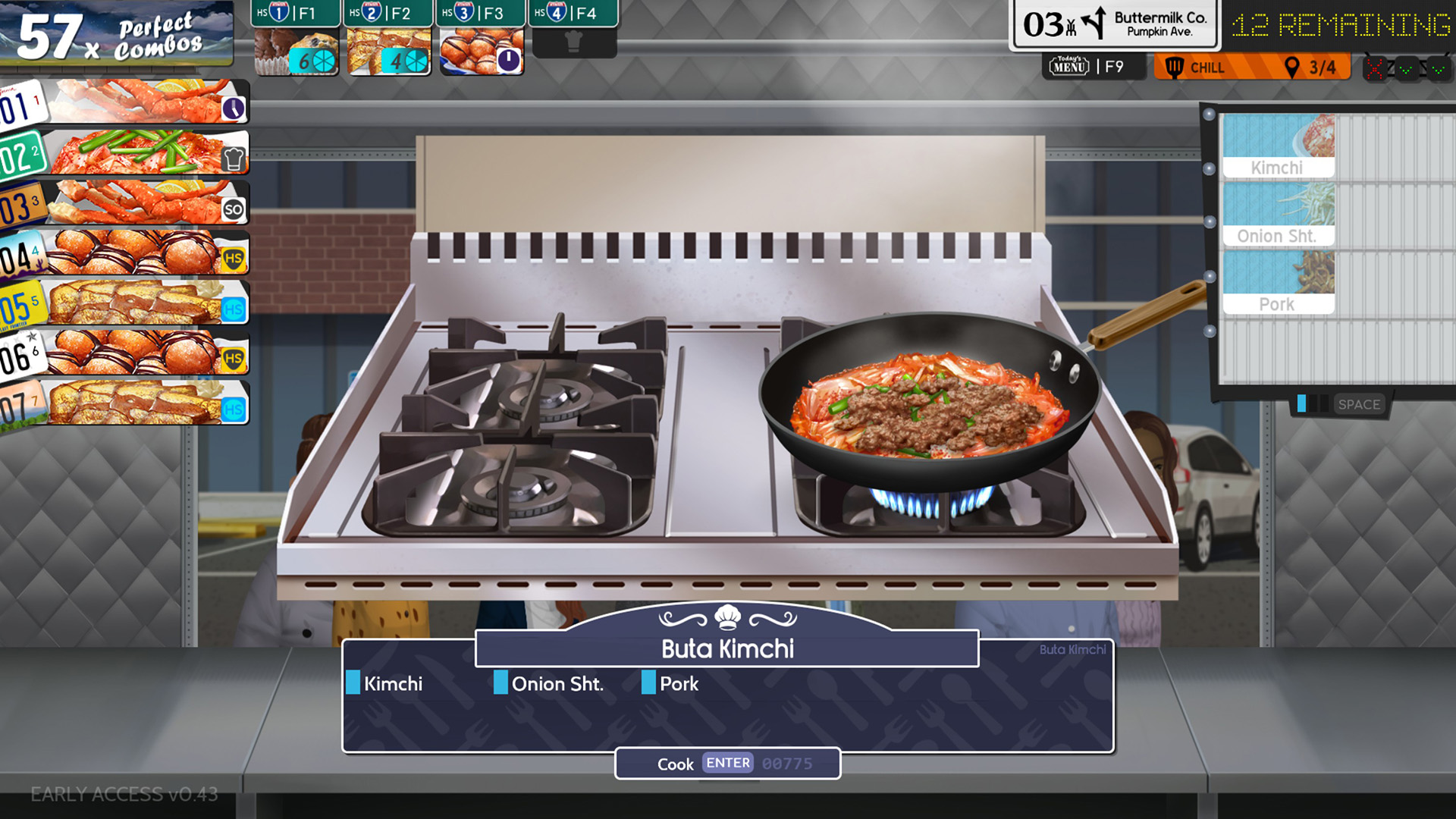 CSD3 is aimed at fast-fingered series veterans. It ditches some of the more tedious aspects of previous games, such as domestic chores which would interrupt your cooking, and introduces new features, such as food truck upgrades and the option to have a friend jump in as a sous-chef by taking control of the mouse cursor. For new players, a “chill” mode gives your customers infinite patience in waiting for their orders to be prepared. This isn’t nearly as relaxed as it sounds – sticking too much bacon in a sandwich or overcooking a curry can still trip you up – but it’s an immensely helpful on-ramp for novices who might have been lured in by the colourful, detailed artwork and lovely music, only to be faced with the horrifying reality of actually running a kitchen.

A relentless and strategic kitchen management game, Cook, Serve, Delicious! 3?! rewards hard effort with moments of transcendental clarity, when plates start flowing and everything is slotting into place. It is meditation. I have never felt a greater sense of peace and purpose than when rolling six burritos in less than five seconds. Prescribe it to people who have lost their way.