Finding a good gaming mouse can sometimes feel like you're stuck in the story of Goldilocks. You don't want one that's too heavy, nor do you want one that's too light. Instead, you want one that feels just right under your palm. Or you could just buy a weighted one such as Corsair's new M65 RGB Elite and make your own mind up as you go along. With three removable 4g weights at its disposal, the M65 RGB Elite can weigh anything from an almost featherweight 97g right up to 116.5g, giving you plenty of leeway to find that 'just right' spot to suit your style of play.

However, when its price of £60 / $50 will set you back as much as the similarly weighted Logitech G502 Hero, the M65 RGB Elite's got quite the task on its hands to prove itself the better mouse. Can Corsair make a better case for best gaming mouse greatness? Let's find out.

From a purely practical point of view, Logitech's G502 Hero wins hands down. It comes with a little box for its four weights, for starters, meaning they won't get lost down the back of your desk if you've got some going spare. The M65 RGB Elite, on the other hand, doesn't come with anything of the sort - no pouch, no carry case, nothing - making them incredibly likely to disappear completely (or get gobbled up by my cats) when not in use.

Likewise, whereas the G502 Hero's weights are all hidden behind an easily-accessible magnetic cover on the underbelly of the mouse, the M65 RGB Elite requires either a coin or flathead screwdriver to fiddle about with them. I found a 50p piece worked best - a pound is far too thick - but even then the weights weren't very easy to pry out. One came out all right, but the others either required a whack against my hand or a poke with its screw cover.

What's more, to get to the M65 RGB Elite's lowest weight of 97g - which I felt was the most comfortable for my spindly girl fingers - you'll have to ditch said screw covers as well, meaning there are now even more tiny bits of metal to go missing inside a drawer. It's hardly the most practical solution I've ever seen, and for sheer sake of convenience I just ended up sticking them all in and using it at its maximum weight - which sort of defeats the point of having a tunable mouse in the first place.

Still, while the weights are more of a faff than I'd like, there's still plenty to like about the M65 RGB Elite. While the white version I was sent for review looks a tad drab compared to the edgy looks and many-textured patterns of the G502, its plain, glossy chassis and lightly textured (but still plain) sides means that, RGB lighting aside, it doesn't look so obviously 'gamery' as its Logitech rival.

Plus, while Corsair say this right-handed mouse is more of a 'claw' style design, I found it perfectly comfy to use with a fingertip-style grip as well, where my palm sits a bit further away from the back of the mouse. Its three side buttons were still within very easy reach from that position, and I never once felt like I had to shift my fingers about because they weren't sitting correctly. 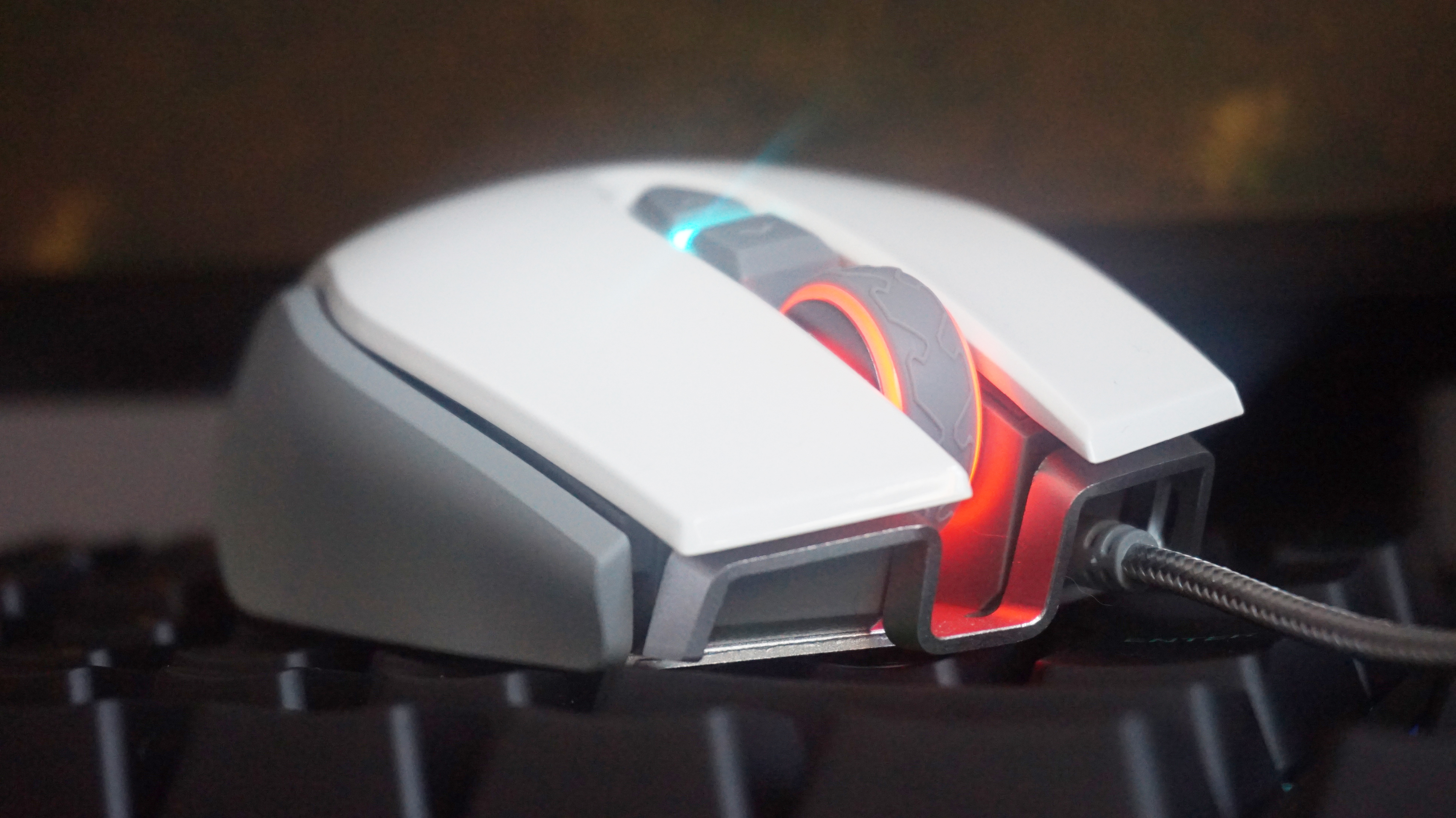 Speaking of extra buttons, the M65 RGB Elite has eight programmable buttons in total if you include the scroll wheel and right and left click, or five if you'd rather keep them to their normal desktop functions. First up you've got two DPI buttons in the centre of the mouse that let you cycle up and down between five different sensitivity speeds. These are set between 400-5000 DPI by default, but can technically range anywhere from a dead slow 100 DPI all the way up to its maximum speed of 18,000 DPI.

That's a full 2000 DPI more than the G502 Hero, but unless you've beamed in from the future where everyone has laser-enhanced eyesight that can track mouse movements at the speed of light, then you're not going to be able to feel the difference whatsoever. After all, most people either don't need or can't handle DPI speeds much above 3000 DPI, let alone 16,000.

There are also forwards and backwards functions on the side in addition to a dedicated 'sniper' button, which slows the mouse's DPI speed right down to whatever speed you like for however long you press it for lining up headshots and the like, or trailing super slowly across humongous strategy maps. 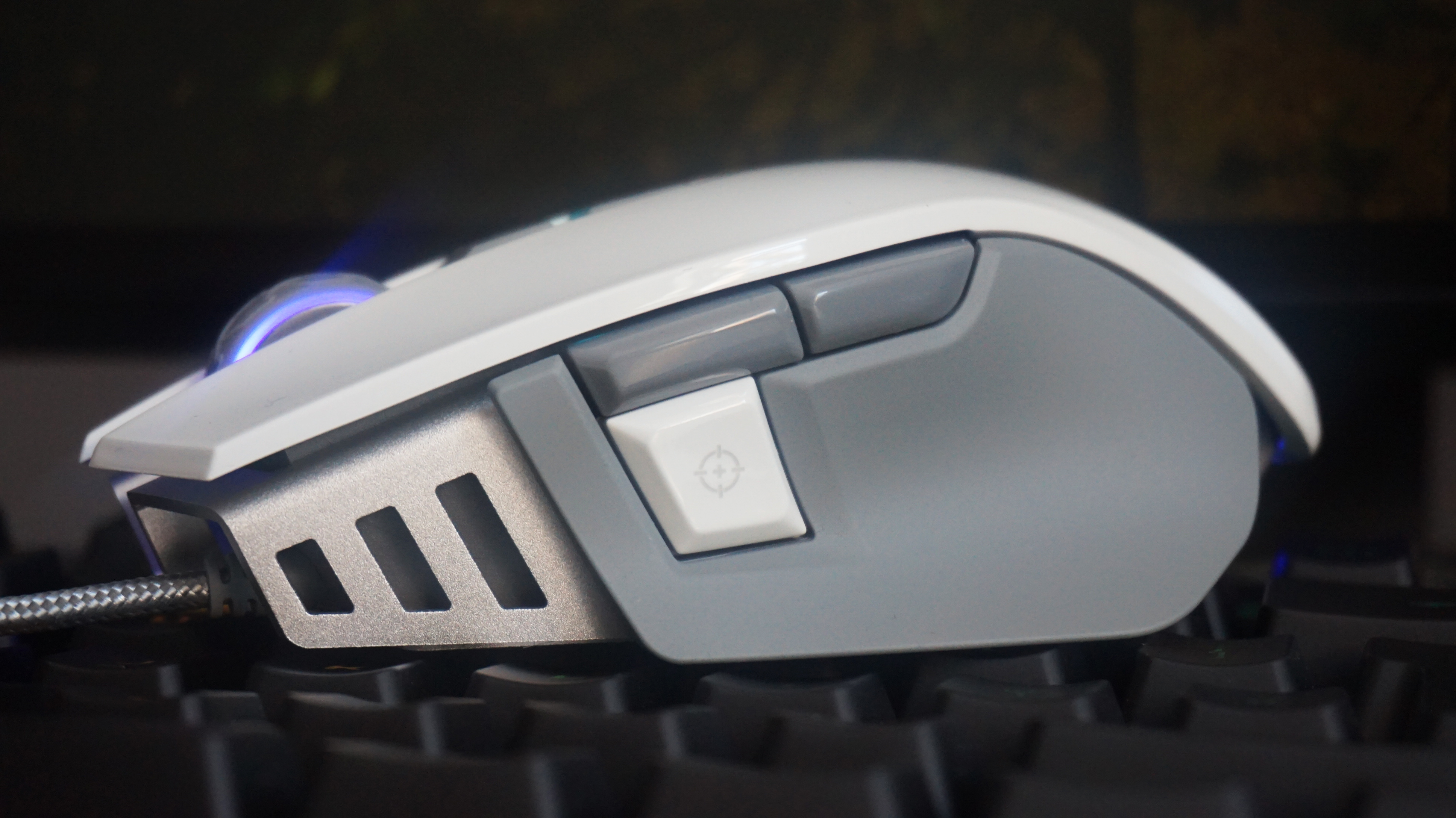 You can, of course, remap all of these to whatever function you like by downloading Corsair's iCUE software. These include recordable macro controls, media buttons, dozens of different keyboard functions and various shortcuts as well as different languages, application launchers, other mouse buttons or your own combination of keystrokes. There's certainly plenty of scope here, and I'm always a fan of any mouse that comes with that lovely sniper button. The Logitech G502 Hero comes with one as well, for the record, but it's always good to see one nonetheless.

Once again, though, the G502 Hero manages to come up trumps in this department, as Logitech have managed to squeeze a sixth programmable button into the mix here, opting for one DPI button and cramming in another two beside the main left clicker. While a lot will depend on whether you foresee yourself using said sixth button, it does technically make the G502 Hero slightly better value for money overall compared to the M65 RGB Elite.

Still, for some, it won't matter whether the M65 RGB Elite has one less button or not, as its plainer looks may well be enough for it to win the day. After all, there's nothing really wrong with this Corsair mouse (apart from the lack of weight case), and I'm sure you'd probably enjoy it just as much as the Logitech G502 Hero. If, however, in hindsight the idea of fiddling about with tiny little weights sounds like too much of a hassle, then I'd recommend side-stepping the M65 RGB Elite and going for Corsair's Ironclaw RGB instead. It costs around the same, sits right in the middle of the M65 RGB Elite's weight range and is even comfier to use on a daily basis.