There's no point going all in on LED motherboards, coolers, graphics cards - you name it - when you don't have the right case that can show it all off. But why stop at components in your quest for the perfect RGB mega show? Why not get a full RGB case as well for maximum rainbow-osity? Enter the Cougar Panzer EVO RGB, which comes with four tempered glass covers and loads of space for building your RGB super rig.

Due to hit stores in around two weeks time for $219 (that's around $50 more than Cougar's Panzer EVO LED case), the Panzer EVO RGB is Cougar's very first RGB case. Not only does it come with four RGB Vortex fans in the case itself, but it also supports up to eight Cougar RGB fans (i.e.: another four on top of the ones that come pre-installed) and four Cougar RGB LED strips thanks to its built-in Cougar Core box.

You don't even need to faff around with extra software, either, as the Panzer EVO RGB comes with a driver-free remote control that lets you start taking advantage of its 100+ lighting effects straight off the bat.

The Panzer EVO RGB isn't just about LEDs, though, as this full tower comes with plenty of support for all sorts of motherboards - from mini-ITX all the way up to E-ATX (or extended ATX) motherboards up to 12in x 11in - as well as up to four graphics cards measuring a maximum of 390mm in length, and loads of space for SSDs and HDDs alike. You'll also find a USB 3.1 Gen 2 Type-C port on the front of the case, next to two USB 3.0 ports, one USB 2.0 port, a microphone and audio output and a fan controller button. 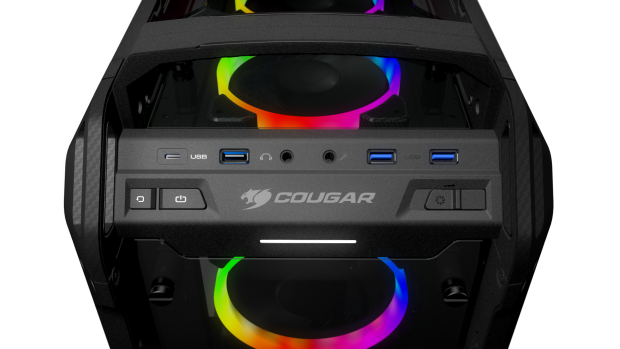 Cougar hasn't skimped on the Panzer EVO RGB's cooling options either, as there's room to fit up to four radiators in total. Behind the front and top covers, you get 360mm of room to play with, while the rear gives you space for a 120mm long cooler and the bottom up to 140mm.

UK pricing and availability has yet to be confirmed, but given that the LED version of Cougar's Panzer EVO is readily available to buy for around £155, I'd hazard a guess that the Panzer EVO RGB will likely cost around £200 with a release date following along shortly after it comes out in the US.