If you click on a link and make a purchase we may receive a small commission. Read our editorial policy.
Developer: Onion Games
Publisher: Onion Games

Not liking a cute puzzler like Dandy Dungeon: Legend Of Brave Yamada is a bit like staring at a puppy with cold indifference. Puppies are great, conceptually. There is no other way to buy unconditional love. But puppies are flawed. Liking them means looking past their annoyances, finding their embarrassments endearing, and putting in a lot of hard work.

I find DD's dungeons more dreary than dandy, but perhaps they're built for people with more patience. Or at least people who like the jokes more.

Meet Yamada-kun, a man of irrepressible enthusiasm and whimsical life choices. He spends all day programming in his pants, coding a game with himself as its hero. You play Yamada's game as he builds it, gradually adding levels, complexity, and faff. The plot progresses as you level up Yamada's development skills, often by running through old dungeons. It's not long before you're fired from your job at an evil and colossal video game studio, and immediately they set about stealing your work.

It's neat framing, and not without charm. I like how Yamada's clothes disintegrate as he transitions from heroic videogame Yamada into lonely bedroom Yamada, who's pining after the next door neighbour he's fallen in love with. He has also, somewhat creepily, programmed her into his game as a Mario-esque princess in distress. That's played as satire, with Yamada convincing himself that the path to his neighbour's heart lies in defeating pretend monsters as he invents them. The screen gets swamped in flowers whenever she pops by. It's a whole thing, and comes across as silly and self-aware, rather than as abuse of a trope. 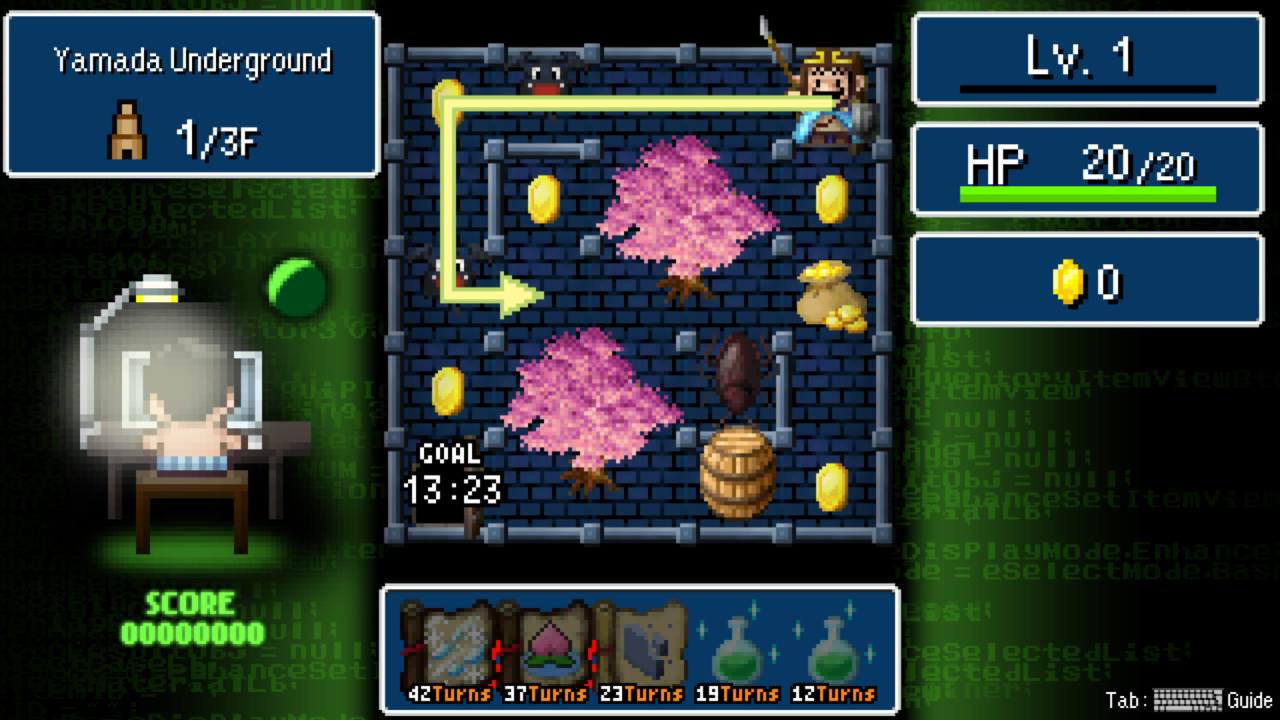 I couldn't bear to say this to his face, but Yamada's game is so much worse than it could be. You traipse through small dungeons, split up into levels that each take less than a minute. The goal is to draw a path from start to finish, bashing down monsters while popping health potions and spells. You get a bonus if you manage to walk over every tile, which is complicated by how they fall away once you tread on them. Figuring out how to do this forms the brunt of the game. Maybe 90% of my brainpower went into plotting out perfect routes, ignoring the monsters and focusing on the real constraints: walls.

That's the big problem. The monsters should matter, but they don't. You're supposed to manoeuvre around their capabilities, avoiding ranged attacks, prioritising different threats. For the most part, though, I simply didn't need to. I survived through using items, timing health potions around health-granting mid-stage level ups, and popping the odd magic scroll when I needed to. This doesn't demand much thought. It's bad at making you feel clever, and if a puzzle game doesn't make me feel clever when I succeed (or at least stupid when I don't), then it has failed as a puzzle game. 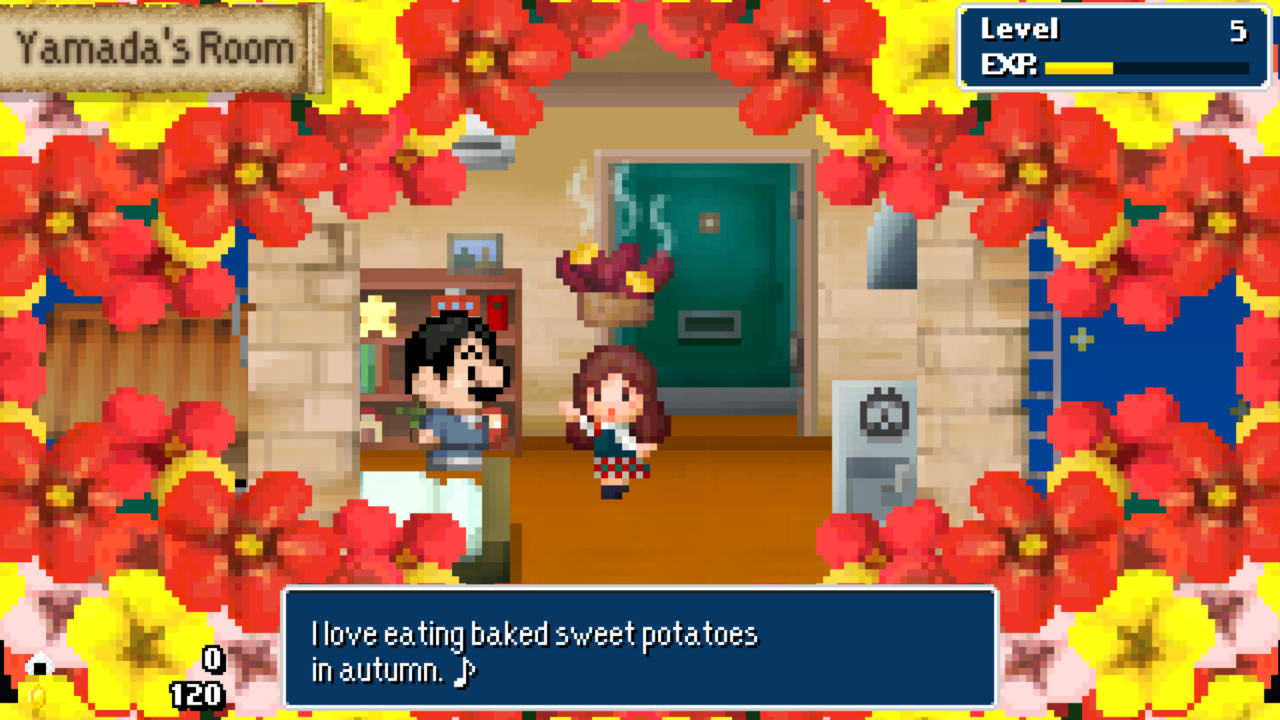 There is a potential version of this that works. One that isn't structured around those perfect routes through each level, and instead demands you pay attention to their occupants. It wouldn't even need any new ideas! There are already enemies that attack from afar, enemies that summon buddies, enemies that heal or, um, oil their friends. They could be woven into an intricate web that you need to carefully pick your way past, rather than a cobweb you can storm through.

Yamada also has access to a range of abilities, gained through equipping items between runs, but they mostly feel as redundant as the monsters. And as frustratingly close to working. I can put on a chef's outfit and get a knockback attack, for example, and it's crying out for me to construct paths around its use, letting me kick tough enemies into the void. But there's simply no need. I'd like to see every level through the lens of abilities like that, as I would with Into The Breach or Desktop Dungeons, but I'm six hours in to DD and it's yet to happen. 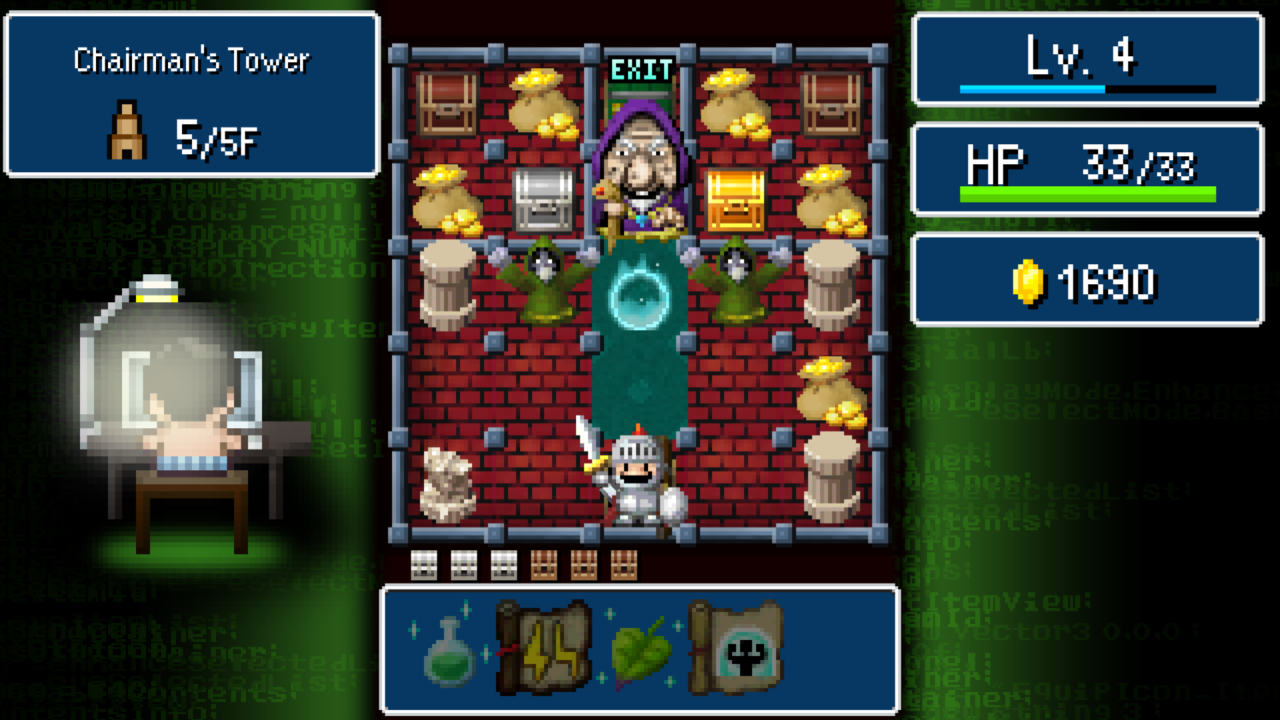 If DD forced me forward, giving me new threats to reckon with each time I cleared a dungeon, I would still find it repetitive. The fact that I literally have to repeat old levels makes me want to tear my hair out. The grind comes baked in: not only do you need to repeat old dungeons to unlock new ones, there are also recurring mini-bosses with powerful items you'll want. Those are at the end of particularly long dungeons, and only have a chance of dropping said items. If you're unlucky in the virtual coin toss, you're in for yet more repetition. They don't care about your time. It's infuriating.

This all sucks, because that unsatisfying core is wrapped up in offbeat, often surprising presentation. You never see outside of Yamada's apartment, for example, but he gets a cavalcade of visitors. There are bosses from the evil and colossal video game studio that fires you at the start of the game, who even have their own evil song, sung to the tune of Frère Jacques. Your mum posts you bonus levels, somehow. I once opened the door to a pig.

It's amusing, but also counter-intuitively tame. There's a tendency to lean on repeated formats, propping up jokes with formulas that give diminishing returns. I chuckled the first time Yamada flat out ignored a starving adventurer who'd just given him a new development idea, smiled the second time, and was nonplussed by the third. 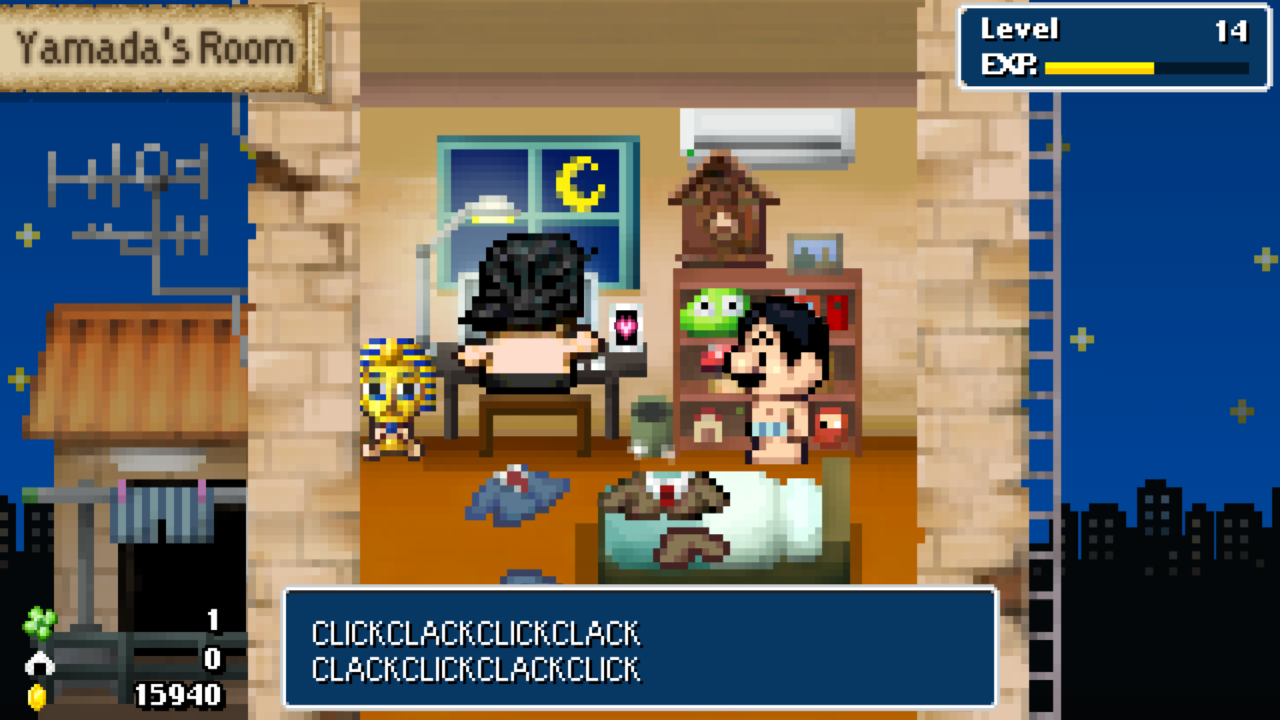 Ultimately, even if more of the jokes had landed, they wouldn't have been enough to carry the game they're crushed under. I'm aware that repetition in games gets rubbed in by playing long stints for review. Perhaps it all would have been less tiresome if I'd experienced it in the small bursts the original mobile version of DD was designed for. But repetition in general isn't good game design. It needs to be spiced up with novelty or thought, and the actual dungeons of Dandy Dungeon don't pack enough of either.

It's got heart, that puppy, but it needs more brains.