Premature Evaluation is the weekly column in which we explore the wilds of early access. This week, Fraser is trying to put on a good show in chilly Canadian battle royale romp, Darwin Project. Are you not entertained?

I want every game to be good, but I confess that I was ready to hate Darwin Project. See, it’s unashamedly a game for streamers and their hungry audiences. Even the main menu, where the ability to link your Twitch or Mixer account is the most prominent option, makes this abundantly clear. Audience participation is built into the very fabric of the game, to the point where players become entertainers. Colour me surprised, then, that not only do I like it, I like it in part because of its pandering to video boys and girls. 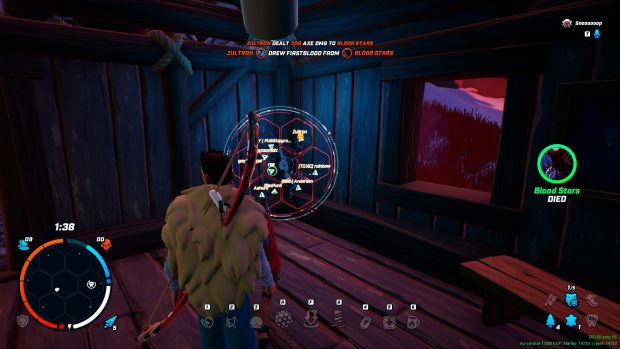 The cartoony schtick might call to mind Fortnite, but Darwin Project is a lot closer to The Culling. There’s the game show conceit, for one, and even fewer players (the single available mode pits 10 players against each other), and then there’s the focus on laying traps and crafting. It’s very much its own thing, however, and shakes up the burgeoning genre..

At the start of a match, all of the players randomly spawn near some resources, and from there they must hunt each other down using their bow, axe and any traps they can scrape together. There’s a surprising dearth of ways to actually kill your enemy, and fights always devolve into a wild, flailing jumping match where nobody comes out looking good. Battles can still be unexpectedly entertaining, however, and that’s mostly down to the Director. 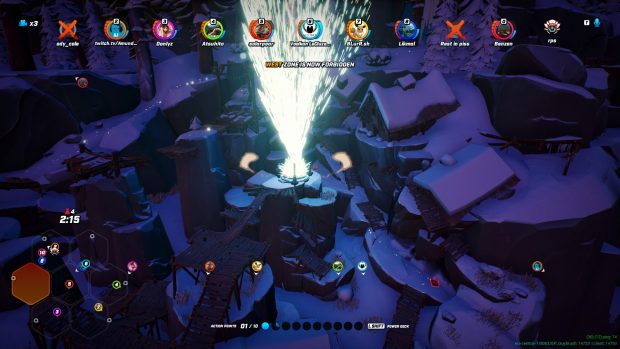 This is Darwin Project’s hook, and boy is it a good one. Every match has an 11th player, flitting around the battlefield in the shape of an omnipresent drone. The Director can go anywhere and follow anyone at the touch of a button, essentially becoming the ultimate spectator, but they can also guide the flow of a battle with an assortment of powerful abilities.

As the Director, I clocked one player doing an awfully good job. The sprawling, complex map means most players look completely lost, but this one knew what they were doing. After seeing them get a few kills under their belt, I decided to make things interesting. I put a target on their back and tried to get the rest of the players to hunt them down in the hopes of winning some prizes, and then to balance out the fight, I gave my victim temporary invincibility, giving them a fighting chance. 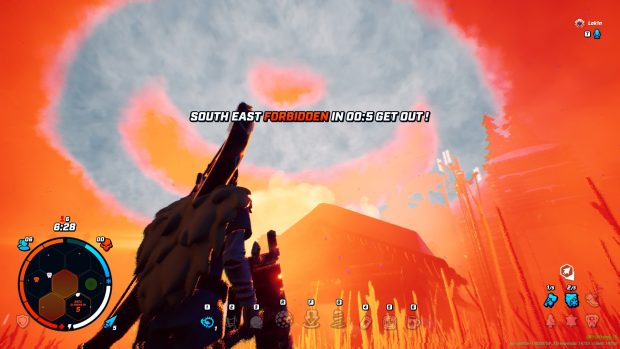 Director’s can heal and warm up players (cold is a killer and there isn’t always time to craft a fire), lock down zones so everyone has to flee, create gravity storms that allow players to leap like The Hulk (or get knocked all the way across the map with a single arrow), and even launch a nuke that kills everyone in the zone. They can play favourites, send players messages, disrupt fights and generate conflict, and even a bad Director can spice things up considerably.

Twitch adds a whole new level to this. Viewers can vote on their favourite players, make suggestions to the Director and essentially participate in the game. And as I meddled (and muddled) my way through my first stint as the Director, I started to wish I had an audience to enjoy this with me. I wouldn’t go so far as to say that I had a revelation, but I certainly get the appeal in this instance. 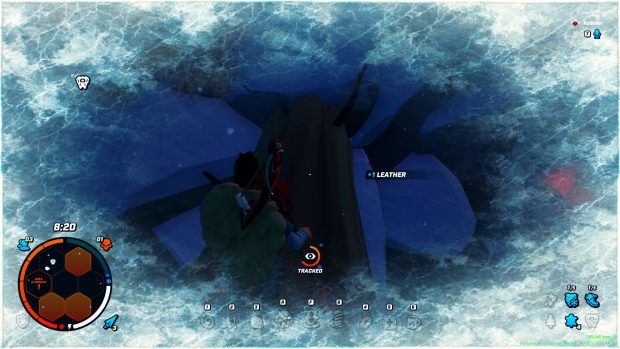 My initial worry was that this would force players, specifically the players fighting, to dance for their supper, attempting to entertain an invisible audience that they’re not even interacting with. If you put on a good show, maybe they’ll demand that the Director keeps you alive. This can happen, but it’s… kind of great? The game show conceit means that the convict you’re playing as is doing exactly that, anyway, Darwin Project just makes it less abstract.

This does mean, however, at least when you’re playing as the Director, that the absence of an audience leaves a big gap. Some of your abilities have a limited number of uses, and all of them cost action points that slowly recharge over the course of a game. If you’re playing solo, that means you’ll be spending a great deal of time just watching things unfold, unable to act. That’s time you can chat and plot with your audience, but when you don’t have one, it just gives you a lot of room to sulk. 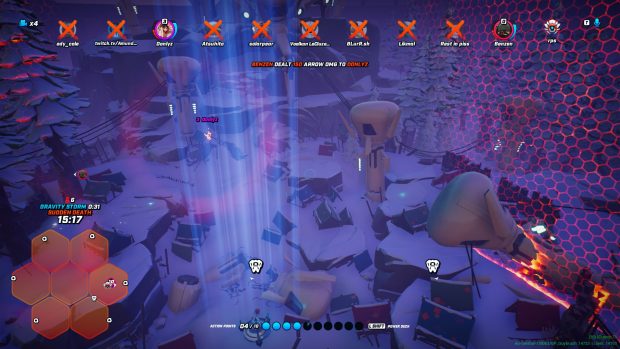 Given that the Director is neither an adversary or a participant, I’m not sure all of these limitations have a place, at least not if the concern is balance. Sure, there’s a lot of space for players to abuse Director powers, and certainly there are some powers, like the ability to lock down areas, that need restrictions, but right now it seems like the devs don’t trust their players. There are just too many times when there’s literally nothing you can do but sit there and watch other people play.

Less flashy than the Director role but still very important is Darwin Project’s tracking mechanic. In most battle royale affairs, you only know where a player is when you can see them, though gunshots and open doors can also give their position away. In Darwin Project, it’s much easier to find your quarry, as long as they’ve been doing a spot of gathering. 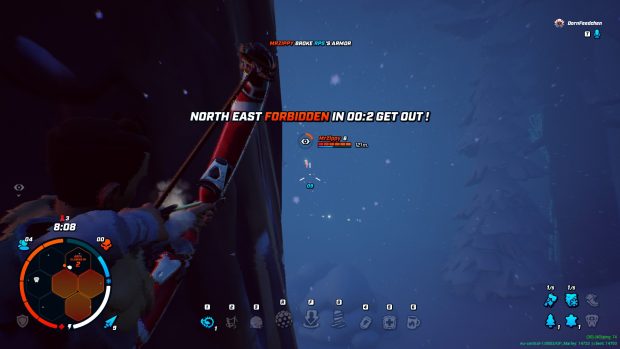 The frozen Canadian wilderness is littered with lots of furniture, trees and chests that can be harvested and looted. You’ll need those resources to craft fires, arrows and traps, as well as to upgrade your axe and cover yourself in warm, thick armour. But every tree you chop down and every chest you open is a sign that you’ve been in the area. By interacting with an open chest, for example, another player will see exactly where you are, though only temporarily.

It means you’re never really safe, and even the best hiding spot can be uncovered if someone has found a sofa you recently stripped, and even if they haven’t tracked you, fresh footprints in the snow can be followed. You can still run and hide, of course, and it’s the only reason I’ve ever survived until the end of the game, where the laser walls surrounding the final region start to close in, but tracking keeps everyone on their toes and moving. And it ensures that there are few lulls in the action, even with only 10 players. 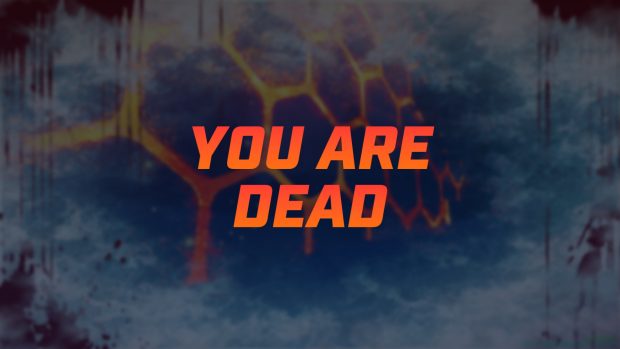 I don’t think I’m ready to move on from Fortnite, but Darwin Project is actually shaping up to be the more unpredictable and intriguing of the pair. It’s definitely lacking in the polish department, though, and its single mode doesn’t seem like the best way to enjoy the game. A duo mode with five teams of two is in the works, which I’m especially looking forward to as I hate playing battle royale games on my lonesome. I have nobody else to blame for my failures!