Death And Taxes is a fun little balancing act, reminiscent of Papers, Please. It doesn't quite reach the lofty heights of Lucas Pope's excellence in that border crossing simulator, but is nevertheless a good experience in its own right. You play as a newly created (and customisable) Grim Reaper, in a world where death is a bean-counting job in an office. You assign your ultimate judgement using a big marker pen and a magic fax machine. Hence the name of the game, right? Your boss is Fate, and he gives you quotas each day that you have to fill. Fate has a nice bow tie. But at the same time as all this, the people who live and die also have an effect on the world, and some of them are objectively worth less than others (and in the game?!).

It starts with the snow globe. In Death And Taxes you get wages and bonuses based on your performance, and you can save up to buy things from a shop in the office basement run by a skeletal pirate. Every time you buy something from him he tells a piratical tall tale about how he got it in the first place, usually involving a monster in the general taxonomic vicinity of a kraken, and at least one of his former compatriots dying. He is my favourite. (You'll actually have to play the game several times to see all the endings and buy all the geegaws, but the things you do buy roll over into new games). 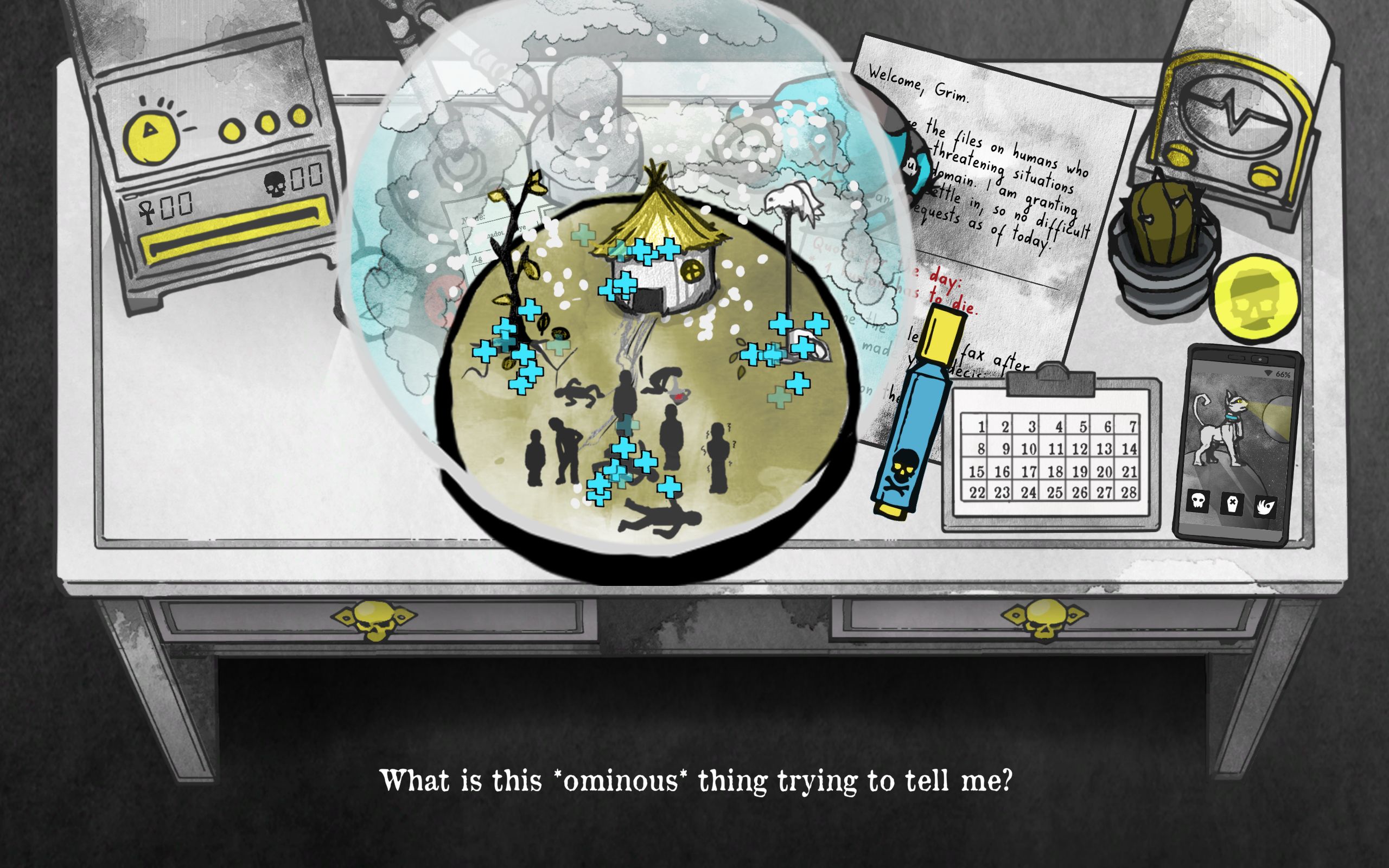 Anyway, gradually you realise that something is afoot and the world in general is on a bit of a downhill slope, despite your best efforts. One of the things that turns up in the shop is a little snow globe that shows the state of the world, based on four different parameters that I loosely thought of as "Peace" (a flag staff with a peace flag and a dove on it, which can raise or lower), "The Environment" (a tree that can either bloom or be totally on fire), "Global Health" (a group of people who can die or be attended by tiny doctors) and "The Economy??" (a building that can become a hut or a huge futuristic skyscraper). In practise this means stopping a bad war, an environmental apocalypse, a pandemic or total economic collapse from destroying the human race.

So once you have that, you start seeing little clouds of pluses or minuses appear around the flag and the tree and such as you kill someone or let them live. "Hmm," says you, "that smug bank-lord wanker being alive is great for the economy but worse for everything else." His continued existence is, then, a net loss for the world. Into the fax machine of death he goes. 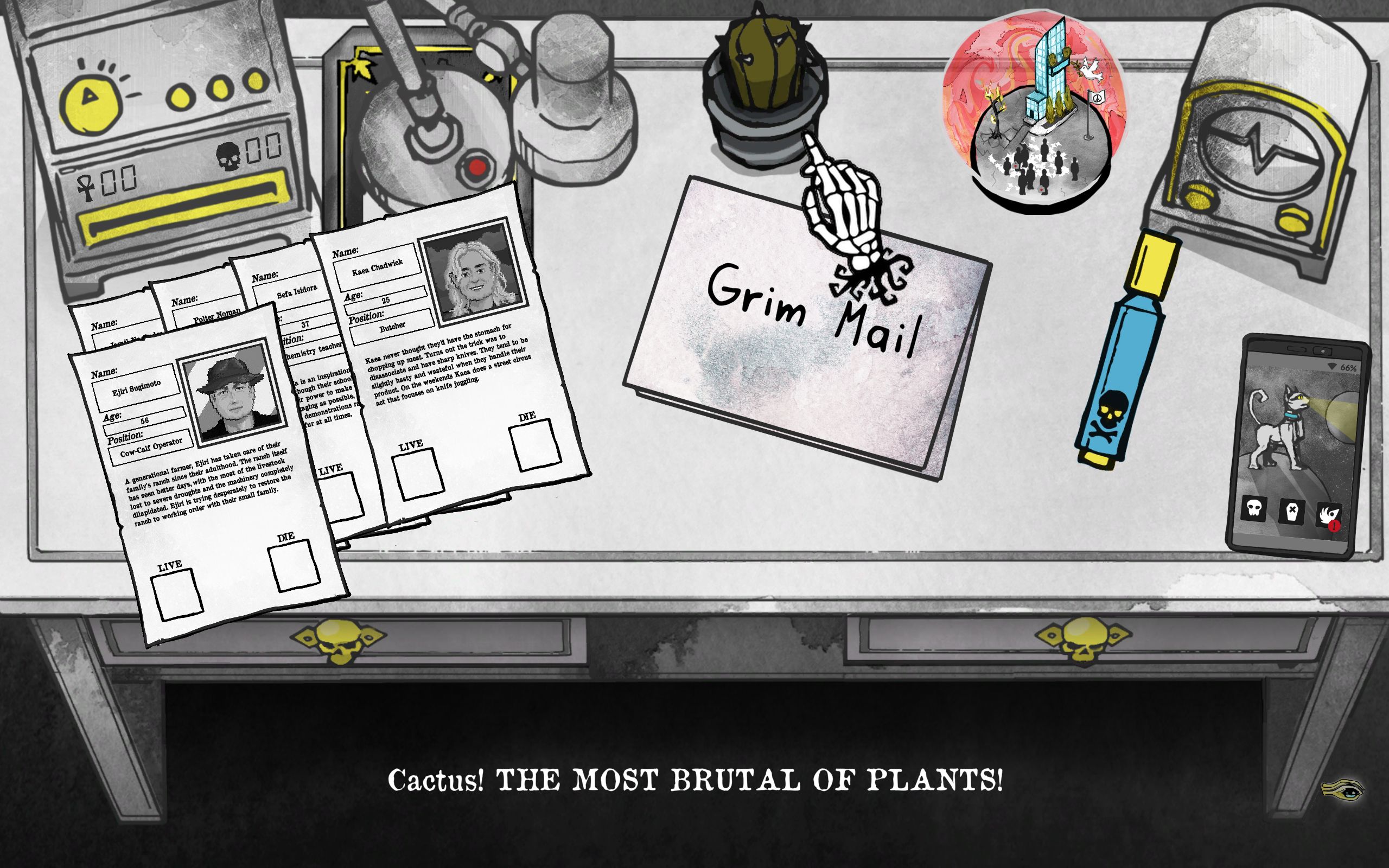 Then, later on, you can buy a lamp that shows the gain/loss ratio of any person if you hold their file under the light. So you can make your judgements on a factual, objective basis without reference to the little bit of text describing whether or not Gary the barista is nice to his cat or not.

Here's the thing I found fascinating: we probably all secretly do this anyway, to a greater or lesser degree, based on our subjective view of the world. In my case, I try to always keep in mind that everyone has worth by dint of being a living, breathing human being, and is thus deserving of at least some measure of respect and dignity. 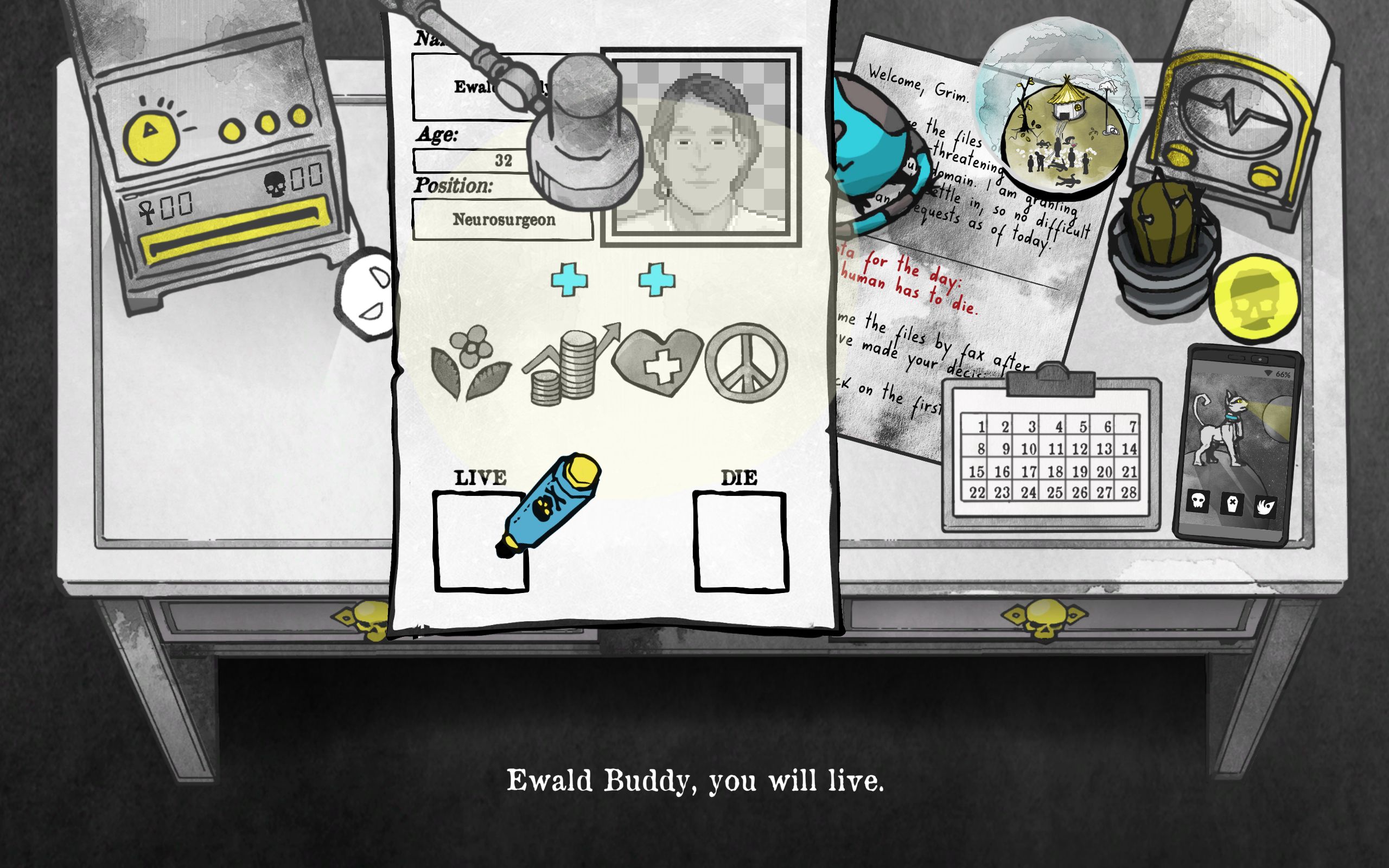 But then if I were, to create an example from nowhere, to look at a politician called something silly like Jeremy Smyth-Figg, who probably hums Land Of Hope And Glory while he wanks to offset the shame of touching himself, and as far as I can see cares not a jot for the respect and dignity of e.g. poor people, and has in my estimation made the world a worse place to live... wouldn't I love to hold his balance sheet under a magic light that told me it was okay to think that? That it doesn't matter if he loves his children or donates thousands to donkey sanctuaries, because the world would still be better off without him?

The way that Death And Taxes makes you think about death and the value of life - or, rather, allows you to observe yourself not thinking about it - is very interesting, and I enjoyed it a lot. It felt particularly apposite to the world right now, because there are some people in the game who are technically worthless. 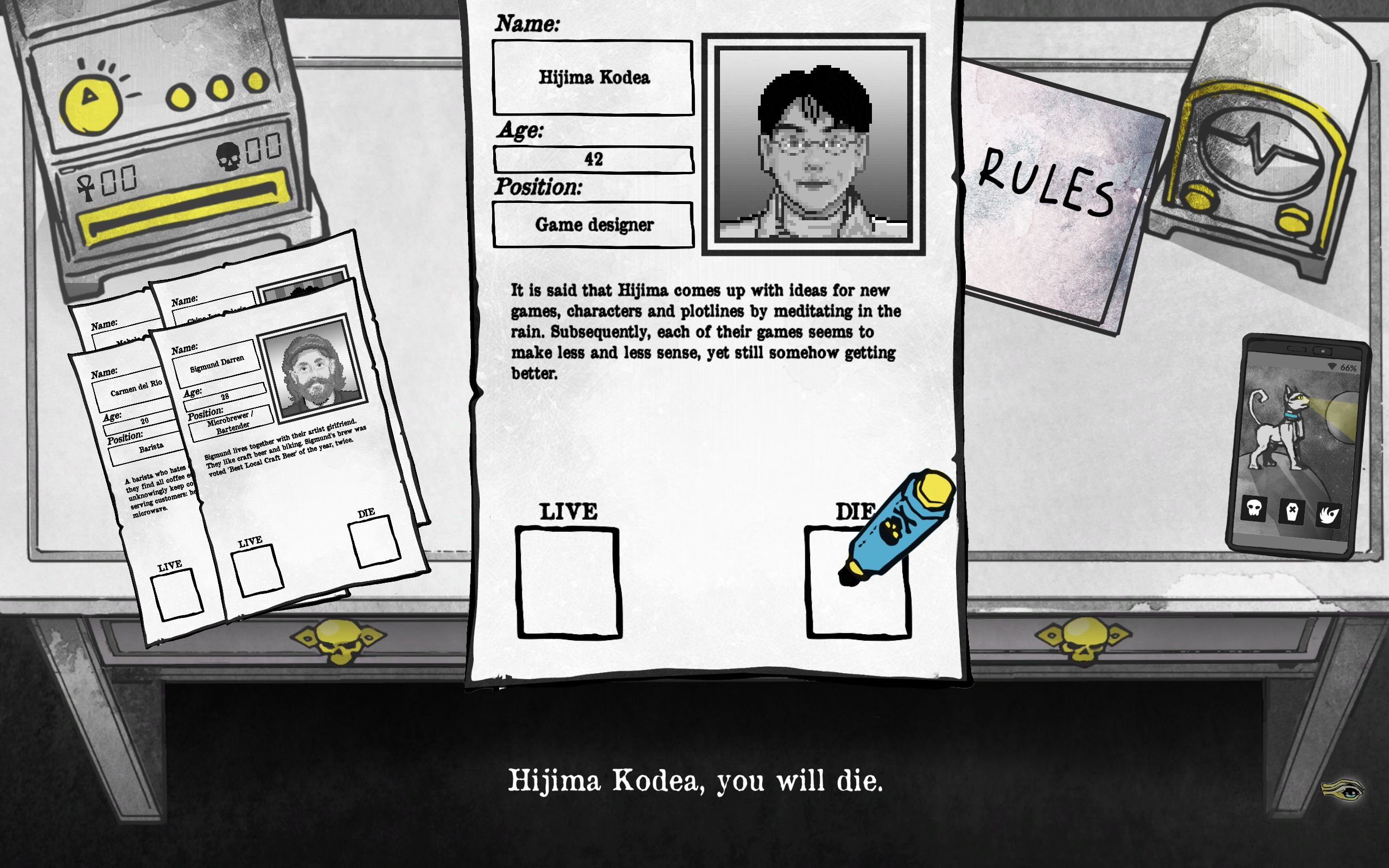 They don't take anything away by being allowed to live, but neither do they add anything. Their ledger is a perfect zero. Their life or death will have no effect on the world. In the game they're a useful sacrifice if you need to kill X number of people to meet your quota. You can swing the ol' metaphorical scythe at an elderly man in a home, with no friends and family left and no huge negatives or positives in his past, without a care. But nobody would really think that in real life as well, would they?

Death And Taxes is out now on Steam