If you click on a link and make a purchase we may receive a small commission. Read our editorial policy.
Developer: Snowhound Games
Publisher: 1C Company

I'm really not one for deck building games. I think it's primarily a matter of constantly feeling like I'm doing something wrong, always certain I should have a better selection of cards, that if I'd made a different choice I'd be having another experience... it's an anxiety-inducing way to play anything. So clearly I was unsure starting Deep Sky Derelicts, despite liking the sound of the premise. But woohoo, this is deck building for me!

You, that is your team of three mercenaries, are charged with exploring derelict spaceships on the outer boundaries of space, with the intention of gathering location data for a near-mythical ship said to be stuffed with valuable treasures. From the scavenger base you buy and sell loot, visit the medic, take on extra missions, and improve your gear, then launch off to abandoned starships to investigate.

Each ship is a unrevealed shape of square tiles, which you explore limited by a power resource. Movement costs power, as does combat, and indeed scanning to check if you're about to stumble into nearby danger or treasure. You must make sure you've always enough power left to return to a ship's exit points, while pushing your luck by exploring further, hoping to find valuable loot, strange characters with side quests, or the all important navigation data. And indeed to meet a large array of foes. 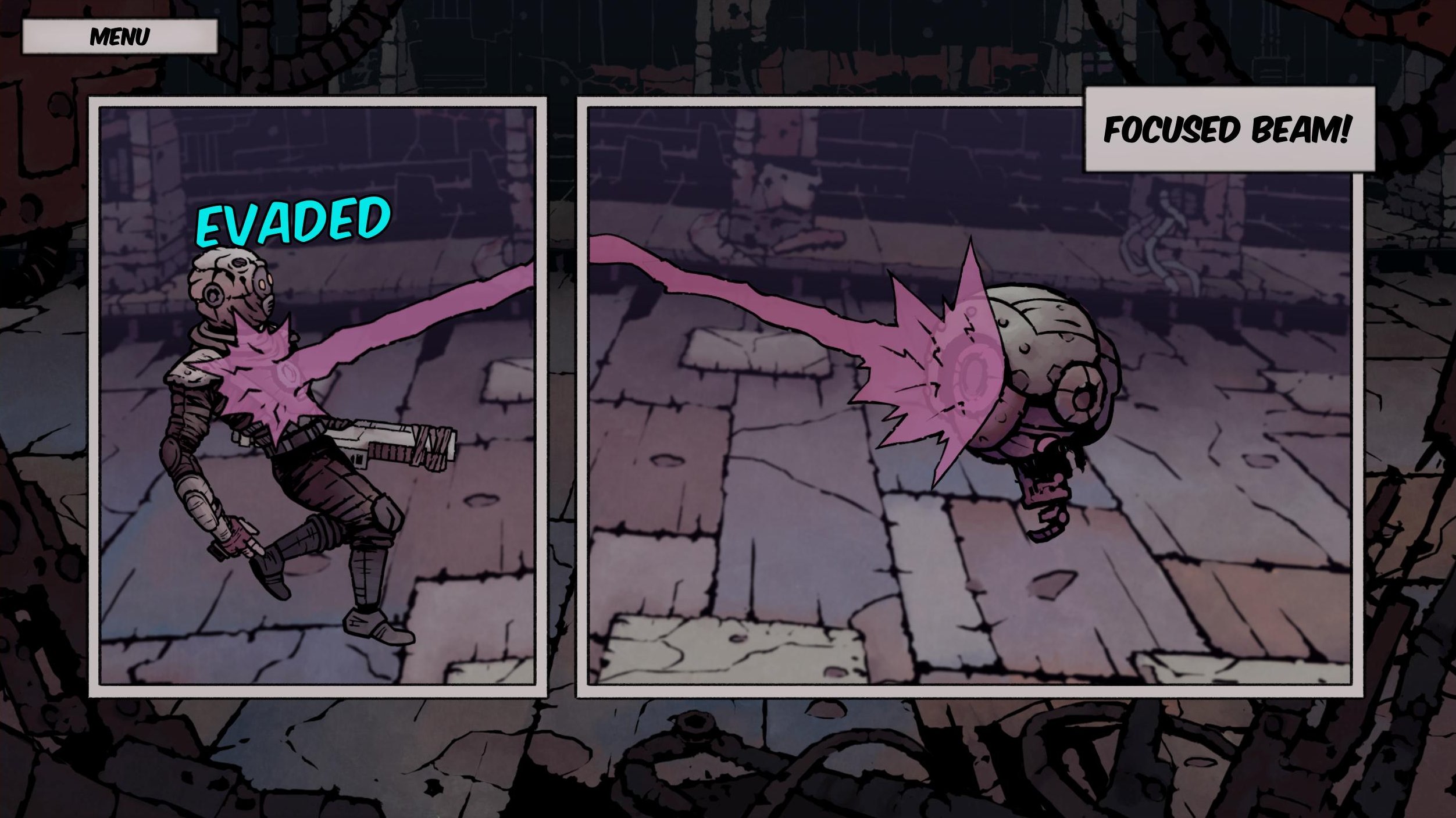 Combat is where your cards come in, with each character type able to choose from a range of weapons and tools, then mods (found or bought) for said items. Each comes with a card or seven that can be played by each character in the turn-based battles, perhaps letting you fire a volley of shots each a third of your weapon's total power, or a 100% power shot that also concusses, or a card that refills your shields, or one that buffs your companions, or one that... you get the idea. Each character's deck is randomly drawn from in battle, with various added abilities to change the chances of various draws along the way.

And this, for me, works splendidly! To me, cards chosen not by arbitrarily picking from a larger pool, but rather being a consequence of the items and mods currently equipped, feels far more understandable and accessible. I was in! The corollary being, to those who adore the min-maxing horror of proper deck-building strategy games, I suspect DSD is going to be colossally frustrating. 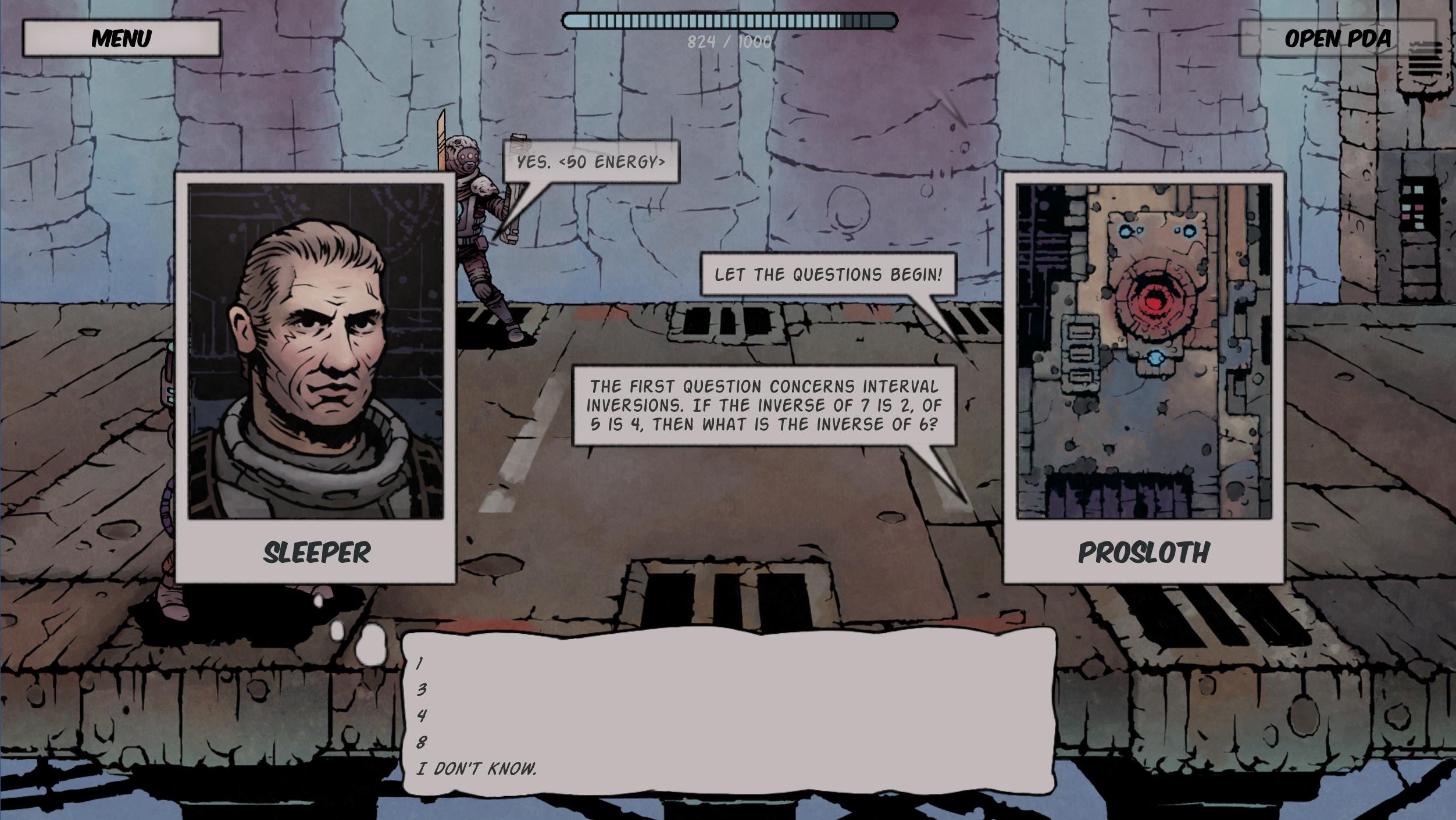 It still finds a few ways to be frustrating. Despite a stint in Early Access, this complete version still really lacks a good introduction for new players. In fact, this is all too often the case for Early Access games, ever-more developed for the community already playing them, forgetting the newbs who'll arrive for 1.0.

It introduces a few of the concepts on the scavenger base, but there's no introduction to how anything works once you're exploring a ship. Now, that's great when it comes to working out how exploration is done, what the consequences are, how you need to invest energy, and so on. Finding that stuff out on the fly feels rather the point. But it's just rubbish when it comes to fights. Most of it is reasonably deduced, playing cards to see the effects, but when I clicked an unlabelled back arrow to get out of a screen of info, and it turns out it was the "retreat" button, I wasn't enormously enamoured. Plus, with no first time tutorial for fights, it's a touch demoralising that the first set of enemies I encountered were literally twice as powerful as me. It doesn't help that messages pop up on screen and disappear before you can read them, sometimes containing vital information for a first-time player. I figured it all out, of course, but the lack of information up front feels too clumsy.

Once you've got the hang of it, it's great fun, never over-complicated (sorry again, min-maxers), and manipulating your deck with the choices of mods and weapons starts to feel very deliberate, matching up skills between characters for effective battling. It's always very satisfying to pick a Medic, and have them play in between your Leader and a Bruiser. Leader starts off with some debuffs against any foes with enough initiative to take a turn early in battle, then Medic sets up Bruiser with a two-turn adrenaline shot, then Bruiser unleashes two almighty attacks to make a proper dent in the enemy shields. Perhaps even take out one or two before the next round. And in that next round, now many some mind games from the Leader, have the Medic pacify one enemy to lower the volume of attack on their next turn, and have Bruiser bump his shields back up. And so on.

At the start you pick your team's skill types, but you can also buy in new mercenaries when you've enough cash, if you want to mix up your crew. 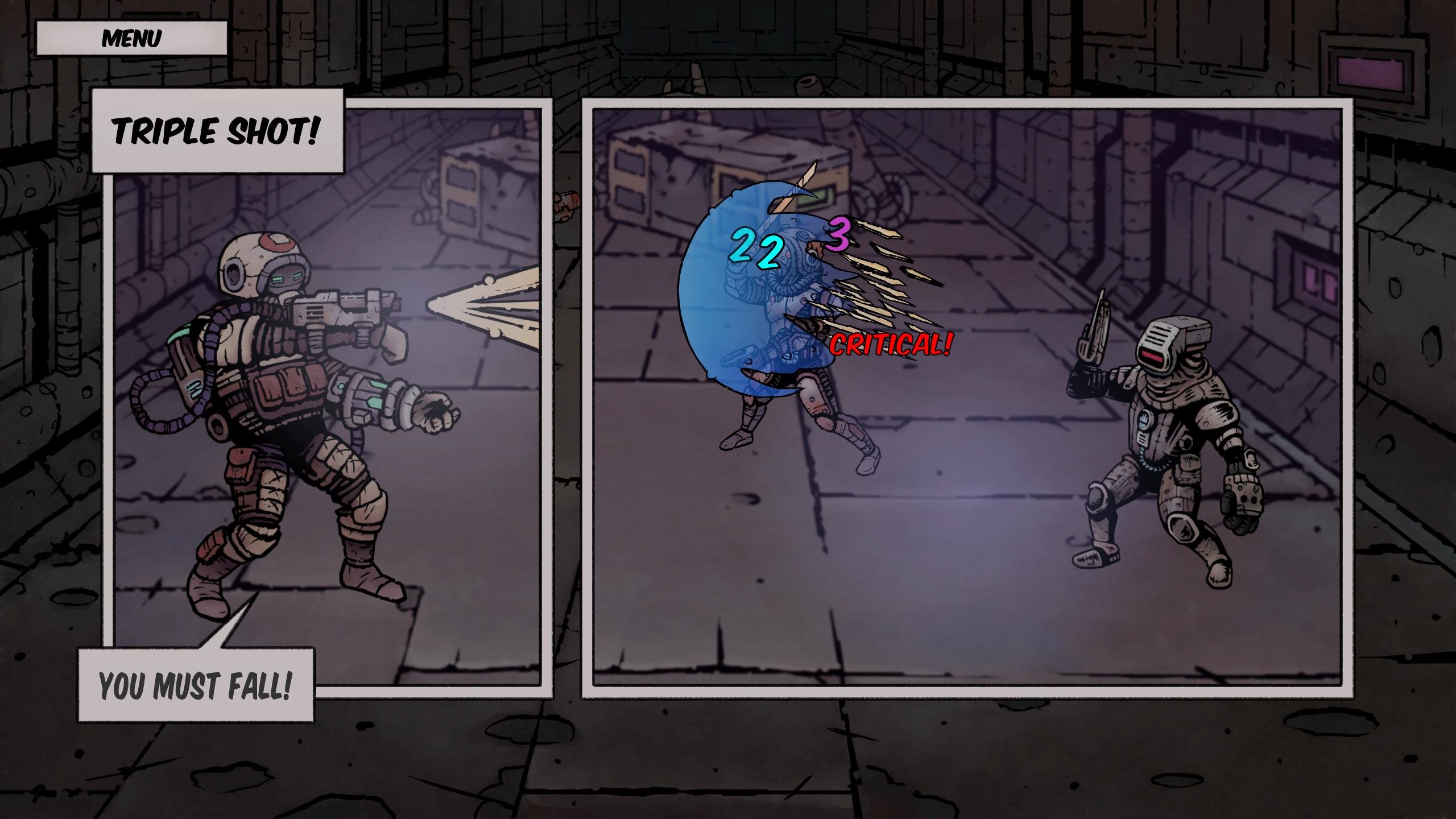 One of the more intriguing elements when it comes to the juggling of numbers and stats as you play is health. You have health and shield points for each character, the latter automatically refilling after fight, the former never getting any better even if you return to base. Instead you have to spend your very hard-earned coins at the medic. The real advantage of this is it forces you to play far more cautiously when you can't afford to improve matters - rather than just knowing you can always go back and get better, you instead have to venture out onto derelicts in the desperate hope of finding something valuable, then scarpering home, just to pay for a smidgen more health points for one of your character. During Early Access this all fell apart due to the woeful lack of cash available, but in the final version that appeared last night, this is seeming much improved.

Items found can be sold, but you will absolutely always need to spend a hefty chunk of it on resupplying your energy, and buying further energy canisters to be able to sensibly explore anywhere. Then you want to have enough left to spend on improving equipment. With four items per each of the three characters, plus two mods per item, that's 36 different items that need improving as you explore more difficult ships, and again if you played the early version, you'll be very relieved to learn it's now far more generous when it comes to drops. Buying weapons or mods new is now, as it should be, only necessary when you're after something very specific, rather than a necessity due to scarcity in the loot. 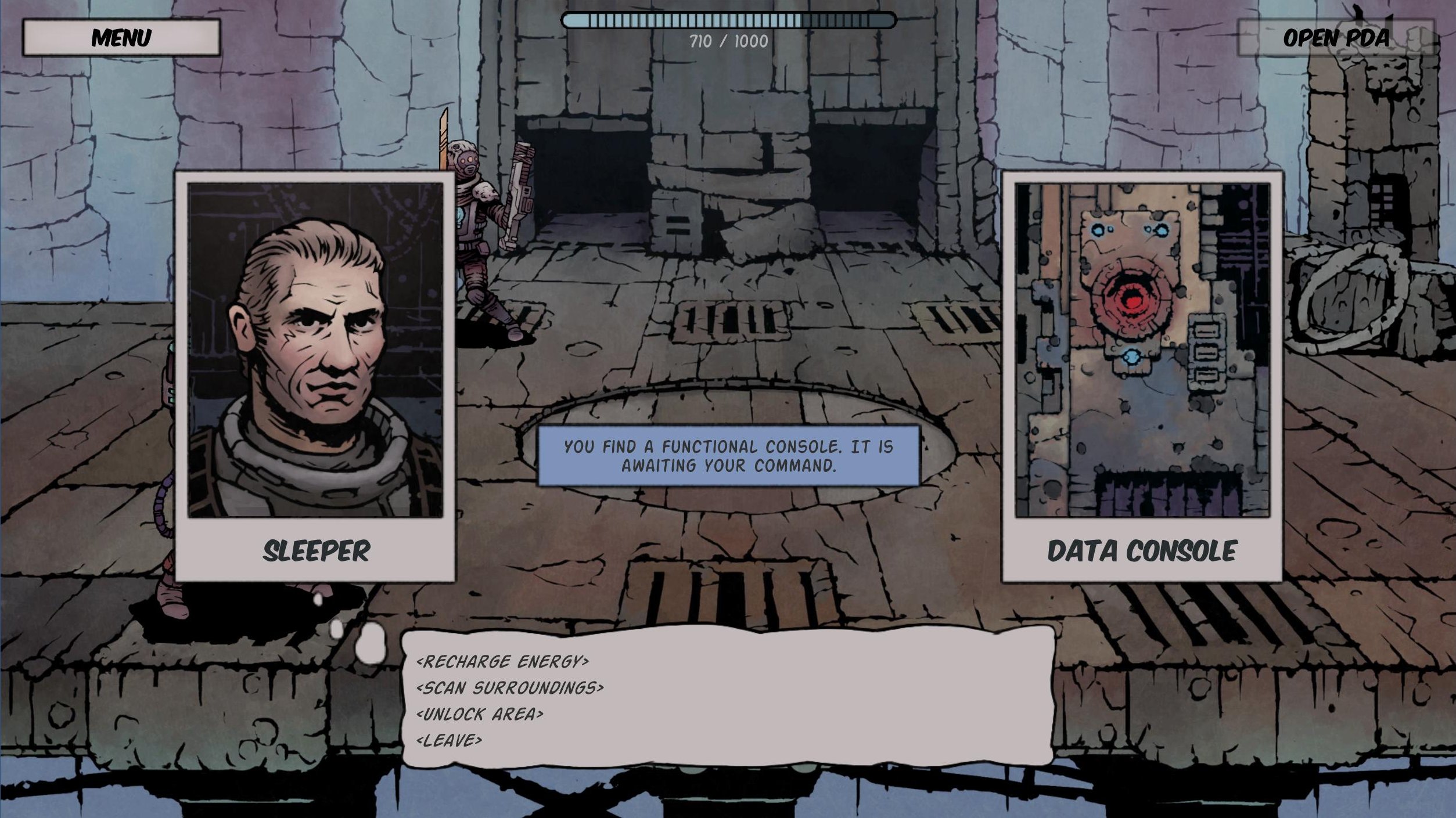 There are also now many more missions available from the mercenary Lair on the base, which means there are more money making opportunities, and importantly, more things to do than you might have previously found. And if you're brand new, then just be delighted we're running this version of this review, rather than the one I wrote yesterday!

It still feels like it needs a good deal more tweaking. Another oddity of combat is the complete lack of fanfare when you, or your enemy, gets a kill. It shows the pop-up static image for the attack, the points you've taken from them, but if defeated, when that image is gone, they're just not there. Not slumped to the floor, or melodramatically clutching chests and falling - just gone like they never were. It feels peculiar, wanting. The same is true for most elements, like cashing in a finished mission, or using an item in the inventory - there's no "moment" to it, no audio sting, no graphical representation. This is just aesthetics, of course, but they're noticeably lacking. 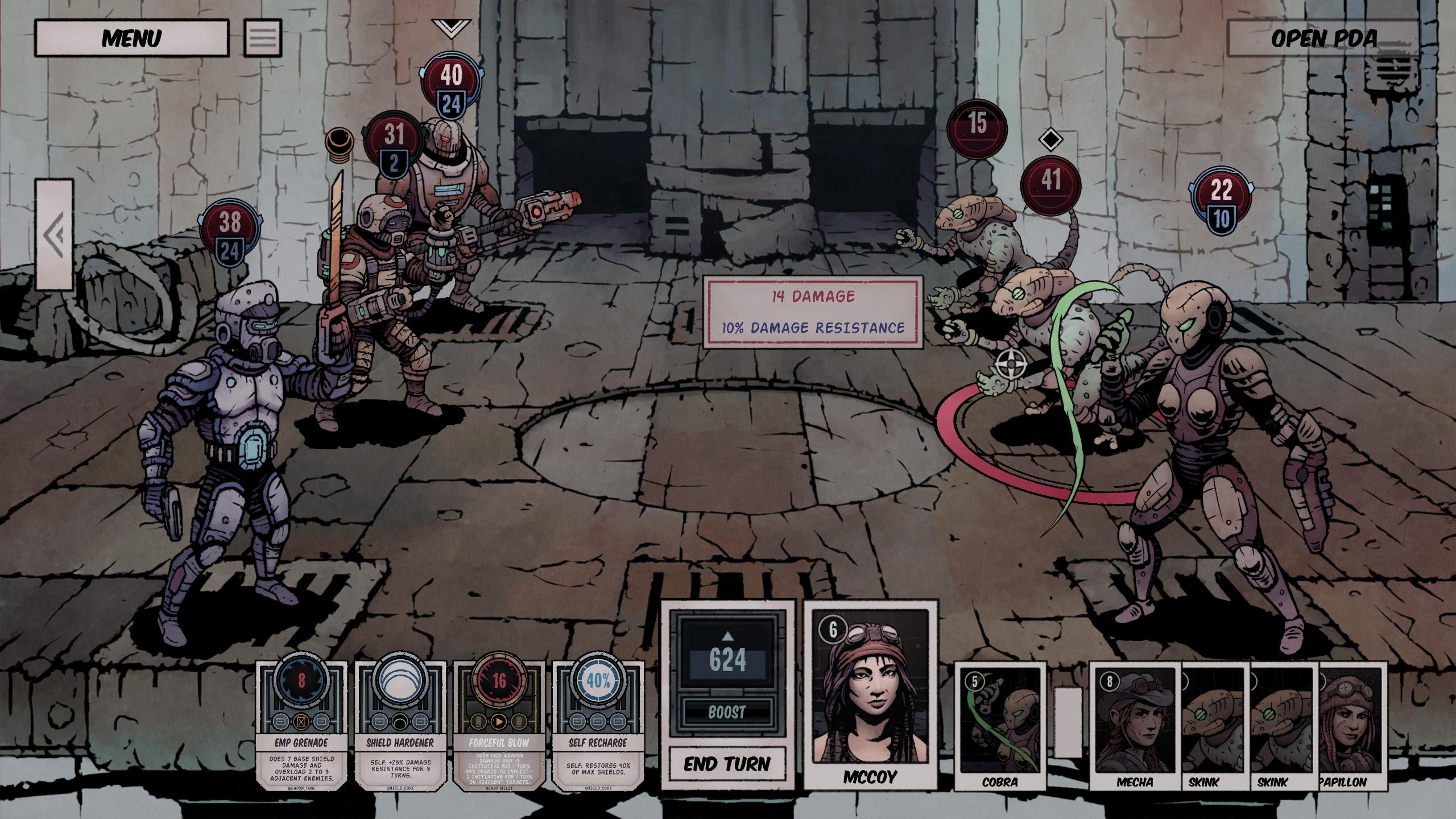 I'm really enjoying this. It's worth noting that I've not played as much of the final version as I'd like to, and it could still go wrong later on - I'll certainly be updating regarding that. But as it is, this is all rather fun. A tactical tile-based exploration game, with deck-based combat, and strategic elements, and yet for some reason all those terms that might normally put me off a game are winning me over here! It's certainly light, lacking the crazy depths of the genres from which it draws - in fact it feels like a game that would also work especially well on a phone. It turns out this is just what I wanted, and there's a good chance you might too.