Destiny 2's out on PC at last, and a whole red legion full of people are currently enjoying their first rides on its conveyor belt of deadly death. While, by and large, this seems to be a very well-done PC edition of a console shooter - and one that runs very well on minimum hardwware too - there are a few flies in Bungie's latest ointment that might give you pause if you're considering putting your Guardian hat on this close to launch. And I don't just mean the mystery bans. Below are a bunch of issues that make life a little harder than it ought to be, and suggestions for what to do about most of them.

Transcending first-world problems this one, but there is no cross-platform save or character support - i.e. if you've been playing on console and now want to hop over to where all the cool kids are at, you'll have to start a fresh campaign with a fresh Guardian. No progress, gear or anything else is carried over between platforms. On the face of things, it's a full-Picard facepalm move on Bungie's part, as it's going to actively dissuade people from picking up two copies of the game (e.g. people with different friends using different games-o-tron devices).

I can sympathise a little more if I think about it closely, though - too many mega-gods running about in the early days of Destiny 2 PC seems a tad unfair, while conversely the superior aim controls of mouse arguably gives you a way to progress more rapidly with a character you may ultimately plan to use on console. However, we're not talking about cross-platform play here, just sharing of data, so I still come down on thinking this is a silly oversight. Or perhaps a tricky technical hurdle. It may be that it's corrected in time, when there will be legions of well-established players on both console and PC - though I wouldnt' be terribly surprised if, were it to happen, it involved some nickle'n'diming on Activision-Blizzard's part. 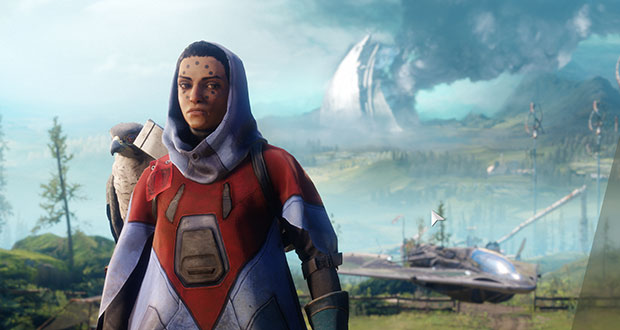 The anti-aliasing ain't great. You've a choice of FXAA or SMAA flavours of AA, both of which are relatively low-cost in terms of performance, but neither of which are hugely effective at stomping out the jaggies in this particular instance. A shame, as Destiny 2 presents some grand vistas (even if what you can do with 'em is extremely limited) and, on a crisp monitor with your face unhealthily close against it, the ol' staircase effect on edges - particularly of objects in the distance - does upset the party just a little. In my experience (on a GeForce card), the supposedly superior SMAA does very little compared to having AA off entirely, while the supposedly inferior FXAA does tone things down a little more but makes some detail seem softer. Manually forcing better anti-aliasing in NVIDIA settings hasn't worked either, though again I can't speak to AMD as I don't have a suitable card to hand right now.

To meaningfully get rid of the problem the only thing I've found to work so far is bumping up the render resolution to 130% or higher, which basically makes the game run at a higher resolution than your screen, but this takes a very heavy toll on framerate so I've not stuck with it. Perhaps an MSAA option will be added in time - this too can harm performance significantly, but it usually does the trick when it comes to jaggies.

Here're some comparison screenshots. Honestly, I don't normally do this sort of thing, but I found the aliasing particularly noticeable in this game - not an objection in principle, but rather that it was genuinely distracting given how lovely many of the environments are. These are all direct crops from a 3440x1440 image - no resizing or other tampering involved. I appreciate that, presented like this, it seems like nit-picking of one small part of the screen, but I'm merely using it as an example of stuff I'm noticing constantly. It's a shame in a pretty game, is all I'm saying - no tub-thumping here.

Screenshotting is hard work, due to Destiny 2 aggressively blocking many third-party applications as part of its anti-cheating measures. There's no built-in feature for it, Fraps isn't supported, neither is rigging the game up to launch via Steam and thus use its overlay, the Windows 10 Gamebar doesn't work in my experience, and even olde worlde print screen is highly temperamental depending on if you're playing on in fullscreen mode, borderless window and so forth. Something I was able to do was use NVIDIA's GeForce Experience application - something I usually avoid as it's got a whole load of bloat - to take screens, but two problems there. First is that the default Alt-F1 command unfortunately conflicts with F1 being hard-bound to the inventory screen in Destiny 2, so I just ended up with a load of that, but I was able to rebind the shortcut in GeForce Experience. Problem 2, less surmountable, is that folk with AMD cards or GeForces older than a GTX 660 are out of luck there.

There are two ways around this (also relevant if you prefer not to have GeForce Experience installed): Print Screen, but you may find that this only works in Windowed, Borderless Window, or Borderless Fullscreen, and by default it involves a great deal of manual faff pasting the image into an editing application. Some third-party applications, such as Dropbox, will automatically export a screen capture to file, however. A second option is freebie photo editing app Irfanview, which you can set keyboard shortcuts for (but not one-button ones, sadly) or set to automatically capture every few seconds - won't work in fullscreen mode, however. 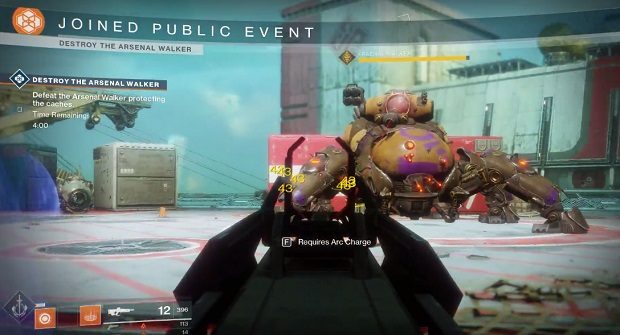 If you were hoping player-to-player communication options would be improved for the PC version of Destiny 2, prepare for disappointment. Despite this being essentially an MMO and one in which all the best stuff is designed to be played in a group, there's no public chat channel, no option to natter at players you encounter while out in the open and you're even pretty limited in your private communications with people you're not already friends with. This is a boon in that you're spared noise while running around very picturesque hub areas such as The Farm, but it makes forming groups or making friends a whole lot harder than you may be used to. This is a weirdly silent game. Expect out-of-game tools such as Discord to play a big part in solving the ol' LFG problem, unless Bungie have a change of heart. In-game for the time being, you're basically limited to mime options via the starkly-restricted Emote system.

With the above in mind, be very, very careful about what you use with the game. Though Bungie currently deny that some applications which use screen overlays, such as the aforementioned Discord, are responsible for the recent wave of mystery Destiny 2 account bans, there is some anecdotal correlation. Hopefully Bungie will explain the situation very soon, but in the meantime just do a quick bit of checking that nothing you habitually use with your games, such as OBS, is associated with any problems. Many are blocked due to anti-cheat-related fears about code modification, hence the screenshotting woes I mentioned, but in theory don't mean a ban - but do check, just in case.

On top of those, there are a few officially-recognised issues, which I'll quote Bungie verbatim on, but it's worth monitoring their official Destiny 2 support page, which is sporadically adding new problems/solutions:

• Fullscreen on Laptops: Fullscreen mode is unable to be selected on some laptops. Affected players may use Windowed Fullscreen mode to work around this issue.
• SSSE3 Required: Destiny 2 will not run on processors without Supplemental Streaming SIMD Extensions 3 (SSSE3).
PLEASE NOTE: We’ve seen a number of reports of crashes on CPUs that fall below our stated minimum specs (E.G. AMD Phenom II series). We are investigating the issue and will attempt to fix the crash, but these CPUs are below minimum spec and are not officially supported.
• TRUMPET Errors: Players who are encountering TRUMPET errors on PC may attempt to work around this issue by changing Blizzard Region. We are investigating.
• Clan Roster: We are aware of player reports describing the Clan Roster not appearing in Destiny 2 on PC. We are investigating this issue.
• Continuous Sign On: We are actively investigating reports of players blocked from signing in to Destiny 2.
• Windows Updates: Before playing Destiny 2 on PC, players should ensure that their version of Windows is up-to-date. The player experience may vary on versions of Windows that are not up-to-date.
• SLI, HDR, and VSYNC: Players may experience some rare issues when enabling SLI, HDR, or disabling VSYNC in some non-native resolutions. For the best experience, players are encouraged to use these features while running at their display’s maximum available resolution.
• Crash after Task Switching: The Destiny 2 client may crash after switching tasks (ALT+TAB) when AMD Crossfire is enabled. To avoid this issue, players should avoid switching tasks for extended periods of time when the AMD Crossfire feature is enabled.
• Saxophone Errors when Launching: Players may erroneously encounter Saxophone errors when launching the Destiny 2 application directly from the .exe file. Players who encounter this issue must close the application and relaunch through Blizzard’s Battle.net app.
• Idling to Title Screen: In some activities, players who are returned to the title screen due to idling may be unable to log back in. Players who encounter this issue must close and relaunch the Destiny 2 application.
• Login after Disconnects: A generic error code may appear to players who lose internet connection, which may block an affected player from logging back in even after reconnecting. Players who believe they are encountering this issue should close the Destiny 2 application and relaunch.
• Buffalo Errors on multiple PCs: Players may encounter Buffalo errors when logging in to Destiny 2 on multiple PCs at the same time. To prevent this issue, players must ensure that they are logged out of Destiny 2 on any PC that they do not currently intend to play on.
• Cursor in Tri-Monitor Configurations: Changing resolution between 5760x1080, 4080x768, and 3072x768 may trap the mouse cursor in the right-most monitor. Players who encounter this issue should ALT+TAB out of the Destiny 2 application, then back. Players may also toggle Windowed Mode by pressing ALT+ENTER.
• Tri-Monitor Depth of Field: DOF effects may be overly aggressive on some tri-monitor configurations. Players who encounter issues with DOF can disable this feature in the Graphics Settings.
• Windows 10 Game Bar: The Windows 10 game bar may not work in Fullscreen Mode. Affected players who wish to use this feature should use Windowed or Windowed Fullscreen Mode.
• NumPad Binding: Players are not able to bind controls to most NumPad keys.
• Screen Bounds on AZERTY Keyboards: Players may receive an incorrect key prompt when adjusting screen bounds on an AZERTY keyboard.
• IME in Fullscreen: Players who are running Input Method Editors may encounter a black screen or delay when inputting characters in Fullscreen Mode. For the best experience, these players are encouraged to play in Windowed or Windowed Fullscreen Modes.
• Closing Application: When closing Destiny 2 on PC, players must close the application via mouse input. Controllers cannot select the in-game button to close the Destiny 2 application.
• Corporate and University Networks: Some players may be unable to play Destiny 2 on corporate or university networks. Players who encounter this issue must contact their IT department, to meet the connectivity standards outlined in our url=https://www.bungie.net/en/Help/Troubleshoot?oid=13602#University]Network Troubleshooting Guide[/url].