Valve are starting to clearly disclose the odds of receiving a rare bonus wizard costume in your Dota 2 loot box of wizard hats, adding an in-game pop-up stating your chances. This is for the "escalating odds", which go up as you open more and more of a certain loot box, and will always track your current chances. The odds were vaguely available before in a roundabout way, as Chinese law requires companies to disclose loot box odds, but seeing it in-game is easier than tromping across the Internet in search of translations of Chinese blog posts.

The changes arrived this week as Valve added a new loot box, the Treasure Of The Carmine Cascade. "We've also taken this opportunity to simplify and rework the way we calculate escalating odds for this treasure and going forward," they said. So old boxes still work the old way, then new ones will use this system.

Dota 2's loot boxes largely work in a clear way. You can view each loot box's contents in a menu, worn by their characters so you see what they look like. You have an even chance of getting each of the regular items in each box, and the game won't give any duplicates until you've got them all. The tricky ones are the separate pool of bonus items which some loot boxes include as an extra roll. These items are only available by getting lucky, with the odds of hitting 'em going up as you open more of that box without getting it. Those are the odds laid bare by this change.

Escalating odds have been on rare items in some Dota loot boxes for years, but before we only knew vague escalating odds at certain intervals from translating those Chinese announcements. Now the precise odds of each bonus item will be visible by clicking the wee upwards arrow next to it. Like so: 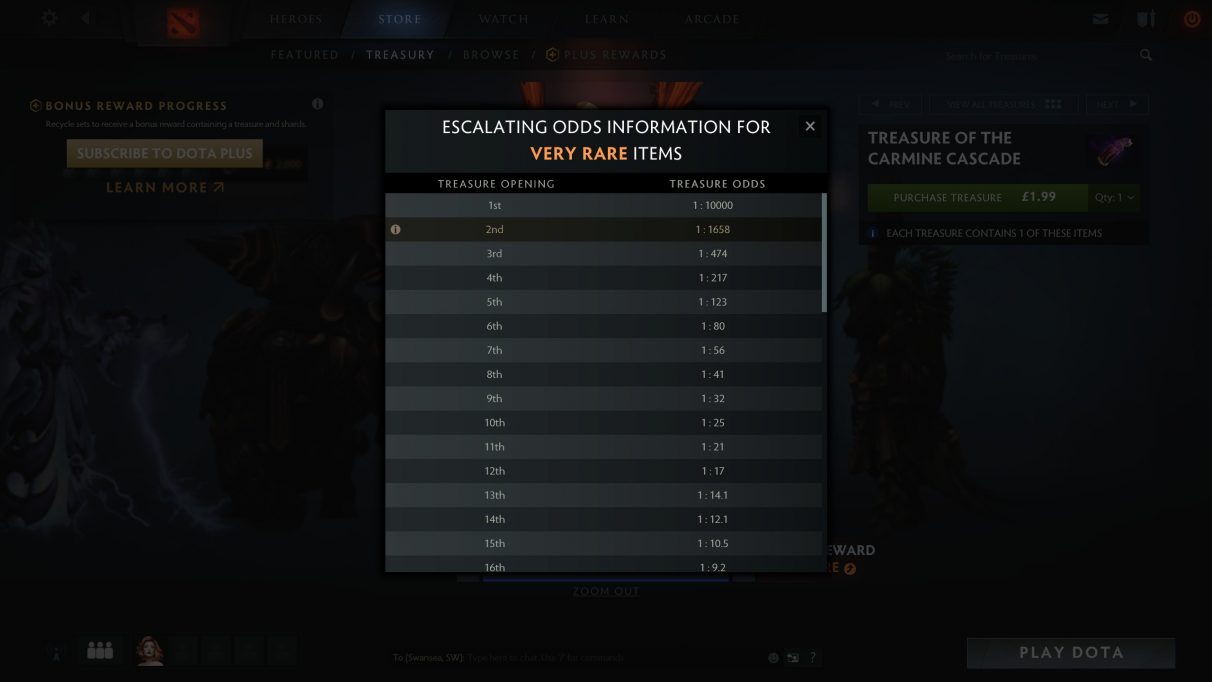 For example, the odds of getting Carmine Cascade's "rare" wizard costume start at 1:2000 with the first box then eventually reach 1:1 after opening 40. At the high end of this box, the "extremely rare" wizard costume, you're starting at 1:20,000 and capping out at 1:2.2 after 50. With the boxes costing £1.99 a pop, chasing the really fancy ones could cost a lot - and never guarantee you'll get 'em. Earlier loot boxes have included even higher rarities too, "ultra rare" and "cosmically rare".

Which is the point, really. That's the lure of the whole football sticker, baseball card, Kinder Egg sorta thing. Sure, you can get all the regular costumes relatively easily, but if you want those extra special ones other people are unlikely to have... well, you'll likely have to blow a bomb or buy them from lucky unboxers through the Steam Community Market, where Valve also take a cut.

On one hand, it's good that Valve are showing how ha-ha-hilariously unlikely it is you'll get the rarer wizard hats. On the other, odds of rare items escalating as people buy more and more loot boxes is pretty exploitative, and to show people exactly how their odds improve with each extra box seems worse. With visible escalating odds, each purchase is making progress towards something that still is decided by luck. That can fuel feelings that it'd be a waste to give up on chasing a rare item after putting money into improving odds of getting it - the 'sunk cost fallacy', the kids call it.

Ah, it's a shame. Dota 2's regular loot box items, while worse than just selling specific wizard hats in the in-game store, are relatively nice as loot boxes in free-to-play games go. Not giving duplicates is a nice touch, and one I wish more games would do. I'd often point to Dota as a good model for F2P, giving everyone all characters and mostly selling cosmetic bits, and it largely is still good. But the rares dropped into loot boxes do feel exploitative and... ah well.