I can go one of two ways with turn-based tactics games. Give me something like XCOM, where you’re thrown situations full of random variables and asked to make the best of them with inadequate resources, and I’ll go at it like John Henry, digging away in a doomed attempt to beat the machine. Give me something like Into The Breach, however, where there’s less element of chance and victory is achieved via careful planning and… well, I’ll love it. Until I realise I’m being tricked into enjoying chess, that is, at which point I’ll drop it like someone who’s found an eyelid in their burger.

That’s not a slam on Into The Breach. It’s a masterpiece of design, and my bouncing off it is more to do with my shortcomings than the game’s. My brain just happens to be fond of reactive improvisation and estimating risk, rather than methodical planning based on known quantities. Maybe you’re wired the other way. Regardless, I’m happy to say that Druidstone: the Secret of the Menhir Forest (the latest from the team behind Legend of Grimrock) does a bang-up job of catering to both mentalities. 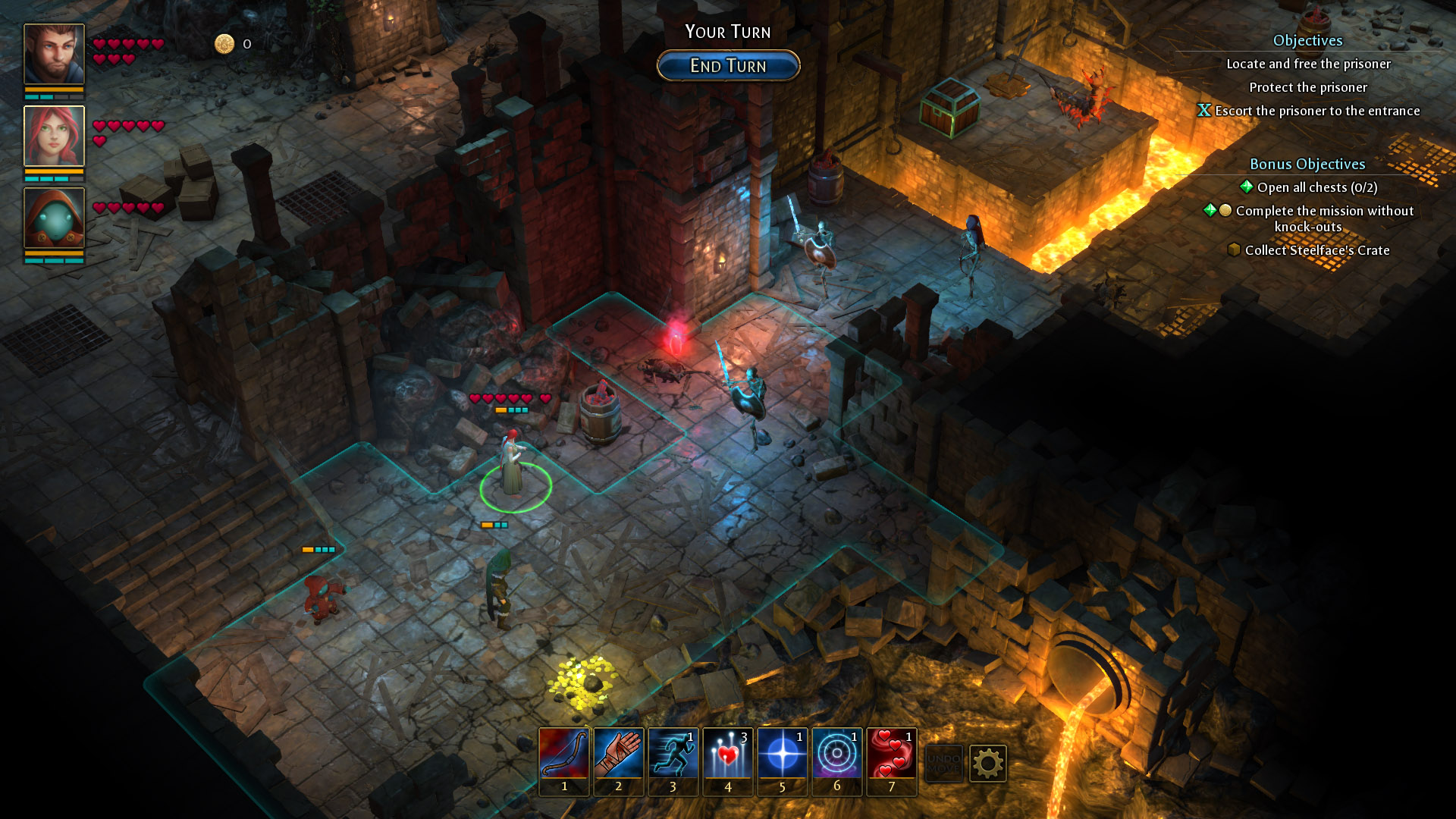 Druidstone is a turn-based fantasy tactics game, played on an isometric grid, across thirty-five carefully designed levels. You play as a party of three (four, later in the game), who can move and attack in any order you like during a single team turn, and who each have a roster of special abilities with finite uses per mission. There are many baddies (Skeletons! Slugs! Beastie Boys!), as well as an impressive array of different mission types and an assortment of interactive map furniture such as door-opening pressure pads, fire-shooting traps, and explodey barrels.

Completing missions wins gold and XP to build up character stats and buy weapons, while achieving more difficult optional objectives wins you extra gems, which you can use to improve party members’ powerful special abilities. You can complete missions as many times as you like in order to grind XP (you get less each time, mind), but you’ll only be able to bag the gem rewards for optional objectives once per mission. This will be important in a minute. 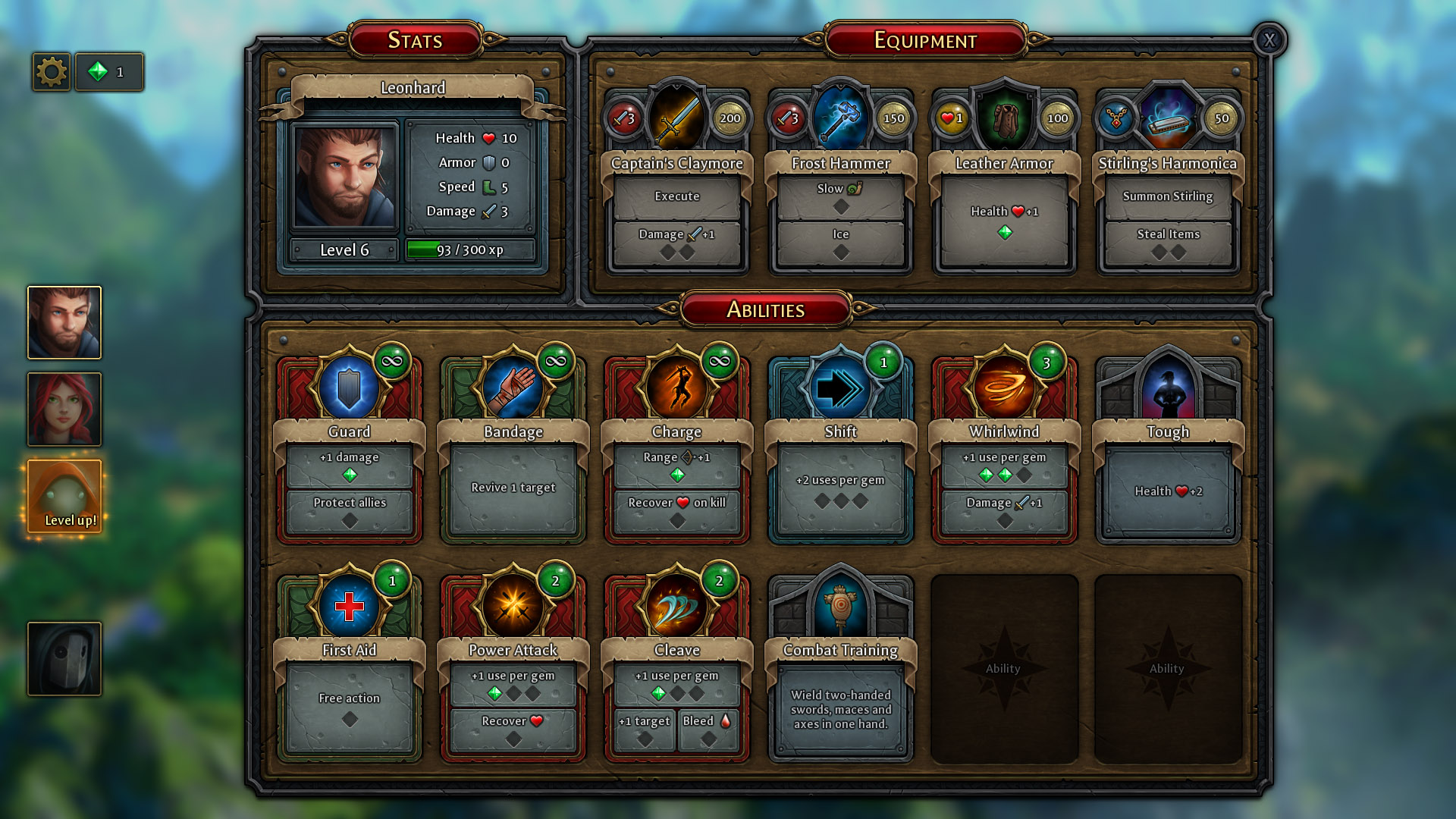 You see, when I was just a few levels into Druidstone, I was feeling a bit out of joint with it. It was exquisitely designed and doubtlessly good, but I had the increasing feeling that I was solving puzzles rather than improvising my way through an RNG shitshow; that each level had a single ‘solution’, which I was destined to discover through repetitive trial and error. Move the big man here, burn the whirlwind ability on those skeletons, then have the archer move there to take the last HP off the one still standing, and to be in range of the dogmen who I know will show up on turn three. Etc, etc.

This feeling hit me particularly during a level where you have to escort a befuddled naturalist away from two raging basilisks, which proceed to chase your party through the level. All I had to do was get the bastard out of the area, but I spent ages replaying the level because I wanted to do it perfectly - killing a basilisk and opening two out-of-the-way chests in order to get all the rewards. 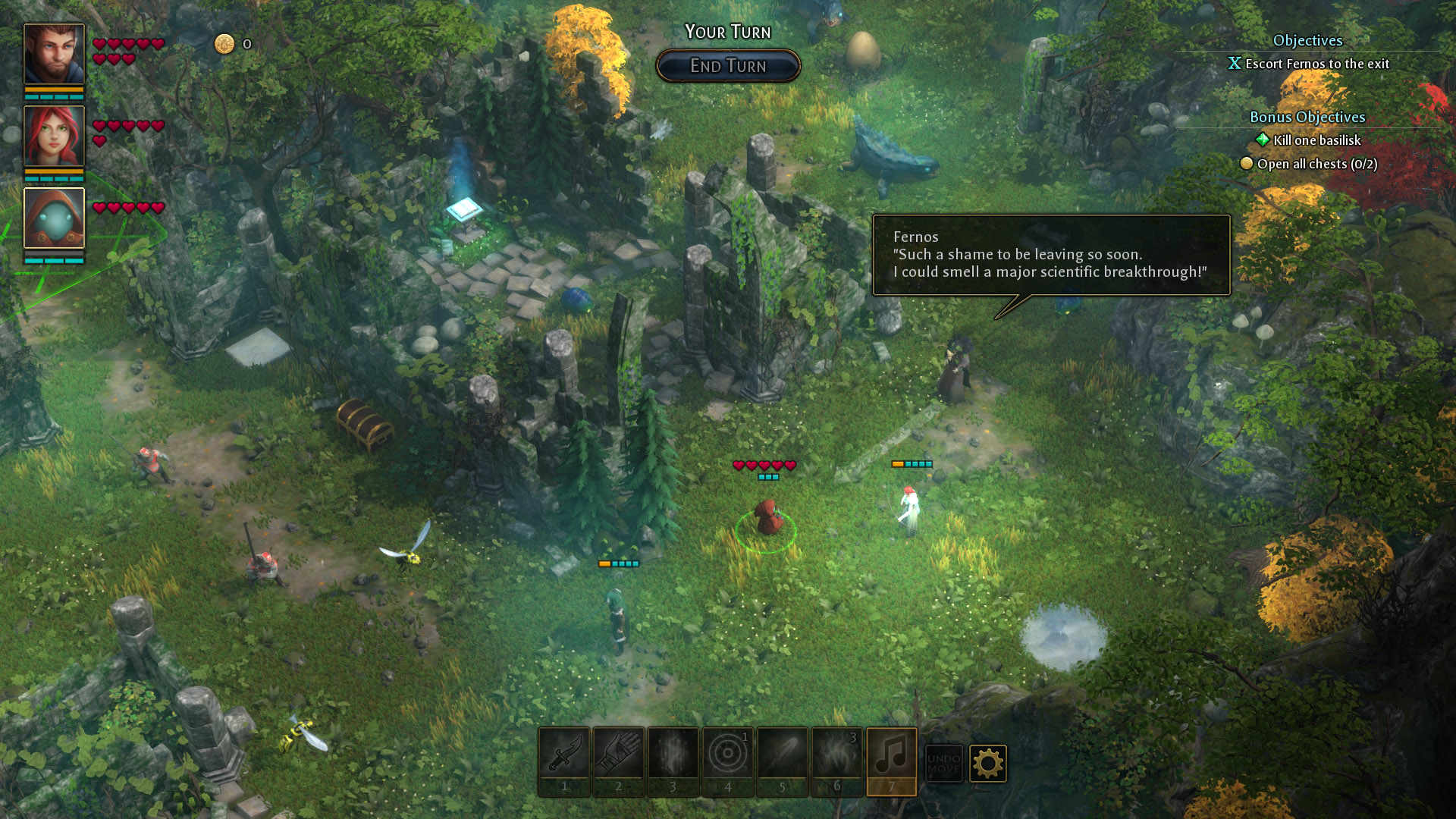 Even with all the repetition, it was still quite fun (and I imagine there would have been a lot less repetition if I was the sort of person clever and analytical enough to work it all out on the first try). But I was perhaps missing the point. Because while it’s completely legitimate to play Druidstone as this sort of plot-and-play puzzler, it’s also a game that’s designed to accommodate reckless, have-a-go dunces like me.

After the basilisk level, I started just having a bash at levels - not thinking too hard about them, and concentrating on meeting their baseline objectives. Sometimes, I got a “hole in one”, nailing it on the first go, and sometimes it took me two or three tries. Sometimes, I even hit all the bonus objectives while I was at it. But where I didn’t, I just moved on to other levels, beefed up my party with the XP and gold received, then came back later to do the optional objectives with a stronger team. 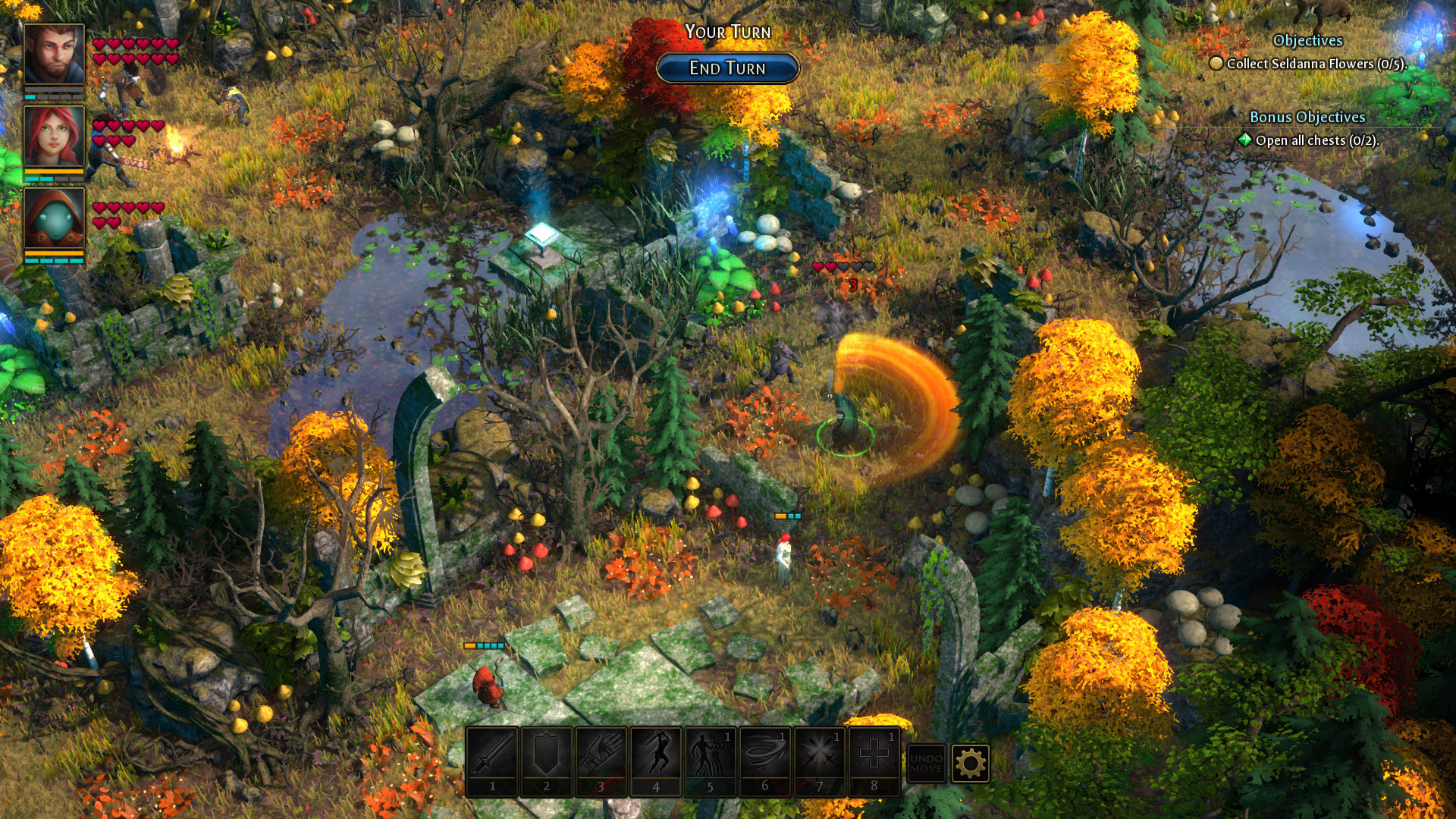 Playing this way, I never felt ‘stuck’, and could relax into enjoying the impressive variety of level design on offer - not to mention Druidstone’s beautifully oversaturated landscapes, its weirdly calming score, its simple-yet-charming story and its surprisingly entertaining dialogue. Admittedly the dialogue was particularly entertaining as I had called my main character "The Big Man", and his name prefixed every line of text he spoke, but I was also fond of the weird magical grifter Oiko, who provided a lot more fun than his role as wisecracking, diminutive sidekick demanded.

Even if you account for having multiple goes at several levels, it isn’t a long game - it’s perfect for a couple of weekends’ play, or for a week or so of after-work dip-ins. And that’s fine. The care that’s been taken to ensure every level is interesting means that it never feels lightweight, and I’d rather it be the length it is, than extend into lacklustre grind. And besides, with talk of a level creation and editing tool being added to the game soon, there’s potential for it to take on a new life after completion. 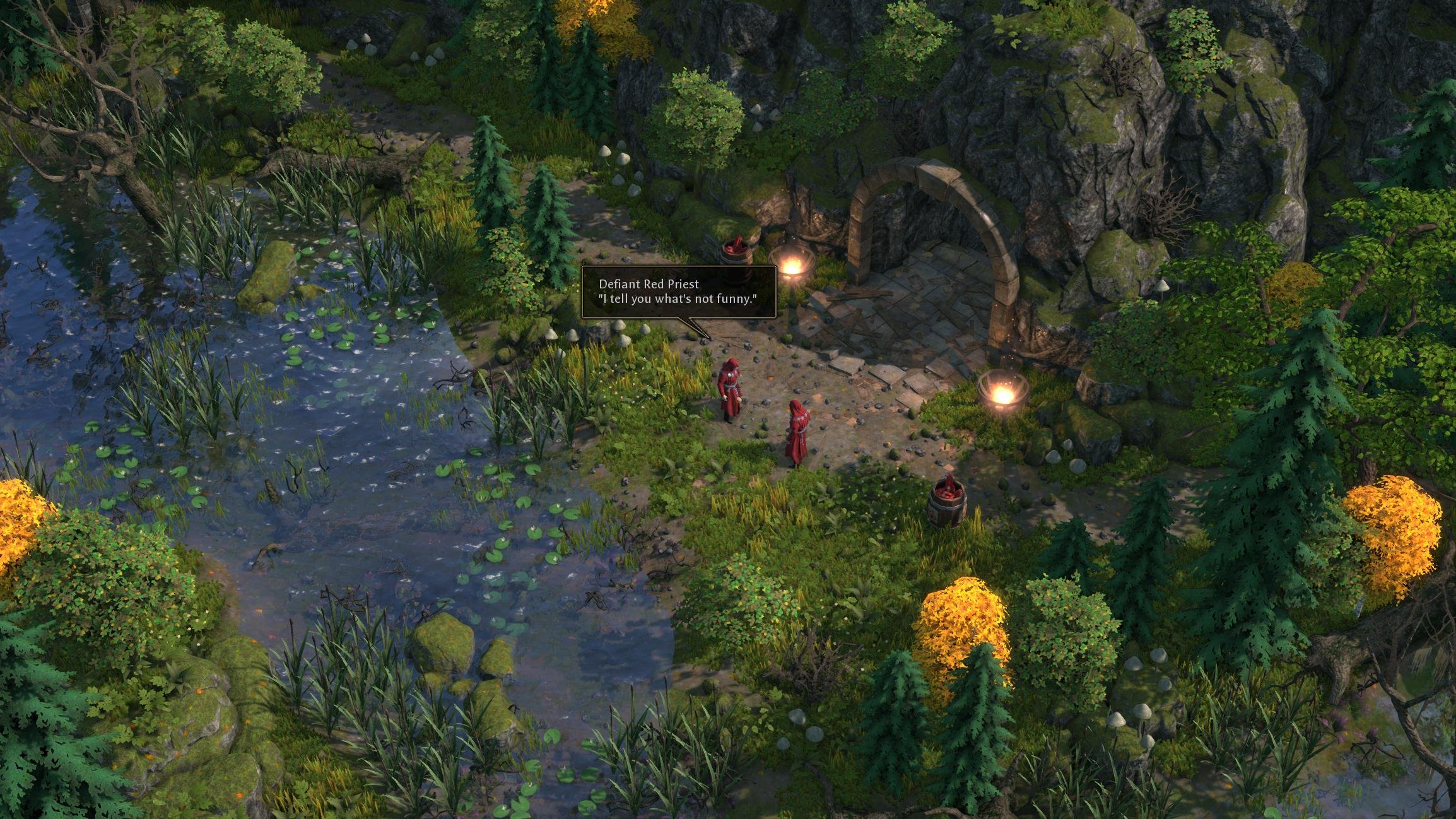 After finishing with Druidstone, I found it interesting to think how much less of a game it might have been if its developers had gone through with early plans to make levels procedurally generated. While a more random, improvisational version of Druidstone might have appealed to my appetite for turn-based tactical games, and might - in fairness - have been more replayable, I suspect I would have enjoyed it less, and gotten bored before the end.

As it is, this is a perfectly reasonable portion of carefully planned fantasy stabbing, which was enough fun (once I started playing properly, at least) to make me reevaluate my whole position on puzzle elements in tactical games. Hell, it might even be time to postpone my next marathon slog with XCOM, and revisit Into the Breach.