Well, there went two hours of my life in a haze of clicking, fountains of gold coin graphics and repeat, fleeting senses of achievement that were immediately eradicated by desire for the next achievement. "I'll just have a quick look at this official, free to play Dungeons & Dragons clicker game", I thought when I saw an announcement that Idle Champions Of The Forgotten Realms (download via Steam here) is offering some free DLC for the next couple of days, "then I can bash out a quick news piece on it and get back to my day."

Somehow I forgot two very important things: 1) even all these years on from Baldur's Gate, I remain a sucker for anything Forgotten Realms b) if I start playing a clicker, aka idle game, I am DOOMED.

The news hook for looking at Idle Champions Of The Forgotten Realms today, despite its having been released two months ago, is that it's running a promo until the weekend, in which y'all can grab the paid Starter Pack DLC for no pennies instead of its usual $2.99. Said Starter Pack contains assorted boosts designed to make initial progress through Idle Heroes a little speedier, which is another way of saying its usual purpose is to coax money out of folk who feel they just can't wait for the next big unlock. You know the score.

As for the game itself, it's both a hideous dishonouring of everything that makes D&D wonderful and sorta-kinda a decent enough thing as clicker games go. Here's the score: your party, initially consisting of a single dwarf bloke, automatically march through fields, towns, forests, inns and whatever else the game found down the back of its Ye Olde Fantasye Settings sofa, stabbing and slashing and zapping and all that good stuff. For every kill, coins; enough coins buy a level up for a character; even more coins unlock an extra party member.

And so it goes, and where the clicker element comes in is that you can yourself perform a limited amount of damage by frantically bothering baddies with your cursor. (The damage of your own clicks can also be upgraded for gold, natch). Then there are further tiers of currency which buy chests containing loot with permanent stat-up effects, and inevitably this is the currency that you can also buy with real Earth money. It's all following a familiar model very closely underneath the ARPGish skin, and it knows all the tricks of the trade used to wring cash out of people who find themselves slaves to the rhythm of constant simulated achievement. 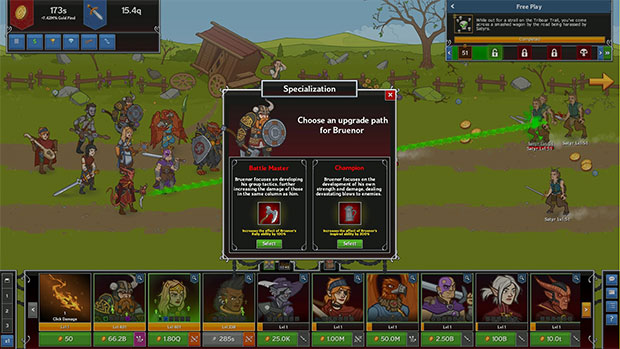 It takes minutes before you party has a) slaughtered tens of thousands of enemies b) gained millions in gold and c) ranked up to level 200, and reconciling this with the average tabletop AD&D experience is obviously impossible. All the imagination and thoughtfulness
of pen and paper roleplaying is burned in favour of mindless genocide and fountains of cash.

But! There is a game in there trying to get out. The gradual unlocking of new party members doesn't simply mean more auto-damage on your part, but also paying some attention to passive bonuses that activate only if they appear in specific formations. There's a sort of RPG party Tetris element here, fiddling with who goes where in order to turn that skill on, but if they're there then that one stops working and... Also, the act of unlocking new characters is rather pleasant, and (even though it isn't really) feels like a more meaningful goal to pursue than simply another button that generates more cash.

There are also manual super-abilities, on timers of course, which you can use somewhat thoughtfully in order to beat boss fights. All told, this stuff means it's an oddly active idle game. It will generate oodles of cash by itself, but all the unlocking is manual, your dudes will generally hit a brick wall on bosses if you're not there to manage the situation and... yeah, it's almost harder to just leave the thing to do its own thing than it is to abandon it entirely. Which is, of course, the sanest thing to do.

Anyway: as well as being a monstrously inappropriate use of the Forgotten Realms license, it's also a devilishly compelling one, and one which occupies a surprisingly interesting space in between action RPG and clicker game.

Clearly though: avoid it entirely if you value your time at all. Even if it is giving away $3 of DLC for free until Sunday. DON'T MAKE MY MISTAKE.