I'll admit it -- I decided to take Dustwind for a spin primarily because of one line on the Steam store page: “Play as a dog.” In post-apocalyptic battle arenas that evoke Fallout and Wasteland, no less. And we’re not talking about your run-of-the-mill, hangs out in dog parks defecating everywhere kind of dog. No, Dustwind’s pooches are battle-hardened terrors, capable of covering the battlefield in mines or manning a vehicle’s turret. How could I say no? How could it go wrong?

After an entirely unexpected, properly robust series of tutorials -- an early access miracle -- I immediately flung myself into the barracks where all Dustwind’s murderous characters are born. You’ve got your boring old humans, your loud and heavily-armoured robots, and then you’ve got everyone’s best bud, the loyal canine. Here’s my slavering pal, Barkley: 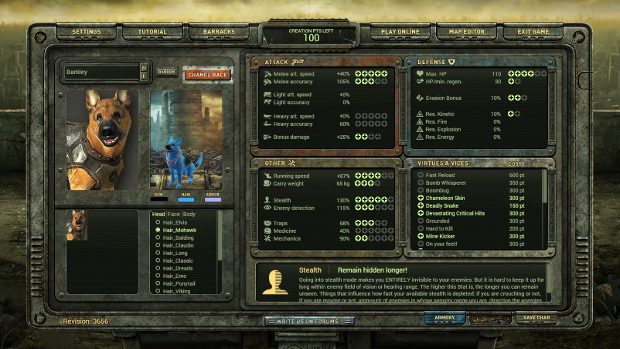 What a handsome blue boy! And he comes complete with objectively the most important of dog accessories: a fetching bandana. He’s perfect. He also took a long time to make. Dustwind comes laden with a great number of RPG skills and traits, from proficiency in light weapons to fixing up vehicles and turrets, so figuring out what’s valuable and what’s just going to burn through skill points takes forever. And that’s before the gear loadout has to be picked. Guns, knives, bows, rocket launchers and grenades -- there’s a bounty of death-dealing instruments to choose from, along with armour and support kits that heal and repair.

In your typical RPG, all of this would be doled out through experience and quest rewards over the course of hours. Dustwind just dumps a huge amount of skill points on you and from there you make a fully developed character. There are so many places where you could go wrong, and a lot of it seems meaningless, as there’s no real context to all the percentages and bonuses if all you’ve played is the tutorial. However, every character you make can be edited at any time, as long as you’re not in a match. Dustwind flings you straight into the deep end, but it at least gives you some inflatable armbands. 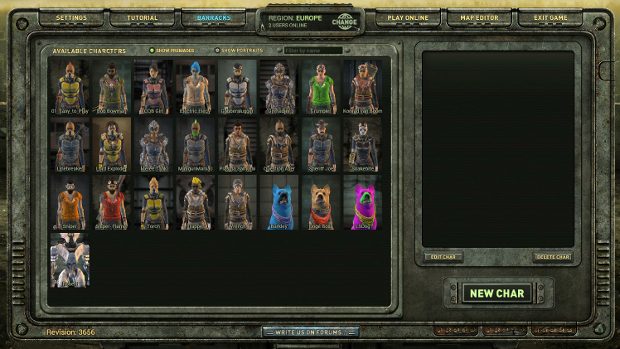 All of this can also be sidestepped by just picking one of the many pre-made characters hanging around in the barracks. They cover all the bases, including dogs, and you’re less likely to end up with a broken character. Now if only I could go back and let Past-Fraser know.

Since dogs are incapable of using guns (unless they’re mounted on a vehicle), I poured everything into stealth and melee, envisioning some sort of murderous shadow who can take out a room of enemies in a heartbeat. He’d earn all of the dog treats. I continued to think about all the wonderful things that Barkley would do for the subsequent hour as I waited to find a game. 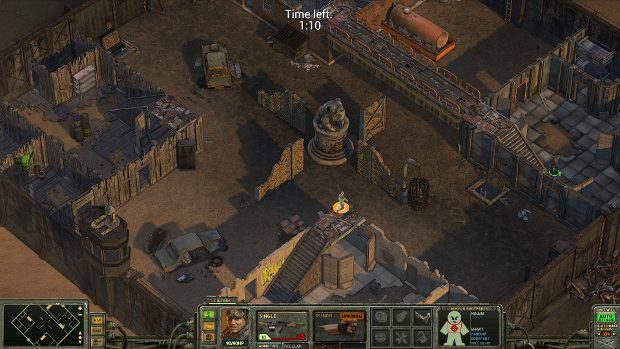 It’s the curse of the multiplayer indie title: without enough concurrent players, there is no game. Dustwind has even more to contend with than some other multiplayer romps because it’s both session-based and it stops new players from joining once the game begins. And that’s why I ended up waiting beyond that hour, after the one game that appeared did so when I was in the toilet playing Animal Crossing on my phone. When I returned, it was already in full swing. With two players.

They don’t call me Fraser “Perseverance” Brown for nothing, or indeed at all, but if they did, it would be appropriate because I absolutely did persevere, eventually finding myself in a game lobby. It was a co-op match, pitting around six or seven of us against AI-controlled bandits. 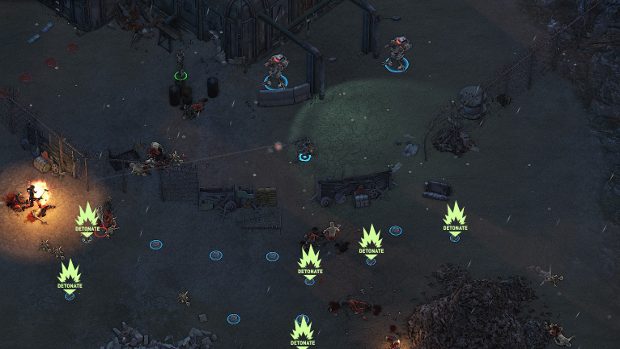 We spawned just outside the bandit hideout, and before anyone could even say “howdy”, we were surrounded by enemies. Enemies who, in a matter of seconds, found themselves flying through the air or exploding in a shower of glorious gibs. Explosions, blood and guts filled the area as bandit after bandit fell. It was thrilling. Or at least it would have been thrilling if I hadn’t been a dog. Unfortunately I was a dog, which meant every enemy turned into a Jackson Pollock painting before I could even get to them. Since we started in full view of the bandits, I couldn’t use stealth, either.

“Playing as a dog is hard,” I apologised.

“Dogs are terrible,” everyone responded. 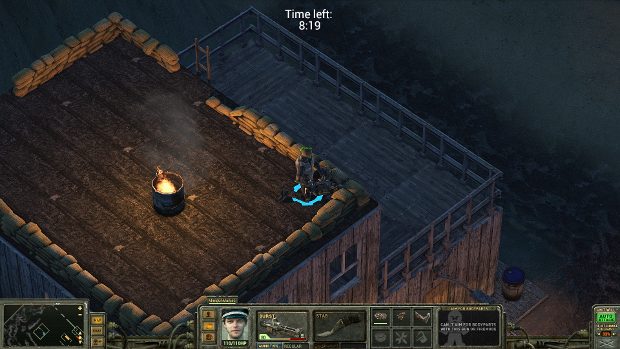 Moments later and this dog wasn’t just terrible, he was dead. I found a group of honest to goodness living bandits, rushed at them, and then I was promptly filled with holes. I could only spectate, though not for long. The host soon followed me down the River Styx, prompting him to quit the game, ending the session for everyone else.

It’s pretty clear that, right now, dogs are utterly useless aside from a few very specific situations. Melee fighters rely on stealth, and if that’s not an option, then they’re in trouble. I couldn’t see a vehicle that I could jump into as a gunner, either, which is the only other situation I had prepared for. Guns rule the roost here. 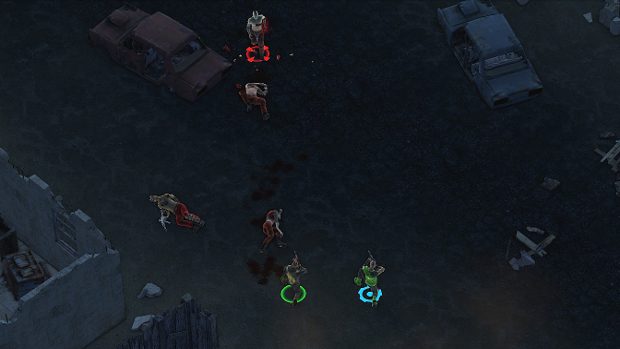 I got rid of Barkley and conjured up a new character: a boring old human. A boring old human with guns! That makes all the difference. Now I’m not going to pretend that my second match didn’t go terribly, as well, but I did shoot a man. And his robot pal. Multiple times! It was progress, at least. While PvE enemies are largely mindless and all of my co-op experiences have been marred by lag, my PvP bouts have been mostly problem free and considerably trickier, forcing me to wake up my sluggish brain and actually be a bit cunning.

It’s surprising how much more time you have to be clever when you’re not worried about shooting people. Characters auto-attack by default, and as long as there’s an enemy in range, they’ll attack unless told otherwise. That frees you up to worry about positioning, stealth, laying traps and prioritising targets instead of making sure your finger is always on trigger. 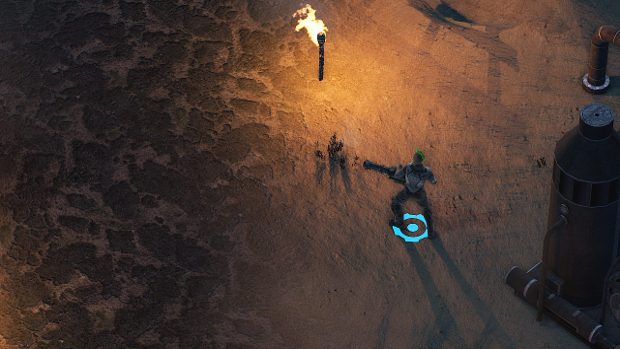 There are lots of other little conveniences. You can see inside buildings and underground by switching to a different view -- though you can’t see enemies hiding inside -- letting you better plan for clearing them out. If an enemy gets all up in your face, slapping you about or butchering you with a rusty axe, you can give them a swift kick, knocking them back. And every move can be cancelled just by hitting ‘S’, which comes in handy when you’re walking past a door and you notice that there’s a Tank Girl cosplayer standing right there. You can immediately stop dead in your tracks and start firing.

Sure, a lot of firefights devolve into two people standing in front of each other while they automatically turn each other into bloody swiss cheese, and I’ve been one of those people, but I’ve also set up ambushes, using stealth and explosives to trap and kill my fellow Mad Max rejects, and I’ve had a couple of drawn out game of cat and mouse where we’re both absolutely sure we’re the cat. 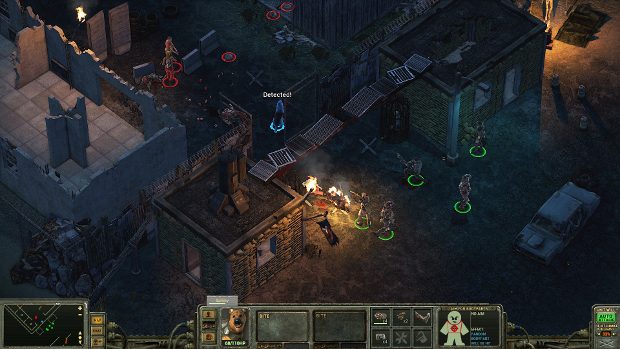 Yet there have been no dramatic car fights or huge deathmatches full of flamethrower-wielding maniacs and blokes with mohawks raining down missiles on everyone below. Almost all of my games have felt subdued, largely because almost all of my games have been half-empty. To play requires preparation. Getting a group together. Setting it up on Discord. The last time I looked for a game, there were 10 people playing. A quick glance shows me that it’s now down to two.