Last Time on the BoC: With the exception of a squad of sharpshooters hurling themselves off a roof to punch an invading army, and a vast two-headed giant muscling its way into the fort (only to get thoroughly Idded), the Basement entered a period of shocking prosperity...

All over the fortress, things are becoming… sluggish. It is as if time itself has become viscous; picks swing towards rock with the ponderous slowness of clouds, while the tavern’s dancers find their limbs drifting across the stone floor with dreamlike torpor.

Mayor Urist looks over to Lorbam - the fort’s founder and spiritual leader - and their eyes flash with shared concern. It’s the beasts. The domestic animals. In the fortified valley below the mayoral tower, they are swarming: cows, yaks, buffalo, horses, donkeys, goats and pigs, seething in their pens like worms in a hot bin.

They have become too many; their cumulative rage is warping the underpinning of spacetime itself, and if they continue to breed, their fury will crystallise time into an endless, frozen instance. While there is still time to act, Urist orders the construction of a row of butcher’s shops, and calls all dwarves to the killing floor - all but a single pair of each species must be sacrificed to the gods, in order that time may flow again.

Dwarf Fortress is, famously, an absolute monster of a CPU-hog. Its pathing algorithms in particular absolutely wail on even the beefiest machines, and the game laughs at the very concept of multiple core processors. At this point in the Basement’s life, DF was running at half the speed it was in episode one, and the quickest remedy to that was to massacre as many entities as possible, so they no longer needed to pathfind. Also: fond memories of when a single weasel nearly rendered the game unplayable in episode 3. Interesting to think the weasel's pit would eventually become the Bird Hole.

As the ground steams with torrents of bovine blood, and the tropical night shakes with the death-lowing of a hundred beasts, time begins to lumber forwards at something more like a reasonable pace, and the dwarves celebrate. They sing harsh working songs as they push wheelbarrows down into the fort, stacked with meat, cartilage, eyeballs and hooves. The grim harvest will keep chef Ushat busy for years to come.

As the fort’s sixth year dawns, it is on a changed settlement. At last, the New Fortress has been dug out, smoothed, furnished and emptied of rubble - within its labyrinth is a high-quality bedroom for every dwarf, and a dining room for every family. The claustrophobic warren of the Old Fort has been emptied, and the food and drink industries have been consolidated in a brand new complex on its own level of the mines.

There is even a new library, where all the Basement’s books have been stashed, and where scholars from all over the world are congregating to discuss topics as varied as water clocks, kidney stones and the phases of the moon. Lorbam couldn’t give a shit - she just loves her zoo - but it makes Mayor Urist feel important, at least.

Still, while things may be looking fancier, the fort is still a troubled place. Following the lead of the furnace worker Udil (who is still imprisoned for her bard slayings), several more dwarves are alternating between tantrums and fits of deep depression.

The woodcrafter Ushrir, who built the legendary instrument Wiltworries to calm tensions in the Fort’s early days, has now lost the plot, and keeps doing this thing where he grabs on to people’s thumbs and then starts breaking individual bones in their bodies. The farmer Melbil, and the medic ‘Doc’ Sakzul are similarly afflicted, and are taking it in shifts with Ushrir to spend months in the deep pit of the jail.

Between them, the dwarves decide that all of this unrest is clearly spreading from the psychic wound that is the Bird Hole - something must be done about that noisome pit. Of course, the simplest situation would be to release the Birds from the Hole, but that would not be properly Dwarven.

And so, with heavy hearts, the dwarves brick over the Bird Hole with flagstones of solid gold, muffling the harrowing squawks from beneath. The birds continue their perpetual fight against one another, pecking away in the reeking dark beneath a floor of gold, like a blunt metaphor for the London rental market.

But let us not think too much upon the Birds. For the elves have arrived, and Lorbam is rushing to the trade depot to see what exotic creatures they have brought. (These days she is surrounded by a pack of the dingos she has trained, loping along in a yipping pack like yes-men with clipboards in the wake of a cabinet minister).

Dwarves and elves usually have fairly frosty relations, but this particular lot have a rapport with Lorbam, seeing in her a fellow beastmaster with little concern for the traditions and trappings of her culture. She has sold them very many cool stone action figures of historical witches, and they have decided it’s time to show their gratitude.

Two tigers, a jaguar, a mole, a toad and a female kangaroo are revealed. And then, with a flourish, the lead elf reveals their prize offering for the year: a chimpanzee. As the fort cheers and sings raucous songs of victory, the baffled primate is carried downstairs into the fort, where it is installed as the centerpiece of Lorbam’s magnificent new suite of quarters adjoining the zoo. A joyous day indeed.

Those of you who have been reading since the beginning will realise this is genuinely a very special moment. Back in Episode one, we learned that Lorbam’s whole expedition to the Jungle of Hides - and the entire ramshackle civilisation that has grown up around it - was founded on the dream of starting an Underground Chimp Zoo. In that sense, Lorbam’s quest is now complete: while she’s got plenty of plans yet, if she dies now, she’ll go happy, and her legacy will be assured.

Summer was a relatively quiet month for the basement, except for the small business of a haunting. In the aftermath of the Great Time Sacrifice during the winter, in which I mullered 90% of the fort’s livestock to preserve framerate, I decided to try overhauling the fort’s organic detritus stockpiles and storage systems. However, since DF’s stockpile controls can be pretty fiddly even to a veteran, I ended up accidentally dumping a load of dwarven corpses from the deep crypts onto a surface refuse tip, where they sweltered in drifts of decaying hooves under the equatorial sun. This resulted in the following, utterly magical alert:

As it was, the ghost was really chill. He just sat for a while in the old abandoned carpenters’ barracks, keeping a group of dwarven children company as they played make believe, until I got his body buried again. I like to believe he was a sort of spectral Macho Man Randy Savage, who befriended a bunch of brave kids exploring an abandoned cellar, and then spent the rest of the summer showing them cool ghostly wrestling moves, and helping them resolve their personal differences while they helped him resolve his unfinished business in the mortal world. There was probably a tearjerking final scene where one of the kids tapped three times on the floor like a wrestling ref, allowing him to disapparate in peace. Shit, this would be an amazing 1980s kids’ adventure movie, wouldn’t it? Title suggestions in the comments, please.

A year after their last appearance, like clockwork, a goblin siege arrives to terrorise the fort. But this time the gates are sealed as soon as the herald Fladasreelgus arrives, and they don’t catch anyone outdoors. This time there will be no nonsense with sniper towers - the dwarves are going to wait things out in tried and tested fashion.

This would be all well and good, only the fort’s mining corps choose this exact moment to start knocking out the roof of the old fortress, in order to open it up to the sky and create a beautiful new meadow inside the valley walls. Inevitably they completely fuck it, digging all the way round a big chunk of ceiling, like in a cartoon where an idiot stands on a precipice and saws through the rock connecting it to solid ground.

The suddenly unsupported plug of earth punches through the four floors below it, and smashes right into Lorbam as she wanders the zoo with her pack of dingos. Two of the beasts are instantly blasted into glop, and the whole of the zoo’s entrance hall is coated with Lorbam’s gore.

Amazingly, however, Lorbam survives, and is rushed to hospital with a lower body like a kicked-open carrier bag full of cheap meat. The doctors manage to stabilise her, but there’s a problem - with the gates sealed, there’s no access to the ponds outside, and therefore no source of water to clean Lorbam’s wounds, or keep her from dehydrating (injured dwarves and prisoners won’t drink booze, and will die without access to fresh water).

Speaking of the ponds outside, I was really amused by a trio of scholars who decided to loiter outside when the gates closed, and went to sit in a nearby pond as if enjoying a hot tub. Because the scholars weren’t fort residents, the goblins weren’t hostile to them, so they went on bathing uninterrupted when the siege began. Indeed, eventually, some of the goblins climbed in silently into the pond to join them, resulting in this incredible scene.

The dwarves are anxious not to lose Lorbam to the water shortage, but Mayor Urist absolutely forbids any talk of sending a sortie out to drive the goblins away - there are dozens of the buggers out there. No; Lorbam’s only hope is to hold out against thirst longer than the goblins can hold out against boredom.

Days later, on the night of the full moon, Urist’s decision is somewhat vindicated: all of a sudden, one of the goblins turns into a fucking werepanda, and bloodily mauls fully one third of the besieging force in a thirty-six page fight before it is slain. But to the horror of the Dwarves inside, the goblins don’t turn back. 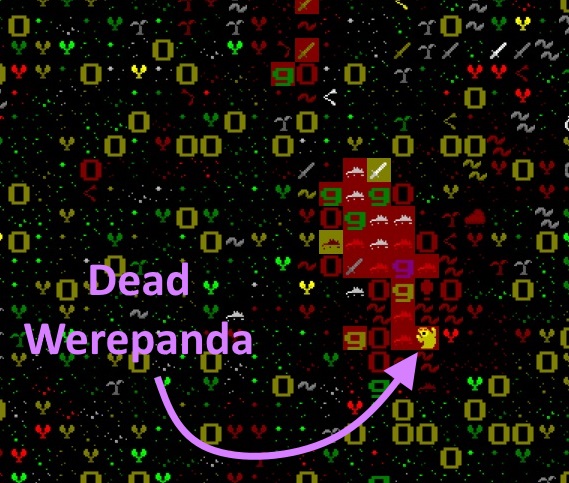 With winter on the horizon, and the goblins not budging, things are looking desperate. News comes from Oddom in the deep jail: the prisoner Udil has died of thirst. Although Lorbam is tougher, she is now unconscious and deeply dehydrated, and will only be able to hang on for another few days at best.

Action must be taken - and there’s only one option left.

Deep in the caverns beneath the lowest mines, there is a vast underground lake. Unsealing the way down there will be risky - the lake’s pitch-black shores swarm with troglodytes, trolls and worse - but with the right precautions, it should be possible to set up an outpost to gather water from. It’s the least the dwarves can do for their founder.

And so the miners ready their picks to break through into the caverns. And just as they do, this happens:

Next time on the BoC: Honestly, at this point, who knows?