If you click on a link and make a purchase we may receive a small commission. Read our editorial policy.
Developer: Sandlot
Publisher: D3 Publisher

2356. That’s how many van-sized ants Earth Defense Force 5 tells me I’ve shot, electrocuted, carpet-bombed, mortared and hammered into chitinous shards and umber mulch. All this since a bad day at work saw my security guard character roped into an increasingly absurd arms-race against gigantic invading alien frogs and their legion of insectoid thralls.

2356, and at this point, I’ve barely scratched the surface. EDF 5 can feel like a trade off between scale and polish at first, and although this throwback third-person shooter has some incredibly frustrating quirks, it’s still proof positive that a solid concept doesn’t need much polish to shine. Like a magnifying glass pointed at a hill full of giant bastard ants.

Earth Defense Force 5 is Attack on Titan as directed by Ed Wood, a B movie with a big enough budget to realise its maniacal director’s every ridiculous whim. As a member of the titular army, you’ll repel an alien invasion across 110 levels, collecting weapons, gadgets, vehicles and health-increasing armour tokens until you’re kitted out enough to try the harder difficulty levels, or grind at the earlier stages for more murder toys. 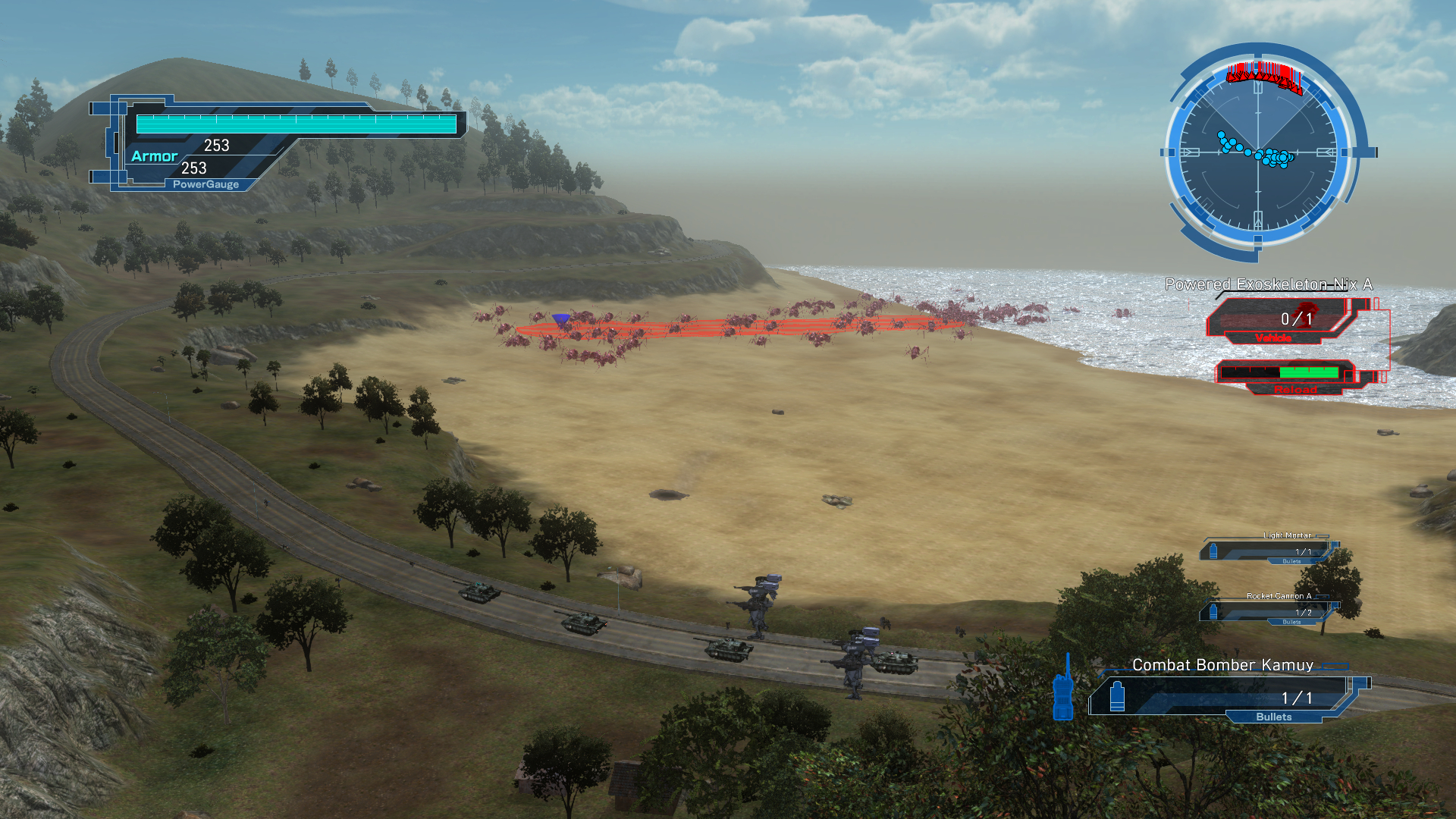 Just like a homebrewed recreation of the stop motion and miniature effects from mid-century creature features, EDF 5 evokes the feeling of smashing mismatched toys together. Of pouring out your entire childhood collection of soldiers and monsters and concocting some flimsy headcanon so they’ve got a reason to go to war.

You’ve got your heroes, your favourite action figures with bags of detachable parts in the form of the game’s many loadouts. Your old reliable, assault rifle wielding Ranger. Your jetpack-rocketing Sky Diver. Your shoulder-mounted missile launcher toting, power armoured Lancer. Your airstrike beckoning, mech-summoning Air Raider.

But you need something to fight! What if you used these educational ant figures your uncle bought you from the natural history museum gift shop? But they’re way too big, unless...what if they’re giant ants! What if you build a railgun from lego and tie it the arm of this frog plushie you’ve got lying around? What if one of your guys could use motorbikes, or tanks, or mecha? What if Godzilla decided to get stuck in for some reason? 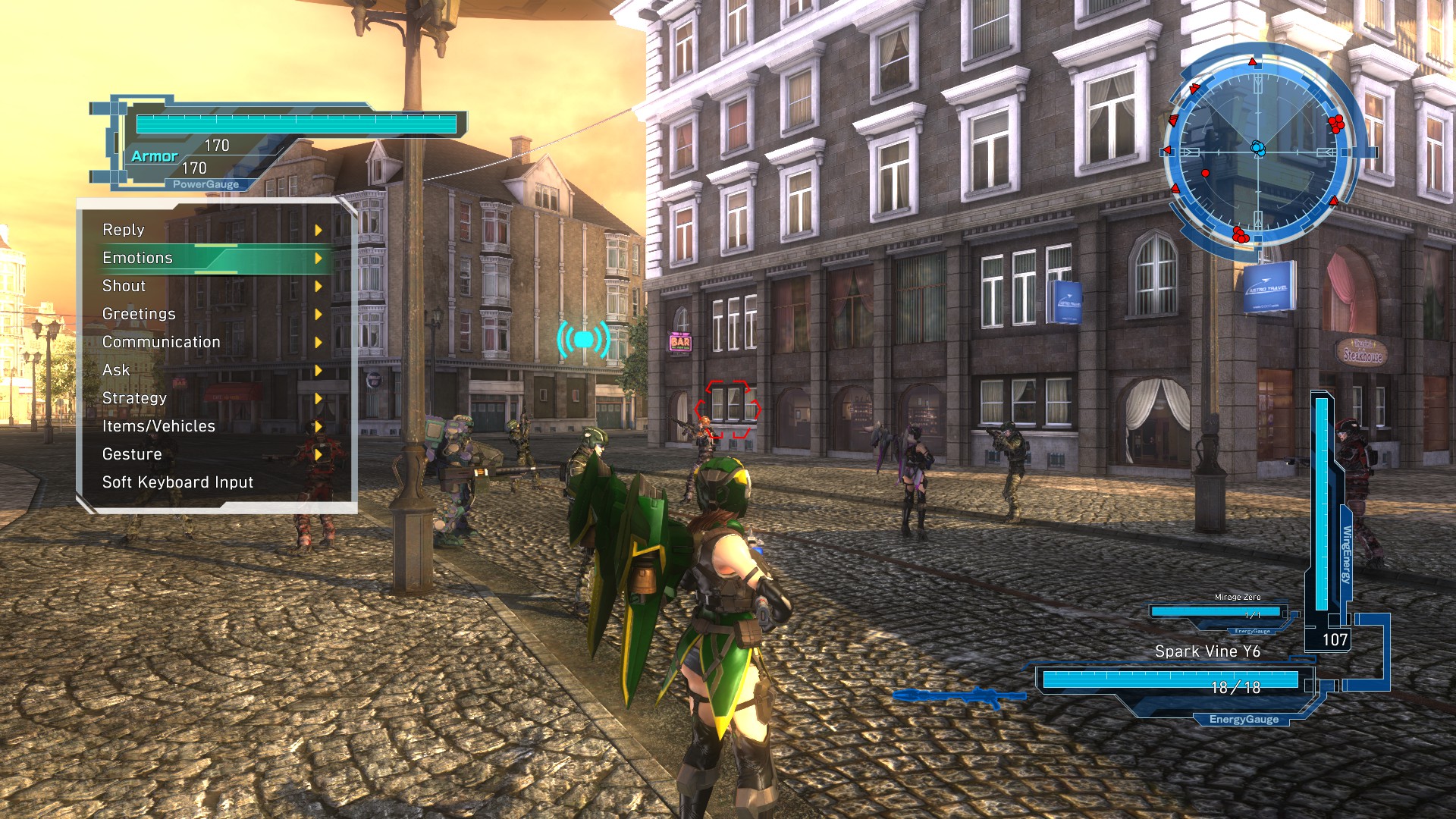 These conspicuously disparate visual elements feel consistent due to the brilliant sense of humour the game has about itself. Not only in the slapstick spectacle of watching frog and spider bits fly about and office blocks crumble to dust, but in dialogue that I can guess has been refined over the series from charming crap to a genuinely hilarious self-parody. I went in expecting a podcast game. I was surprised how often I found myself muting whatever I was listening to so I could hear my squadmates make observations such as “That pylon came from the sky. Which means the monsters also came from the sky.” Although this instalment regrettably lacks the rousing EDF Battle Hymn, it’s still always a treat when your squad spontaneously burst into off-key singing during some hellish reconnaissance through subterranean tunnels.

The gripping, jarring unreality of the setting is accentuated by the realisation that no-one in this universe seems to have ever seen a regular sized ant. Your shocked and terrified squadmates refer to the big bugs as ‘monsters’ throughout, never making a connection to any diddy little equivalents. EDF5's story is actually a canonical reset of sorts, with the titular force encountering the aliens for the first time at the beginning, and they constantly try to rationalise the invasion through the lens of their terrestrial experience. "What country did this?" they cry, as mandibles the size of hedge trimmers close around their abdomens. "It must be terrorists!" they deduce, as flying saucers eviscerate city blocks. "They look just like humans!" they scream, blowing the limbs off bipedal frogs in torrents of purple goop.

Before each of the game’s 110 missions, you’ll choose one of the four classes, and settle on a loadout. Objectives are generally ‘kill all the things’, but there’s also some light strategy elements in working out which loadouts suit which environments. This can occasionally be an issue when you get two thirds through a mission and realise you didn’t bring something with a long enough range to say, knock a transport ship out of the sky. Generally, though, you’re free to experiment with any of the hundreds of collectibles you find throughout. 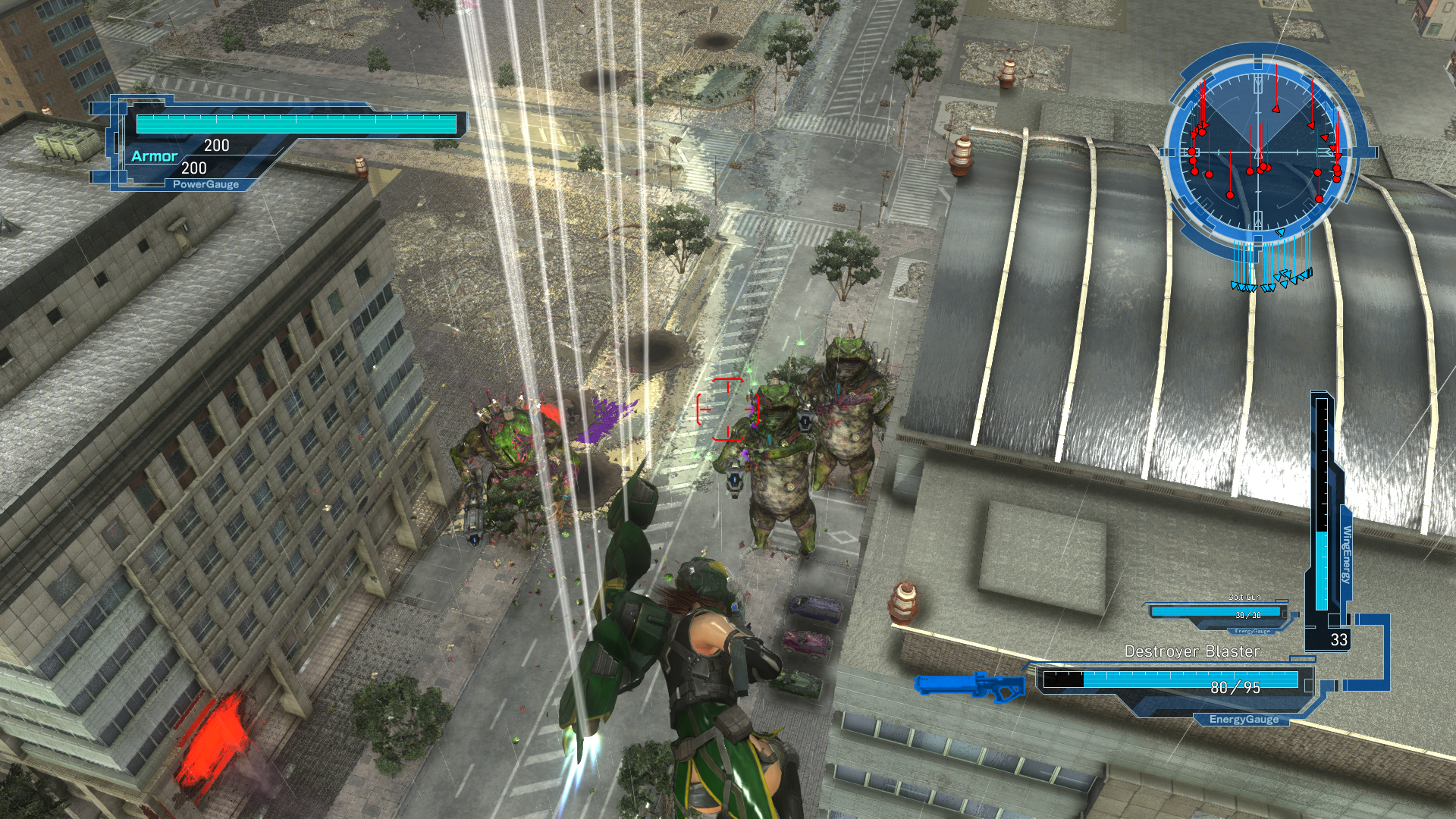 A lot of the game’s challenge comes from working out when you can go ham without overextending yourself. The beefy Lancer class, for example, packs some screen clearing weaponry but is too ponderous to reliably retreat from a bad situation. This balancing act is most keenly felt with the Wing Diver, whose guns use the same gradually recharging power source as their jetpacks. A wing diver without power is slow and defenceless, encouraging you to make swift, devastating hit-and-run attacks. The default Ranger is the choice for when you want to switch off your brain. Aside from a dodge roll (which proves to be a rare example of a fluid, satisfying locomotion in a game that generally errs towards slow and awkward) there’s very little for this class to worry about except which of the dozens of insects you want to point your crosshairs at first.

There are some things this game does that are just bollocks, though. You ‘level up’ your squad by collecting health-increasing armour tokens in the form of giant crates left behind by slain enemies. This is basically the equivalent of having to manually collect your experience points, and the default walking speed for the four classes starts slow, and gets unbearable in the Lancer’s case. It is roughly as enjoyable as eating a plate of Lego samosas.

Complaint two, which is sort of a sequel to complaint one, is that it can often feel like the game is using your own patience as a mechanic, rewarding you for putting up with tedious stretches with wacky fun, rather than for playing or planning well. It does seem that, although a big part of learning to use the Lancer or Wing Diver classes is planning your downtime and reloads, there are inevitable stretches of waiting, gaps where the game says “I’m glad you had fun with the Gatling gun, now wait for ten actual seconds for it to reload.” As a method to prevent one class from feeling superior to the others, it does its job, but at the cost of flow to match the levity and chaos on display elsewhere. 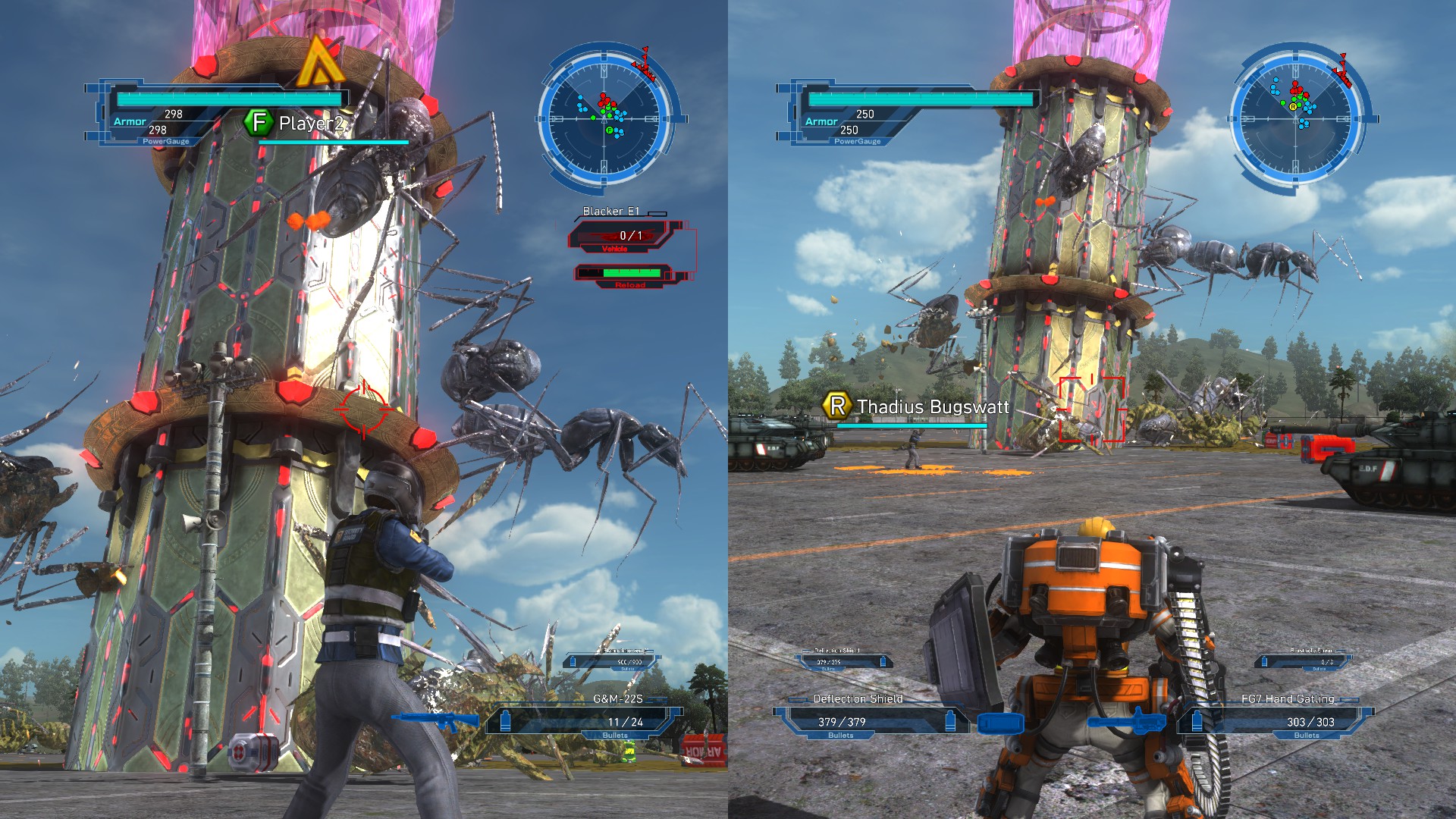 I’m ultimately willing to forgive this, largely because it has lots of big guns and lots of big ants, but I’m not versed enough in the series to say that this is absolutely the one you want to go with, especially as the recent (although sadly console exclusive) Iron Rain seems to have fixed a few of the bigger issues I had with EDF 5. I'm also not crazy about the value for money at time of writing. It's over forty quid for the base game, and getting all the luxury extra bits is almost as much again. This includes an exoskeleton for the Lancer that improves its painfully slow walking speed, which is some poison-and-cure nonsense I can’t endorse.

I am going to give it a "Holy gherkins: It’s got couch co-op!” award, because couch co-op is a beautiful feature that deserves nothing but praise, in a thoroughly confident and largely successful game that seems solely designed for you and some mates to laugh with it, at it, and at yourselves until the frogs come home. It’s camp, sure, but as Susan Sontag put it, “Oh no! The bugs, they’re everywhere! The frogs! They’re too big!”