The Elder Scrolls 6 is still a long way off but after being officially announced at E3 2018, small details have started to trickle out. Given how fervent the Elder Scrolls community is, even small pieces of info are a welcome surprise, which is why we've collected everything we know about Elder Scrolls 6. From trailers, rumours and some speculation on a possible setting, there's plenty to dig into here.

Obviously, The Elder Scrolls 6 is still extremely early in development so most of the details currently out are subject to change as the game progresses. The ball is kind of in the court of fans at this point, as Reddit threads teem with speculation based on the little pre-release material that has been shown so far. We aim to gather all of the news and main leaks surrounding the upcoming RPG and we'll be sure to keep this page updated as we get closer to launch, just be aware that a lot of what we know currently is likely to change.

Elder Scrolls 6 release date - when is it coming out?

Let's cut to the chase here, we do not currently know the release date for The Elder Scrolls 6. Not only that, but we are likely a few years out at least, before you'll be able to get your hands on the game. The Elder Scrolls 6 was announced in a brief teaser trailer during E3 2018 and no release date was mentioned. Since then, the only thing we've heard is that it will follow Starfield, Bethesda's space-faring RPG.

Starfield isn't due to be released until 2023, though that's always subject to change. This means that we likely won't see The Elder Scrolls 6 for quite some time yet.

Watch the trailer for Elder Scrolls 6

As of 2022, there has only been one clip released for The Elder Scrolls 6 so far, a small teaser trailer shown during E3 2018. You can watch the video below.

As you can see, this teaser is about as bare-bones as it gets. There's a sweeping camera shot over what is, presumably, the setting for Elder Scrolls 6. There's a logo, which certainly fits with the other games in the series, but in terms of clues as to what the game will entail—nada.

When you compare the teaser trailer for TES 6 to other pre-release games it certainly looked as though TES 6 was pretty early in development. Even the trailer for Starfield featured some insight into the technology that players would experience, so this backs up that we won't be playing the Skyrim successor anytime soon.

Here's what you need to know:We don't have much to go on yet, but here's what we know about the release of it:

Has any gameplay been released?

In terms of Elder Scrolls 6 gameplay, we currently have absolutely nothing to go on. Previously, subsequent entries into the series have switched up gameplay quite a bit, so it's difficult to predict how this one will play at launch. Until gameplay is released, we'll have to keep guessing. We'd certainly like to see base building of some sort added in. Fallout 4 introduced base building to the Fallout series, which was refined in Fallout 76. This mechanic would be great, allowing you to build your own keeps and strongholds across Tamriel. Refined combat would also be a welcomed change. Swinging an axe in Skyrim never felt quite right, neither did shooting a bow or casting spells, it'd be good to see some improvement here. For now, we'll just have to dream. 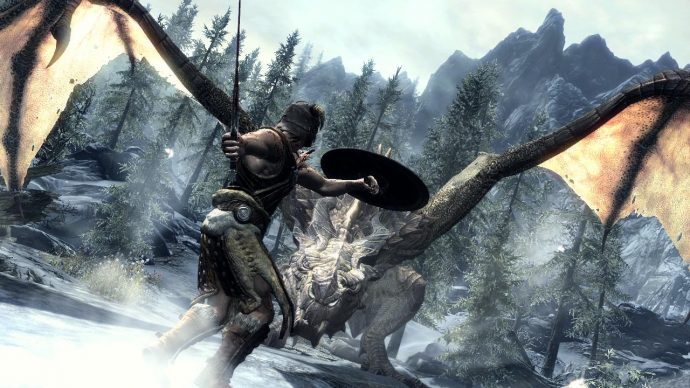 As with any pre-released game, small tidbits of information continue to trickle out for Elder Scrolls VI as we get closer to a possible launch date. With the Xbox acquisition of Bethesda Studios, there's plenty more to talk about regarding a new Elder Scrolls game. In the sections below you'll find updated news snippets as well as rumours and fan speculation. As more comes to light we'll add more, so be sure to keep this page bookmarked.

Is it exclusive to Xbox?

In case you hadn't heard, Microsoft purchased Bethesda back in September 2020. This means that Xbox now owns the studios that work on the Elder Scrolls series, and therefore Elder Scrolls 6. This begs the question as to whether TES VI will come to PlayStation and PC. Let's take them one at a time.

First off, there is absolutely no guarantee that future The Elder Scrolls games will come to any other consoles that aren't in the Xbox ecosystem. Microsoft will make the final call, but they certainly don't need to publish games on rival platforms if they don't want to. We'll have to wait and see.

In terms of PC, things may be much simpler. Generally, Xbox publishes all of its first-party offerings on PC as well as Xbox consoles. This is very unlikely to change in the future, given the company's push towards 'Play Anywhere'. We're betting it'll come to PC. 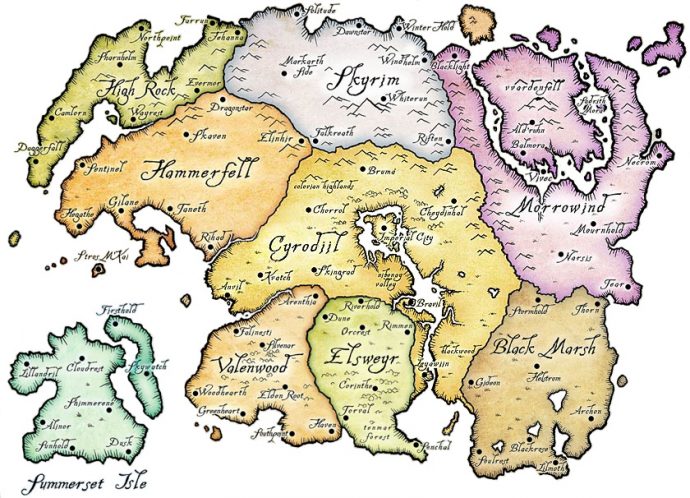 While we don't yet know the setting of The Elder Scrolls 6, we do have the small teaser trailer to guide us. It's clear that the region shown is mountainous, with an ocean stretching out to the right. There is a large crater and the landscape is fairly barren. This leaves quite a few areas to choose from, but it's likely we can exclude Morrowind, Skyrim, Cyrodiil and the Summerset Isles. Our money is on Greenheart/Woodhearth in Valenwood, though areas in the Black Marsh and Elsweyr could also work. Until more information is released, we'll have to leave things there, hopefully we get an update soon. We do know for a fact that the dev team has settled on a location, as revealed in an interview with Eurogamer.

Skyrim Grandma is an NPC in it

That's right, the rumours are true—Skyrim Grandma is going to be an NPC in Elder Scrolls 6. YouTube and grandmother Shirley Curry will be included in the game after fans rallied to have her added as an NPC. There was a petition and after hitting over 50,000 signatures, the developers have obliged. We don't yet know where to find Skyrim Grandma, but we'll keep you posted.

As spotted by a Reddit user, Bethesda was hiring new roles that could have been involved in Elder Scrolls 6 development. The job listing said that the company are 'pushing the bleeding-edge of RPG development' and are looking to "Collaborate on the implementation of new gameplay features: player and characters' behaviours". This hinted towards a production in its early stages, which should in theory rule out Starfield. This could mean that TES VI was in pre-production at the time the jobs were listed, and in June 2022 Todd Howard stated that TES VI is still in the pre-production stages. This gives some idea of how long we'll have to wait for the game to be released.

A brand new engine will be used

According to a blog post by Bethesda Games Studios' Todd Howard, Elder Scrolls 6 will utilise a completely overhauled engine. The partnership with Microsoft seems to be the driving force behind this technological leap, with Howard saying that "it’s led to our largest engine overhaul since Oblivion, with all new technologies powering our first new IP in 25 years, Starfield, as well as The Elder Scrolls 6."

What this means for the new TES game we're not yet sure. New engines don't necessarily mean more ambitious or better [products, it all depends on the tech behind it. Until we see some gameplay or perhaps concept art explaining scope, we'll have to imagine what a next-gen Skyrim successor could look like.

Bethesda are currently working on it

Despite the fact that you'll have to wait for the release of Starfield until TES VI releases, don't worry about whether Bethesda is putting work into it right now. At Bethesda's PAX East 2019 panel Todd Howard explained that the team was working on both upcoming games simultaneously. He gave an indication as to their states of development, saying: "Starfield is playable, Elder Scrolls 6 not in the same way yet." As of June 2022, the game is still in pre-production.

Bethesda is a large company with many different development branches, meaning that they can work on multiple projects at once. They're juggling Fallout 76, TES Online, Starfield and Elder Scrolls, with each game in a very different state of progress. It's not a case of completing a project and moving onto the next, simultaneous development should help speed things up a bit.

It will be included with Xbox Game Pass at launch

Just after their acquisition of Bethesda, Microsoft posted a press release confirming that future Bethesda games would be coming to Xbox Game Pass. The release outlines the following:

"Microsoft’s intent is to bring Bethesda’s future games into Xbox Game Pass the same day they launch on Xbox or PC, like Starfield, the highly anticipated, new space epic currently in development by Bethesda Game Studios."

This means that when it releases, the game will launch the same day on Game Pass. This is great news for Game Pass users, as you'll be able to pick the game up at no extra cost. 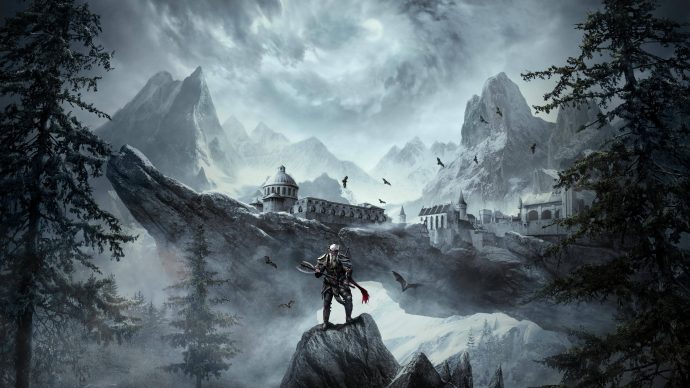 As of June 2022, Todd Howard confirmed that TES VI is still in pre-production. With Starfield being pushed back to an early 2023 release and TES VI stated to be released after it, it's quite clear we might have to wait a while to see the next Elder Scrolls instalment.

Will it be on next-gen consoles?

The Elder Scrolls VI was revealed back in 2018, before we knew much about the Xbox Series X/S or PS5. Now that the next-gen consoles are here, will we see Elder Scrolls 6 on next-gen? The answer is yes, at least on the Xbox side of things. Xbox is well and truly shifting into gear for next-gen, with all of their first-party games working on all Xbox consoles. We'll have to wait and see whether the game comes to Sony consoles, given the recent partnership between Bethesda and Microsoft. TES 6 will come to next-gen in some form, at least.

That's everything we know so far about The Elder Scrolls 6. While it is likely a ways off, hopefully we will hear more information soon. We'll be updating this page if we hear anything, so be sure to check back in.