Have you played the visual novel Eliza yet? If not, stop what you’re doing and play it pronto. This almost sci-fi visual novel was recently awarded an RPS Bestest Best by Sin, who said, in her review, "if I start talking about how much this game has spoken to me, I don’t know if I’ll be able to stop." It's a fascinating, thought provoking game where you play as Evenlyn, a "proxy" for the titular counselling service software. It measures heart rate and key words and things like that, and then generates a counselling script for Evelyn to read. You can get it from Steam(and it just came out on Switch, but that's of no concern to us here).

Matthew Seiji Burns was the writer and director on Eliza. Burns is a Seattle-based writer and musician, and in addition to creating Eliza, he also contributes narrative and music to developer Zachtronics' other games. He's worked in game development for many years in different roles. You may have played, for example, The Writer Will Do Something. But I had the pleasure of asking him about Eliza.

RPS: What inspired you to write Eliza?

There was a very specific moment in 2014 when I was working for a research lab at the University of Washington here in Seattle that was doing research on games. They were also seeing what other research labs were doing with games and interactive technology. I saw a demo of this virtual therapist academic program that was being run out of the University of Southern California at the time.

It was about giving people with PTSD a virtual therapist. It used voice recognition, and it had stuff on your face to see your facial reactions and things like that. And I remember sitting there looking at this demo and just being like, "Wow, that's like so... that's crazy." You get sent to like Afghanistan or something and you get PTSD, and then you talk to AI about it. That really stuck with me. And so, for the next five or so years off and on, I was mulling that over and trying to make a game about it.

I started working with Zach [Barth] in Zachtronics and then told him about this idea that I'd been working on and he was like, “We could make it as a Zachtronics game... Let's do something new for us as a team.” 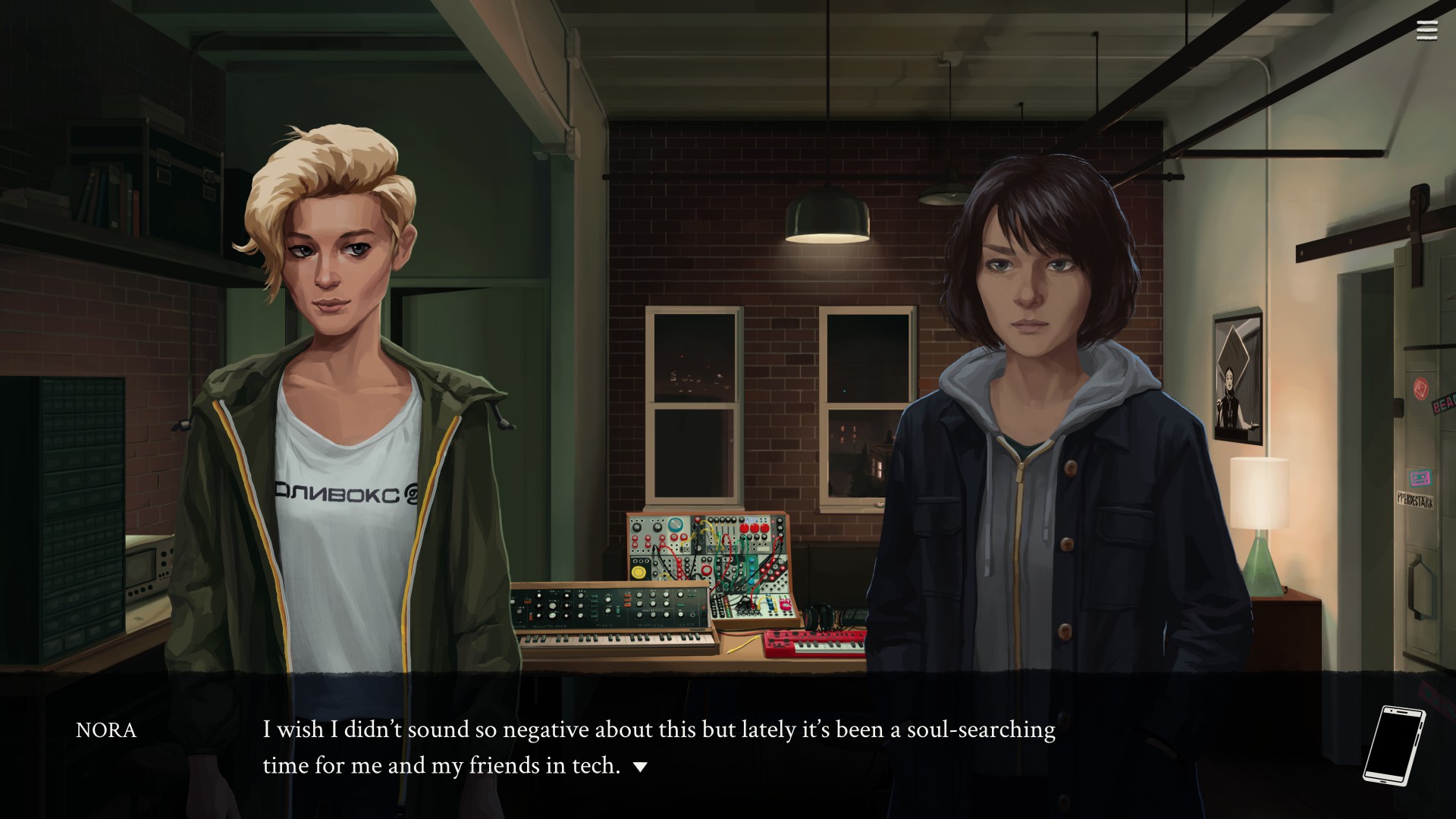 RPS: Eliza references some high-level concepts: behavioural therapy, natural language processing and semantic analysis, data science... How much research did you do on these various subjects to form a believable science fiction VN?

Originally I thought of this idea of more like a science fiction kind of story. But the more I wrote it down and thought about it, I really thought this is the world that we live in right now. Like, I have a couple of mental health apps on my phone right now. Some of them have little chat interface things and stuff like that.

So I don't think it's much of a leap at all to think a big company, like Amazon, would just be like, “Now we're in the mental health business.” They're already doing health, right? Like Apple Health already has all these metrics. It's not too big of a leap. So, I decided let's make it realistic to what the level of technology is basically today.

I researched a few of these things and what the state of mental health is and the intersection with computer science. I also interviewed someone who works for Google right now. She's a local programmer who happens to be the granddaughter of Joseph Weizenbaum, who is the guy who created the original Eliza program. She gave me some ideas about how well an AI would actually understand someone, which is to say, not that well.

I think all of this stuff in the game is pretty grounded, and it doesn't really take any leaps with that kind of stuff. I definitely tried to research all of the technology part to make it feel as realistic as possible. Sometimes it works, and sometimes it doesn't. When you talk to an Alexa or whatever, sometimes it's surprising how well it works and other times you cannot believe how poorly this is going. 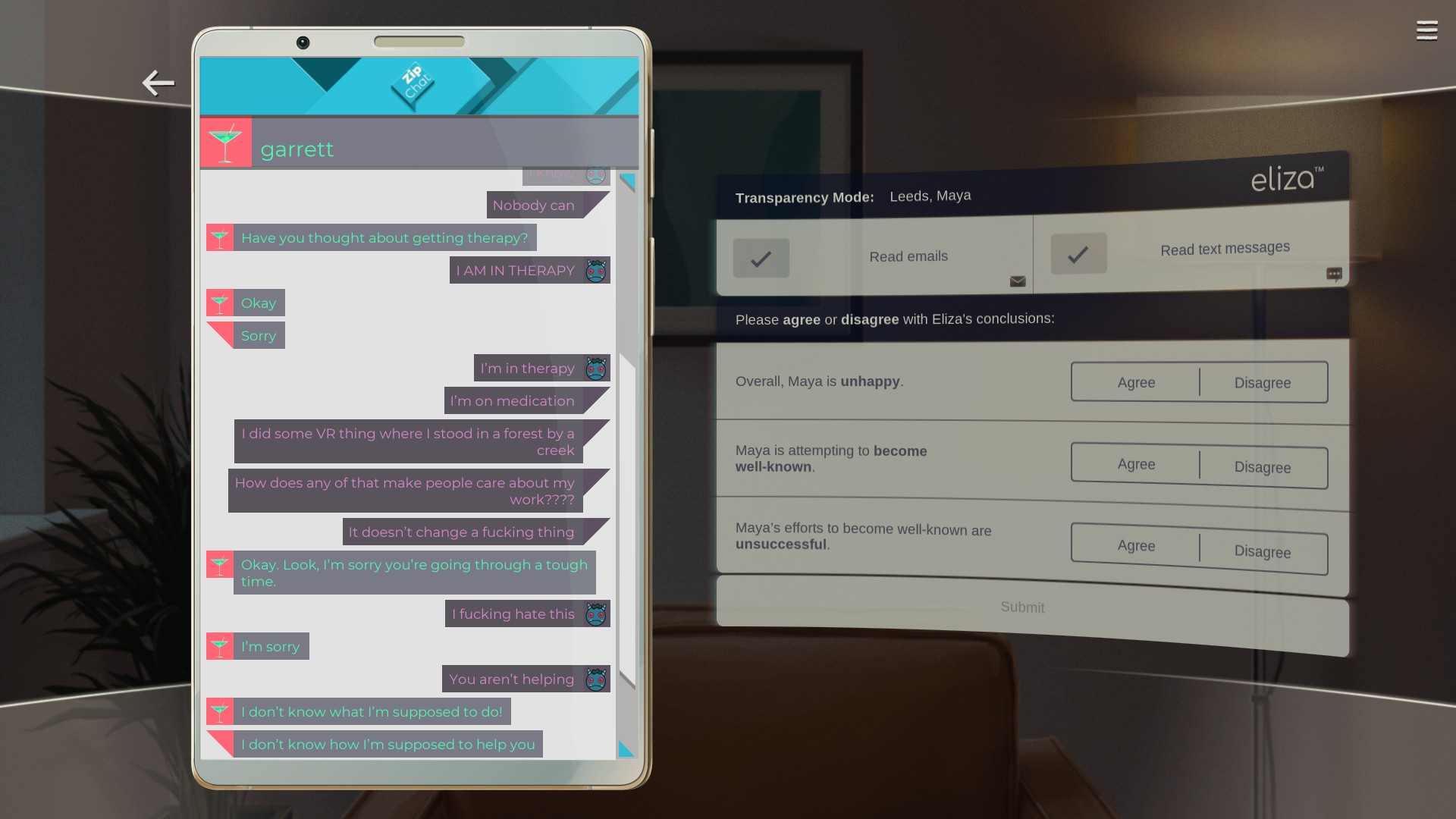 RPS: Process-oriented therapies, like cognitive behavioral therapy (CBT), lend themselves well to being translated into app algorithms. This process-oriented/algorithmic approach doesn’t work for all the clients in Eliza. Why is that?

I spoke to someone who is a licensed therapist (who is not my own therapist) about their process and how they applied CBT. I also found some CBT manuals for practitioners. [CBT] is a very strongly designed process with a lot of, “Okay, now you should say this, and now you should ask them about this” and so on. It was important to me to show this idea of this very buttoned-down technical process butting up against the messiness of humanity that is more messy than any kind of specific framework that you can push things into.

I know that for some people, having a very strong framework, like a CBT framework, is important…yet I think for other people, it just doesn't work as well for them. You need to take a different approach. And having the flexibility to modify your approach is something that Eliza explicitly can't do. I think it was important to show it working in some cases and failing in others because it can't be a one-size-fits-all solution for everyone. At the same time, maybe it did help some people, right? Portraying that complexity was important to me. 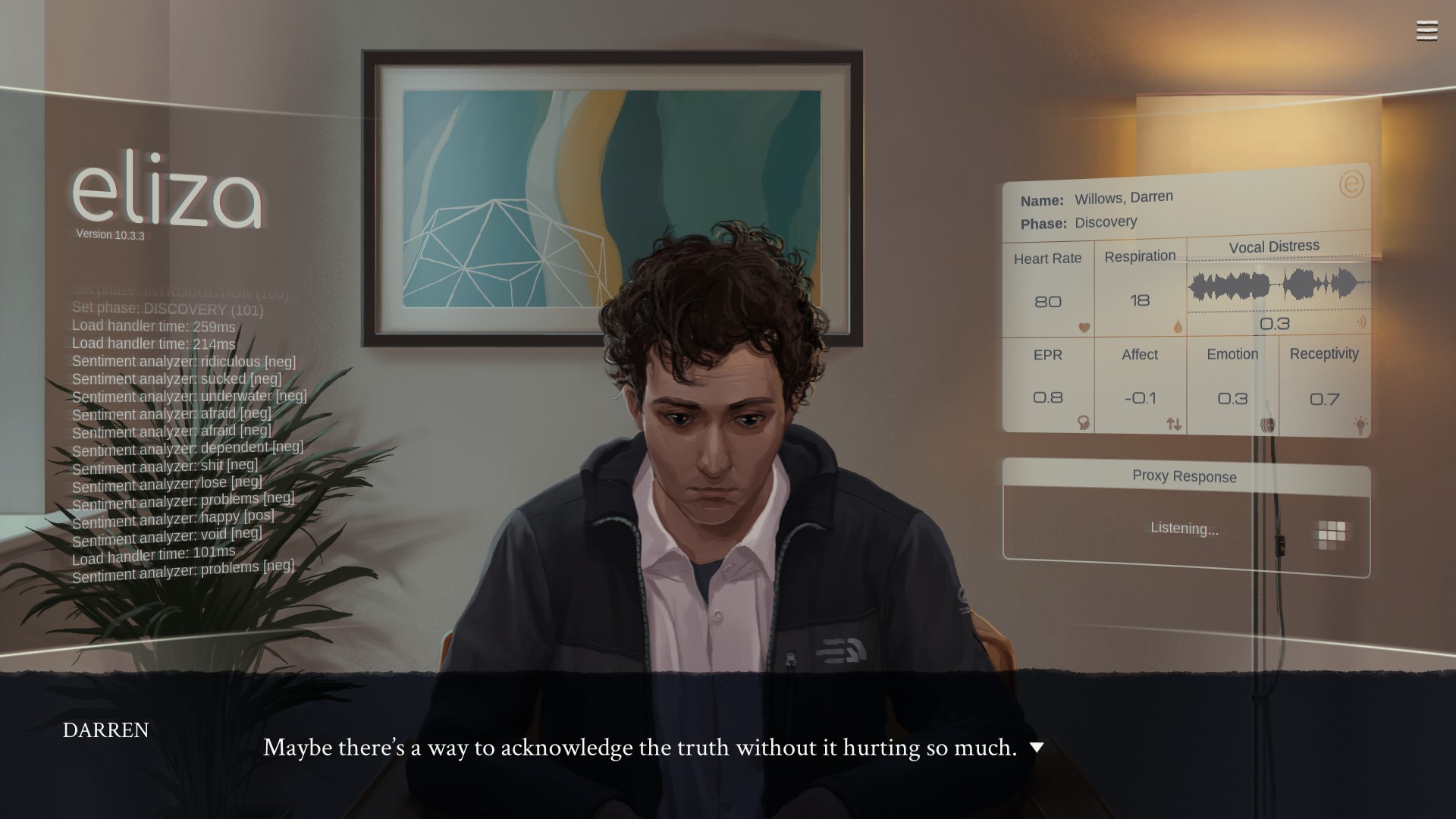 RPS: It seems to me that the game is less of a critique specifically on the technology and more of a critique on that really strict, process-oriented method of therapy. Would that be an accurate thing to say?

If I'm critiquing anything, it's definitely more of the way this big tech company tries to make [Eliza] cover everything as opposed to just saying that it's 100% bad and we shouldn't do this at all. But at the same time, I think it's important to entertain that notion. Should we be doing this? So the game does bring that up. But I would hope that it captures some of those things in a more complex way. 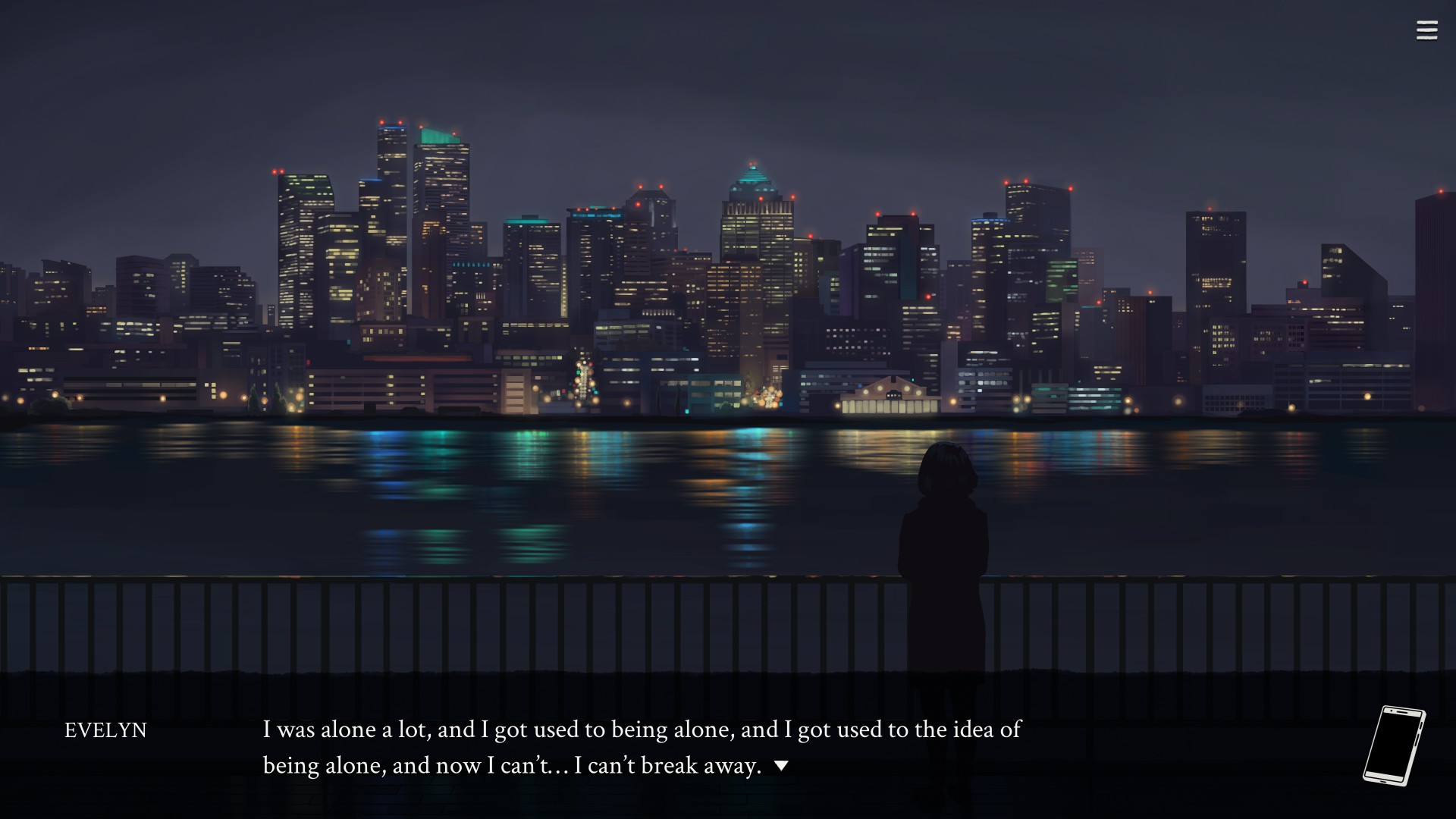 RPS: How do you feel that the game has been received? Are you happy with its reception?

Yeah, I think so. I've been hearing from a fair number of people who have said that they feel seen.. They feel it expressed something that connected with them. And it's been really great to hear that because that's the most I can hope for in making something: that people will connect with it in some way and identify with the characters and say like, “Wow, that's me.” So that's been tremendous. That's been so great. I'm happy that people have found it and have given it the time and space to see what it's doing.

RPS: Do you have any more visual novels or games on the horizon?

Not yet. I'm still thinking about what I want to do next in terms of a more significant narrative game I have. I have some really early ideas, but probably not anything that I can describe. But I absolutely want to continue to make narrative games.