While hardcore multiplayer shooters aren't normally my thing, I find myself dipping a toe into Escape From Tarkov's pre-order beta once a week or so. It's a STALKER-inspired (minus the supernatural bits) hybrid PvP/PvE combat sandbox where teams of mercenaries scour an abandoned city for resources as they clash with both NPC gangs and each other. The main draw for me is how intensely violent the gunplay feels, and the trailer for the next major patch looks to take that to new levels.

Developers Battlestate Games were kind enough to give me press access to the game some time ago. Having just finished an article on STALKER's mod scene when they did, it was easy to draw comparisons between Tarkov and the more simulationist mods such as MISERY. While the full version of the game promises a PvE-focused story mode where you must work your way through the titular city in search of a way out, the current public beta is a purely PvP sandbox of murder and looting, which makes it great for streamers and groups of players, but not really advisable for solo, casual play.

Combat plays out very similarly to STALKER, albeit with a significantly more realistic damage model. If someone strafes your legs with SMG fire, you're going to have to plug those holes and splint up any broken bones if you plan on doing anything more than crawling home on your belly. That said, it also means that nobody is invulnerable, no matter how expensive their gear. See, here's the big twist: If you die in Tarkov, your entire inventory is up for grabs save for a small, special case that persists between lives.

The best way to take advantage of this easy-come, easy-go system is the option to spawn into battle as one of the roaming NPC scavengers. You'll not have anything better than a pump shotgun, but that's enough to kill someone if you sneak up on them. All you've got to do is loot the body and hoof it out of the combat zone and you get to add the ill-gotten goods to your personal stash, either to use in later sorties or to trade in for gear better suited to your personal playstyle. 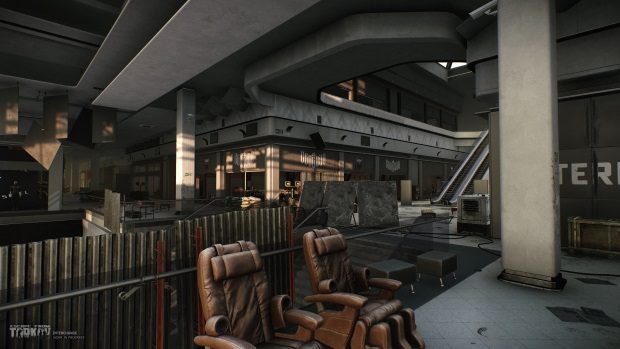 The next update, which you can see in the trailer above and will be hitting servers soon, adds the dense, urban Interchange map, which looks to be a complex warren of potentially lethal environments (including an Ikea store), but also brings the promise of good loot within the map itself. There's plenty of new guns coming in the update, plus more ways to modify your existing gear (if your gun has a tactical rail mount on it, there's probably 20 different things to attach to it), and some exciting new gear like super-heavy helmets that can absorb direct headshots if you can stomach the disconcerting spiderweb cracks spreading across your field of view.

If you want access to the current beta build of the game, you can pre-order Escape From Tarkov direct from the developer's site for 34.99€, although I would personally recommend against it at present unless you've got a good crew ready to roll with you. That said, I'm definitely going to be keeping a close eye on this one - even though it falls outside of my regular wheelhouse, it's an oddly compelling experience, even in this early state.