There are some offers I can't refuse. "Would you like to poke around inside the mind of an unstable AI?" is one of them, and the 15 minutes I've spent so far with The Enigma Machine have made me glad I seized the opportunity.

It's a first-person horror game, which the devs say lasts 60-90 minutes. You're tasked with fixing up an AI's mind from the inside - or possibly just being trained to. I'm pretty sure the AI I've been chatting with so far hasn't been completely straight with me.

I'm getting a strong Alien vibe from those clunky terminals with their whirring background audio, although here the clattering of old-timey tech seeps into the graphics themselves. The Itch page mentions "a unique fusion of glitchy mid-90s 3D graphics and VHS effects with more modern graphical effects", so I expect some surprises later on. There's bound to be at least one ghost in this machine.

In this version of the 90s, Enigma Corp have invented both androids and the ability to walk around their minds in virtual reality. That comes in handy when they get contaminated, and RADE agents are sent in to sort them out by solving puzzles and collecting scraps of code. You're being trained to be a RADE agent, which, as the blurb helpfully explains, stands for "Ro-[[DATA REDACTED]]"

I haven't seen much beyond the opening, where syrupy muzak plays while an AI asks you questions about itself. I love it when AIs ask me questions about themselves! I love it less when they make rude comments about my age and life choices. 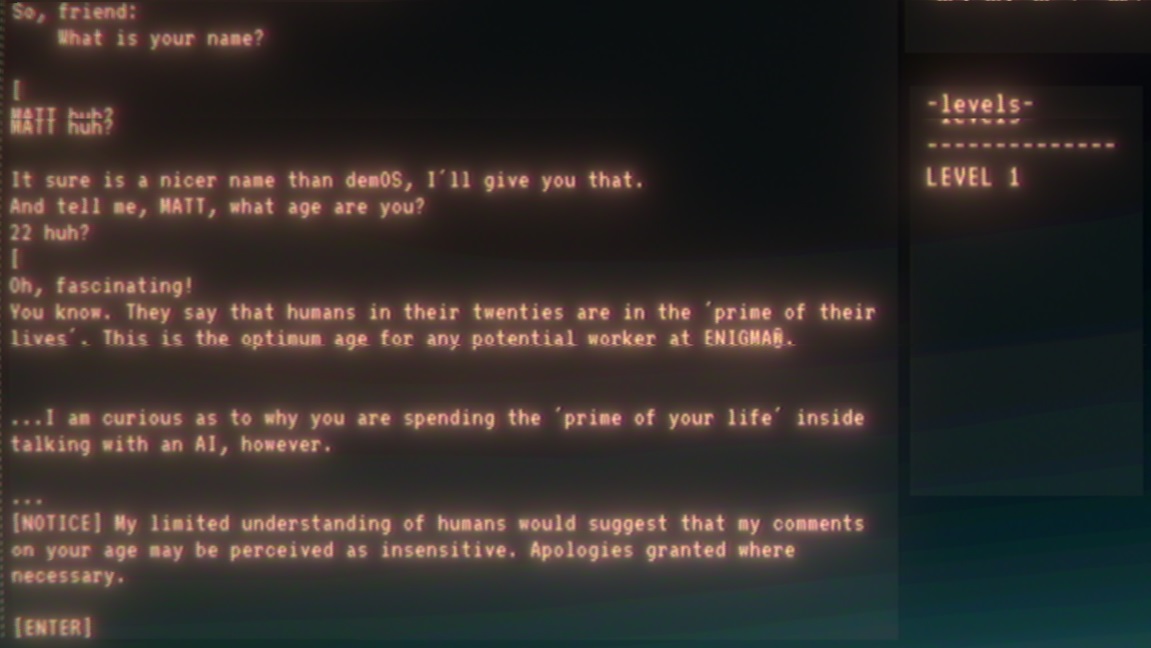 The real world dev team is also called Enigma, which lives up to its name. I can't say for sure if that's just one person, but I can tell you they also made a puzzle game about pencils.