It began with the flickering of vacuum tubes behind the mesh of a derelict radio. A jaunty 1950s melody drifting out. A brief glance from a Brotherhood of Steel knight, and then the scene cuts to black. A decade ago, this was the introduction to Fallout 3. While the sequence bears a striking resemblance to that of 1997’s Fallout, that’s where most similarities end. Fallout 3 was divisive, alienating ardent fans but also drawing in many more with its kitschy portrayal of 1950s culture. The original Fallout weaved thoughtful deliberations about ideologies and morality throughout its plot, whereas Bethesda’s first-person shooter was more intent on building visual bombast and elaborate world-building, about constructing a universe rather than telling a coherent story. That’s where Fallout 3’s allure lay: in smaller, self-contained stories, tucked away in seedy towns and ghastly underground vaults.

One such tale begins at the Republic of Dave, a micronation of sorts hidden within the vast expense of the Capital Wasteland. The self-proclaimed sovereign to this republic (of just nine inhabitants) is the less-than-imposing wastelander, Dave. A man who insists on being referred to as "Mr President" and who claims to have a deep reverence for the sanctity of democracy. In fact, he is just holding a presidential election when the player saunters into his town. He also happens to be the only candidate. Unsurprisingly, he has also bent marital laws to his liking so he can take a second wife, reasoning that doing so will allow him to repopulate and eventually dominate the rest of the wasteland with a drove of little, balding Dave Juniors. 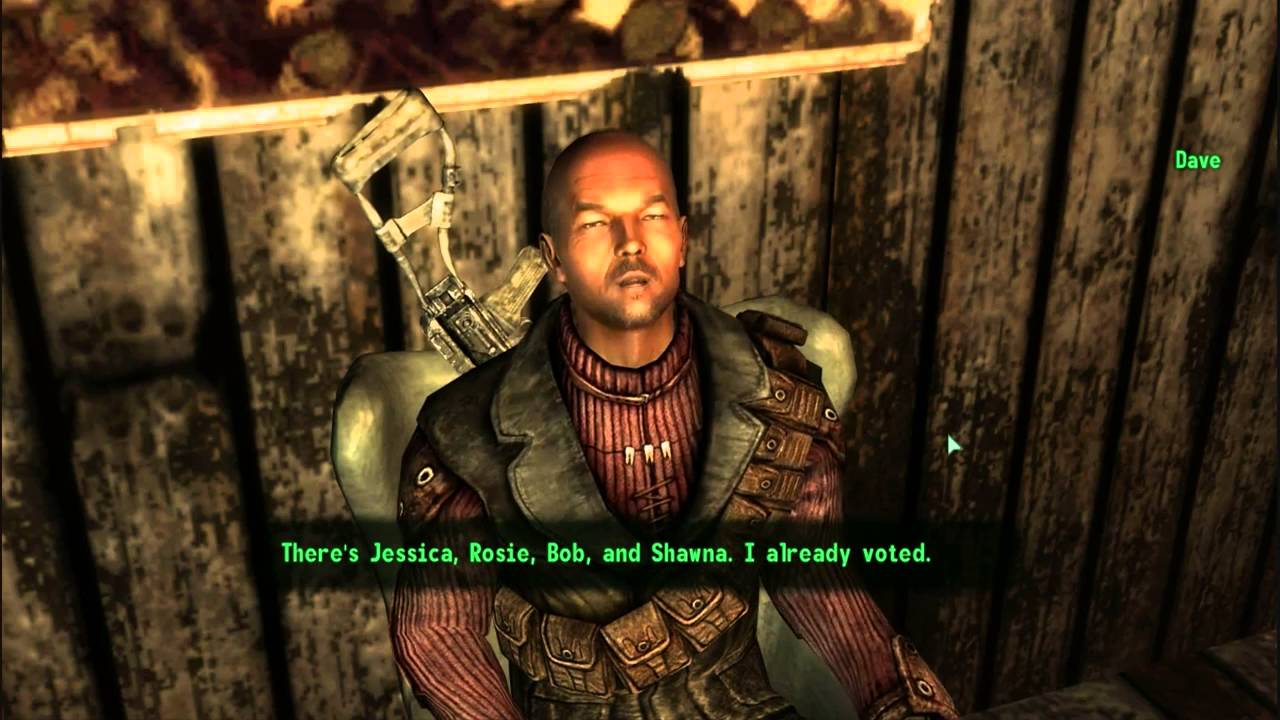 It’s entertaining to mess with the results of the election. If you like, you can encourage another candidate to be the republic’s next president. My favourite alternative is Rosie, Dave’s sorely neglected first wife, who may lead the nation if you convince her to run (while you rig the election results to her favour). The Republic of Dave (or the Democracy of Rosie if she wins) is such a perversion of democracy that it offers a rare glimpse into its predecessors’ pointed critique of America and self-referential humor, making this one of the more memorable joints in the game.

Wander off in another direction, and you may find another settlement called Little Lamplight, a well-run place, miraculously inhabited by a merry band of children, all of whom are no older than 16. The town was set up by kids from a field trip before the nuclear war, who were left to fend for themselves when their adult supervisors and teachers died or abandoned them. After hours of wandering the largely inhospitable wasteland, where even the toughest among humanity struggle to eke out a living, it’s startling to come across this place. It’s hard to reconcile this organised settlement of child soldiers with the chaotic mess of the outside world. Standing guard at the gates, a no-nonsense child mayor named MacCready has been appointed as their leader. The town’s most important law: when a citizen turns 16, they are exiled. 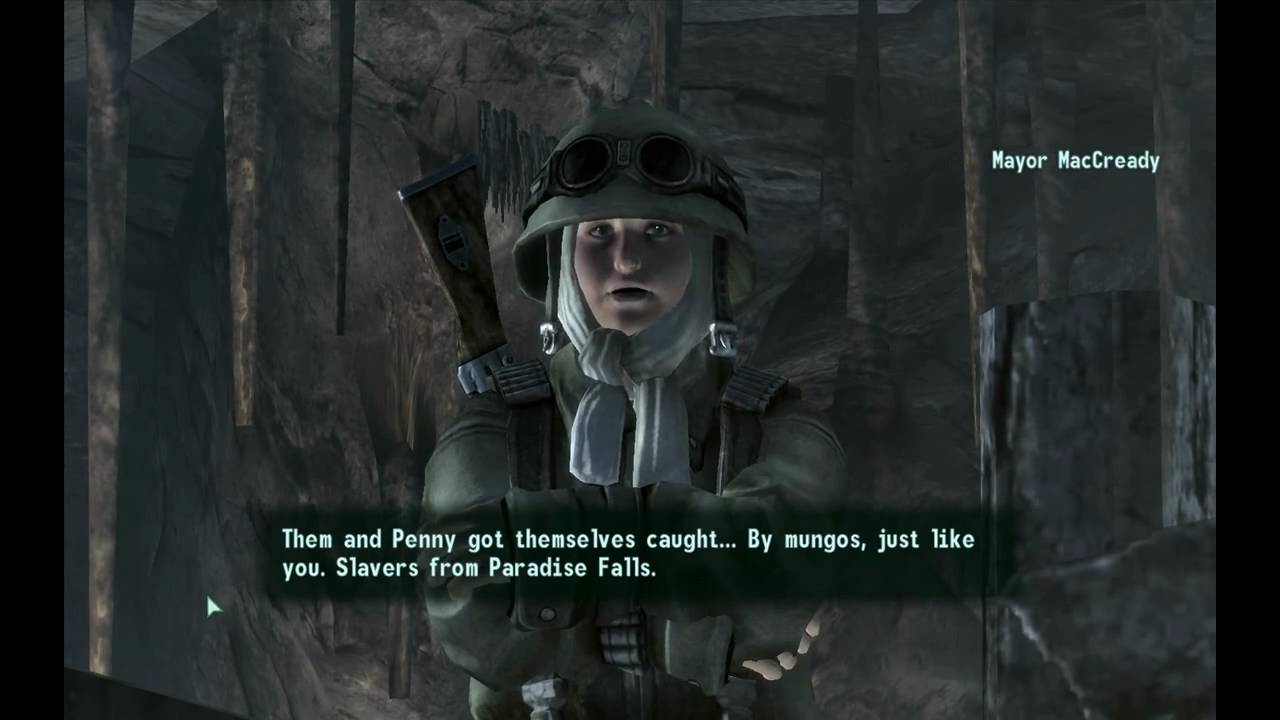 Curiously, it’s never explained how Little Lamplight gets a steady stream of children to repopulate the town, since the nuclear explosion that upended their forerunners’ lives took place about two centuries ago. Maybe the radiation has granted the kids a supernatural amoeba-style means of reproduction? Who can say. This plot hole shows us how Fallout 3’s storytelling often wears thin, but these encounters encourage the player to explore, to uncover more strange towns across the expanse of the wasteland.

Then there is the bizarre superheroic antics of two oddballs, the “AntAgonizer” and the “Mechanist”, at a far-flung town called Canterbury Commons. It’s a delight to stumble on this place. The madcap duo can be found trading comical barbs, preposterously dressed as a monstrous humanoid ant and a janky space robot respectively. They appear complete with the excessive posturing and full-throated laughs you’d expect from a superhero-supervillain tag team.

After pitting their modest army of soldiers (ants versus robots) against each other, the two dart off in a stalemate, swearing vengeance for the carnage. A disgruntled crowd then gathers, staring helplessly at the remnants of the brawl. Some grumble, while a young boy breathlessly tells you all about the commotion. Unfortunately, the rest of the quest plays out in a rather lacklustre fashion. It’s easy to convince both parties that they are just as absurd as the other. But this small flare of wacky superhero fiction makes for a splendid light in the dark, especially in a game so rooted in gloom and cynicism. 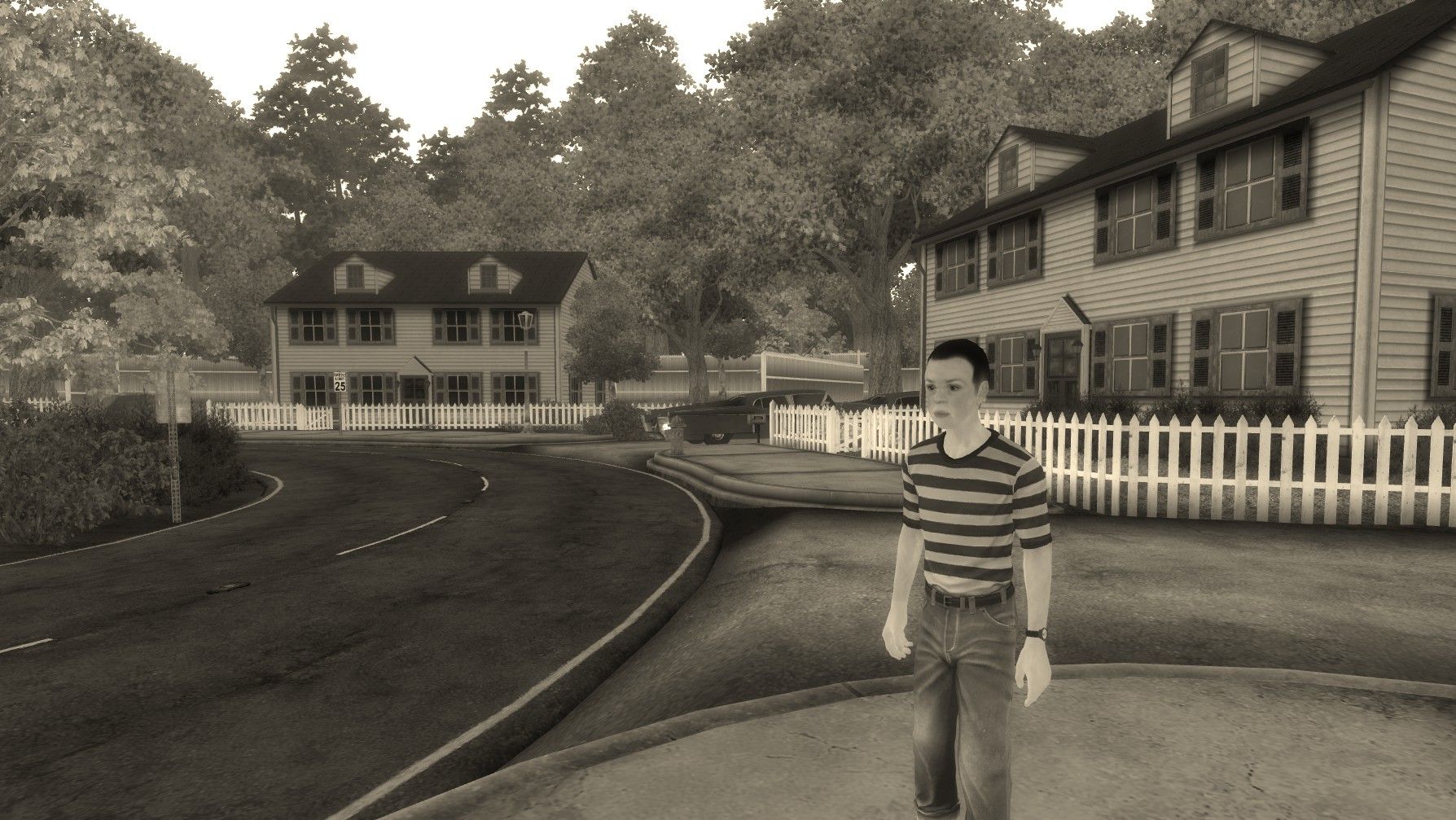 What really takes Fallout 3 off the rails, however, are the vault experiments. From the start, it’s clear that these vaults are a questionable exercise in sadism, and one vault demonstrates this debauchery to the fullest: Vault 112. In this prison, vault dwellers are strapped to chairs (or “tranquility loungers”) and are plugged into a virtual reality simulation, where they live out the rest of their lives in a simulated utopia. Yet their malevolent Overseer soon grows bored with maintaining these simulations. You quickly discover his abhorrent practice of killing and resurrecting his subjects repeatedly for his own amusement. A ghoulish display of egomania that has lasted two centuries. As macabre as it sounds, the only conclusion to this episode is to leave the Overseer trapped in this virtual world by himself, where he can no longer torment anyone else — a painful life sentence.

All these short stories function as signal flares for the richness and depravity of the Capital Wasteland, a place filled with compelling side quests, interesting locations and fascinating characters. It’s a joy to explore, rife with hidden trails and easter eggs you can otherwise miss. For instance, the mournful fate of the McClellan family in an unmarked location (and their rusted Mister Handy) is one of the game’s best secrets. One that’s almost devoid of the heroics and blustering that Fallout 3 is distinctively remembered for.

Even though the game is hamstrung by a vague overarching plot, it remains one of the most memorable games in the past decade because of these discoveries. The Fallout 3 world is probably better traversed when you abandon all pretense of trying to find your father, and wander about the endless wilderness as a roaming wayfarer, discovering these vignettes of humanity’s perseverance after a global catastrophe.