Far Cry 5 continues Ubisoft's on-paper rather charming habit of adding DLC to its games that completely transforms them into something else. Vietnam-themed Hours Of Darkness rather passed us by, but Lost On Mars joined us last week so I thought I'd take a look. It's... it's really bloody awful.

I have no insight into the process that saw Far Cry 5: Lost On Mars developed. But I can imagine one. I can imagine a meeting in which a group of Ubisoft suits got together and meticulously went through all the reviews of all the previous Far Cry games, and created a chart that featured the aspects of said games that were most frequently complained about. Then the boss suit said, "We must make a game that uniquely focuses on these features! But much, much less funny than ever before!" That's how I see things having gone down. 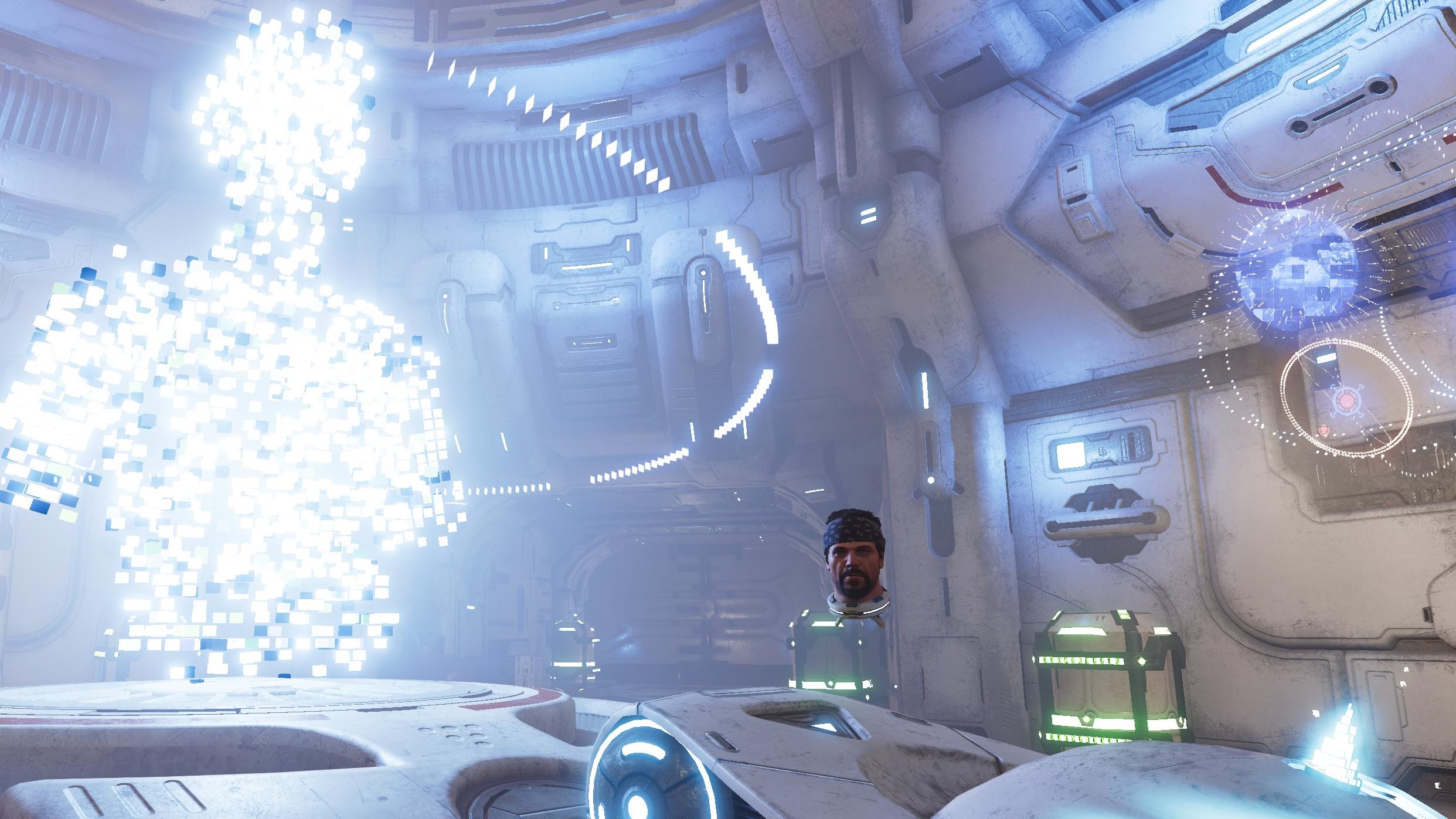 I've never had a problem with climbing towers. I've always been a little bemused by the objection to climbing towers, really. But what I absolutely don't like is when games make a joke about how annoying it is to have to climb towers right before making you climb towers. An inclusion that's guaranteed to annoy anyone who didn't want to anyway, and for those who didn't mind, tells them that the game is being deliberately sub-par. Self-referential criticism is, as it turns out, an indication that you need to not do the thing you're criticising.

Anyway, the towers in this are the worst. They're not about figuring out a route, a little puzzle to solve, but instead just a tiresome series of jumps using the game's awkward floaty Mars gravity. One in particular announces that it will require really specialised use of the gravity belt, a metered jetpack of sorts, but in reality requires sentience and a spacebar to complete. Then of course it also has you attacked by space bats as you climb, because that's always worked out as fun.

The controls throughout are weirdly off. You move far too slowly at walk and run, while the floaty jump is clumsy and tiresome to navigate. There's a wingsuit equivalent, but in the limited heights of this pinprick of a map, it's mostly just a fast way to fall off stuff. It never sat comfortably with me, always feeling like a sludgy trudge, in a way the original game never did. 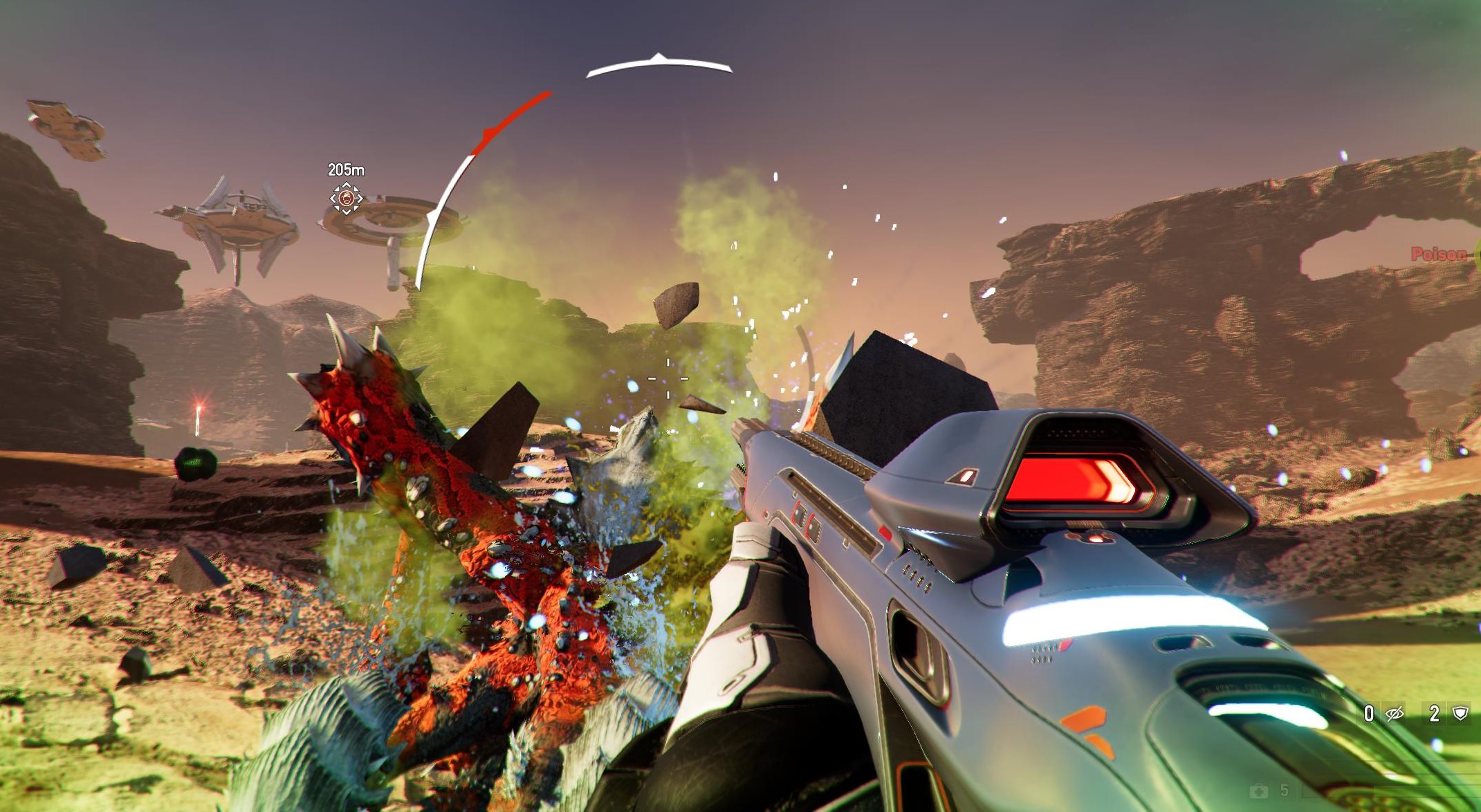 Now, I know Ubisoft and Square are in some sort of octopus-style arms race to see who can interrupt players the most frequently while they're trying to just walk in a fucking straight line, but for the sake of all that's alive, Square, concede defeat to this. The game CANNOT SHUT UP.

The barely-staggering-joke of including Hurk in DLC continues from Far Cries 3, 4 and Primal, but this time he's inescapable. He exists as an NPC floating head/floating robot, to incessantly talk at you throughout, a non-stop barrage of miserably unfunny drivel and sexist crap that appears to think itself HILARIOUS!!! But sometimes it's not content to just force you to listen to him all the damned time - every now and then it forces you to stand still to listen to him, while a door doesn't open for some reason. His lowlarious bants are so important you'll bloody well listen to them. Get through that door and maybe he and the also never-funny robot lady Anne start arguing in your head, at the same time as maybe a surprise enemy attacks. Turn to shoot it and... the game freezes to show me a card warning me that enemies might attack. True story.

So utterly, insanely obsessed is it with interrupting things that it even resorts to interrupting its own interruptions. A voiceover will be explaining how teleporters work, when literally mid-word it'll interrupt her to show you a card explaining, er, how teleporters work. It does this every time! Get through it, start walking off, and oh bugger me backwards another card will have interrupted you again to explain something you've been using for half an hour. 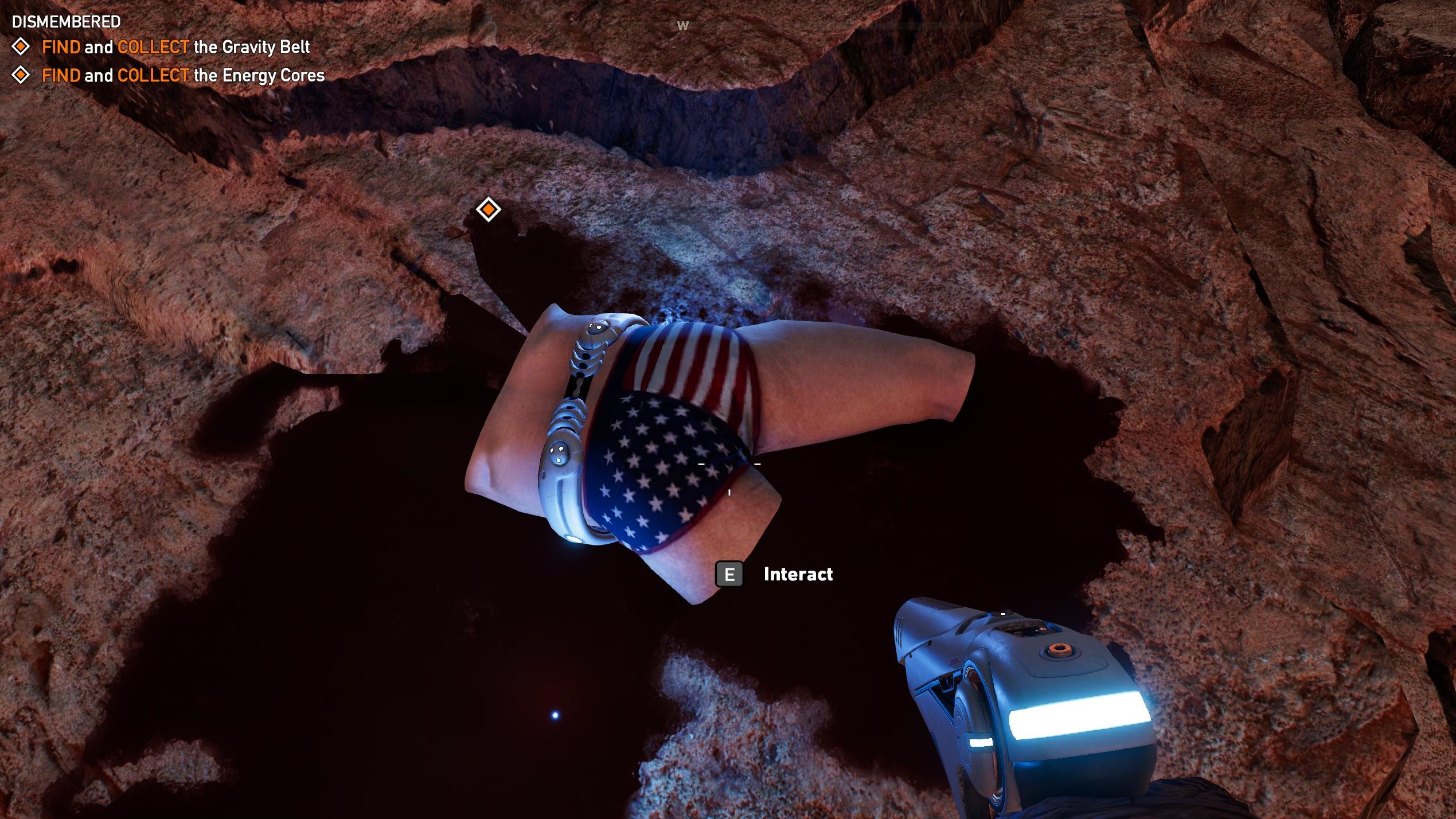 The story, such as it is, is that you are teleported to Mars by an ambiguously motivated robot who wants you to stop the resident arachnid army from being able to invade Earth. You, because your buddy Hurk has invited you, and now you must - er, I dunno - kill aliens until it's done. Along the way you gain weapon and tool upgrades, paid for in alien gloop harvested from kills. You're supposed to loot dead bodies of aliens, but for no understandable reason they often just disappear from the screen, like you're playing a 1997 PlayStation game.

It acknowledges some of its debts, at least, immediately noting that the underground arachnid enemies which pop up and attack when you tread on the sand are a very direct lift from Tremors. Although if there's a reference to Starship Troopers - whose creatures are really very awfully similar to those here - I've not stumbled upon it. But it's all that derivative, seeming to think that by having a character acknowledge this, it makes it arch rather than just copying. It's copying. 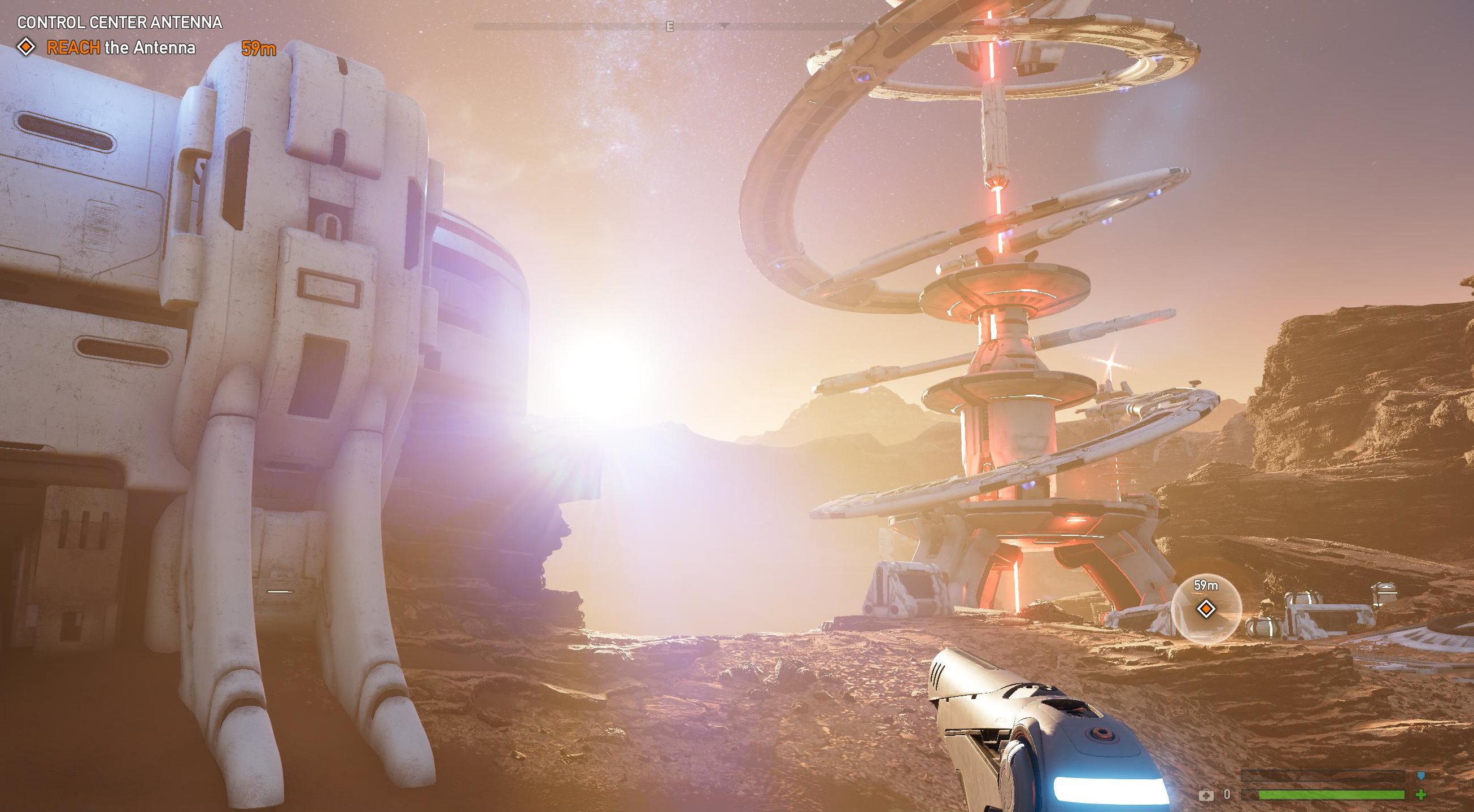 Of course what you really want to know is: Do I get to just go from map icon to map icon having near-identical fights with the near-identical alien arachnids and then switching on a machine?! Yes! Yes you do! Stripping down absolutely anything else that might have distracted you from the true essence of Ubisoft, this is the gaming equivalent of a to-do list. Icon, tick, icon, tick, icon, crash the PC. (Oh yes indeed, I've no idea what the underground sections of Mars look like, because each time I go down them the game spectacularly crashes. One time it managed to switch my monitor off. Like, the power switch. There I was on the other monitor searching for a software reason why it was blank, before noticing that Lost On Mars had somehow just had it commit suicide.)

It provides such a sense of process, such a mercenary dullness to the routine, that I've found myself actively resenting playing it. The tasks are dull, the environment is one colour, the enemies are only distinguishable by colour. The writing is so atrocious that I think Stockholm Syndrome began to set in and when I heard "I have feelings in the testicles of my heart" I thought, "That's not a bad line I suppose." Seriously. I actually thought that. It broke me. 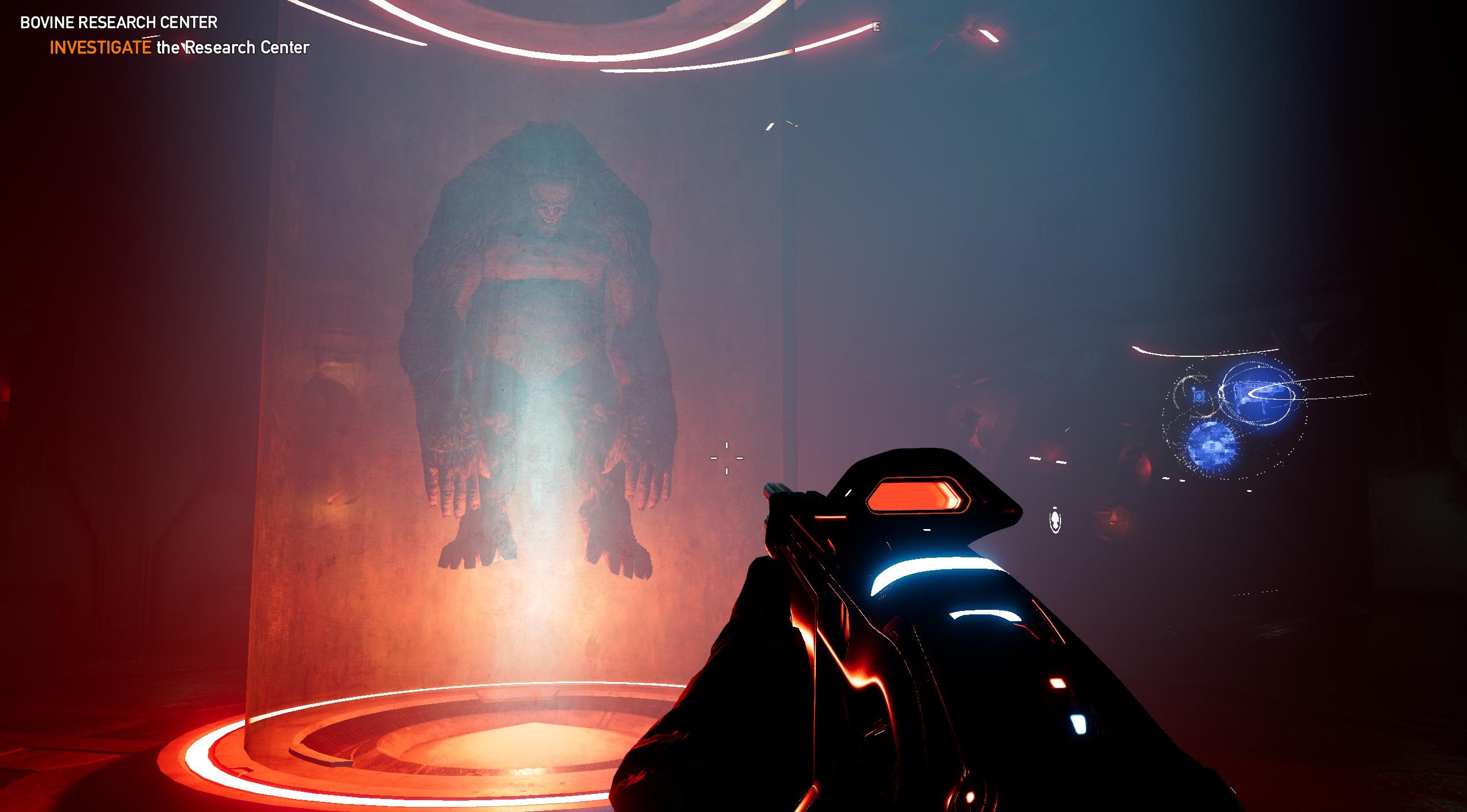 This is such garbage. For goodness sakes don't buy this as DLC, but don't even bother if you were lured into getting a season pass at the start. What a pile of piss.