Fear & Hunger is a horror dungeon crawler by Miro Haverinen that makes Darkest Dungeon look cheerful and forgiving. Originally launched in December and still growing, it flew under my radar until earlier this week. It's merciless stuff - you don't level up. You run, as the monsters can often kill you in one hit, or leave you mangled. Dismemberment is a threat for both you and your enemies, and save points aren't safe. It's rough around the edges, but it's rare that an RPG can leave me genuinely unsettled and hurt, but hungry for more. Grab the demo here or see the trailer and thoughts below.

Warning where due, Fear & Hunger puts every kind of violence on the table, the sexual kind included. Thankfully (at least from what I've played) it's mostly implied or tersely described, but if that's a deal-breaker, fair enough. There are even some monsters with genitalia that can be targeted as you would a limb. Still, it's far from the focus of the game. Mostly, you'll just be wallowing in death, decay and pain. Health and mental state are flat percentages, so 50hp damage means you're half dead, and a lot of attacks hit hard. The turn-based combat is to be survived, not enjoyed.

RPGs are so often power fantasies. You level, you get loot, you slay bigger and bigger monsters - not so much here. Of the four starting characters you can choose from, the Knight is best equipped to deal with the horrors beneath, but even she can die suddenly. While telegraphed to allow you to counter or escape before they land, many bigger enemy attacks ask you to choose heads or tails - flip a coin and discover whether you just lost a party member or a limb. Dismemberment is almost always permanent, though dark rituals can allow you to sacrifice another party member so you can be reborn as a Marriage Of Flesh with a full complement of body parts.

The monster designs are frequently grotesque, but no matter how weird they get, there's always the option to try to talk to them. Sometimes, it even works, and you can end up with some unlikely party members. Expect the unexpected - white each run has familiar areas and the same intentionally vague story threads to follow, the maps you'll explore can vary, along with the loot you find. Death, at least, doesn't feel too frustrating - it's possible to 'win' the game in under an hour, although it'll take a lot more time, effort and blood to really dig deeper into the game, and uncover all its lore. 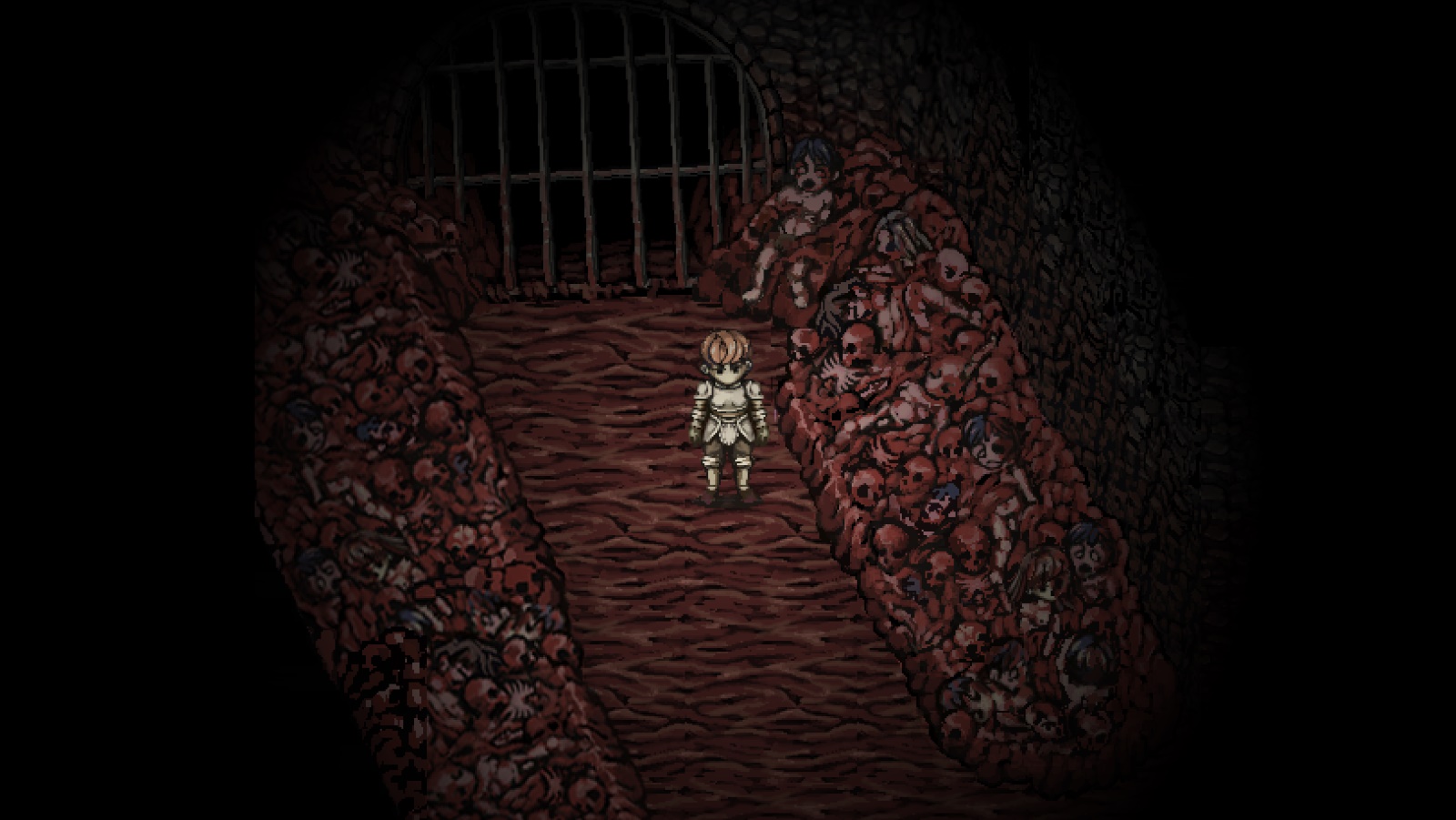 There are some criticisms I could level at the game, of course. Semi-frequent typos in the script sometimes break the mood, the art can vary in quality and some of the more sexual aspects of the horror feel a little ham-fisted. Still, I've never played anything like this before. I'm aware there's a multitude of endings to work towards (almost all of them unhappy), and I know there are major random events that can spectacularly derail a playthrough. The developer also has some dark-sounding plans for future updates - they also like to leave patch notes intentionally vague. This game hurts me, but it's a good pain. You may like it too, just don't say you weren't warned when you wake up without legs.