Brawlers are a misunderstood breed. The descendants of Final Fight and Streets of Rage are easy to dismiss as unfair products of another era, where they stood in arcade cabinets and where seemingly designed to drain your wallet by forcing countless retries against random attack patterns in order to get that one lucky break. But for those willing to learn their intricacies, punch 'em ups can be seen as part of a precise and demanding genre where victory is always possible despite the odds.

While there have been attempts at revival such as Castle Crashers or Mother Russia Bleeds, those offer more style than substance. I dove into recent Steam release Fight’N Rage [Steam page] (debut title from solo Uruguayan indie Seba Games Dev) with some trepidation, but came out the other side overjoyed. Faithful fans of fisticuffs, this may well be the best brawler I’ve ever played, and I’ve played them all.

The gratuitous 90s-ness of the game may be off-putting, admittedly. In a Fist of the North Star-esque apocalyptic world of ruin, pointless NPC deaths, animal-themed mutants and Bodacious Brawling Bikini Babes with Bountiful Bouncing Boobies, it’s up to the Fast Girl, the Balanced Guy and the Beefy Mutant (or all 3 at once in local multiplayer, with AI buddies unlockable) to punch their way through a horde of furious furries and beat down The Boss. Shakespeare it ain’t, but who needs the Bard when the sprite-art is pixel perfect and the soundtrack full of lovely wailing guitars?

What makes Fight’N Rage sing where others merely bellow is the combat engine. Two parts Streets of Rage, one part Final Fight (hence the title), it brings a lot of its own tricks to the table without overcomplicating things. Digital movement and a simple 3-button layout (Punch, Jump & Special) belie a game of shocking depth where every attack can be evaded, parried or countered, and swarms of baddies can be cleared out in seconds, given practice. Every hit lands with a sense of power and purpose, too, with just the right amount of screen-shake to emphasise without obfuscating. It’s a delicately engineered beast. 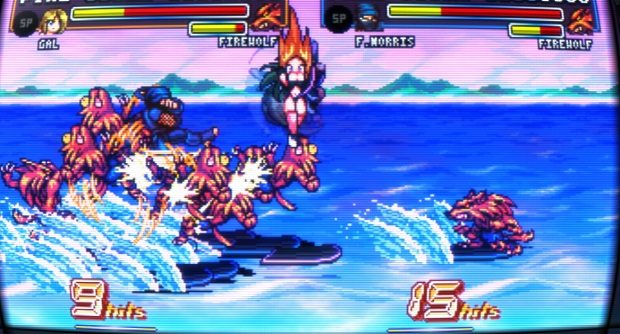 What really sets Fight’N Rage apart is responsiveness. Almost every move can be cancelled out of in some fashion, meaning you’re seldom stuck over-committing to a combo. Basic chains flow automatically into throwing your target forward or backwards, stalling other foes just by holding Up or Down. Every eight seconds, you get one free use of your otherwise life-draining special move, which also chains into and out of just about every other action, and otherwise deadly grapples can be escaped by tapping jump or special at the critical moment. Messy as it initially looks, with practice you can become an untouchable kung-fu demigod.

The story branches a surprising amount, making replays feel fresh while individual enemy attack patterns become familiar over time. You’re unlikely to see one of the 56 endings on your first playthrough, even abusing your infinite continues, but Fight’N Rage accepts failure while rewarding gradual mastery. Your first tries will likely provide enough unlock currency to buy access to the Training Mode - first of many extras - which teaches the finer points of each character. Further attempts will provide enough to unlock Easy Mode if you’d rather ease up on the heat, but true mastery only comes through practice. While an arcade game at heart, Fight’N Rage is expertly engineered and feature-packed for the long-haul.