I've been playing the newly released Fishing: Barents Sea in the hope that it was water-bound cousin to American/Euro Truck Simulator, those bastions of road-tripping relaxation. What I found was something very different. Something remarkable in its own way.

Chilly Norwegian seas, the lonely put-put of a solo fishing boat engine, the methodical laying and collecting of lines - and a sublimely-synthy, ever-so-Vangelis soundtrack as I coolly slice open fish bellies.

As with the Truck Sim games and also the likes of Car Mechanic Simulator, Fishing: Barents Sea lives under an open question. Was it was designed first and foremost as a fairly cheap and very specific sim designed to cater to a niche market, or were its creators fully aware that its looping, unhurried approximation of the humdrum elicits a state of zen calm, that relaxes and reassures where other games stress and frustrate?

There's no clear answer here. On the one hand, it's got bait shops and all these different kinds of fish and boat and very, very, very slow journeys and waiting hours for your lines to catch anything, but on the other it's got this totally unexpected soundtrack that gives it a cyberpunk vibe. The title screen alone made me think I was about to play a lost Deus Ex level:

And there's a full soundtrack of this stuff throughout. As my mind drifts off during another interminable journey across the sea, I can't help but start to imagine this is me eking out a crust at the edges of the world, a last, subsistence light of the Old Ways, a life lived in the gutter of the gleaming techno-cities that I'm sure must lie inland.

Fishing: Barents Sea really fucks me up, is what I'm saying. Another perfect, perfect mystery is why my character's living quarters on the starting boat contain nothing except this hammer on a table. 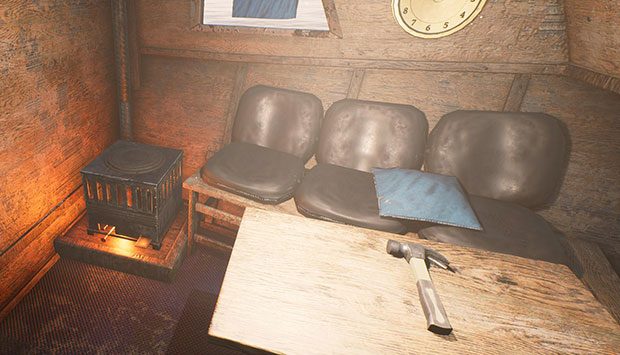 Is it to deal with particularly stubborn fish? Or is it something I have to use on myself once the bombs fall, the oceans boil and the only alternative is a slow death by starvation?

Naturally, I can't stop playing. The minigame elements (there's another for hauling in your catch) are irritating, there's not really anything to be done or seen during free-sailing and it is not beautiful enough to really sell the out-on-the-endless ocean fantasy, though the lights of the harbour towns reflected upon night-time water are most pleasant. Nonetheless, its glacial pace and gentle loop of lay, collect, sell, upgrade has me as hooked as a pollock on a krill line. 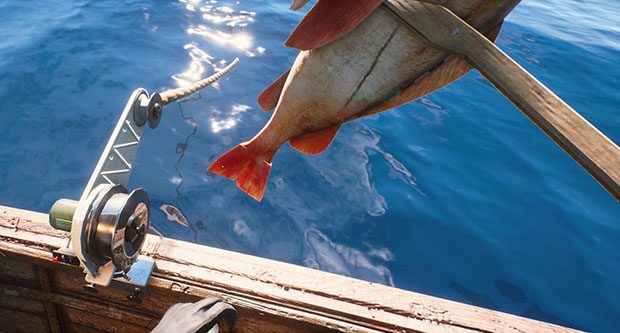 Without that mournful future-world soundtrack, I suspect I'd have sailed on long ago. Instead, perhaps I shall live out my days this way. I've seen haddock shimmer in the dark near the Rypefjord docks. All these mackerel will be lost in time, like fish guts in the rain.

Fishing: Barents Sea is out now, via Steam.