Not an easy week to be a wargame and simulation correspondent. If I bite my lip and try really hard I think I'll be able to rattle off today's column without mentioning the lovely DUSK, but I know I won't be able to get through without acknowledging that cetacean in the room, Nantucket. Released yesterday, Picaresque's piquant and pacy whaling RPG is far too close to that Age of Sail game we've been discussing for years to pass unhailed. I hope it hasn't arrived too late to influence HMS, Every Single Soldier's cutaway captaincy title. 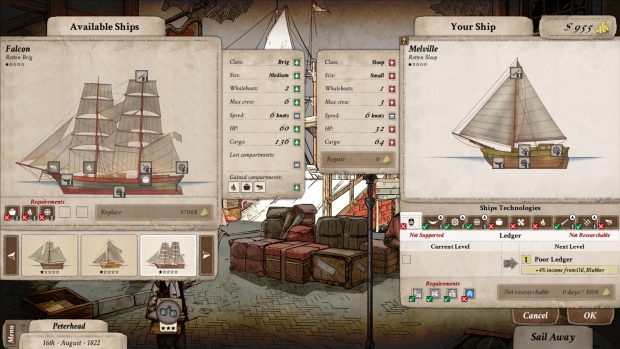 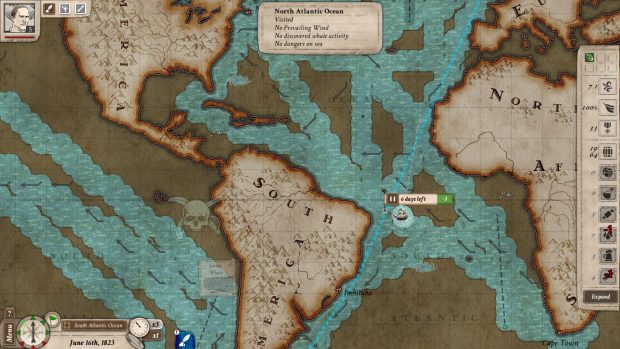 My early experiences were a little different from Adam's. Early on I opted for globetrotting rather than local narwhal hunts, and, possibly as a consequence, found repetitiveness less of an issue. By accepting missions - carry this cargo, investigate this whaling area, find this vanished ship... - and blubber harvesting en-route to destinations, I found I was able to make a reasonable living while travelling the world, nurturing my starting crew, and saving for my first new ship. 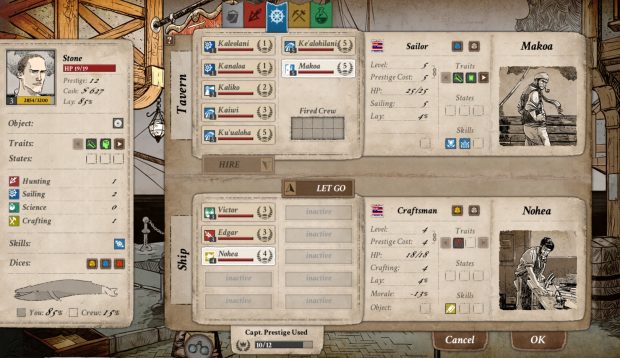 In some areas Nantucket is surprisingly realistic (I've had men go down with syphilis, scurvy and typhus. I've stumbled upon bullying, pilfering, and unspecified sexual shenanigans below decks). In others – notably ship capabilities and crew sizes – Picaresque have sensibly put fun before fidelity. The 'rotten sloop' you start with has a crew of three yet is perfectly capable, if suitably provisioned, of rounding the Horn and making the trip to faraway Hawaii or New Zealand. 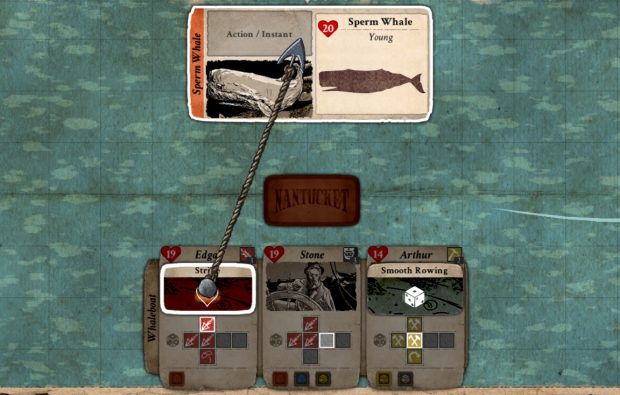 Wallace, my inner wargamer, is slightly disappointed more wasn't made of 'combat' – the whaleboat expeditions that punctuate voyages. He feels the dunkings, fluke slaps, and shark bites might have provoked more thought if they'd taken place on a hex grid. However, he is forced to admit that he can't remember playing a wargame or sim with anywhere near this amount of nautical flavour. Nantucket positively stinks of storm-tossed seaweed, sun-warmed caulking, and boiling blubber. The art, the sea shanties, the missions and random events, combine beautifully. 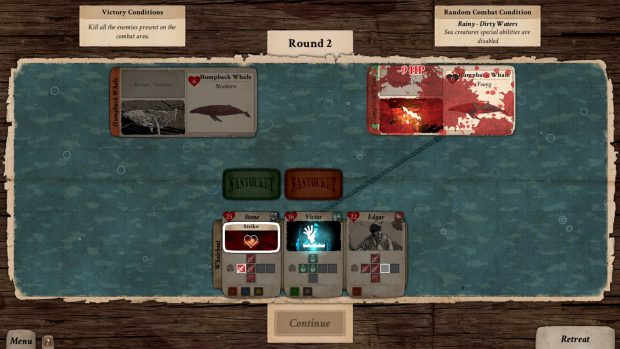 To those worried about buying a game in which your primary method of generating funds is slaying some of the most intelligent, caring and playful creatures on the planet, all I can say is, the historical setting and the heavily abstracted, potentially risky hunts, are powerful qualm quoshers. A modern danger-free whaling sim with LMB-launched explosive-tipped harpoons and 3D cetaceans would be a very different animal. 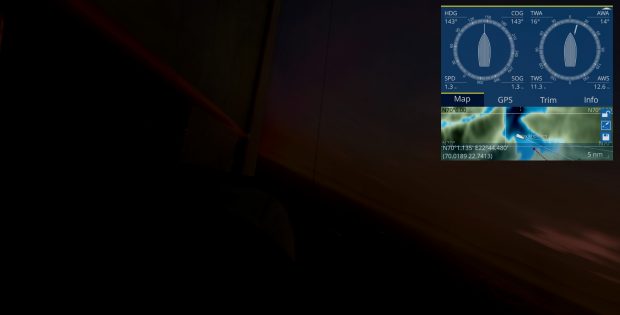 My bedtime reading at the moment is C.E.T. Warren and James Benson's account of British midget sub and human torpedo operations during WW2. The chapter on Operation Source inspired a recent Sailaway factfinding cruise which failed on every level. Like an idiot I teleported my Nordic folkboat into the Altafjord, planning to trace the route the X-Craft took as they made for the Tirpitz's anchorage, without first considering A) Altafjord's latitude, or B) Sailaway's celestial realism. 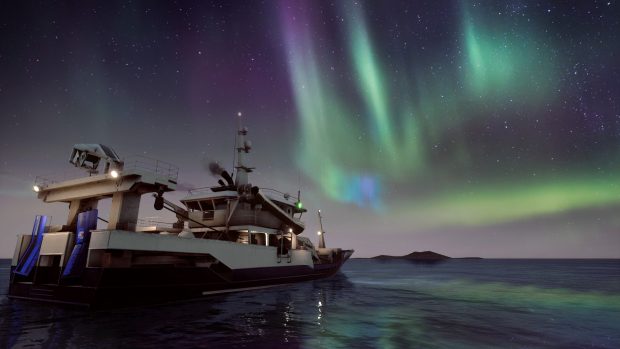 From the “Seasonal time effects and shifting weather” in its feature list, I'm guessing Fishing: Barents Sea, Misc Games' imminent (Feb 7) trawler sim, will also strictly ration daylight during winter months. The work of a Norwegian studio headed by Gøran Myrland, a chap who worked on trawlers as a teenager, FBS exhibits signs of truthfulness and depth that stand out in the shallow, trashy Eurosim sector. I reckon it shows promise. 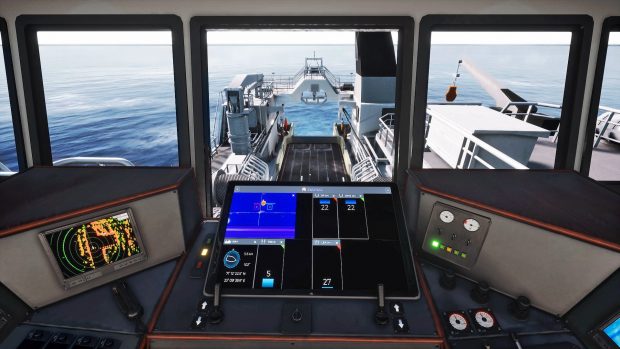 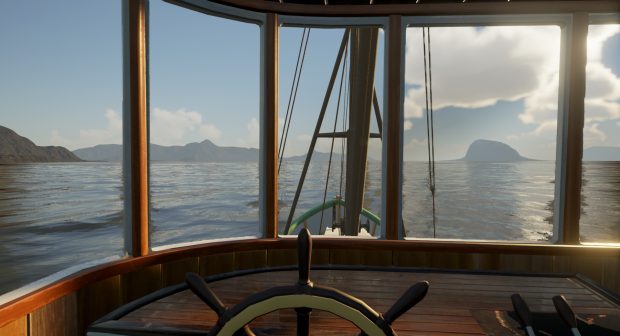 I like the fact that Misc are modelling most of the Barents Sea, not just tiny rectangles of it. I'm intrigued by talk of multiple fish species and fish school AI that takes into account the season and sea temperature. A less committed dev would have given us one generic fishing boat. Misc will provide six, all of which are based on real vessels like the Vibeke Cathrin and the Lunar Bow. Apparently, over-fishing and trawling-related seabed damage are also simulated, so the game is out to educate too. 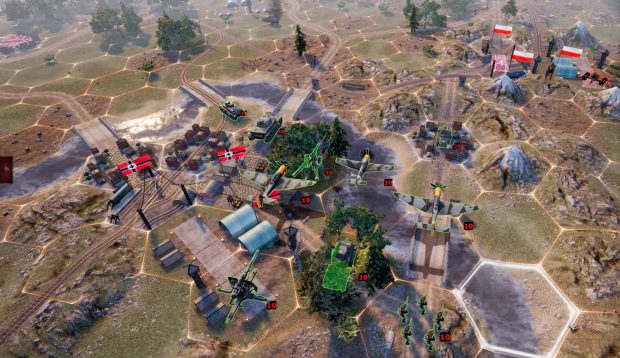 Hard luck, Panzer General. Those dreams you had of an early retirement – days spent feeding wheeling shitehawks and contemplating the Panzergrau sea in some down-at-heel Baltic holiday resort  – will have to be put on ice again. Starni Games, like Flashback/Lordz and The Artistocrats before them, believe your light, hexy approach to computer war, deserves another airing. 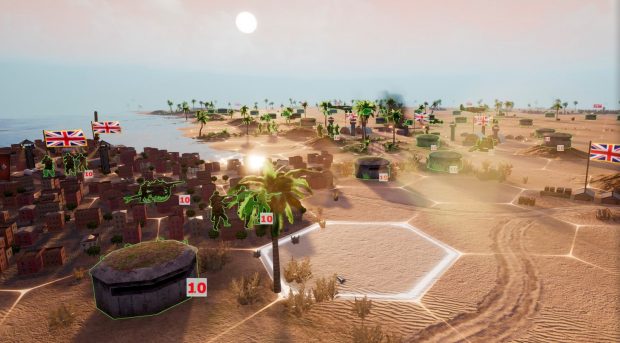 A week or two away from Steam Early Access, Panzer Strategy sweats conservatism from every pore but one. The decision to employ the Unreal Engine ensures there's no danger whatsoever the newcomer will be mistaken for either of its DLC-cluttered competitors. 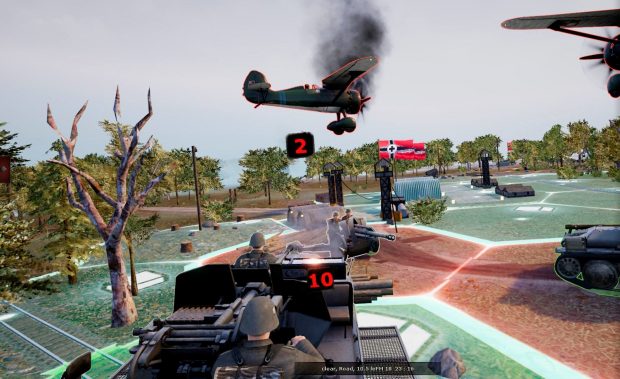 In their public declarations Starni make encouraging noises about logistical depth, campaign replayability, and core force evolution. What I've yet to stumble upon is information about their AI. If computer-controlled forces in Panzer Strategy know how to probe, screen, cut off and fall back (Ideally, without the aid of scripts) I'll happily put aside the preposterously cosmopolitan Open General for a spell. If they don't, my association with this pretty OAP-botherer may turn out to be KwK 37 short. 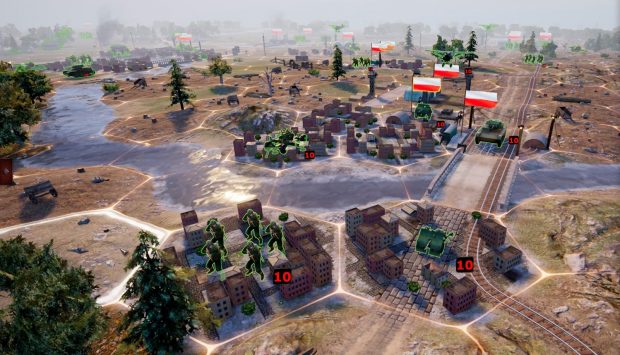 Although the last two Flare Paths were packed to the gunwales with developer sitreps, there's still a host of sim and wargame studios still to share status reports. Today Steve Grammont of Battlefront.com looks to the future and explains why 2017 was a relatively cheap year for Combat Mission completists. 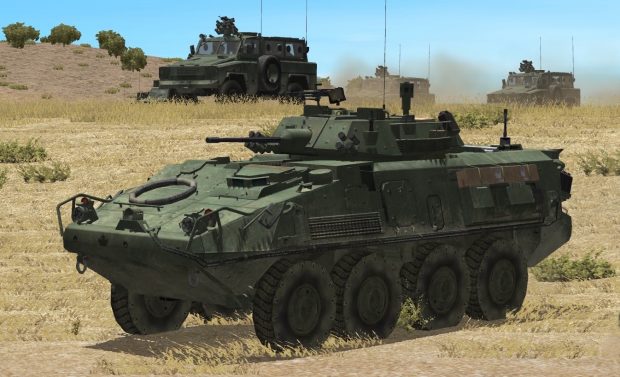 “2017 marks 20 years since we started Battlefront, which puts us into a very select group of game developers which have made it through two decades of often brutal changes in the marketplace.  We’ve succeeded in outliving our mentors and peers by constantly tailoring our development strategy to reality.  The primary reason we’re able to do that is we’re responsible only to our dedicated customers, not investors or fickle mass market dynamics.  The message we’ve received year after year is “take your time and do it right”.  The most important part of “doing it right” is not going out of business ;-)

Last year we started outsourcing more critical work than ever before.  We’re extremely fortunate to have a bunch of people we trust will do the work right and who trust we’ll pay them for their efforts.  This shift in strategy allows us to work on more things simultaneously without putting ourselves at risk from the #1 killer of game developers… unsustainable payroll.  If you’ve ever wondered why games are rushed to market incomplete, buggy, or otherwise unfit for release, you now know why. 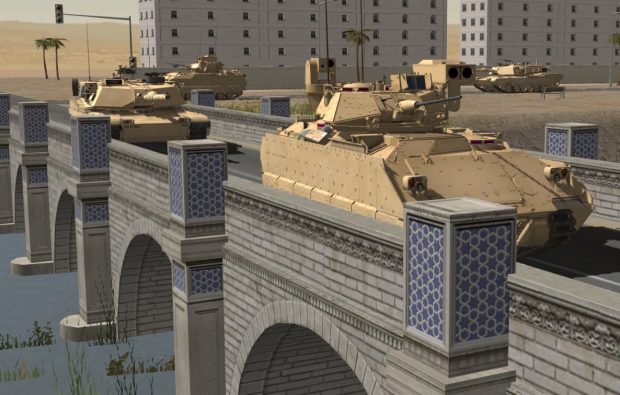 The downside of our 2017 shift (there’s ALWAYS a downside) is product release dates all went out the window.  The good news (there should always be good news, right?) is that this means 2018 is going to be a very busy year of releases for us.  We’ve got the revamped and improved Combat Mission Shock Force 2, the Rome to Victory Module for Fortress Italy, and an unexpected package for the New Zealand Defense Force getting into the final stretch at the same time that we’re ramping up on the first Module release for Red Thunder fans.  More things are in the works we’ve not talked (much) about, but I guess we should leave something for a future Flare Path posting!”