A lot of people are comparing DUSK to Quake. They're not wrong to do that; there are enough brown polygons and chunky weapons to bring back memories of nailguns, ogres and Trent Reznor's ominous drones.

My mind turned to Blood though. DUSK begins with b-movie horror tropes as chainsaws whirr and cultists shriek threats, and from there it takes a tour through pretty much the whole of nineties shooters, as I remember them.

Currently in Early Access, DUSK is unashamedly retro. It's a first-person shooter like they used to make 'em, or at least that's the intent. The good news is that it manages to avoid being the retro game equivalent of an observational comedy stand-up, hoping that simply jogging your memory will provide sufficient entertainment.

“Remember rocketjumping?” Such a character might say, sweating in the club's cheap floodlights and nodding to a chap in the front row. “They discovered how to do it by accident, didn't they, sir? The players. It wasn't intended to be a workable tactic.”

Somebody at the back of the room scoffs.

“This lady just remembered the first time she telefragged her old man. What a palaver, eh?” 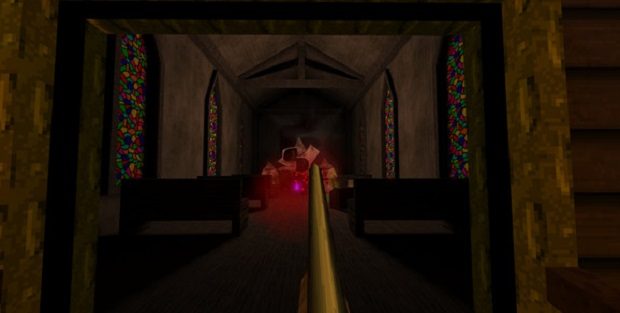 DUSK has too much energy to fall into that trap. As soon as the first scene fades in, you're being attacked. No build-up, no plot to speak of, no table-setting. There are angry people trying to murder you in a basement.

And then there are coloured keys to collect and secrets to discover, and hordes of monsters to kill. Hordes might be a bit strong actually. DUSK has open areas where you could pack in masses of its murderous scarecrows or Satanic goats, but I've been spending most of my time indoors and underground, squeezing through corridors and tunnels, and taking on what I'd describe as gangs of enemies rather than mobs.

The main difference between this and Quake is the setting. If I were to ask you what the setting of Quake is – the first one, not the Stroggy sequels – what would you say? It's crusty, rusty, Lovecraftian medieval sci-fi, isn't it? There are teleporters and lightning guns, but there are also knights in armour with swords, and those ogres with grenades in one hand and a chainsaw in the other. The level design is fairly abstract. Sure, this place might be a lab or a storage facility, and that might be a castle, but what do any of them really have to do with one another? 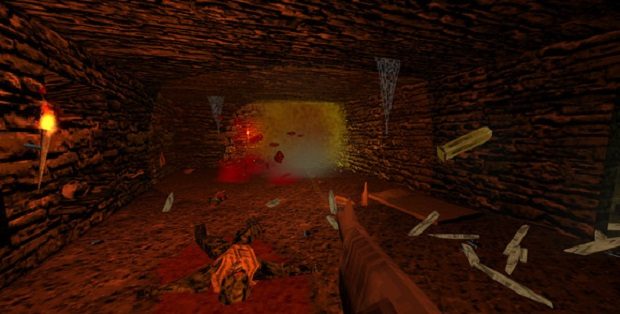 DUSK is much simpler. There are farms and churches and houses with working sinks and toilets. It's using a relatively lo-fi visual design to describe real places, and I like that. It's fun to shoot a cultist in a kitchen and then throw a block of soap at a goat, just or kicks.

What is lost, in that leap toward more recognisable environments, is the convoluted maze-like architecture that sometimes defined Quake. As the levels roll by, DUSK does start to explore stranger places, but it feels more straightforward than many of its inspirations, for better and for worse.

And Blood is absolutely one of those inspirations. DUSK isn't as cheeky as the Build Engine splatterfest but it's soaked through to to the bone with many of the same horror tropes. It's neither a spoof nor seriously scary, but it feels sincere in its embrace of the tasty schlock that makes up its environments and enemies.

But you probably want to know how it feels.

It's hard to describe 'feel'. I can say that Quake was fast and just the right side of floaty, but I think the level design plays as much a part in that as some nebulous 'feel' to the movement and shooting. A badly designed level can kill the feel as quickly as my nineties mixtapes* can kill a party.

DUSK's levels aren't badly designed. The more I play them, the more I think they might be very well designed. At one point, I fought my way through cellars and caves, found an underground temple-dungeon, and figured I was near the end of the current level.

To my surprise, opening a door led me back to the beginning of the level. I'd found a secret and gone through the whole thing backwards, tying myself in a knot.

I love that. The levels sometimes seem quite simple, a few buildings connected by paths and open spaces, but there is so much to discover beneath the surface. And the open spaces are often imaginative as well, particularly an early cornfield in which the scarecrows absolutely definitely do not re-enact that one recurring nightmare I had when I first watched the Wizard of Oz. The odd thing is that for all that I like about DUSK, and there is a lot to like, I'm missing something. Maybe it's 'feel'. Maybe I won't be able to put my finger on it, but I'm going to try.

Quake, Blood and even Rise of the Triad made me feel like I was teetering between godhood and death. In a split second, I'd go from almighty dispatcher of demons and other bad sorts to a stain on the floor. They were empowering even though death could come quickly, and there was a fragility to my character.

DUSK feels much more methodical in comparison. It's more ambitious than it looks, seemingly planning a grand tour of all the first-person shooters you might remember rather than trying to emulate one of them. It definitely isn't that comedian I described earlier, simply riffing on nostalgia, but it does feel a little reconstructed. Not formulaic, because it has its own tone and some wonderfully inventive level design, but there is a predictability about it. That's not necessarily a bad thing; I am very much enjoying rediscovering my reflexes, and DUSK is as good a take on the games of my youth as I've played in a long time.

But I don't find it thrilling; I find it comforting. And that's a very odd thing for a game about killer cultists to be.

That's the singleplayer though. The multiplayer, which I haven't explored all that much, seems like it might be very thrilling indeed. It's much more demanding, because people are quick and unpredictable, and makes use of verticality in ways that I hadn't even considered while playing the campaign.

I'm going to rope someone in for a few games so we can deliver some kind of verdict about just how good that multiplayer feels.

DUSK is available via Steam for Windows and is in early access.