If you click on a link and make a purchase we may receive a small commission. Read our editorial policy.
Developer: David Szymanski
Publisher: New Blood Interactive

DUSK rather undersells itself when it declares it's "straight outta the '90s". While absolutely going for that Doom/Hexen vibe, with outstandingly fast movement, gorgeous chunky pixel enemies, and big meaty guns that pack a punch, it also has a really quite fantastic amount of good sense where not to be faithful to those mid-90s gibby times. If anything, DUSK feels like the FPS that id, 3D Realms and Raven would have made if they'd only had the tech. 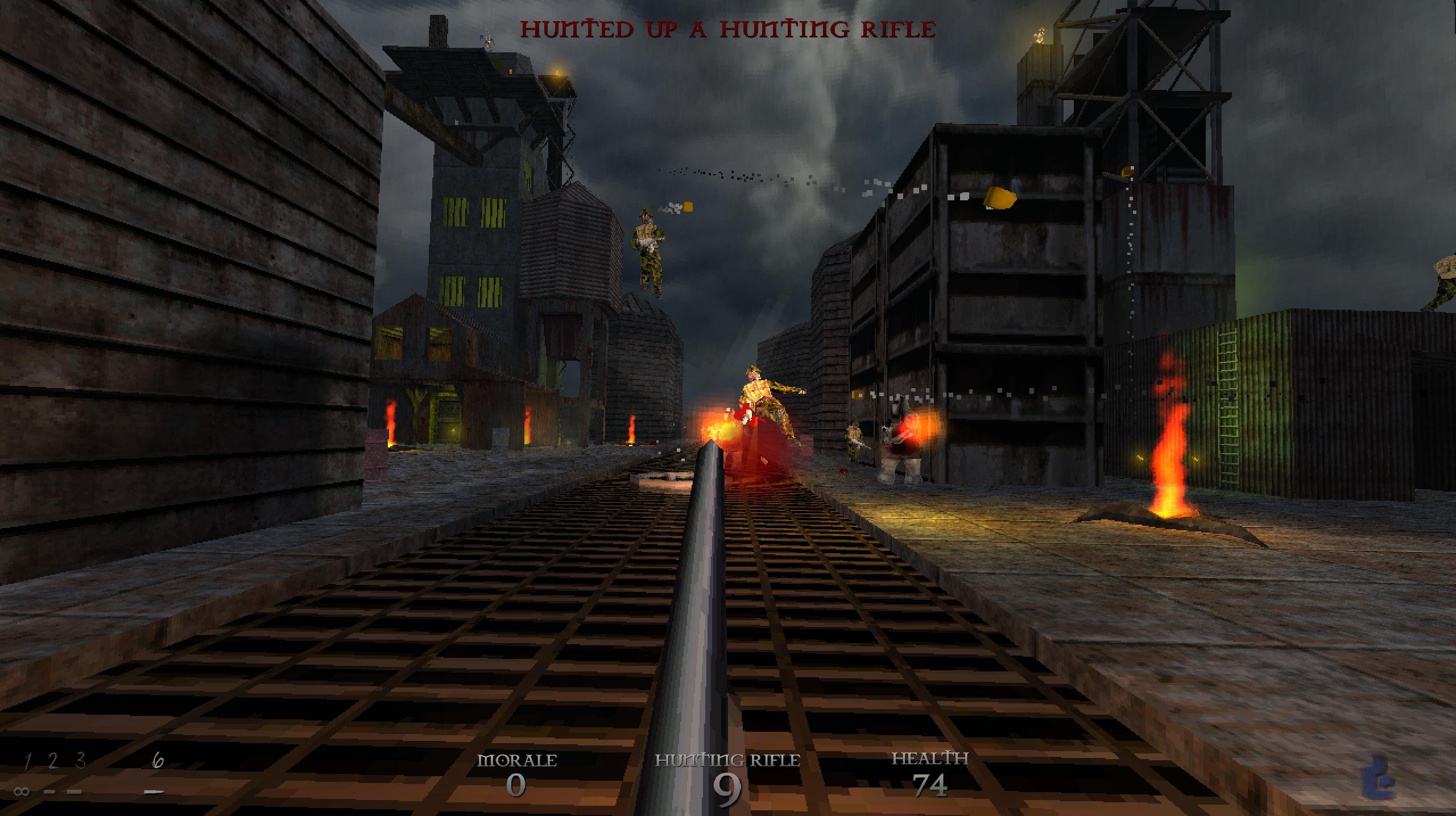 Despite this, straight away DUSK invoked memories of Gaming Past in an astoundingly visceral way. It wasn't the spoof DOS loading screen ("fakeDOS 6.66"), because that's been done plenty, but the sound accompanying it. A perfect emulation of the scrunchy hard drive noises that accompanied 1990s game booting. I winced at the memory. So perfectly evocative. Then you've a Doom-like menu screen, complete with options to switch the level of pixellation to your retro needs. It defaults to 2x, which does the trick for me - gives it the look, without being needlessly blurry. It calls 5x "Summer of '94" for the purists, and then at 8x you're in Game Boy Advance territory. After this you pick which of the three campaigns, a la Doom et al (sadly they've not decided to truly emulate the era, and aren't giving away the first campaign as shareware), and you're off into frantic high-speed shooter land. Hooray!

So yes, a lot of sops to the retro vibe, and yet, as I mentioned, it isn't mindlessly faithful to the notion. In many splendid ways. For instance, there are physics in here - you can knock over barrels, chairs, and the like, and indeed pick up items and move them around to create impromptu climbable routes to hidden areas and rooftops. Also, you can pick up pipes, boxes, saw blades, soap... and so on, and throw them at enemies as improvised weapons in times of sparsity. And of course there's mouse-look, a jump, a crouch, all the things we always forget weren't part of the first shooters. The result is a classic-feeling FPS that feels like it should absolutely be from 2018, and a completely brilliant time. 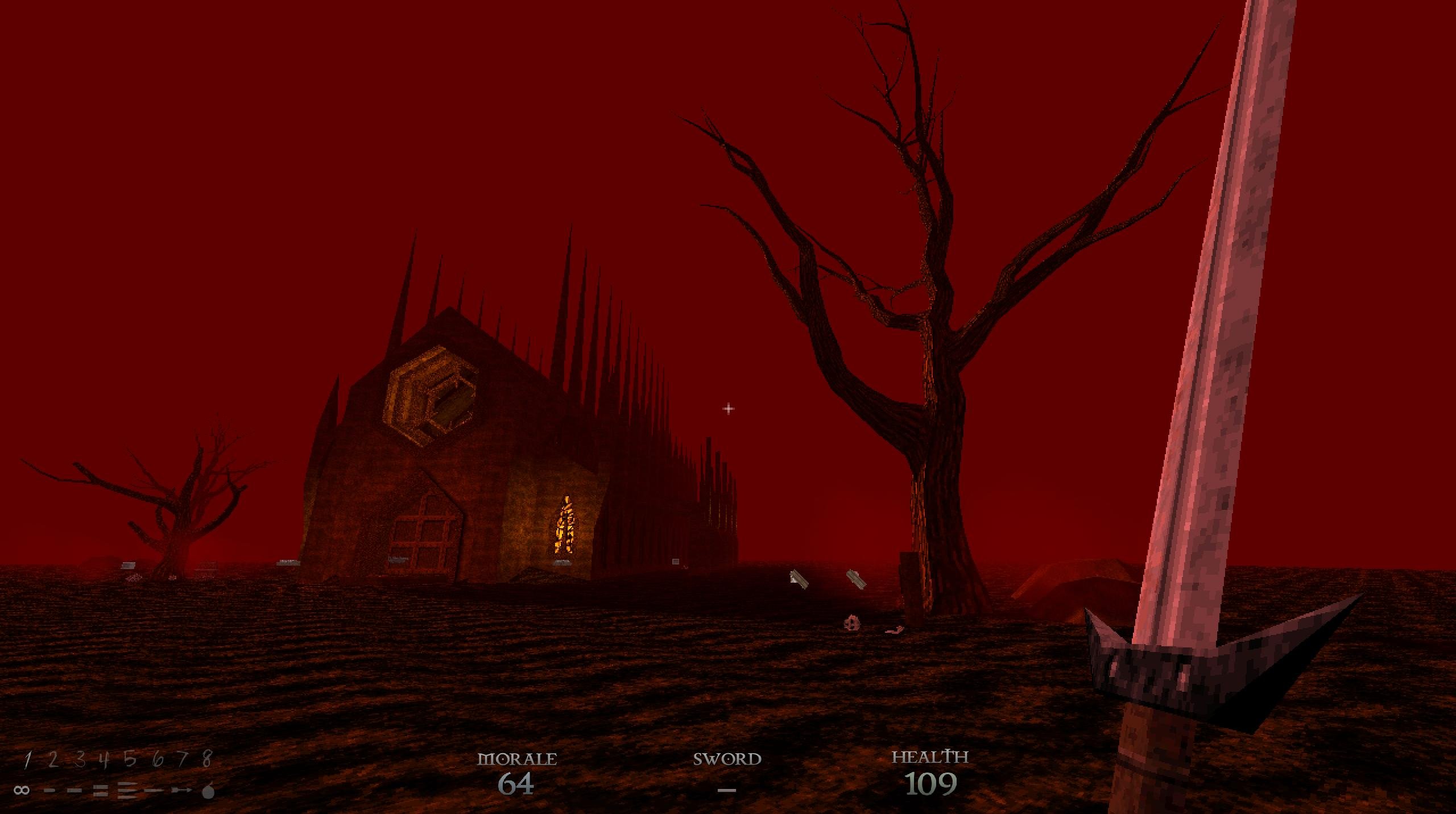 Set in the often dream-like world of Dusk, the three campaigns offer a total of 32 levels, each distinct, often disturbing, sometimes disgusting. But most importantly of all, increasingly imaginative, from the quite straightforward opening campaign of The Foothills, to the much more complicated, multi-routed, and elaborate maps that make up The Facilities, to the completely batshit bizarro unwordliness of The Nameless City. It's a game that starts off great, and then gets better with every level, until its massive climactic apogee. You don't often get to say that.

As to why you're there? Don't sweat the details. There's a really decent amount of environmental storytelling going on in there, but this is primarily about collecting all the coloured keys to open all the marked doors, and reach the end of the level to start the next one. As it should be. And along the way, you're going to want to seek out every last secret, not just to make the level's closing summary screen feel more satisfying, but because the loot stashed away in them can make a big difference. So hooray for pressing E on suspicious looking walls, or trying awkward jumps to reach distant ledges, revealing hidden caves and alcoves. 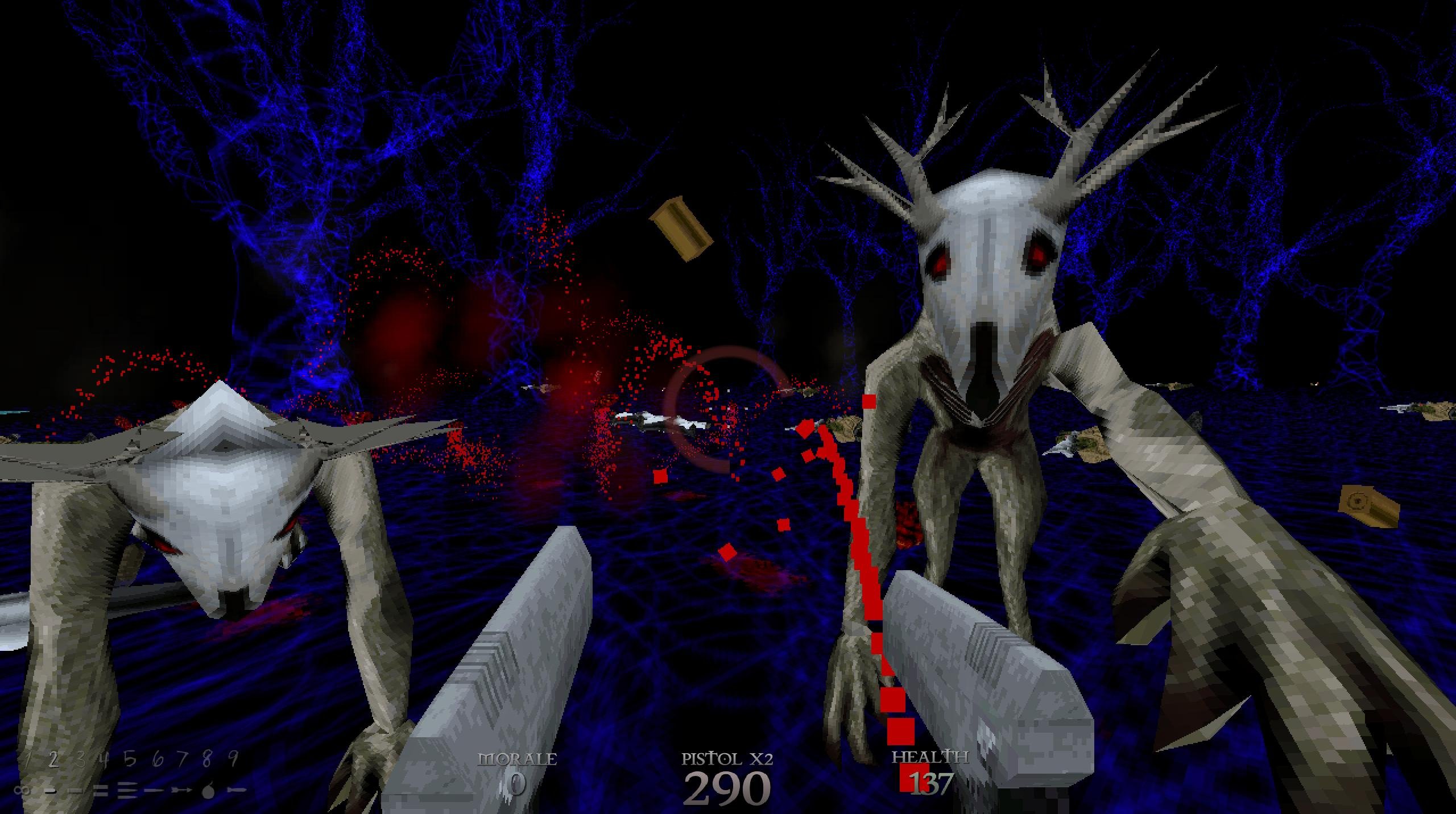 Of course, a shooter lives and dies on its, well, shooting. And oh boy, that's not a worry here. I love this game's weapons in the same way I loved Doom's. Yes, really. I now think as fondly of the Crossbow and Riveter as I do the Plasma Gun and the Chaingun. Admittedly DUSK has nothing that can compete with the BFG9000, and is a smidge on the nose with its Shotgun and Super Shotgun, but then Doom didn't have sawblades you could awkwardly pick up and carry about, then use to slaughter absolutely any monstrous creature with a careful throw. It certainly didn't have lethal bars of soap. Most importantly, each weapon feels distinct, packs its own unique punch, and a huge part of the fun is working out which is best for each enemy type, and juggling them all in larger fights as you switch back and forth.

The same goes for said enemy types. Sure, they don't quite match the Cacodemon for iconicity, but the chainsaw wielding Leathernecks are pretty unforgettable. Fireball launching Mages provide entertaining fodder, and the Possessed Scarecrows are absolutely bloody terrifying as they suddenly jump down from their crosses. Even scarier are the godforsaken Horrors with their ghoulish stretched heads and cartoonishly raised spindly arms, spitting green bile as they run far too fast toward you. Wendigos are skeletal dog-deer monstrosities that are invisible until the first time you hit them, their presence known only by their dreadful sound and bloody footprints - they made me jump so many bloody times. And there are many more besides, including the terrifying Cowgirl, but they are yours to discover as you go along. 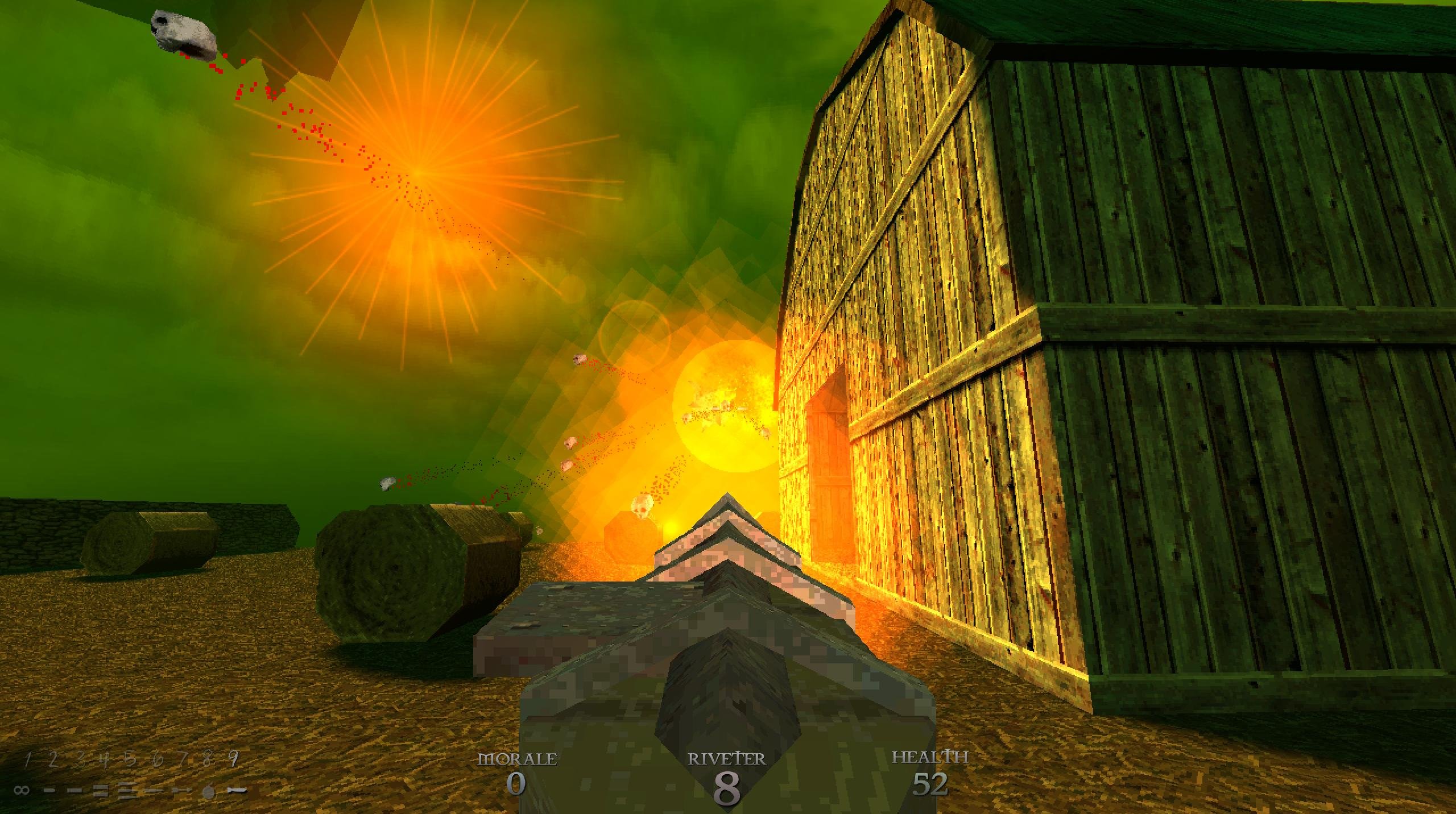 And yes, it made me jump. I don't jump! I don't know if I'm broken or just immune from far too many horror movies, but I barely ever have that reaction to jump-scares and the like. Not here though! And not because the game's a dick about it either, building up fear or any of that - it just has fantastic surprises, really stupendously well delivered moments where enemies appear from false walls and the like, that made me absolutely startle, and then laugh. And oh gosh, this game made me laugh. There's an enemy type that appears over halfway in so I don't want to reveal it, but every single time it appeared I laughed out loud.

This is all emboldened by a metal soundtrack by Andrew Hulshult. I'm not going to pretend to appreciate such noisy noise, but this is the guy who composed for Rise Of The Triad, Brutal Doom and Quake Champions, and it's an excellently varied score that is often exquisitely apposite to the tension of a level. Also, it frequently puts down the guitars and picks up the gothic choirs, and these moments are marvellous. 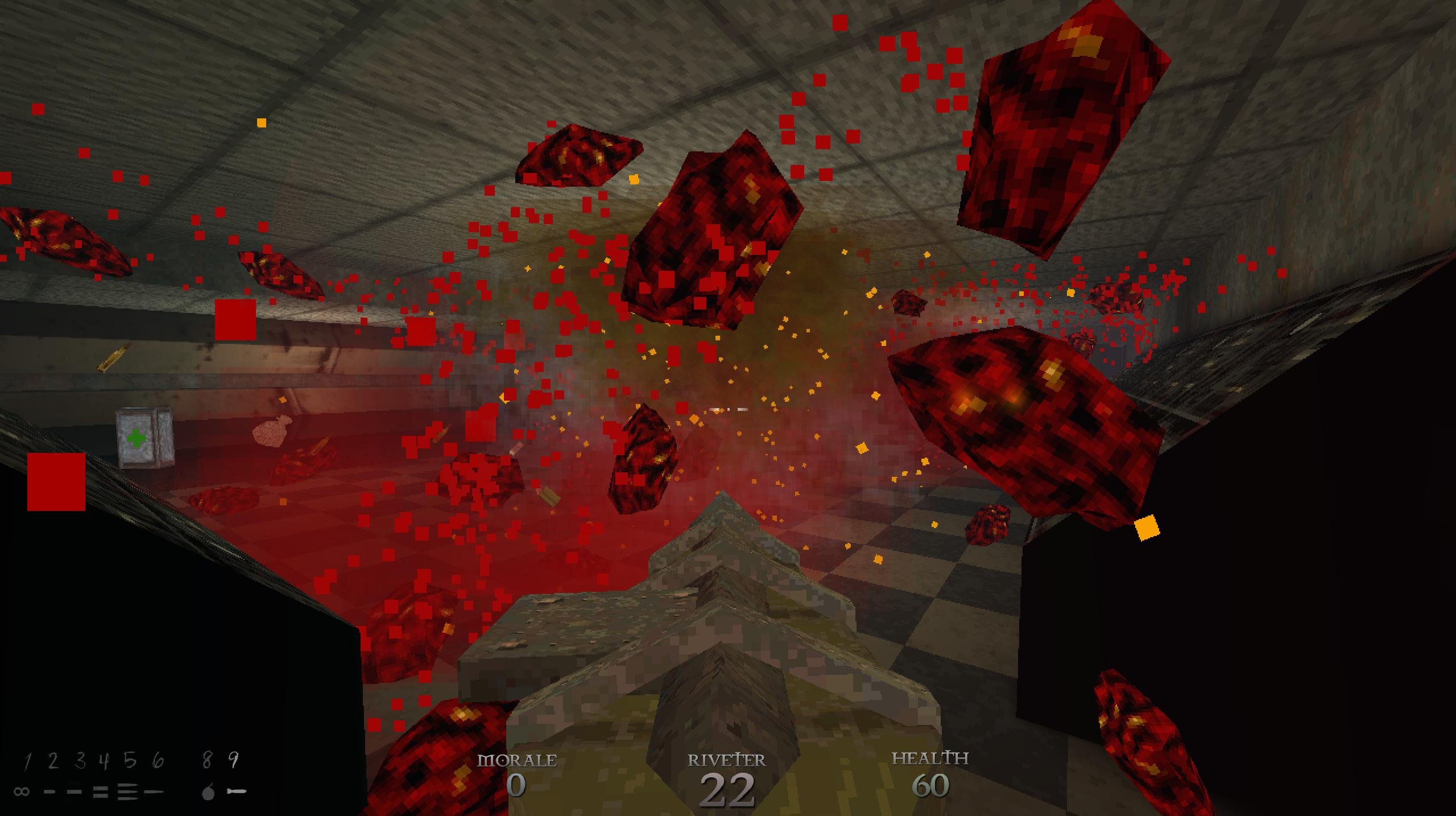 I feel like I should have some criticisms, but I'm struggling. I played it on the default difficulty, as the game encouraged this for a first time through, and it was perhaps a little too easy in places. Upping the difficulty doesn't do anything other than make the enemies more powerful, which is perhaps disappointing? Nah. Um... the finale could have been more imaginative? But I had brilliant fun blasting through it anyway. Sorry, I'm stuck.

I've adored this. It's so damned smart, the level layouts as good as anything from the '90s heyday of the genre (perhaps with the exception of Dark Forces? I'm not sure if I'm willing to let that game's meticulous architecture slip from the top spot), the secrets rewarding to hunt down. The more you progress, the more elaborate its ambitions, and the more it starts to play with the nature of the limitations of the early version of the genre. Oh, and there are some lovely nods to other games. At least I hope they are, anyway, or someone from Looking Glass should be perturbed by this corridor: 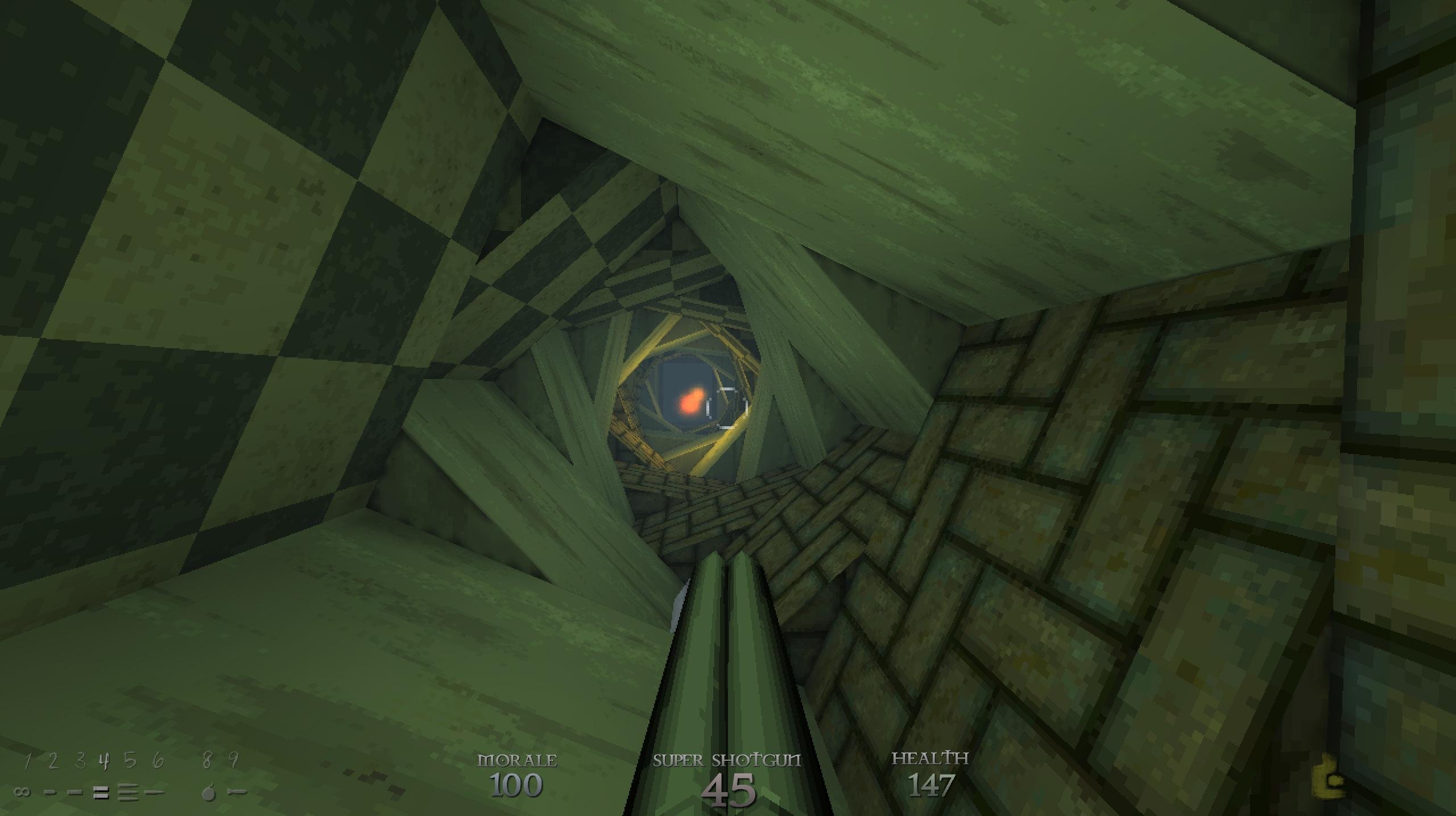 All this for £13! Honestly, this is purist FPS as good as it gets, just a constantly stunning game. Don't miss this.