Three of the first four Close Combat games are now back in legal circulation thanks to GOG.com and current licence holders, Slitherine. For years I've been telling myself that prolonged exposure to Combat Mission and Graviteam Tactics would make a long-term relationship with Atomic's top-down tussle series – a series I loved dearly in the late Nineties – difficult today. I now realise I was wrong. Twenty years on Close Combats 2 (aka Close Combat: A Bridge Too Far) and 3 still entertain as consummately as any of the tactics titles that followed them. 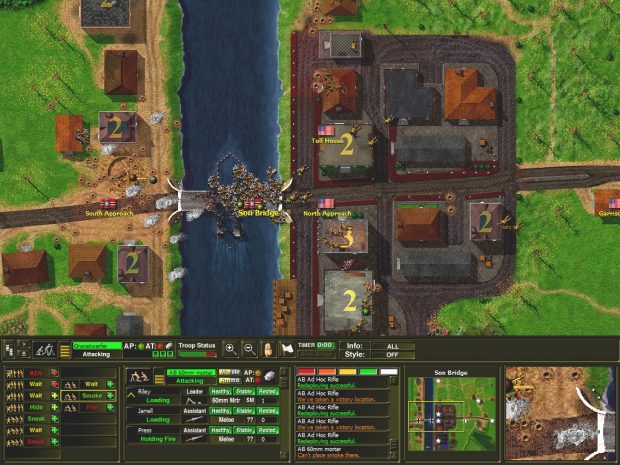 The Market Garden and Eastern Front CCs offer pace, approachability and control elegance that none of their weightier 3D successors can rival. Preoccupied with LoS and morale, and happy to kill tanks with single shells, they are rich, turnless wargames designed to be played, not studied or respectfully admired from afar. Deeper realism and smarter CPU opponents are available elsewhere. Tighter, more exciting WW2 scraps are not.

Many of my mental CC2/3 snaps featured AI infantry slithering when they should have been sprinting - AFVs pirouetting when popping smoke or presenting frontal armour would have been much wiser. Tanks do dance from time to time and grunts do spend too much time on their stomachs, but I'd forgotten just how dangerous the games' artificial opponents could be when roused.

In the above image the computer-controlled Soviets are in the process of punishing me for woeful scouting and unimaginative inter-mission unit requisitioning. That green goliath between the houses appeared unexpectedly on my right flank and proceeded to mortally puncture two Panzers and a StuG, while I, caught between a rock and hard place, could do little but cross my fingers and kick myself. 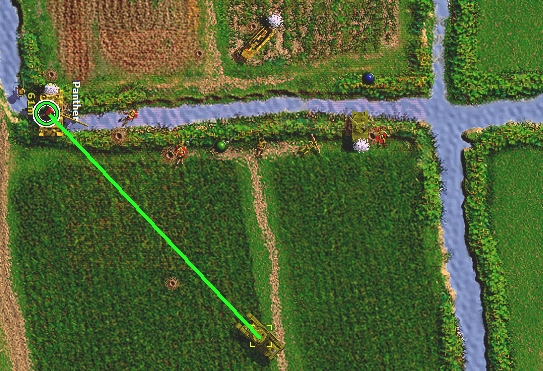 You do a lot of finger-crossing in a typical CC2/3 skirmish and the moments of helplessness are a major part of the appeal. Here's a grab from my latest CC2 operation. Again wrong-footed by the purposeful way the AI has employed its armour, I'm praying a feint with a Stuart can distract an advancing Panther for long enough to allow a Churchill a precious first shot. In this instance the gamble paid off. I was rewarded by two of the most memorable sound effects in digital wargaming – a rumbling thunderflash-in-a-dustbin thunderclap closely followed by a heartening “Scratch one!”. 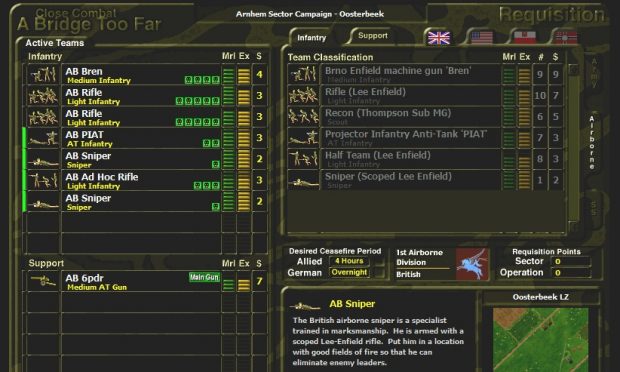 CC2's narrow focus, early asymmetry (Allied forces are armourless at the start of most ops) and unique bridge-emphasising tug-of-war campaign structure, give it flavour that none of the subsequent releases could match. Intimate and infantry-dominated, its GOG form has a few regrettable rough edges but, at 6$, is incredibly easy to recommend. 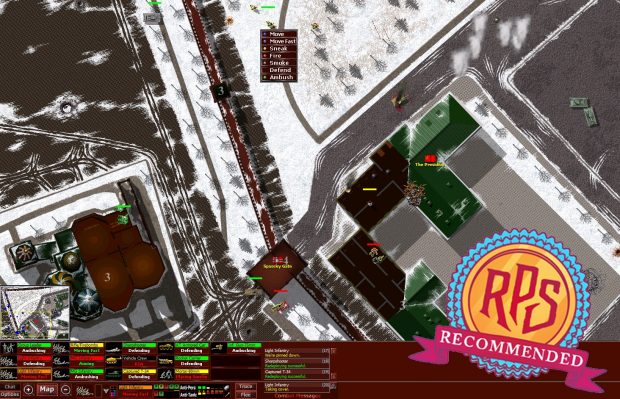 Pinning an RPS rosette on the identically priced CC3 also seems like a very natural action. An Elefantine follow-up that enlarged maps and mellowed terrain colours, while introducing boons like adjustable unit rotation, it is unquestionably the prettier of the two, but arguably tries to do too much by covering the entire Eastern Front from 41 to 45.

CC4, the youngest of the rereleased trio? I remember CC's Ardennes outing as much for its overcrowded maps and ill-judged AFV emphasis as its dramatic aircraft or move away from linear campaigning. If the bout of Bastogne battering I have planned for this weekend causes me to rethink this assessment, I'll put the record straight next Friday. 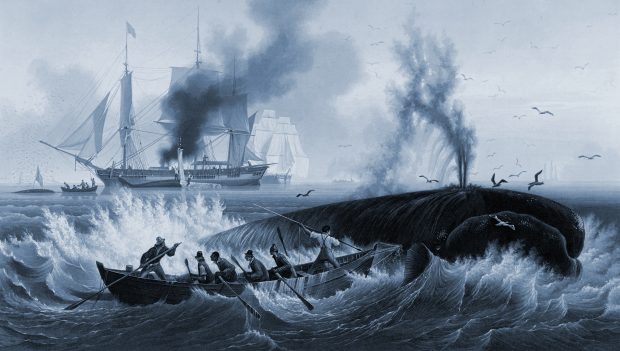 Welcome back to Flare Path's ongoing whale tale, a calamity-rich collaboration between Nantucket (plot and inspiration), myself (incidental detail and rash decisions), and a plucky band of Flare Path readers (brawn and pathos). When we parted company last Friday, the Flora was about to set off on her most ambitious cetacean hunt yet. Desperate to get their hands on Kahekili's Spear, a fabled relic last seen jutting from the side of a formidable Right Whale known as ‘O Inquieto Du’, Captain Stone and his crew (Shiloh, Stugle, Mr Gity, Rorschach, Arioch_RN, Faldrath, Velko, Burn3r, Canadave, and Rituro) are making for Tristan da Cunha, The Restless One's LKA.

“Shiloh, once we've worked clear of the coast, shake out the top-gallants and steer a course for... ”

I consulted my pocket compass and scanned the horizon.

“...that cloud over there that looks like the Duke of Wellington riding a Galapagos tortoise” 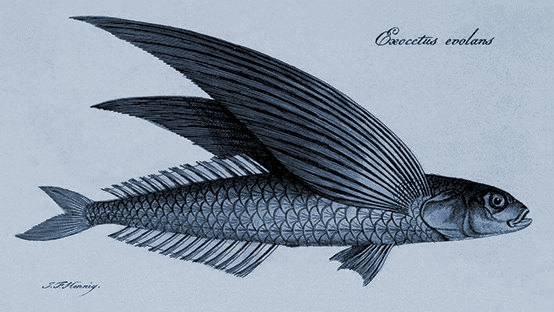 I was pondering that worrisome possibility when a flying fish struck me full in the face, snapping the stem of my favourite clay. At sea there are few more ominous omens. Nearby crewmen gasped and crossed themselves. I stomped off to my cabin, skewering the portentous piscine with an angry stab of my narwhal tusk peg-leg as I went.

For twenty-five days Flora cleaved and clambered, heeled and shook. For twenty-five days the ill luck presaged by the winged pipe breaker found small but ingenious ways to fray tempers and deepen gloom. A careless hatchet swing shortened Canadave's thumb. A stable of Mr Gity's most athletic weevils was crushed to death by a squall-shoved Bible. Arioch_RN's insatiable orchid consumed Rorschach's bawdy parrot. Burn3r dropped our best sextant over the rail. Shiloh and Stugle came to blows over a misspelt tattoo... Anything that could go wrong did go wrong on that accursed voyage. By the time we sighted Tristan, even I, a stone-cold sceptic, suspected we were on a devil's errand. 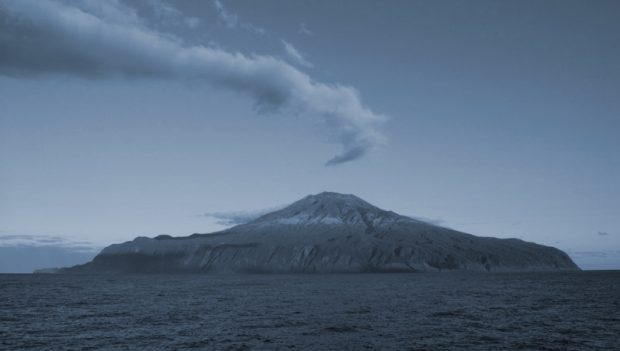 On the morning of August 31st we woke to find that the volcano to the south had calved. Screened by scudding curtains of rain as thick as baleen, it was twenty minutes before telescope scrutiny revealed the infant mountain's true identity.

“What a porcupine! I count eleven, no, twelve, harpoon stubs.”

“He's on a converging tack. Perhaps he means to stove us.”

“Suits me” said Arioch_RN, grabbing a blubber javelin from the nearest gig.

But the Restless One had other plans. After 'feeling' Flora's hull with a fusillade of clicks and pops, he veered off and began circling our craft the way a vulture circles an ailing camel. I ordered the boats launched, tumbling into the first, Quicksilver, alongside Faldrath and Rituro. Mr Gity, Shiloh, and Canadave manned broad-beamed Buttercup, Rorschach, Velko, and Stugle, the exceptionally stout Good Things Come To Those Who Wait.

Intimidating at deck height, O Inquieto Du was a coward maker without compare at sea level. As we closed on that breakwater of barnacled blubber, that embedded arsenal of ironmongery, those barn-door flukes, I envied my rowers their backwards gaze and thanked God I'd flushed my bilges out after breakfast.

“What do you think... 75 hitpoints?” whispered my awestruck boatswain.

“Nearer 85” I replied, gesturing towards the giant '83' stamped on the beast's rain-lashed flank.

“What about the madmen that hunt them in open boats armed only with spears and ropes?” I probably would have quipped if I'd been the quipping kind and hadn't been rendered temporarily speechless by the sight of several tons of whale tail whipping in my direction.

Honours were shared fairly evenly in that opening exchange. My missile lodged and its line held. The injury the leviathan inflicted in return removed at a stroke over a third of my vitality.

There was nothing equitable about the round that followed. Somehow Mr Gity, Rorschach, and myself all failed to draw blood. Faldrath used the unplanned armistice to bandage his captain. The Restless One used it to knock Good Things Come To Those Who Wait into the middle of next week. While I was busy being bandaged by one of Flora's medicos, our other healer was busy dying. Had the beast persisted, Rorschach and Stugle would almost certainly have suffered the same fate as Velko. Because it shifted its ire to Quicksilver, they were spared and it was Rituro who couched the next thunderbolt. Shiloh attempted to pull our cabin boy to safety but the poor lad was wrenched from his grip by an avalanche of grey flesh.

Two dead in as many minutes and O Inquieto Du barely scratched! I searched my skull for an inspirational phrase – something to quell the growing panic – and found only curses and blasphemies. For the remainder of the duel I ranted like a gin-soaked Tory yet used few words from Mr Johnson's dictionary.

The air turned blue and the sea turned red. Gulls wheeled and keened. Men jabbed and fended using shattered oars if need be. In round four Faldrath's luck barrel was up-ended by a single savage tail strike. Our surgeon died as he had lived, selflessly assisting his fellow man. It took three harpoon tips, well-aimed and hard-driven in round five, to turn the tide. The fountain that drenched our clothes and washed our wounds took on a crimson hue.

Once Mr Gity had opened a vein and fastened a second line, there was no way back for the Restless One. Rorschach finished him with a 15-point strike. All that witnessed that final pricking will never forget the extraordinary sound it elicited. As the monster expired it sang a note so pitiful and forlorn, the mobbing birds fell silent and none of us could dam our tears.

The text above is cut with bunkum. It took an hour of axe swinging to unsheath our prize and when the damned thing was finally free no-one played the warrior-king. There was no time for such tomfoolery and no appetite for it. We had blubber to boil and friends to commit to the deep. 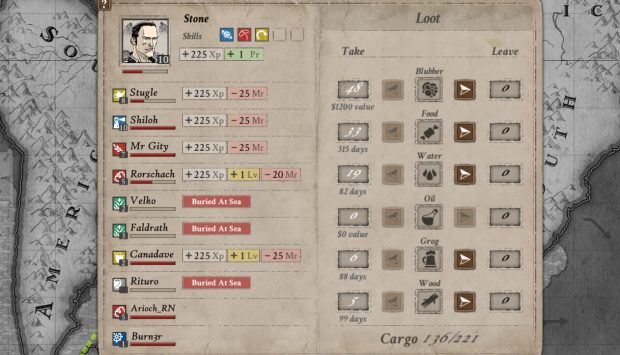