My biggest ludological disappointment of 2019? Close Combat: The Bloody First, without question. Slitherine's 3D take on Atomic's gripping top-down wargame series should have been irresistible, but a host of bugs and questionable design decisions left many of the pages in its copybook looking like Rorschach tests. Curious to see what difference a year of fairly regular patches has made, I reinstalled last Friday. 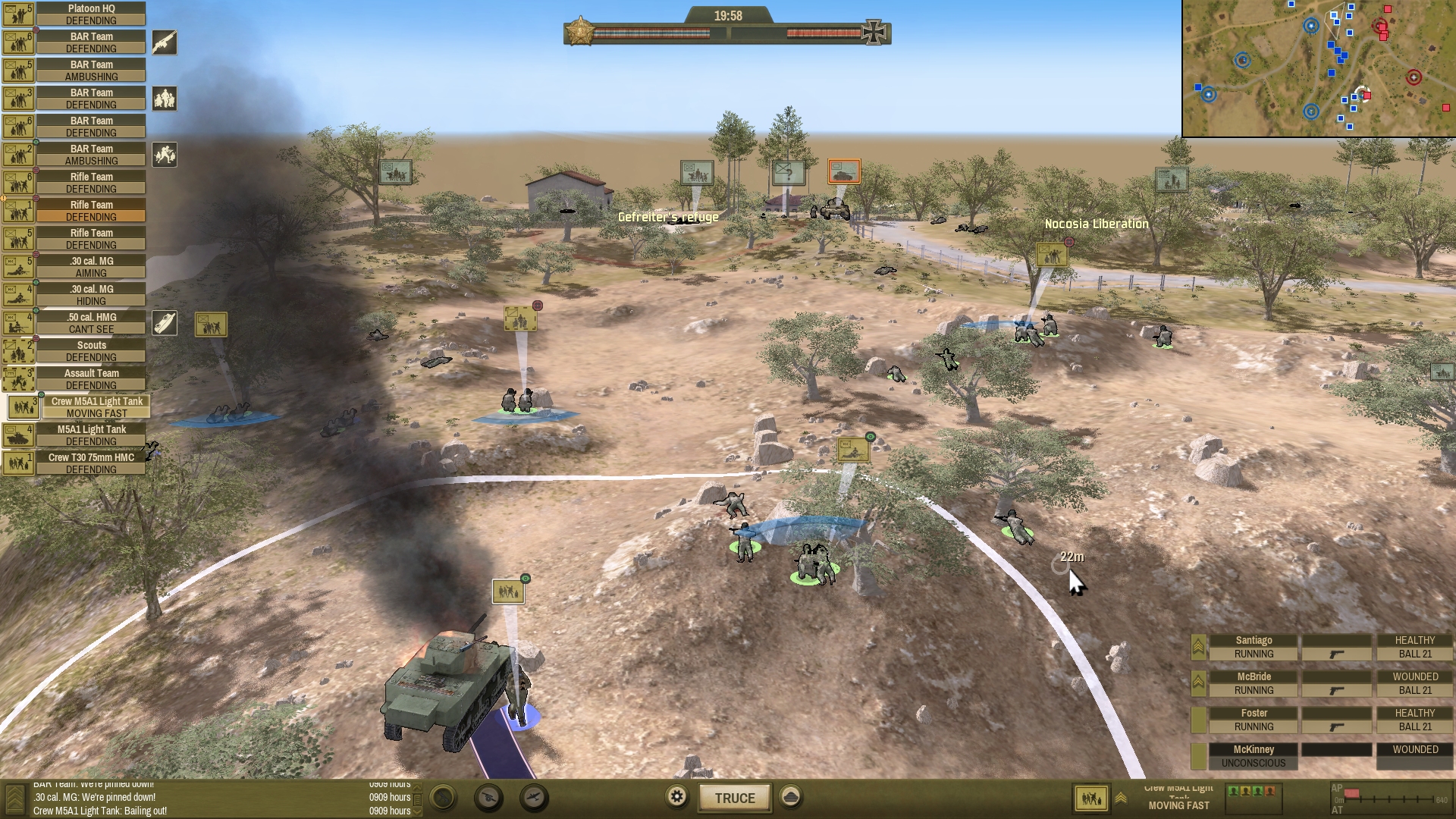 The good news. My week was crash-less and dotted with diverting engagements. I'm pleased I can no longer deploy tanks directly into houses. The frustrating stand-offs in which AFVs refused to fire at each other because of imaginary “steep angles” seem to be a thing of the past. I've not seen a tank gun barrel jutting from a turret at an unnatural angle. Mortars happily target halftracks now. Illumination rounds actually illuminate. I can't locate the enemy's armour by noting suspicious wiggles in a move order's path arrow. New icons and interface texts make engagements easier to read. Perpetual melees and spinning soldiery are gone. There's a map maker and mod support in addition to a scenario editor. I could go on.

But I won't because, despite all the improvements, CCTBF remains a wargame that yanks my chain, gets my goat, and pulls my plonker at least once a battle. 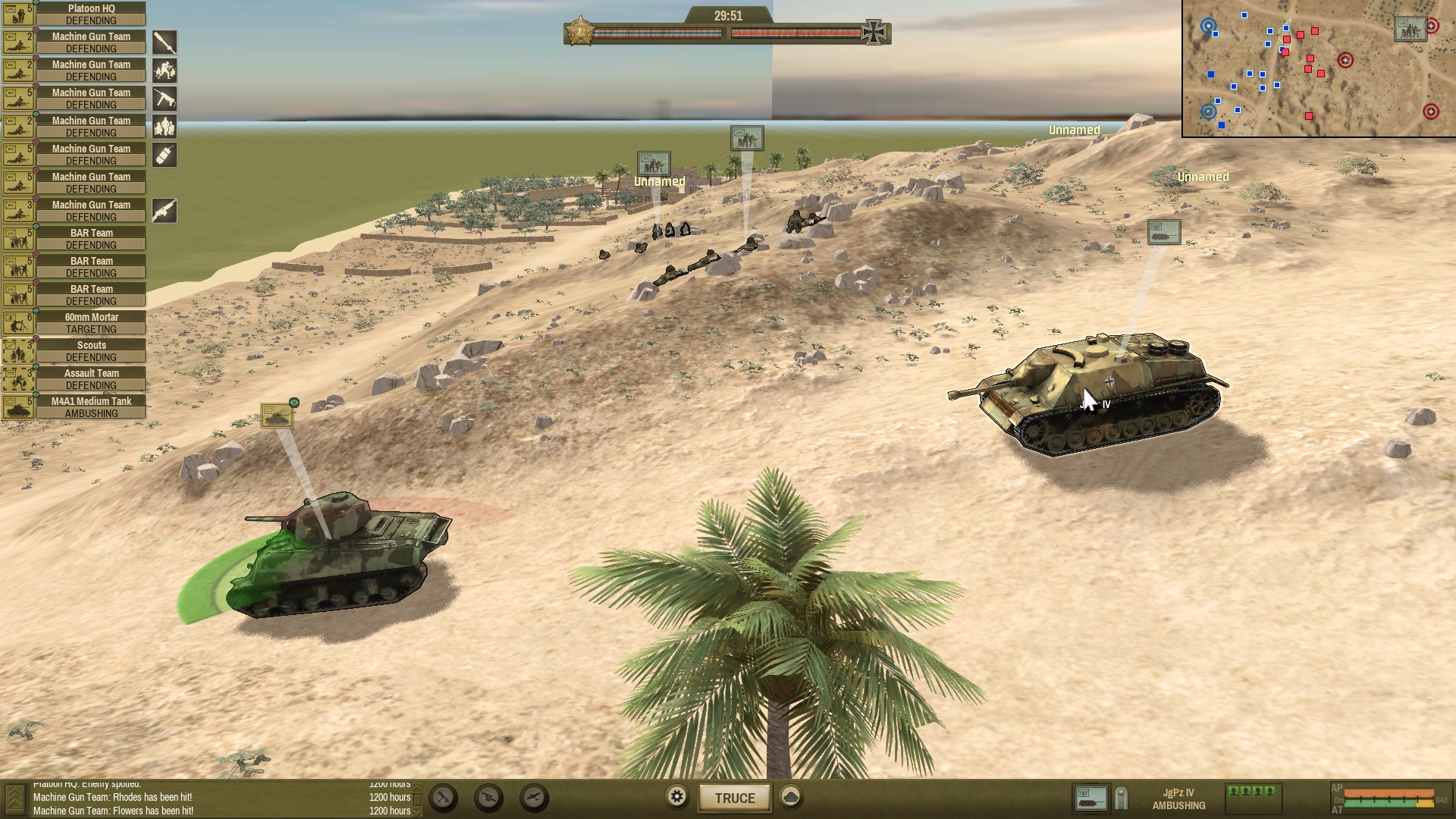 Take tank and AT gun inaccuracy for example. An issue that has been generating forum threads since the beta tests, is - despite movement in the right direction - still provoking them today. The difference now is, thanks to the map editor, demonstrating daffiness is much easier. 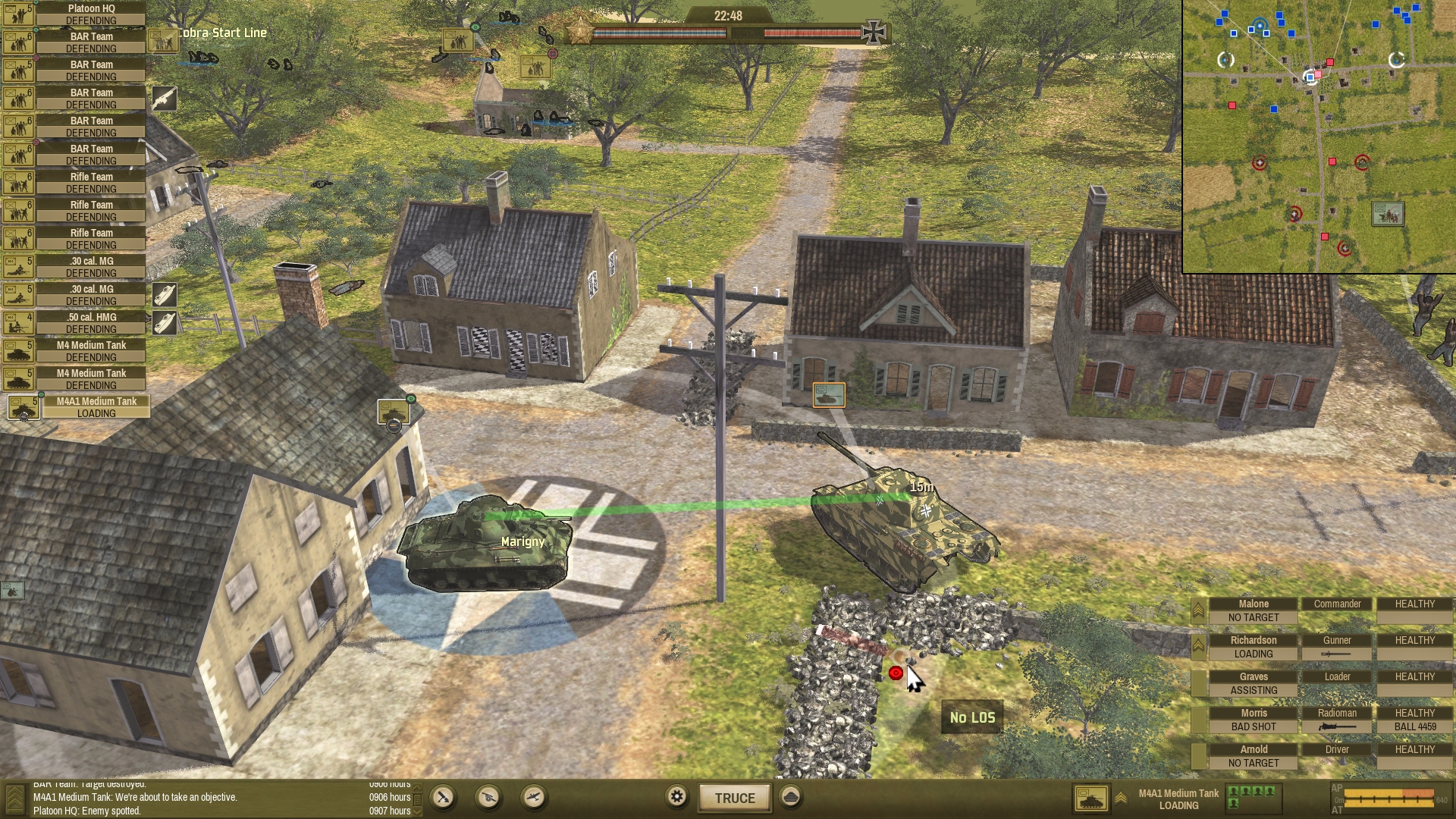 Because losing a single tank in CC can very easily scupper your chances of winning a battle, it's vitally important that duels between angry houses feel realistic... fair. If you've spent ten minutes working your Sherman into a perfect ambush position, the last thing you want to see is it miss a point-blank shot into a Panther's flank twice in a row and perish as a result. The unscientific way CCTBF handles its hidden “to hit” rolls guarantees 'freak' occurrences like the one pictured above (the M4 ultimately paid for its ludicrously poor marksmanship with its life) in almost every scrap. 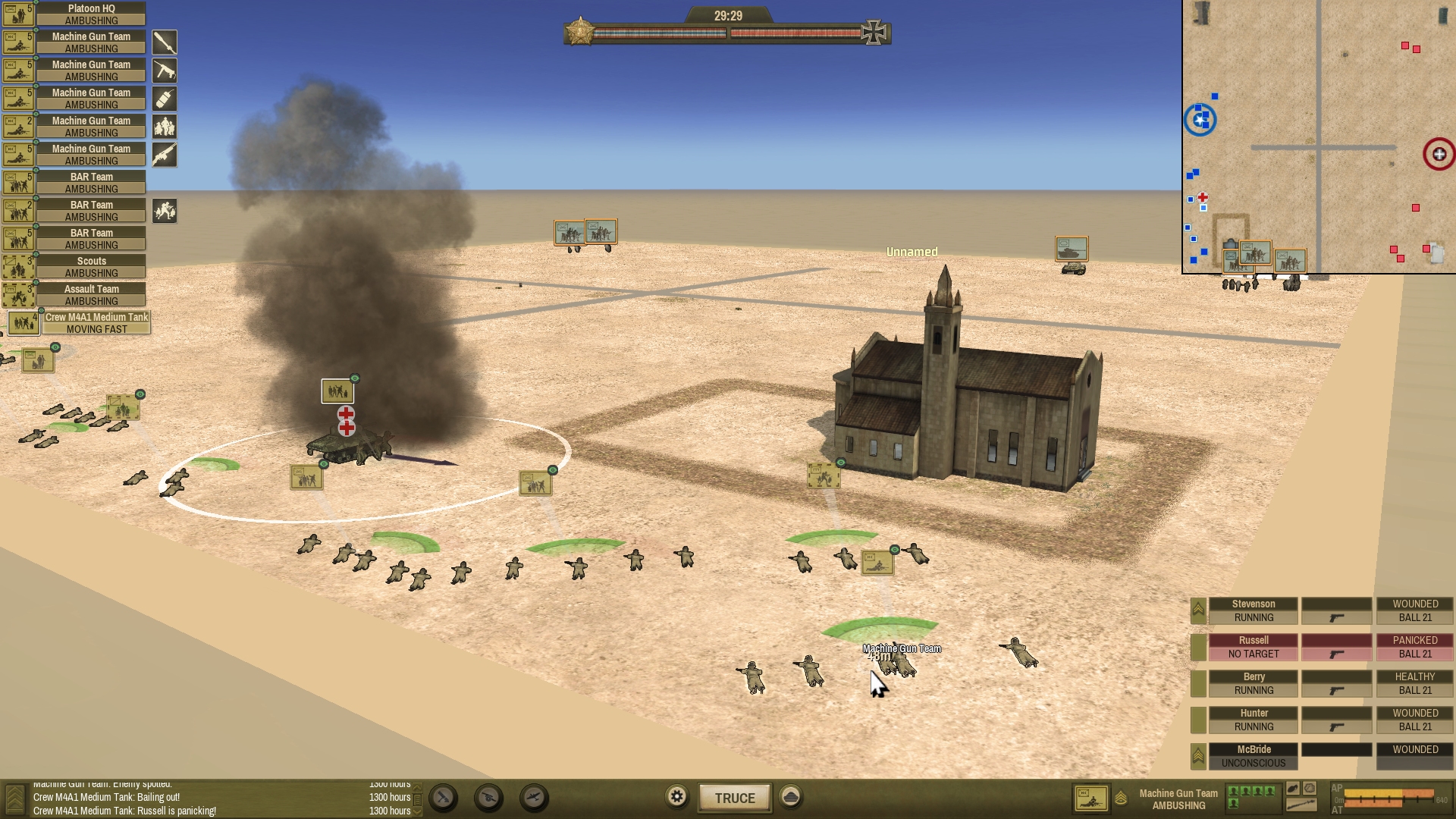 One of the first things I did after reinstalling was to create a perfectly flat, largely empty test map and place an AI Tiger on one side and a Sherman on the other. Approximately 220 metres from stationary prey that refused to return fire, the Tiger would in real life have hit its victim with its first shot almost without fail. In CCTBF the big cat took on average 2.7 shots to put AP on armour. More significantly the Panzer was more likely to need three or more shots than one (the most it required was five) to score a hit. When you add LoS complicaters like foliage and smoke to the equation outcomes stray even further from common sense.

*The test was run thirty times.

When I shortened the range to around 130 metres and swapped the Tiger for a Panther, the figures were scarcely more believable. The Panther needed on average 2.1 shots to hit a stationary Sherman that must have filled the gunner's scope entirely. Bizarrely when I ordered the M4 to move 'fast' across its assailant's front, the Panther was slightly more successful, requiring only 1.8 shots to hit.

All serious WW2 wargames need an element of chance in their combat maths. What they don't need is armour dramas on flat terrain in which first shots sometimes land closer to shell slingers than targets. 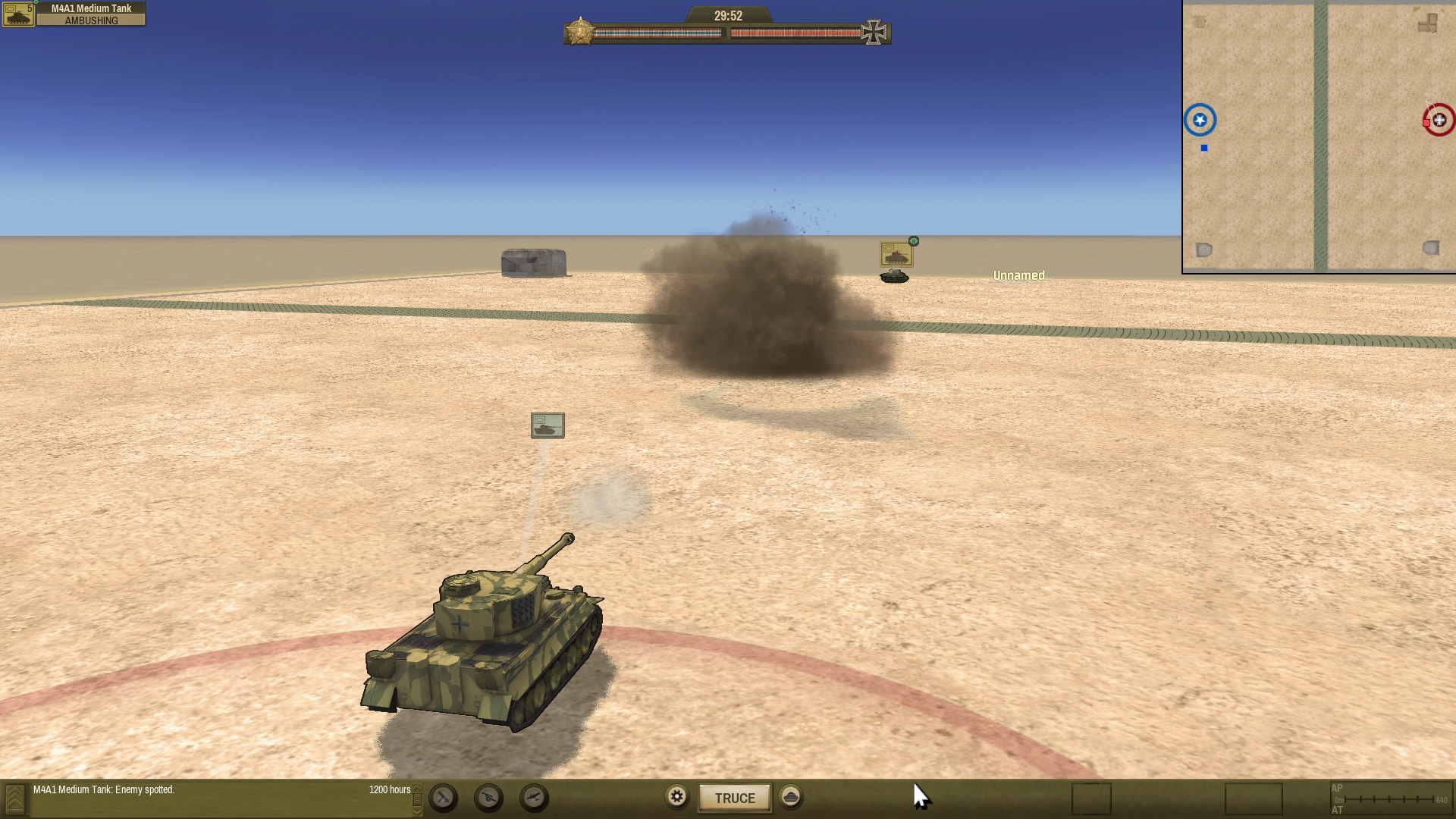 The gunnery tests also happened to reveal that another of my CCTBF bugbears - preposterously myopic tanks – has survived the patching process. When the Panther in the aforementioned test eventually pots its prey, the surviving Sherman crew bail, instantly revealing lines of previously unseen Schützen. Evidently the devs believe that shocked tankies heading away from Axis lines as fast as their legs will carry them are better at spotting stationary infantry than an undamaged, fully-crewed tank facing those lines. Baffling. 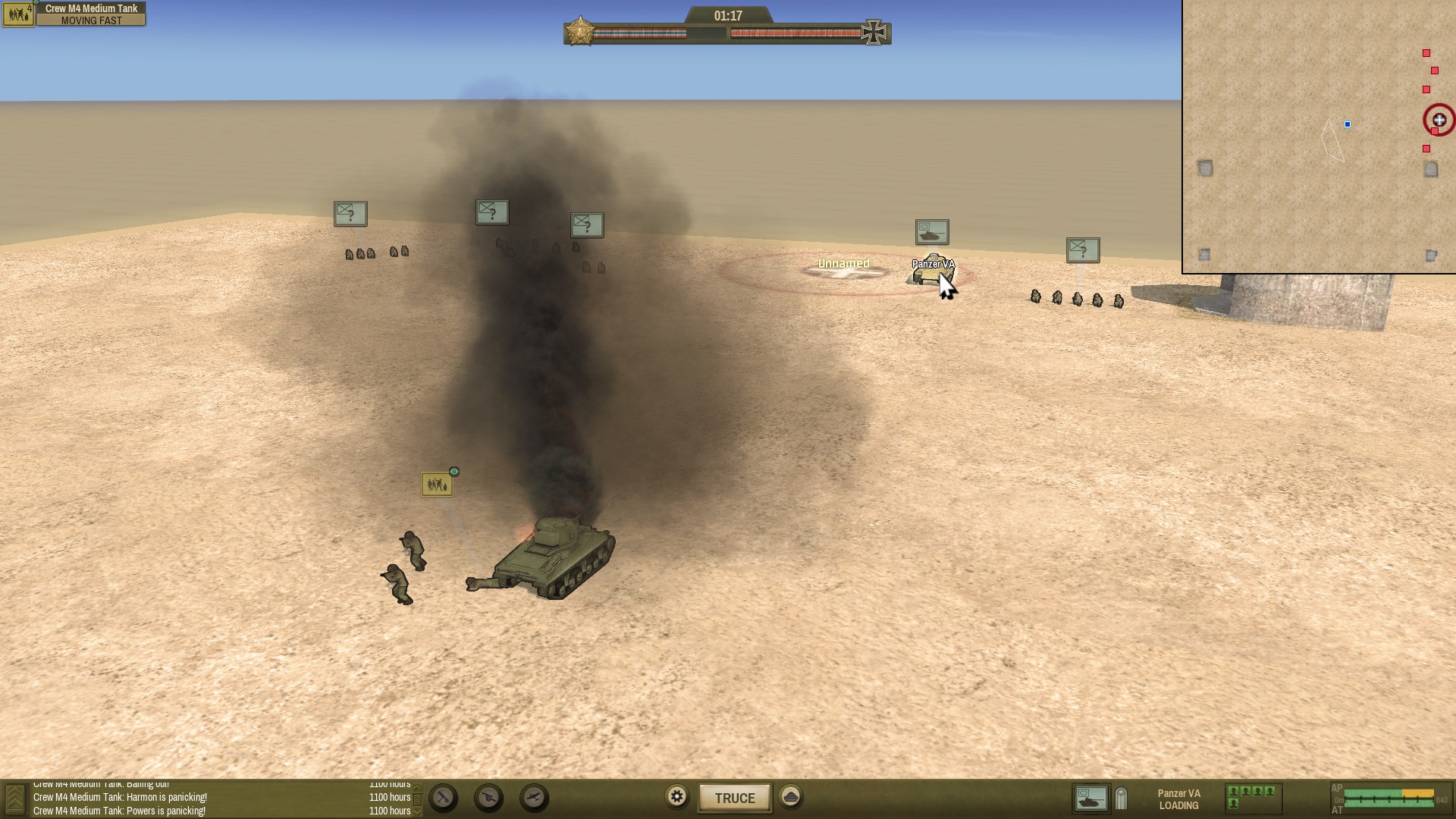 Here's another situation that shouldn't be possible in a serious WW2 skirmish wargame. The Stuart pictured below is contemplating a strip of level, vegetation-free land 220 metres away in which 135 German troops and two hefty 88mm flak guns are somehow hiding. I realise that you can work wonders with foliage and camo netting but this is concealment worthy of David Copperfield. 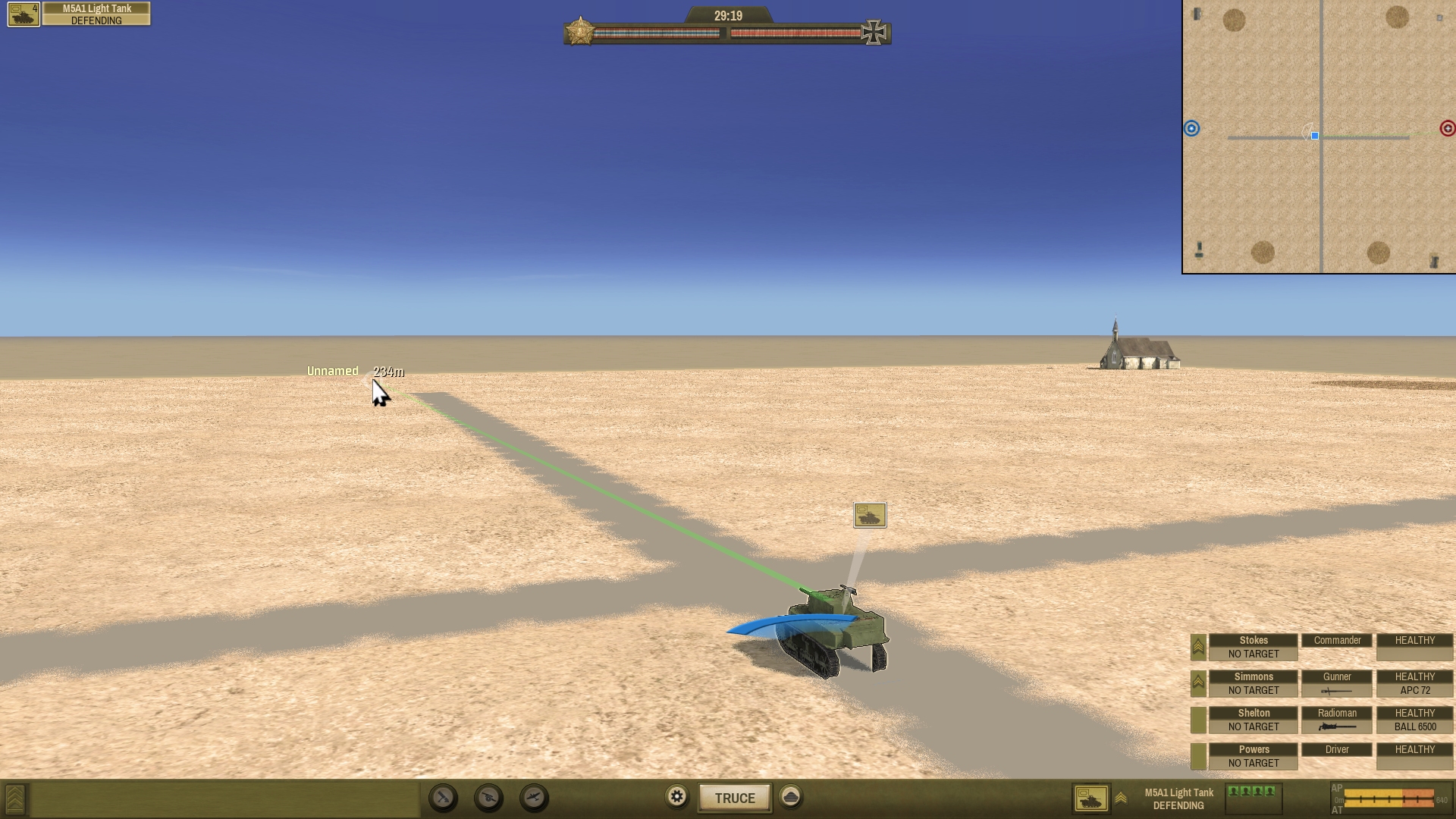 My review claim that there were 200 metre radius “detection bubbles” in CCTBF drew this response from a dev last October: “There may be cases where the formula can be improved but there is no hard coded 200m detection bubble. Vehicles in the open are spotted well beyond 200m.” Sadly it didn't lead to profound changes in the patently flawed way in which vehicles spot potential threats.

For no logical reason 200 metres remains a pretty important distance in version 1.1.8. Judging by the battles I've fought and tests I've conducted this past seven days, infantry walking across open ground towards a lone enemy tank will remain invisible to that tank until they cross an arbitrary threshold roughly 200 metres from the AFV (They can vanish again if they then decide to stop). The fact that these footsloggers would be visible at far greater range in real life, in Atomic's Close Combats, and in Battlefront's Combat Mission titles, seemingly butters no parsnips at Slitherine. 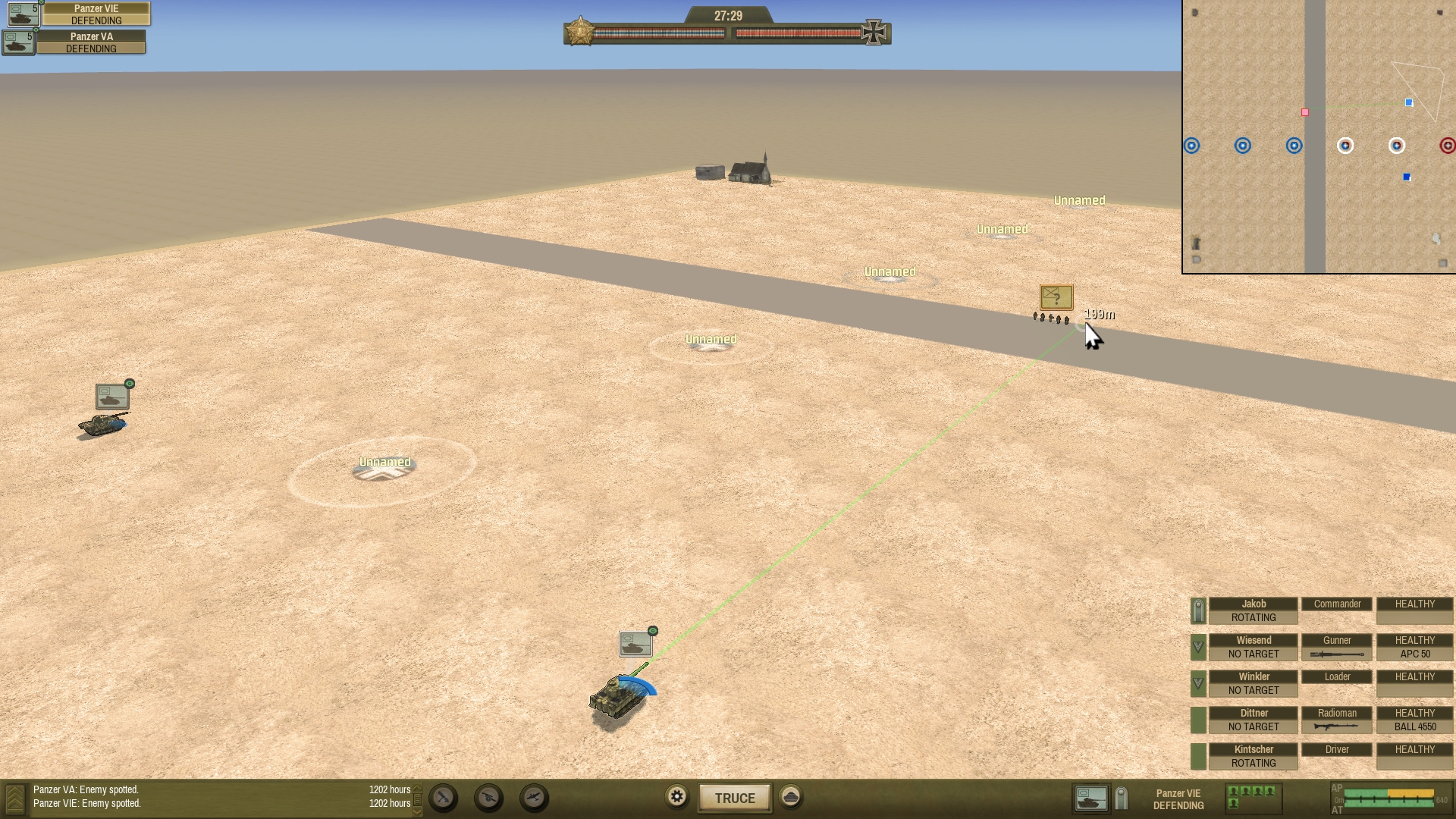 I suspect the devs are stubbornly sticking with short-sighted trundlers because they want to encourage infantry-armour cooperation (In-game grunts can see much further than tanks even when they are on their bellies, and the tank commanders are, presumably - CCTBF doesn't explicitly model unbuttoning - using field-glasses). Instead of modelling the actual factors that made lone WW2 tanks vulnerable to close assault CCTBF's designers rely on a completely unrealistic mechanic of their own.

Arguably the most disappointing aspect of the game's rehabilitation is the lack of AI progress. Foes perfectly capable of making you sweat when you're on the offensive, still struggle to mount decent attacks. Lines I penned in late September last year - “Far too often the Red Team bumbles, advancing haphazardly… tardily… foolishly” - might have been written yesterday. 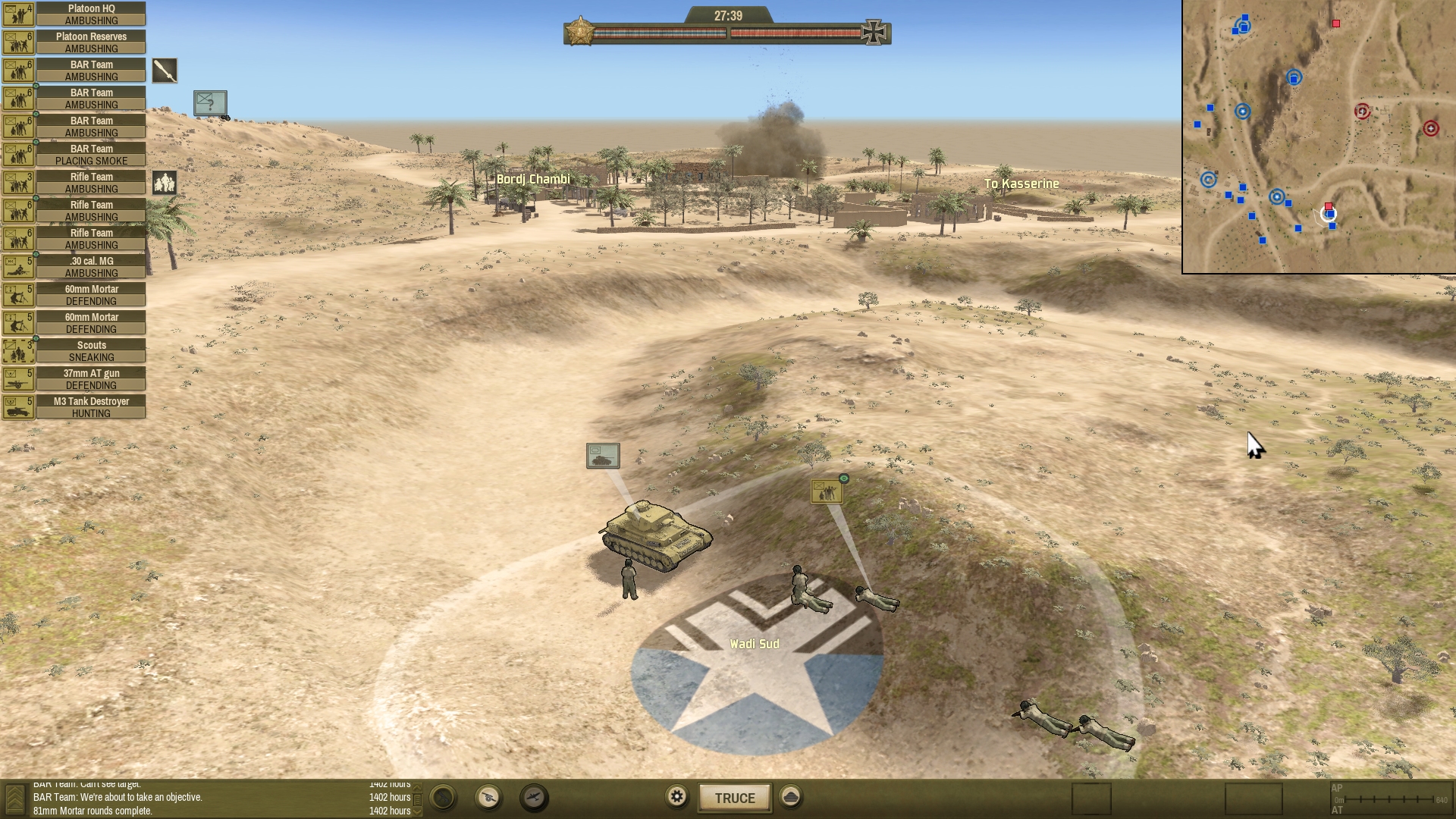 In order to better understand what my soppy silicon opponents are doing wrong I've taken to playing defensive battles with all units visible. I say 'playing' – what I actually do is leave all my units in their default deployment positions (some of which are far from sensible) and then spend the next thirty minutes sitting on my hands, observing the enemy's progress or lack of it. 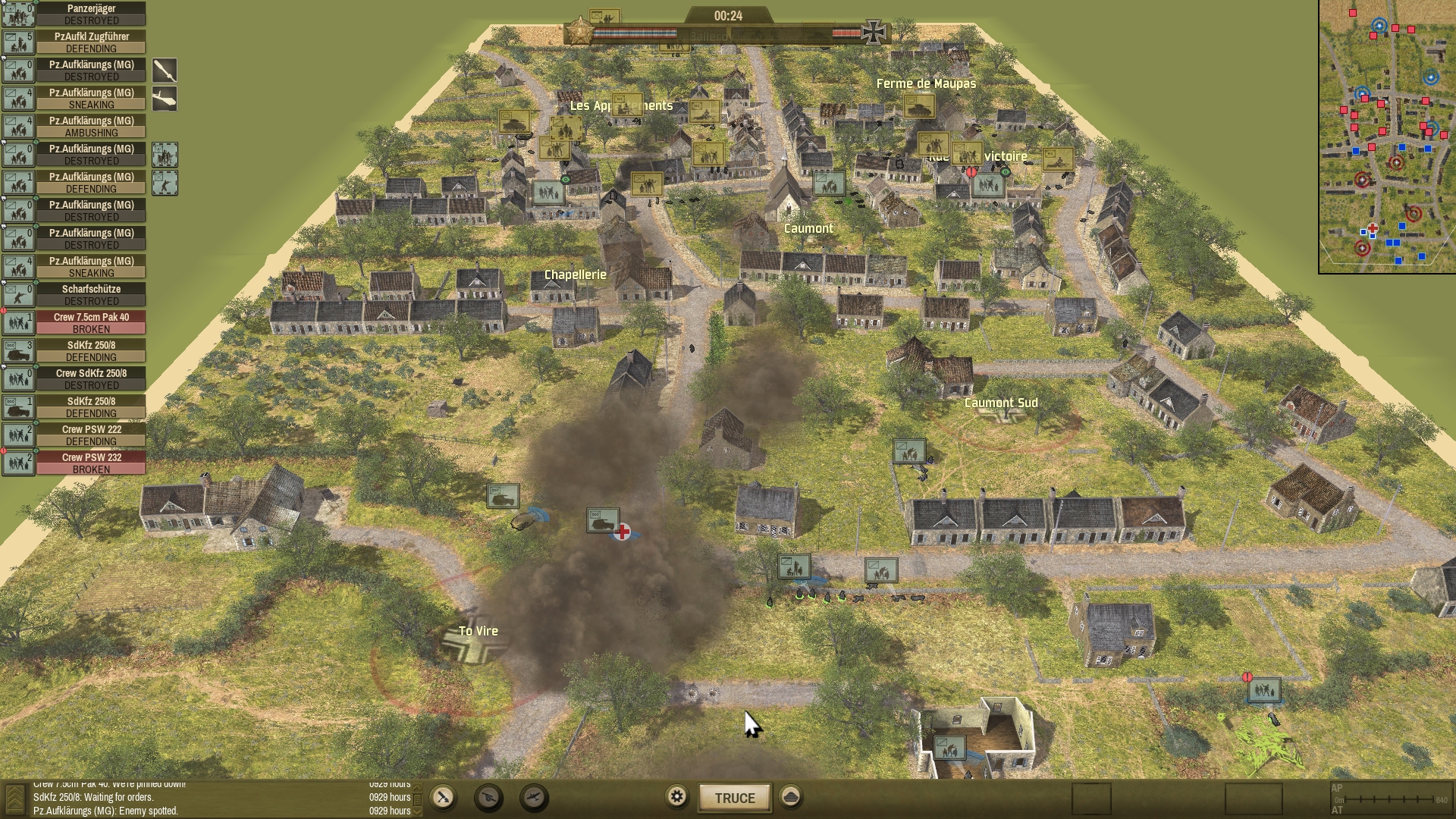 Having run numerous scenarios in this fashion what's striking is how half-heartedly the CPU attacks a completely unresponsive enemy and how easily its attacks run out of steam. Often armour and HMG teams sit idly by while vanguard infantry struggle to overcome modest threats. At times you see blobs of units painstakingly scouting irrelevant portions of maps instead of driving towards Victory Locations. Because of listlessness, over-caution, lack of focus, and poor use of key assets, the CPU rarely advances far during these half-hour experiments. The pics below show the situation at the start and end of a not untypical AI attack (If I had actually issued orders to the defenders I suspect Red's gains would have been even smaller). 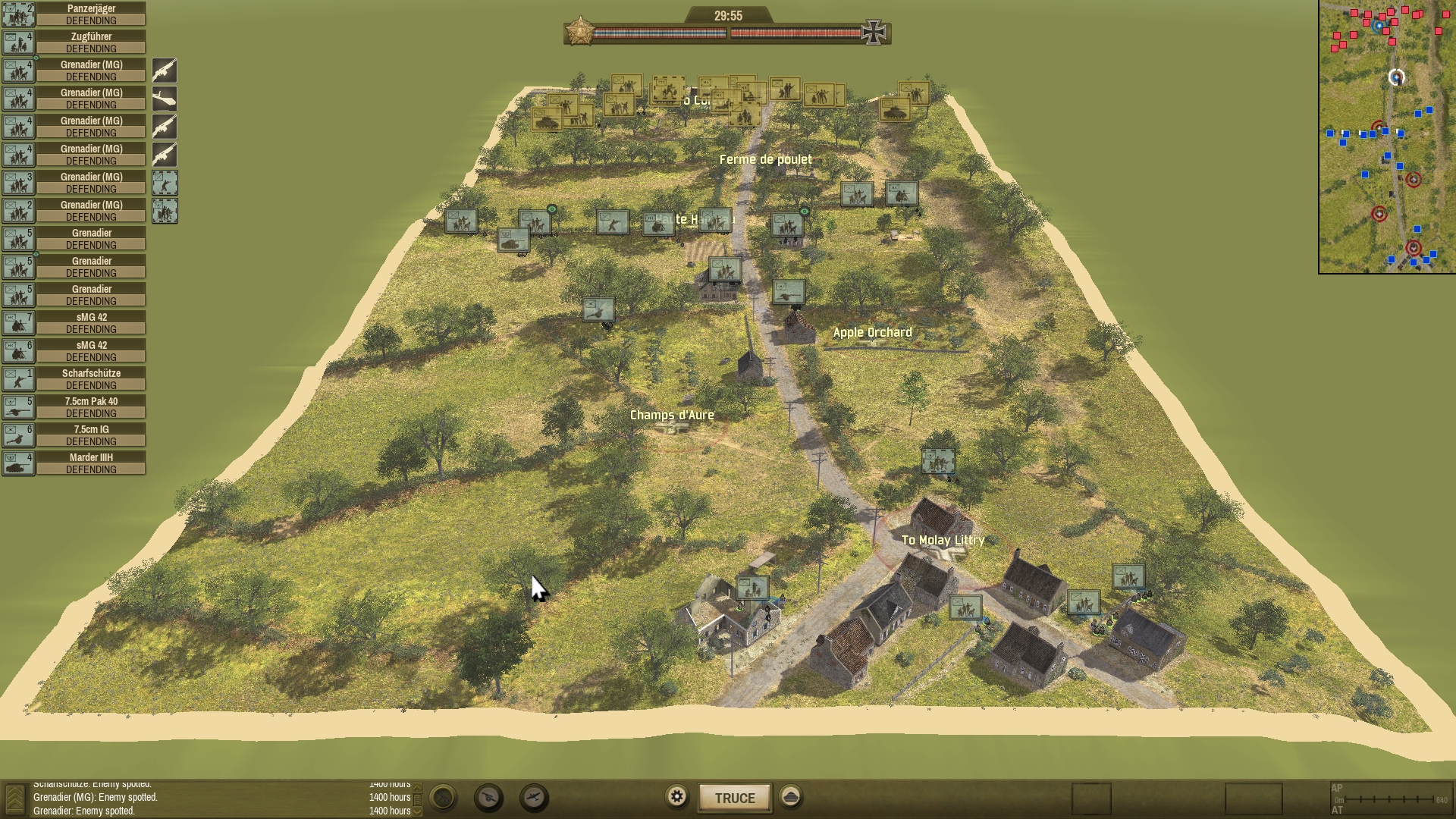 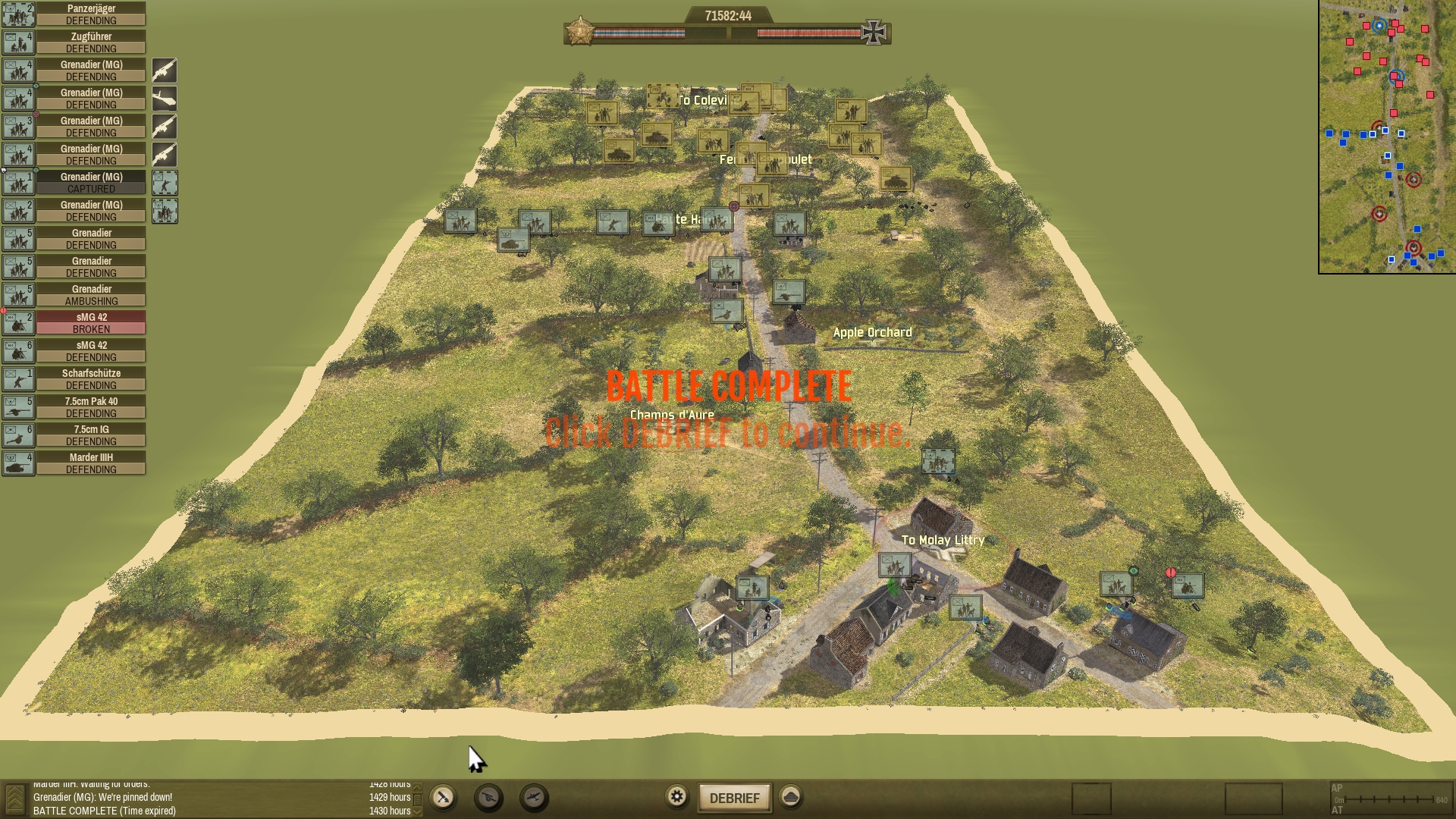 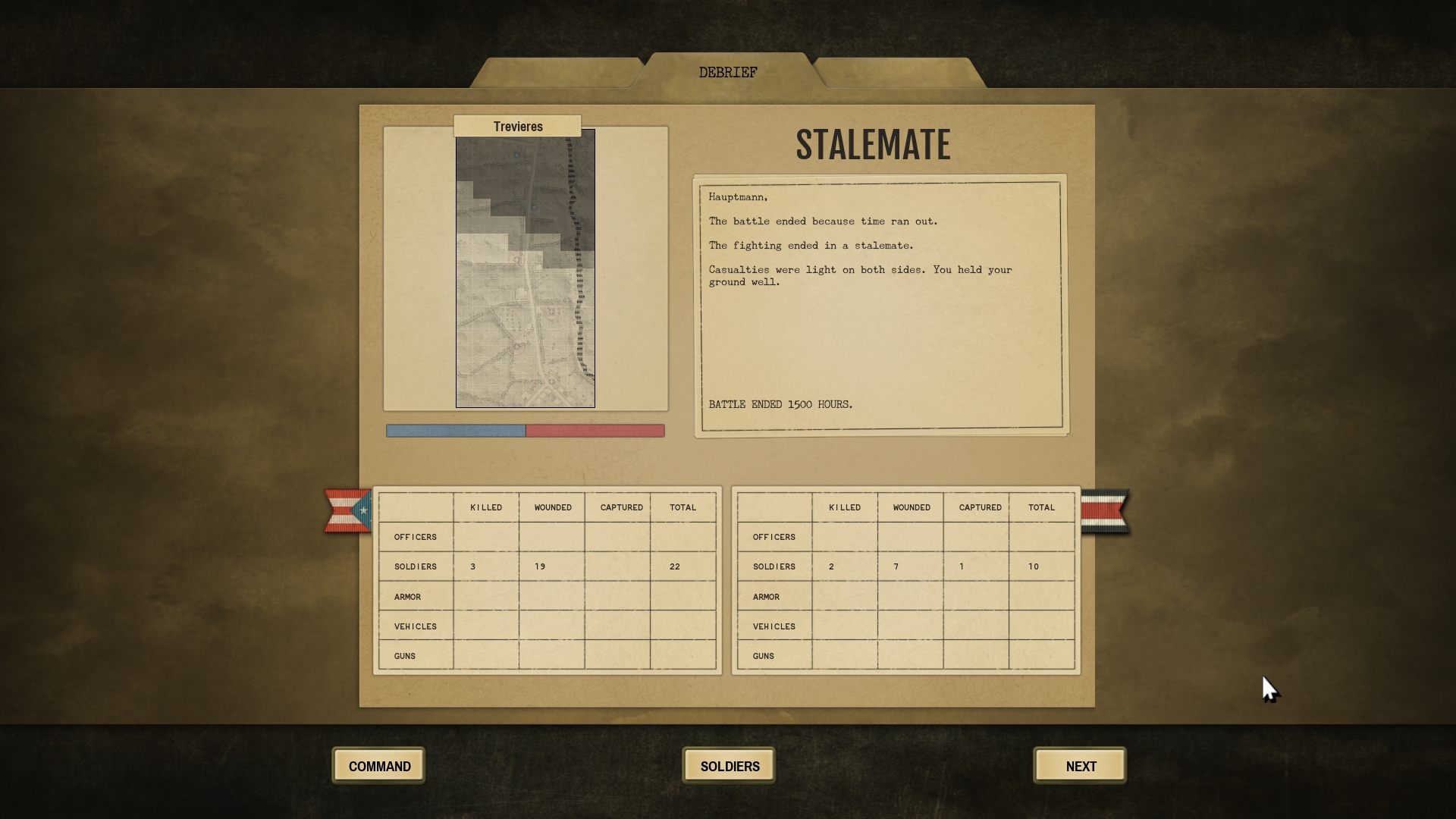 Like many diehard CC fans, “Smarter foes” was at the top of my “Next Gen CC” wishlist. I'm sure I'm not alone in feeling that CCTBF's poorly coordinated ditherers really don't qualify. 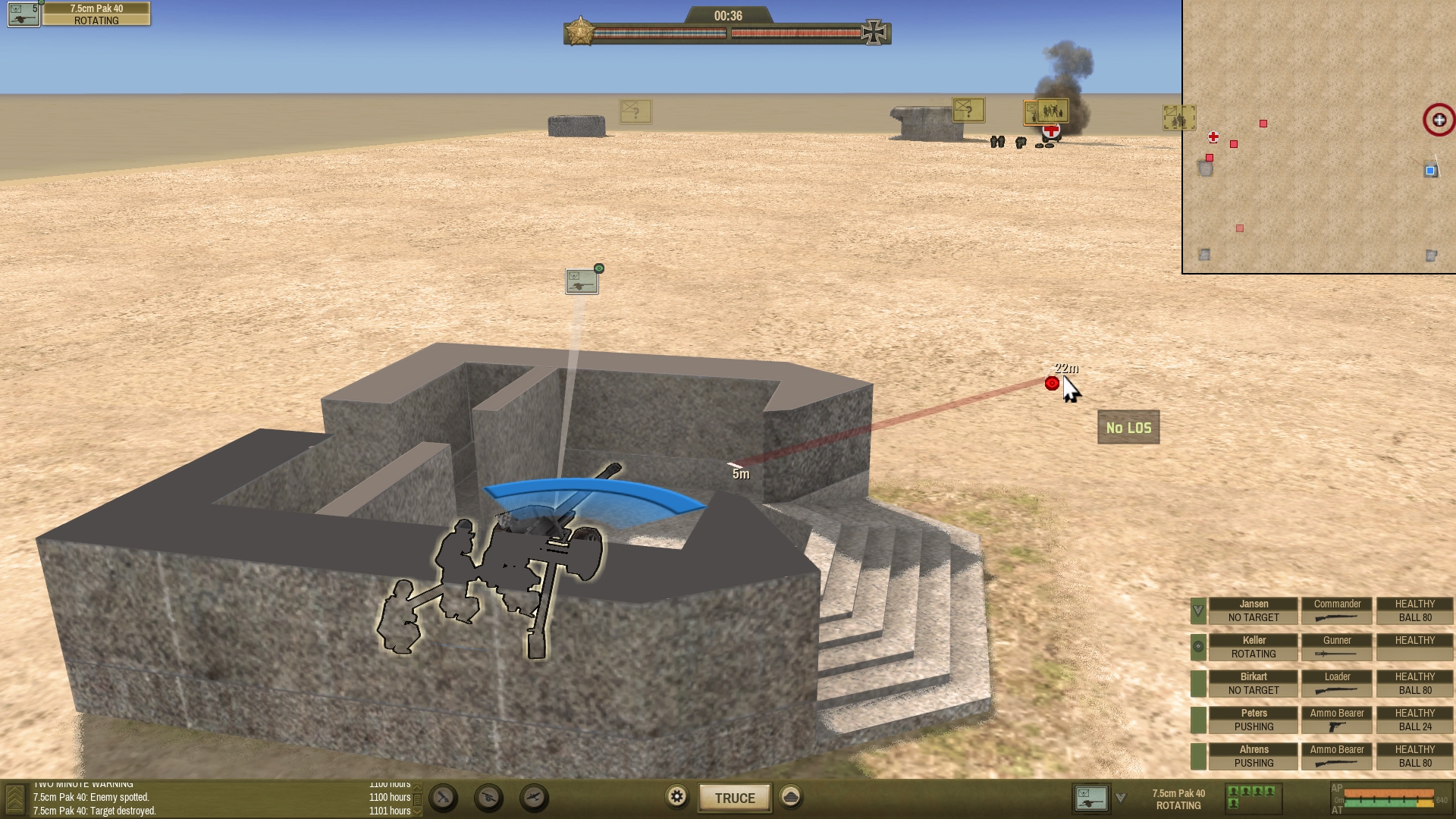 ...are minuscule beer. After all, if I choose to I can refrain from finessing AFVs fully... 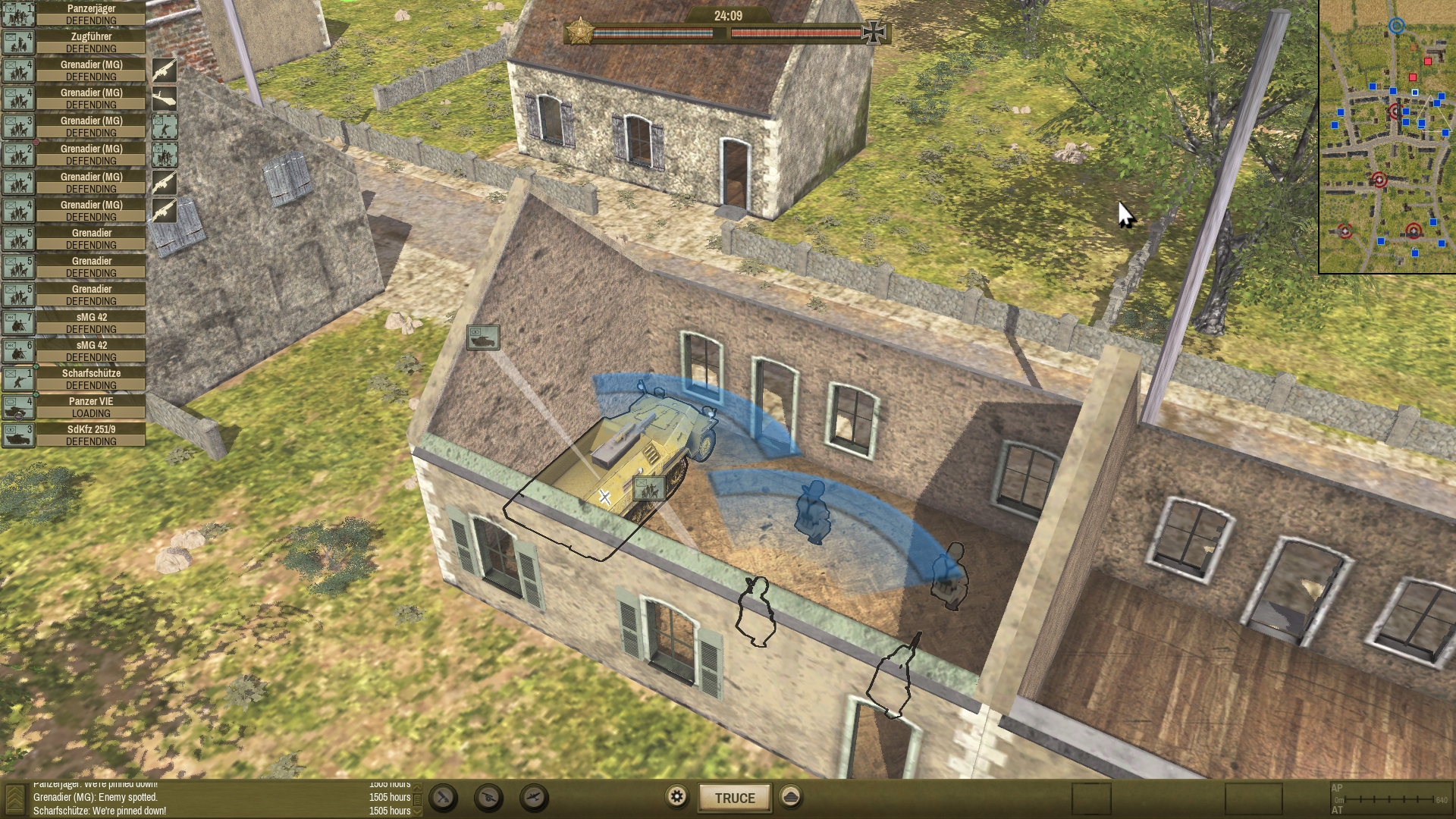 ...or partially into buildings by exploiting a loophole the dev's seem unable to completely close. 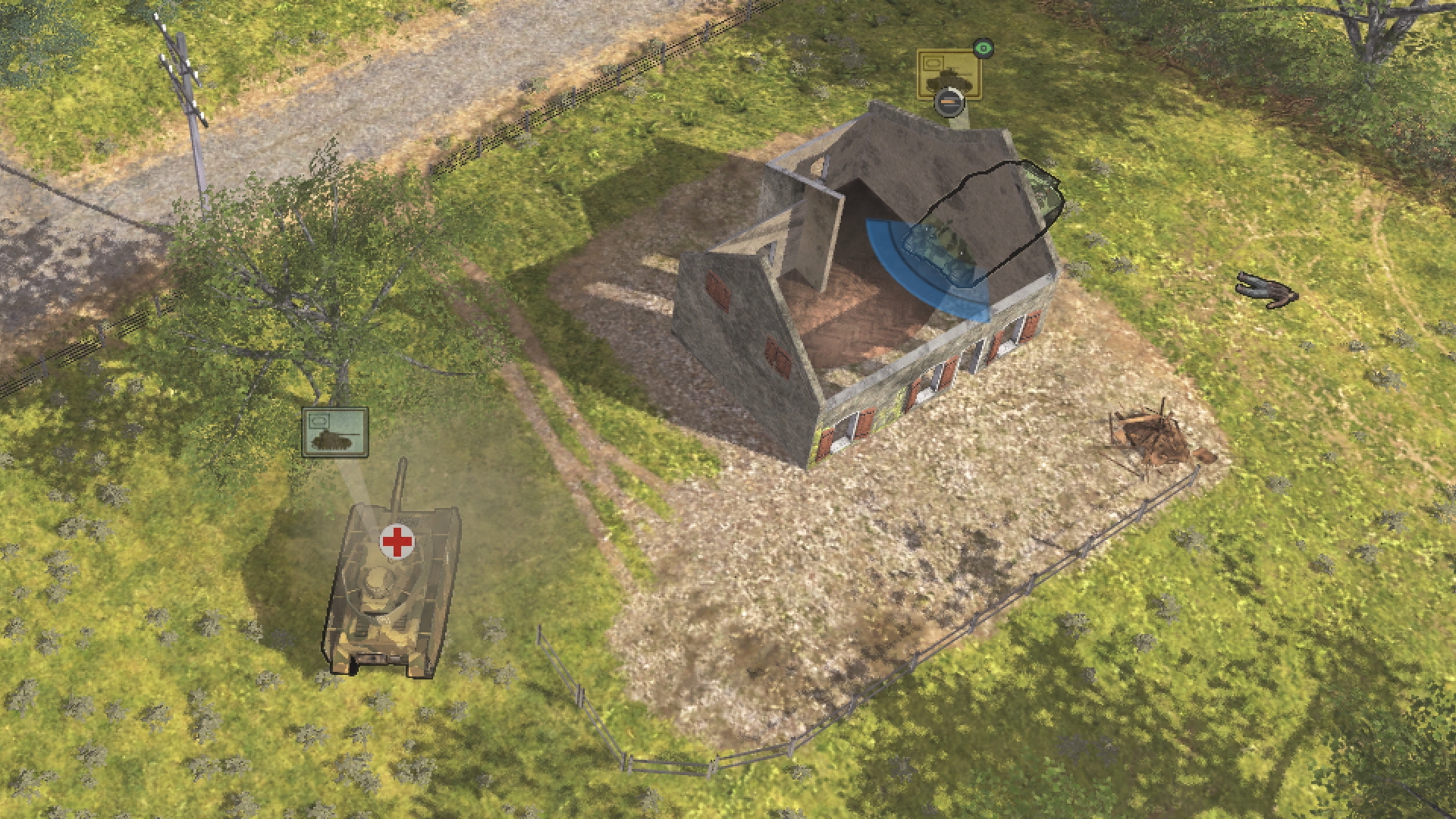 I don't have to defy the laws of physics by deploying AT guns in houses if I don't want to. 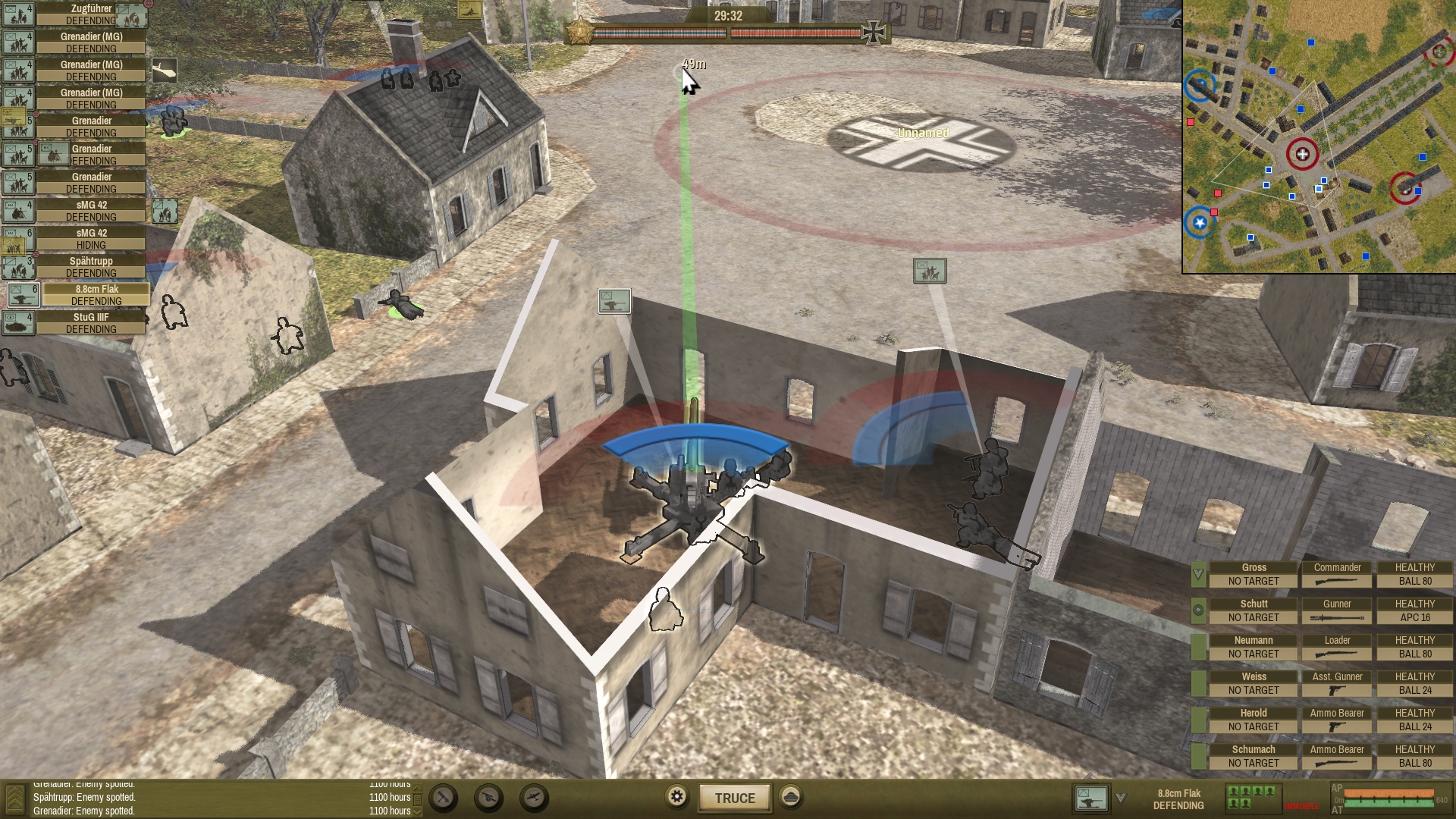 Or take advantage of the fact that enemy infantry have the road sense of unusually devil-may-care hedgehogs (Running down nearby grunts is generally a more efficient way of eliminating them than using firepower). 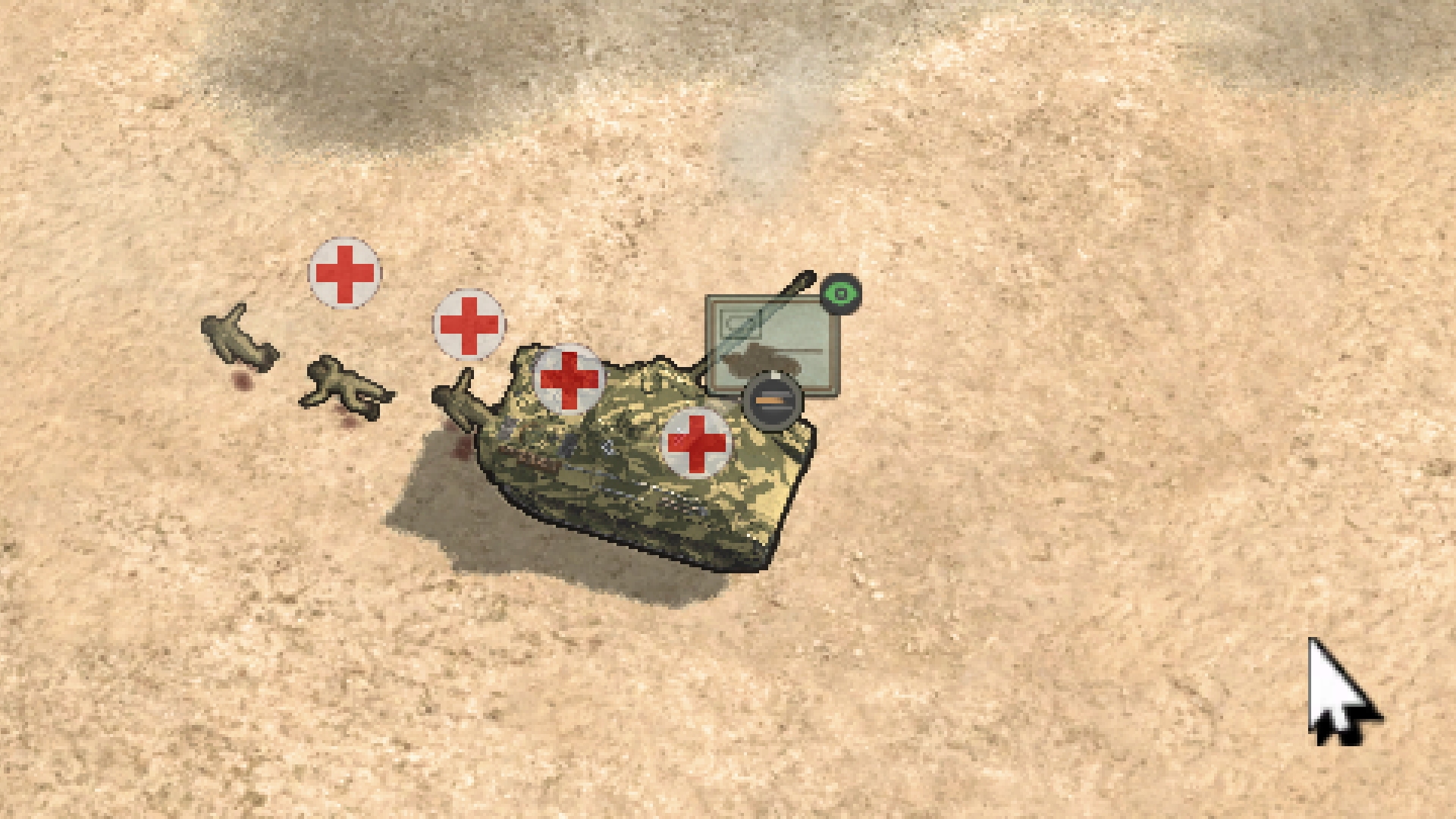 I'd happily live with ignorable imperfections like these if Close Combat: The Bloody First did the basics better. As a year of very limited progress in core areas suggests to me that Slitherine's effort will never be the torchbearer Close Combat deserves, my hopes are now with unofficial sequels. Somewhere out there there has to be a studio with sufficient will and skill to produce a believable, friendly, WW2 RTT packed with CC-style drama. Prove me right someone.