The Flare Path doesn't do 'amiable' or 'throwaway'. When I ask a developer  'How's it going?' I'm not being friendly. I'm fishing for cold, hard facts. I want to know if 2017 was an annus mirabilis or an anus hemorrhoidis...  why 'Experienced AI Programmer' has recently appeared in their site's Situations Vacant section... what 'Soon' next to 'Release Date' really means. In today's column, the people behind some of the work-in-progress wargames I'm most excited about, proffer spin-free progress reports. 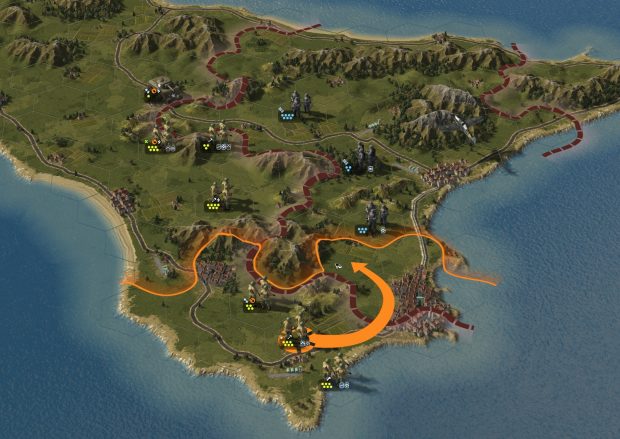 The follow-up to 2x2's shrapnel-sharp debut has been in been in the works for almost two years and on the drawing board for considerably longer. More sophisticated, flexible, and failure-tolerant than its forebear, UoC2 will blaze a trail from North Africa to Germany to begin with, then, fingers-crossed, demonstrate its engine elasticity by moving onto other WW2 fronts and theatres. Designer Tomislav Uzelac won't be drawn on a release date but seems pretty happy with progress over the past twelve months.

“I give an 8/10 to our development efforts in 2017: full marks for the 3D engine and the big moddable map, but running a little late on UI and gameplay. Personally, I’m most excited about the map editor, and what madness will come out of community experiments with unit and map scale.

Our current gameplay and UI work is easy in a way - simply adding some twists to the formula we know well from UoC. Fog of War complicates just about everything though. We’re taking it from making turns towards fully playable scenarios, so at the very least, us devs will be playing this game in 2018 :)

A major challenge coming up is the AI handling of Fog of War. UoC AI has never had to deal with hidden information, and it’s a concern whether our “pattern matching” concept will hold up. Offensive AI, on the other hand, has been less of a worry ever since Daniel Mellbin has shown us how to use AI hints to attack in his Zitadelle-Kutuzov community scenario.

Johan Nagel might have swapped the sandy wastes of Afghanistan for the sandy beaches of the Caribbean, and abandoned hexagons for the timebeing, but he still seems as fascinated by provisioning and popularity as ever. HMS is a board game-prototyped Hornblower-em-up in which your cutaway 18th Century warship's cask count and crew morale stat are inextricably linked. From Johan's latest email:

“The main tenet of the game remains the same, namely, getting promoted to Admiral of the Fleet before the other human/AI players. In order to do so the player will need to balance his career aspirations with the happiness of his crew, the cruel sea and enemy players hell-bent on making it as difficult as possible.

HMS is at pre-alpha stage, with full ship functionality and strategic map movement completed. A lot of work has gone into – and continues to go into - the UI/UX of the game, with the basic mechanics of ship management already coded.

The long process of balancing is in its early stages, with numerous tweaks being introduced to make the game more intuitive. The artwork has also been receiving a lot of attention, moving away from the traditional historical look and feel... 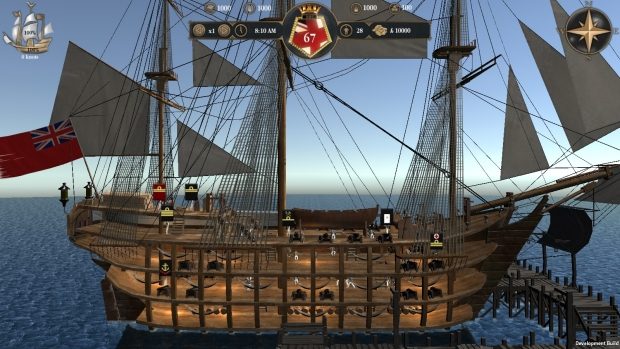 ...to something more contemporary, allowing a bigger audience appeal.

A brighter, lighter look has been introduced, actually inspired by a LEGO frigate custom build I stumbled upon in the research phase. The game will still pay respects to naval tradition, with all the bells and whistles that are such an integral part of 18th Century navy life, just in a more colorful and easy-on-the-eye style.

Gameplay has not really changed much but has been streamlined to reduce any unnecessary forms of micro-management, allowing the player (Captain) to command the ship rather than 'drive' it. To this end sailors/marines are selected based on both their experience and availability when orders are issued. The Captain will still continue to issue the strategic orders, usually in reaction to the environment and Admiralty orders, with the First Mate tending to the routine of the ship in unison with the Captain’s overall direction. 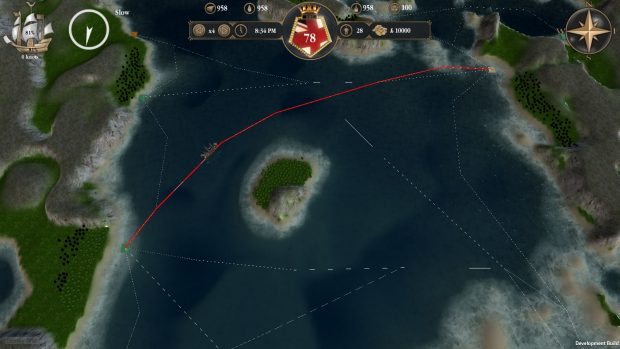 The multiplayer module is 90% complete and a lot of play testing will be done in this area, as it is a major focus of this title. We're aiming for a 1 hour game time, with the player spending 10/20/30 minutes on a Third/Second/First rate ship of the line. Player interaction is not limited to just chance encounters on the open sea. Other players and the AI will be able to command multiple vessels and construct forts that can impede the promotional progress of opponents.

The game is 'sailing smoothly' and should be on Steam and iPad Q2 2018, with the only major challenge ahead being the AI algorithms, both the construction and the balancing thereof. The full workflow has been mapped, but the devil is in the execution. This and plenty of animation work is keeping the team very busy at the moment.

As with all my titles, HMS is an abstract of the time period and conflict, there will be no circling the enemy firing guns for 5 mins , that has been done (to death) enough times already. HMS is not a navy battle simulation but rather a Ship and Crew management system with a strong Nelson’s Navy theme and a respectful salute to tradition.”

The weakest aspect of 2017's best sub game may well turn out to be the strongest part of 2018's best sub game. In Deep Water Studio's UBOOT your relationship with your crew can be as turbulent as the winter Atlantic. Like HMS this is a game in which hulls fade to reveal the bustling communities within and military hardware plays second fiddle to fetid, fractious mariners. Developers Michał Nowakowski and Marek Bartniczak on the current state of the code and the challenges still to be overcome: 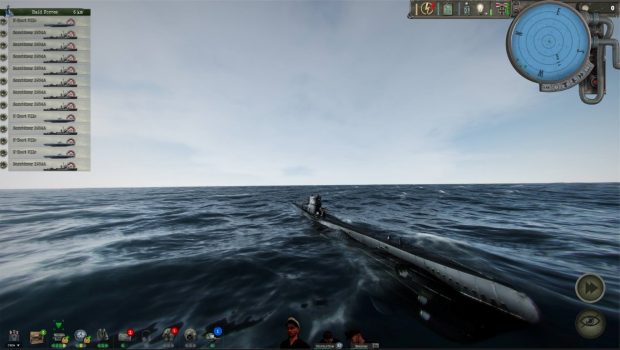 Michał: “We were at full throttle for most of 2017. There were good periods and periods when we felt we were beating our heads against a wall. We had to gain a lot of new knowledge and skills. Expectations grew. We changed, improved and invented many elements. Finally, though, all the planned mechanisms are implemented. Sandbox works, macro-management too. You can fight the enemy in various ways. The U-boat is filled with details. Crews live and work. It's been exhausting, but when we were putting together the last movie and watching the effects, we finally saw how massive and detailed UBOOT is and we were very proud.

Marek: Last year was incredibly important for us. We hit many obstacles in production, but stayed afloat. Full funding from PlayWay allowed us to fulfill our full vision for the project - more simulation elements, more sandbox, more freedom. That seemed to be what our community wants from us and we did our best to follow that lead.

To make for less scripted gameplay and generate more interesting situations we tried to give the player and AI as many tools as possible. All ships in the world now interact with each other. Other U-boats hunt on their own. Warships aid nearby transports. Escort carriers launch patrols. The addition of a Kriegsmarine HQ also introduces many interesting possibilities into the game. 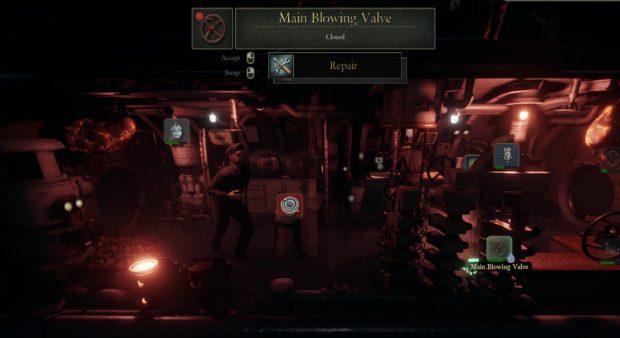 Internal U-boat systems and crew mechanics also received a lot of attention in 2017. When our goal changed to 'proper simulator' all major devices, meters and potential hazards had to be researched, modelled, and tested. Storage space management, brigs, landing parties and crew skill trees were reworked literally several dozen times. Crafting genuinely useful and realistic skill sets for WW2 U-boat crews turned out to be a Sisyphean labour, but we feel we got there in the end.

Major changes to the Unity engine added to the workload too. While we are very happy with the improved looks and performance, it was a major challenge to constantly update a project of UBOOT's scope. 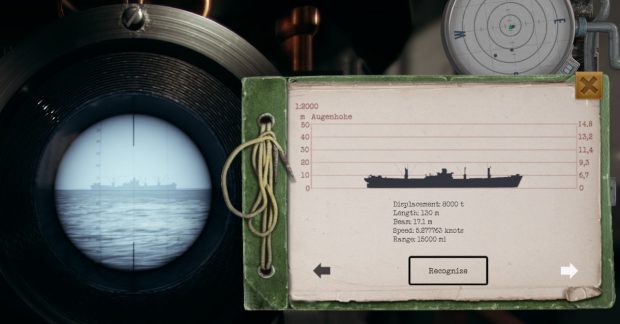 We are going to release the game in 2018 (right now we're aiming for the second quarter.) So far we are still receiving lots of good comments and advice  on what should or must be improved before the release. Some parts of the game still have a raw feeling, but we are confident that we are now on the final leg. 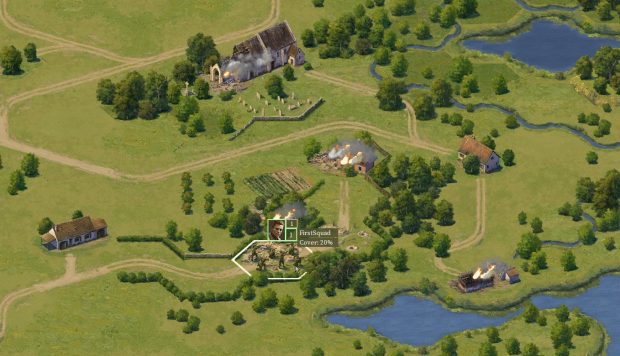 Thanks to titles like Close Combat and Combat Mission every Tom, Dick, and Harriet now has a pretty good idea of how to ambush Tigers, site MG nests, and shamelessly exploit map edges. Burden of Command is keen to remind us that there's much more to leadership than tactical acumen. Half trad hex wargame and half Fighting Fantasy gamebook, Luke Hughes' leadership RPG is all about motivating, trust building, and culture instilling. How's the project proceeding? Here's Luke's thoughts on the past, present, and future.

Burden of Command's progress in 2017 was both mechanical and spiritual. Mechanically, we created a "StoryTeller" engine based on Inkle's Ink narrative scripting language (as seen in 80 Days and Sorcery!) that gives us the flexibility to dynamically trigger "choose your own adventure" battlefield moments. We completed a graphical engine that is flexible enough to cover combat terrains from Vichy French Morocco to snowbound Germany. Finally, we began serious work on our psychological battlefield engine – the device that generates  tactical “burdens of command”, the choices which enable you to influence your own men's and the enemy's morale through rallying, suppressive fire, personal actions etc. 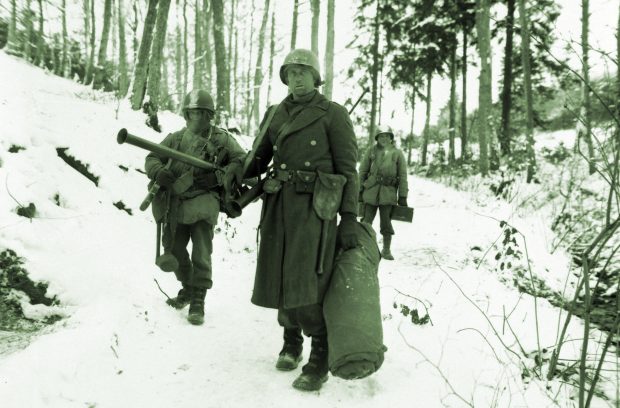 Spiritually, thanks to writers Allen and Paul, it's now possible to journey with the Cottonbalers from North Africa to the very gates of the Reich. Undertaking that journey, watching  mindsets develop, is already affecting. When I look at pictures of the harsh conditions of winter 1944 that accompany the narrative, I feel a strong emotional connection with the men who actually fought. I feel empathy not just for my NPC officers and men, but for those real soldiers of 1942-45. It is a powerful feeling. 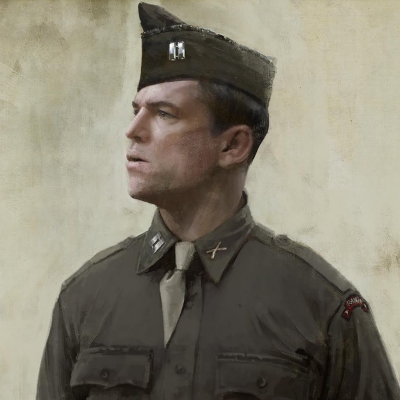 The other spiritual journey for us was the addition of multiple new veterans  from many nations’ services as playtesters. Quite a few have combat tours under their belt which has made them invaluable to us as we strive to provide an emotionally authentic experience.

Similarly, reaching out and connecting with our enthusiastic and supportive community via Twitter and Facebook has been highly motivating. Having those conversations is a personal priority for me. 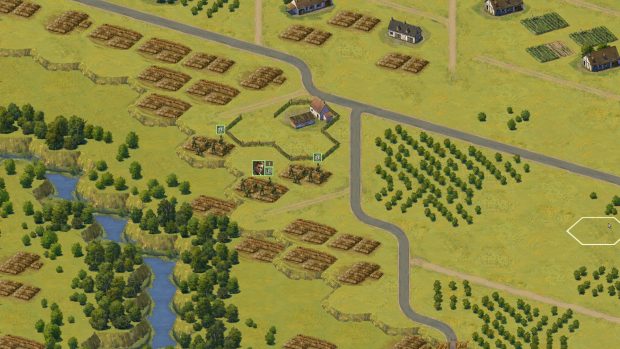 Am I happy with the progress made during 2017? If there is one truth to software development, it is that the human mind is sadly incapable of anticipating the complexities of creating those remarkably complex mechanical artifacts we call game engines. With many of working on this in our free time as a labor of love, our effective full-time employee team size is around three people. This means that  inevitably everything takes longer than expected, especially on the coding side.  And that will continue to happen!  So of course progress was not as fast I personally would like in 2017. That being said our goal is still a 2018 release. Even when the tactical engine and its AI is done the process of integrating the narrative elements into gameplay, play balancing across 18+ scenarios, and keeping the experience taut will be challenging. Central to our success in making a compelling gameplay experience is playtester feedback. We ask playtesters to rate scenes and assess everything from historical accuracy to writing quality. Multiple surveys have already produced much invaluable data. We hope to do the same on the tactical gameplay side and again we'll listen hard and iterate.

Our community should rest assured that in the end our core commitment, especially given the sacredness of the subject matter, is to deliver a quality experience rather than meet any arbitrary schedule. Speaking of which, those wishing to track our progress more closely should consider signing up for our newsletter.