A is for Alphabetised wargame and sim news. Every four weeks or so I hang up a streamer of industrial strength fly paper in The Flare Path water closet and see what wargame and simulation news items stick to it. Below is this month’s bag – 25 stories, most of which involve virtual vehicles and surrogate slaughter. If you’ve visited a transport museum or heritage railway in the past twelve months, or can put these battles – Tsushima, Thermopylae, Trenton – in chronological order, you probably won’t regret clicking where it says…

B is for Barrel bombs and Ba'athists? 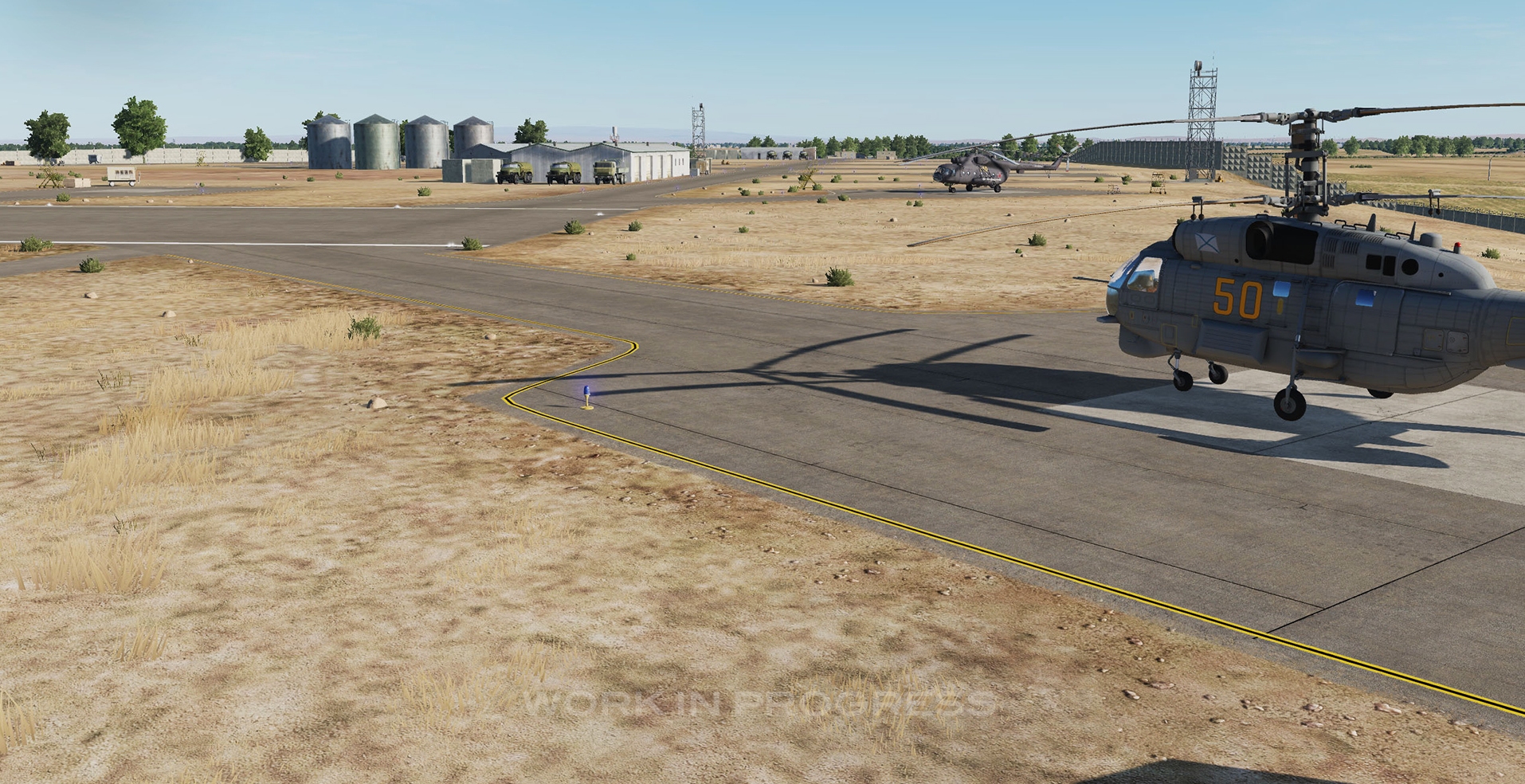 I think I've been spending too much time following the ongoing “debate” between Syrian war crime investigators and Syrian war crime deniers. When I heard that DCS' Syria map was approaching completion, the first thing that popped into my head was a mental picture of a simulated Mi-8 dropping chlorine gas cylinders on a ravaged city.

The work of third-party dev Ugra Media, the map will actually cover much of the Med's eastern end. The 32 modelled aerodromes include the international airports of Damascus, Beirut, Adana and Haifa.

C is for Corking cloudscapes

When it comes to weather modelling, the team behind Microsoft Flight Simulator aren't just pulling out all the stops, they are decorating the organ pipes with live cherubim, and hiring Rachmaninoff and Little Richard to duet.

D is for Drakeling duo 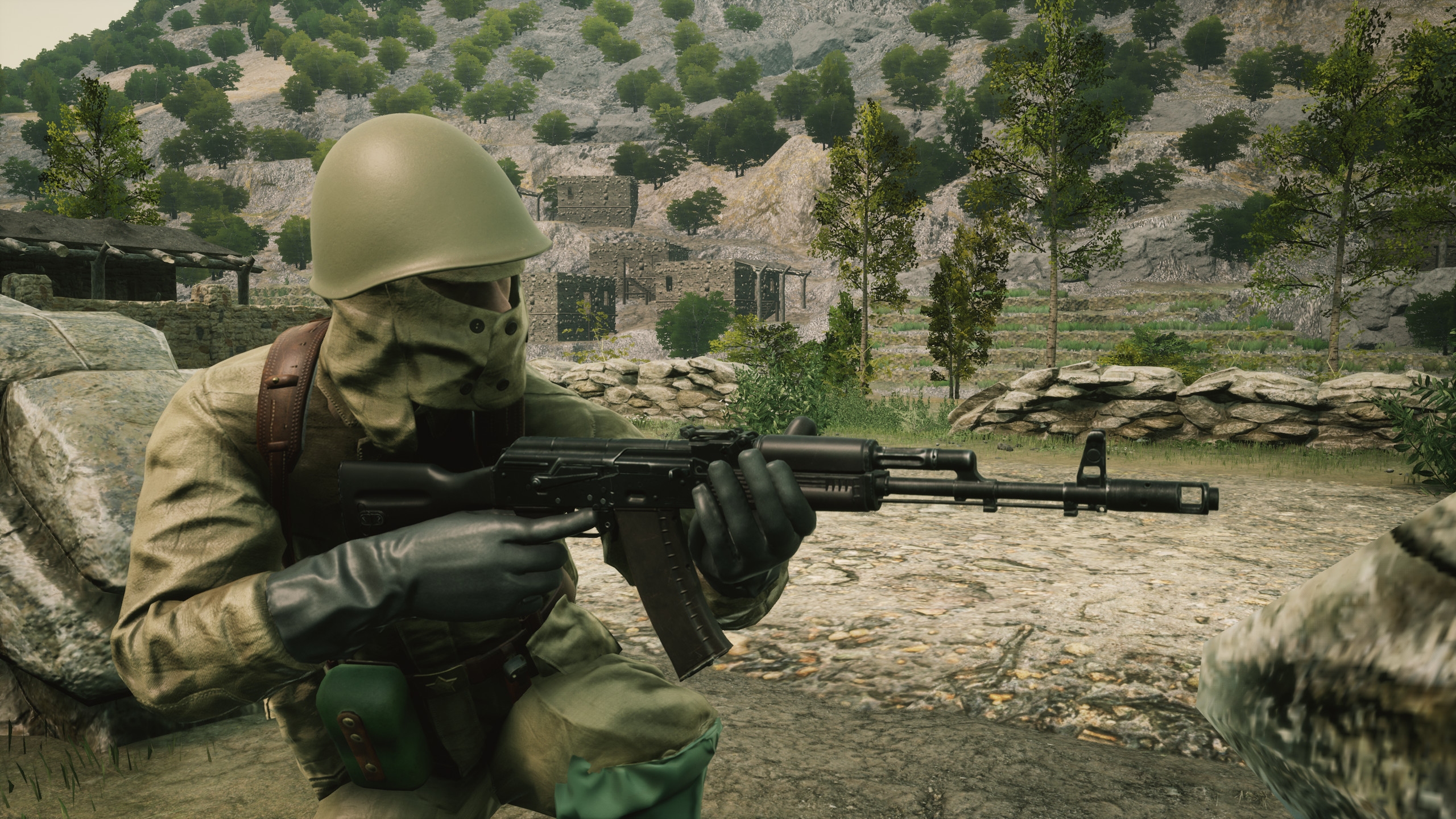 MicroProse's latest signings are two unusual military shooters presently underway at a studio called Drakeling Labs. Set in Afghanistan, totally free, and blessed with a moniker Alan Partridge would definitely approve of, Operation: Harsh Doorstep is, amongst other things, one optimistic chap's bid to transform a monetization-obsessed game industry. Its stablemate, the Red Orchestra-inspired Warfare 1944, will sport a price-tag, albeit a modest one ($10).

E is for End of the line 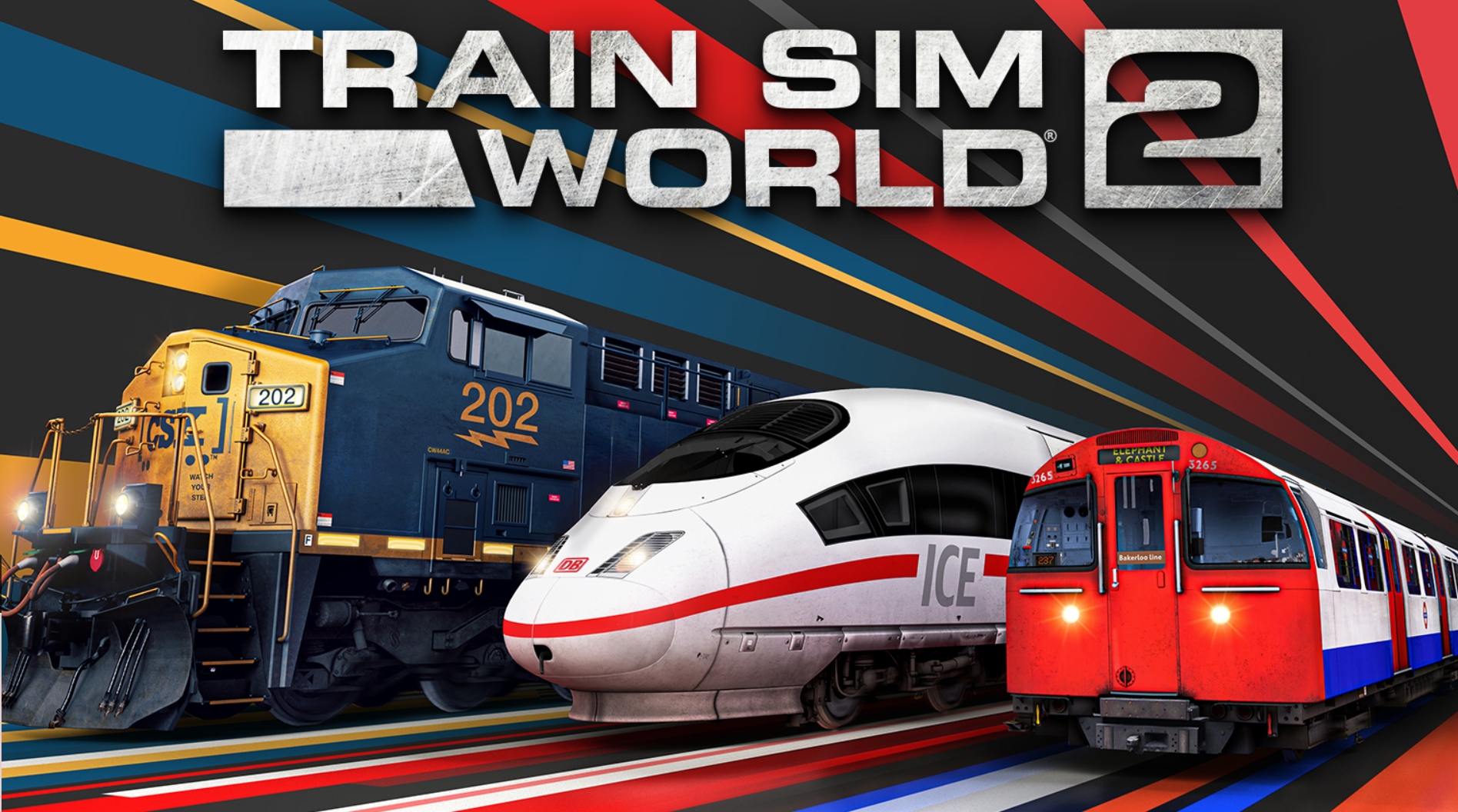 Dovetail Games has decided to treat Train Sim World the way British Railways treated the poor young Class 14s. A mere two years after gleaming hope-laden TSW took to the rails for the first time, it's set for retirement. The replacement, TSW2, will be compatible with its predecessor's add-ons, and offer improvements like plausible adhesion physics and an in-game livery designer, but many simmers are far from happy that they'll now have to buy another title in order to obtain planned TSW features like multiplayer and steam engines. 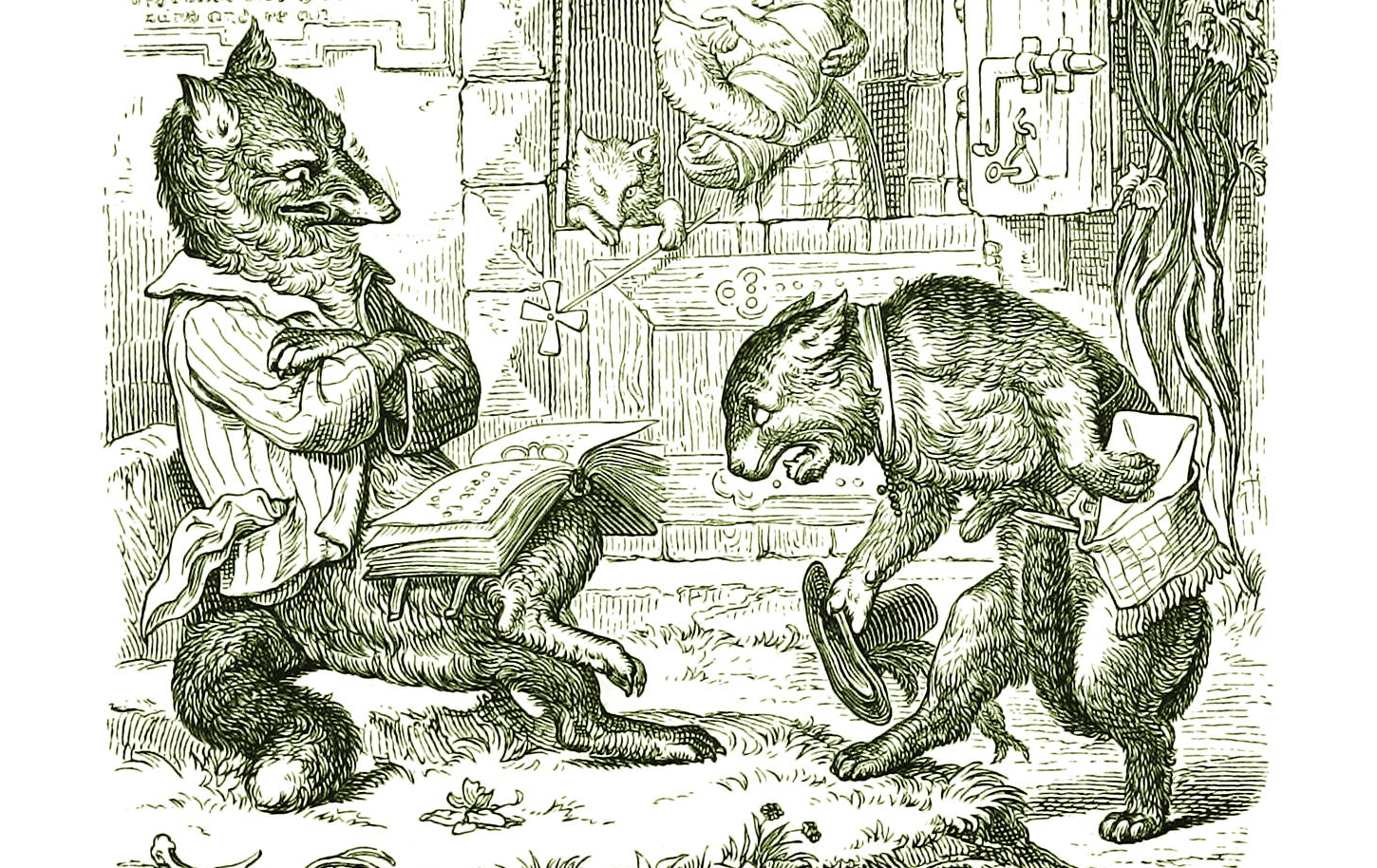 G is for Galley game with a difference 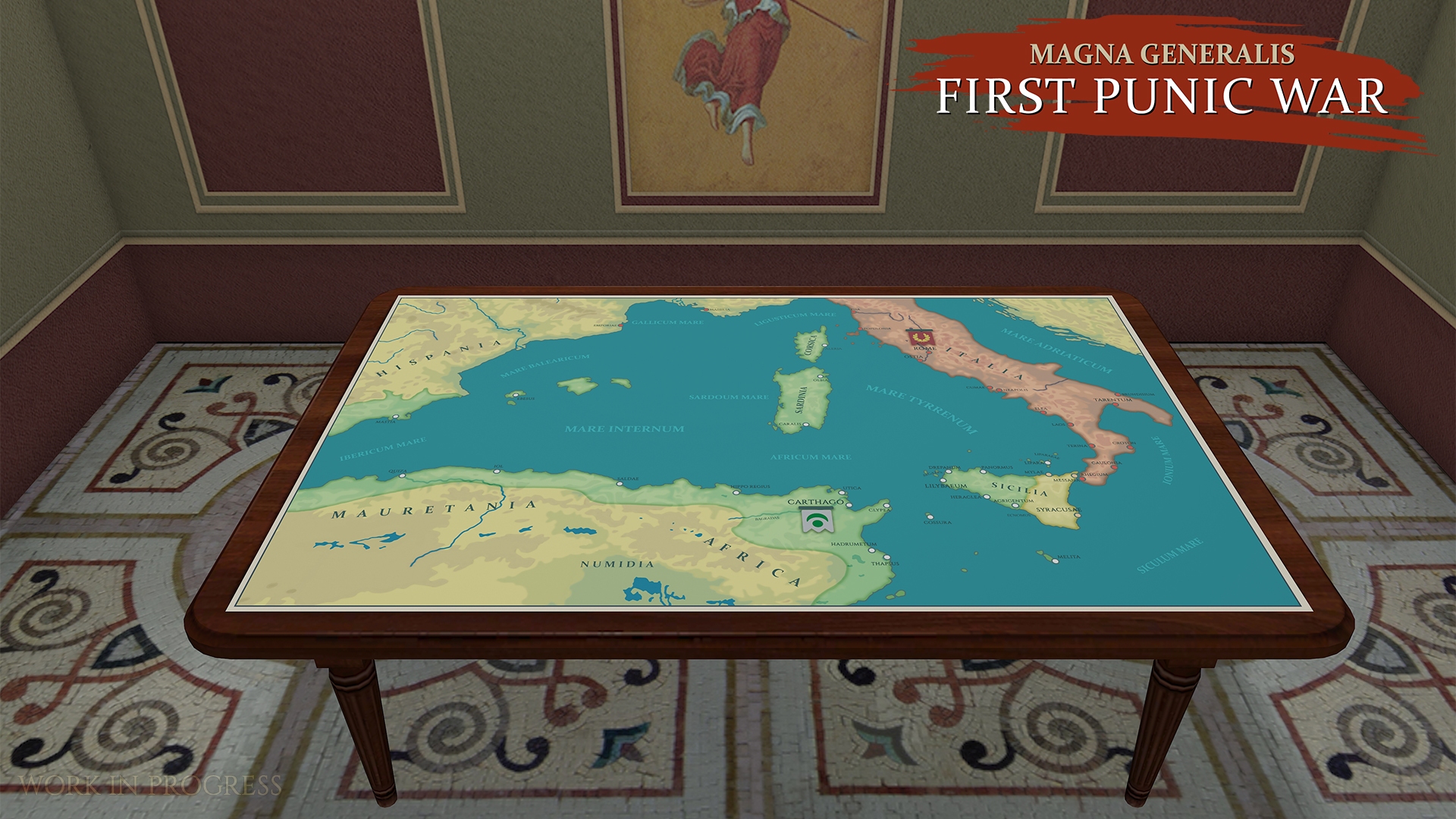 I wonder what fans of Totem Games' briny battle games will make of their next effort. Magna Generalis: The First Punic War will dispense with the 3D battle layer that has, up until now, been the studio's hallmark. All battles whether on sea or land will be chess-like affairs conducted on dinky gridded battlefields. If the new approach proves popular then treatments of other conflicts are inevitable. Magna Generalis titles devoted to The Trojan War, the Crusades, and the Ottoman-Venetian Wars have already crossed Maxim Ferapontov's mind.

H is for Hitler hoo-hah

The above cutscene has cost the Ukrainian developer of 3D Panzer General-like Strategic Mind: Blitzkrieg dear. Thin-skinned Roskomnadzor regulators took offence and have banned the hexy Eastern Front TBS from sale in Russia. Starni Games explain why the charges of Nazi propagandizing are ludicrous in this post.

I is for Italian infusion 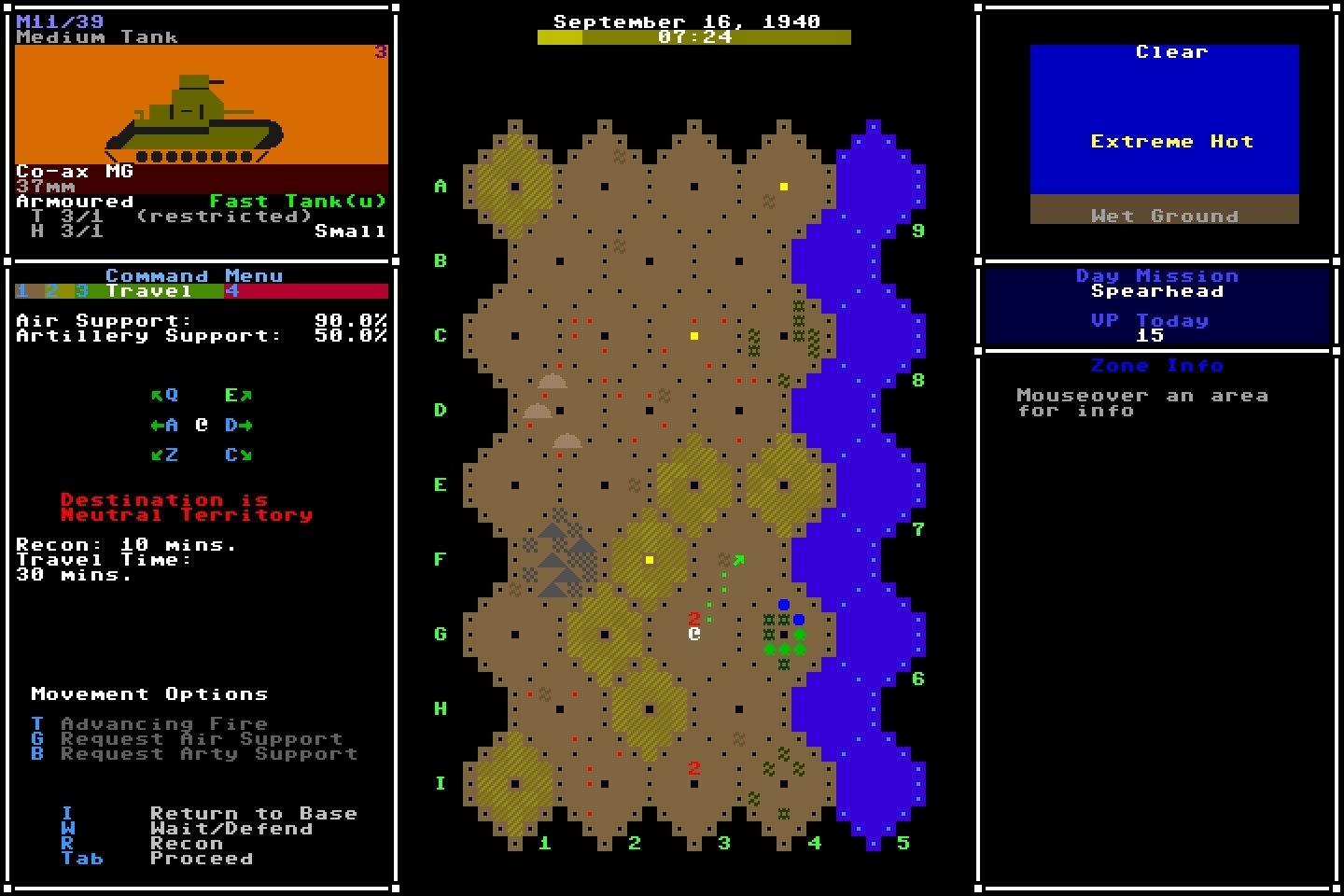 If, like me, you find yourself strangely drawn to the ungainly, obsolete, and downright feeble in sims and wargames, Armoured Commander II's newest steeds will prove hard to resist. Busy Hummel, Gregory Adam Scott, has recently added Italian deathtraps like the L3/35 and M11/39 to his caterpillared roguelike.

J is for Jetliner joystick

Thustmaster's newest desk dominators are inspired by actual Airbus controls and come with branding to prove it. The twistable, throttle-equipped TCA Sidestick has much in common with the company's TC.1600M flightstick. The pleasingly styled TCA quadrant is, externally at least, completely new. As you'd expect from a HOTAS costing a modest £150, plastic is used for most of the components.

K is for Kalashnikovs

Five things I learnt from this Gunner HEAT PC livestream.

1) Nowadays you don't need blueprints to build accurate 3D AFV models. Photos and videos can – with help from photogrammetry software – produce superior results.
2) The only things players will grind in GHPC will be friable scenery. World of Tanks and War Thunder style unlocking is not part of the plan.
3) Multiplayer will be co-op focused with multi-crewing a possibility.
4) The AFVs that will populate the sim will be NATO and Warsaw Pact steeds from the past 40 years. Requesting Panthers and T-34s is a waste of time.
5) If that chappy in the background also handles press relations, I may need to tread carefully when writing my review.

L is for Lacking key features at present

Predictably tough on frame rates and offering some flat top enhancements that are available elsewhere for free, the £33 Early Access add-on temptingly trailed above hasn't enjoyed a rapturous reception everywhere. How quickly Supercarrier puts its 'mixed' Steam rating behind it will likely depend on how quickly ED attend to bugs and deliver promised features like an Air Boss station and a more extensive range of LSO controls.

M is for Mend Mercuries

Patient Plane Mechanic Simulator erks are finally getting the after-sales service they deserve. Hot on the heels of a free Hurricane comes news that a gratis Blenheim is on the way. The Bristol machine is a fine choice. It means spanner wielders will be let loose on radial engines at long last.

N is for Not a game about biscuit factories 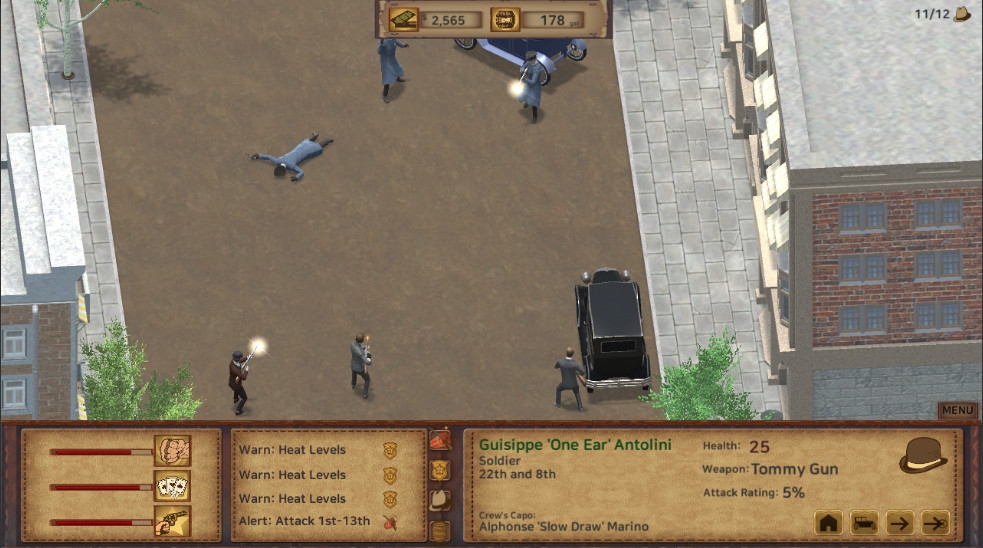 O is for On the horizon 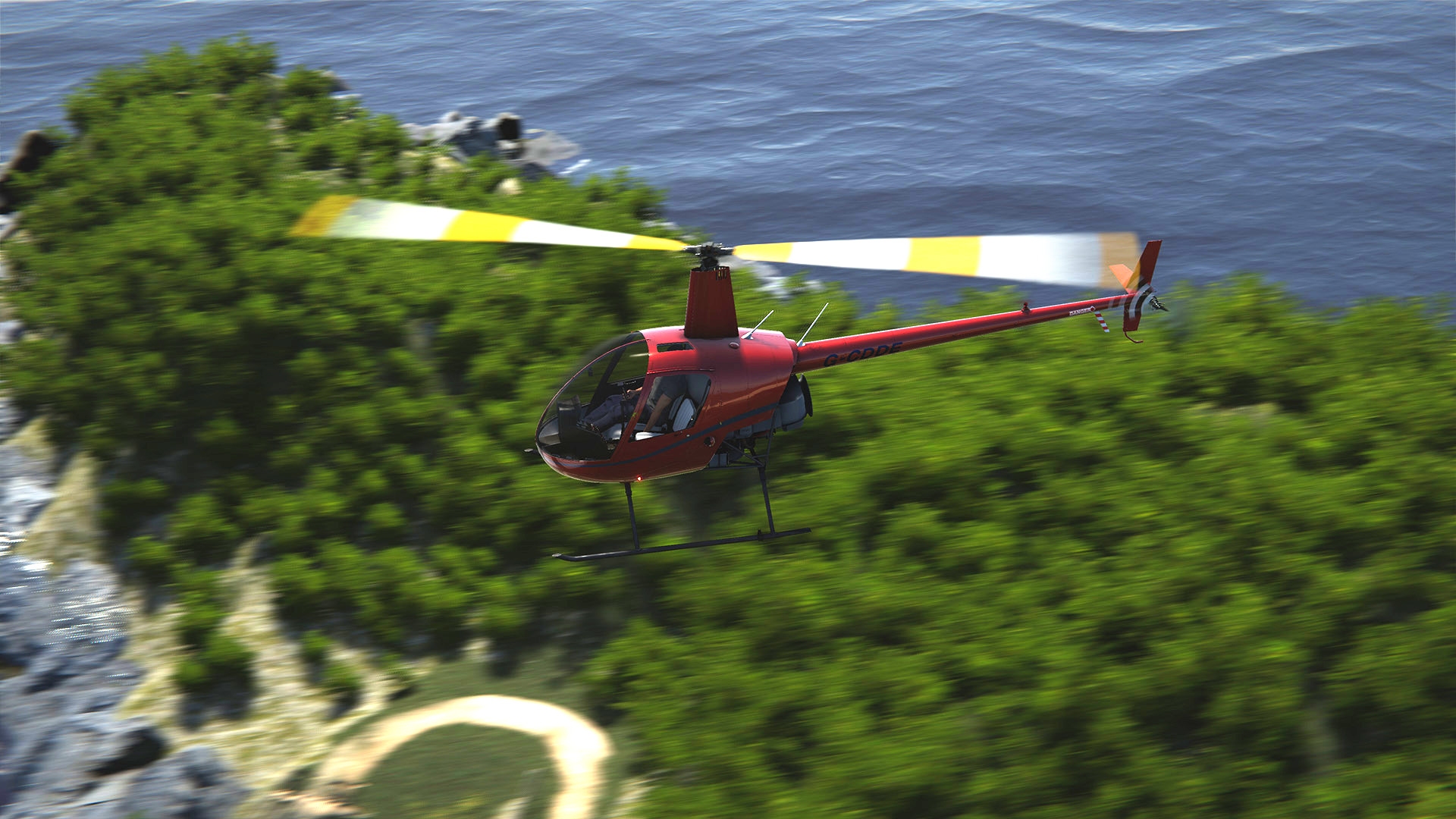 It sounds like “ultra-realistic” whirlybird sim Helicopter Simulator isn't that far off. Having solved some performance problems related to vegetation and the size of the fictional island setting, Lines Studio is now just a few weeks away from distributing demos of their standalone R22 evocation to “influencers and journalists”. Assuming I fall into one of those categories, I'll share impressions when the time comes.

P is for Pay nothing 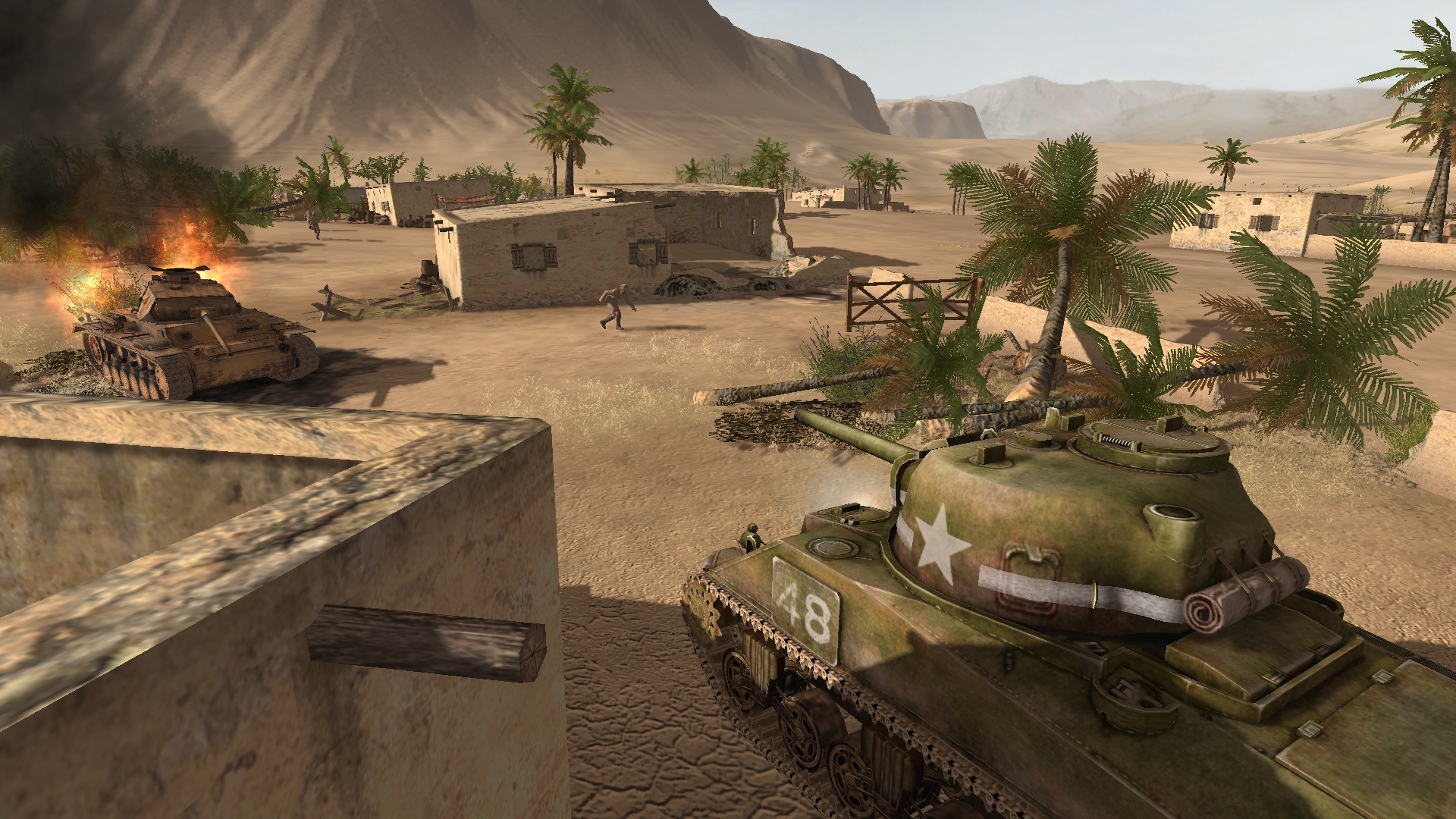 By Gad, I'm ancient. I remember covering the release of the not-half-bad Theatre of War 2: Africa 1943 (now free on IndieGala) on this site back in BQ (Before Quintin) days. 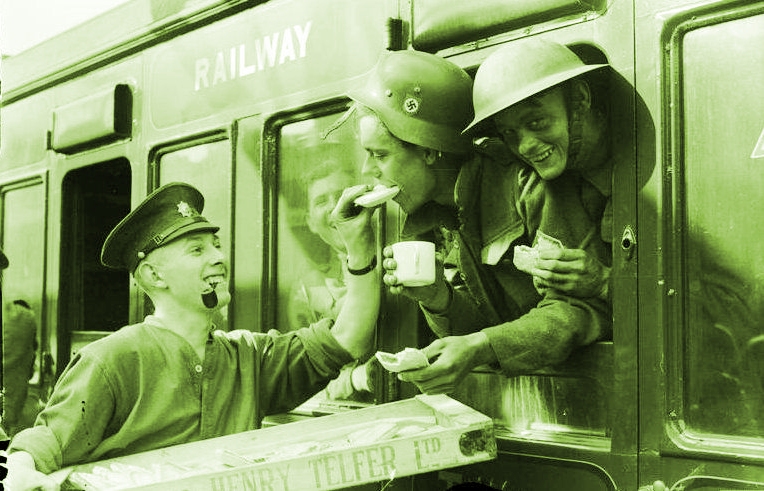 R is for Romanian rarities 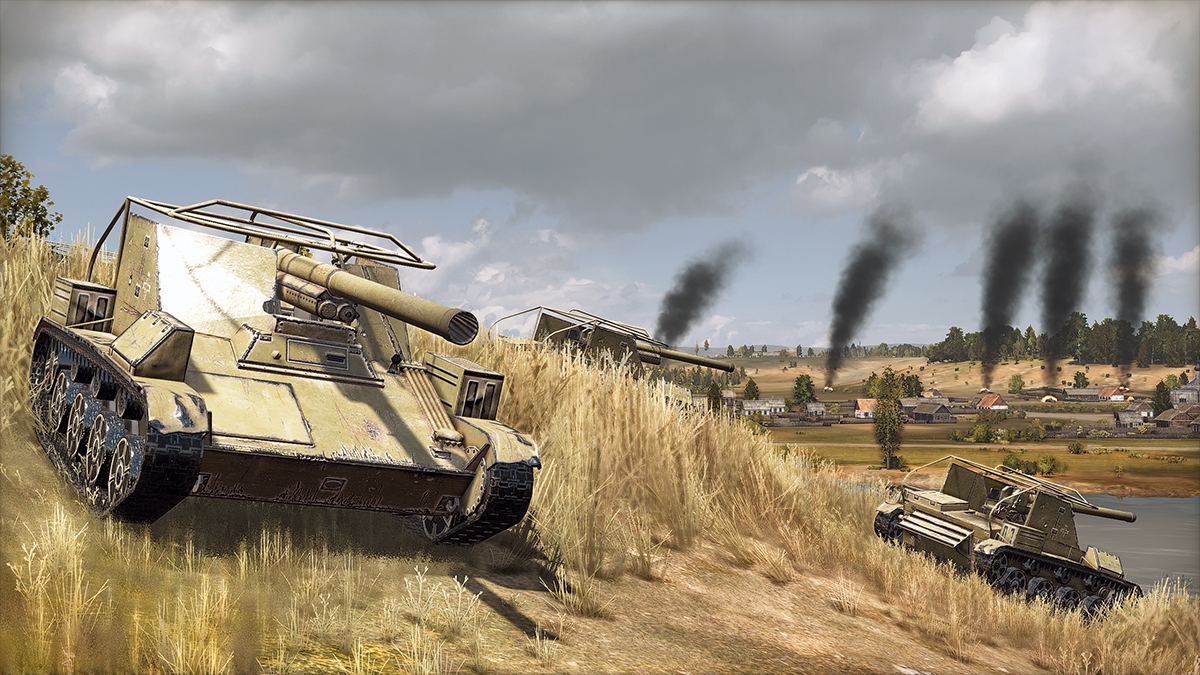 Exposure to Steel Division 2's next DLC is guaranteed to improve your defoxing skills. Black Sunday's interest in the Romanian Front means outings for seldom-ludologised WW2 war machines like the IAR 79 and TACAM T-60.

S is for Spain next 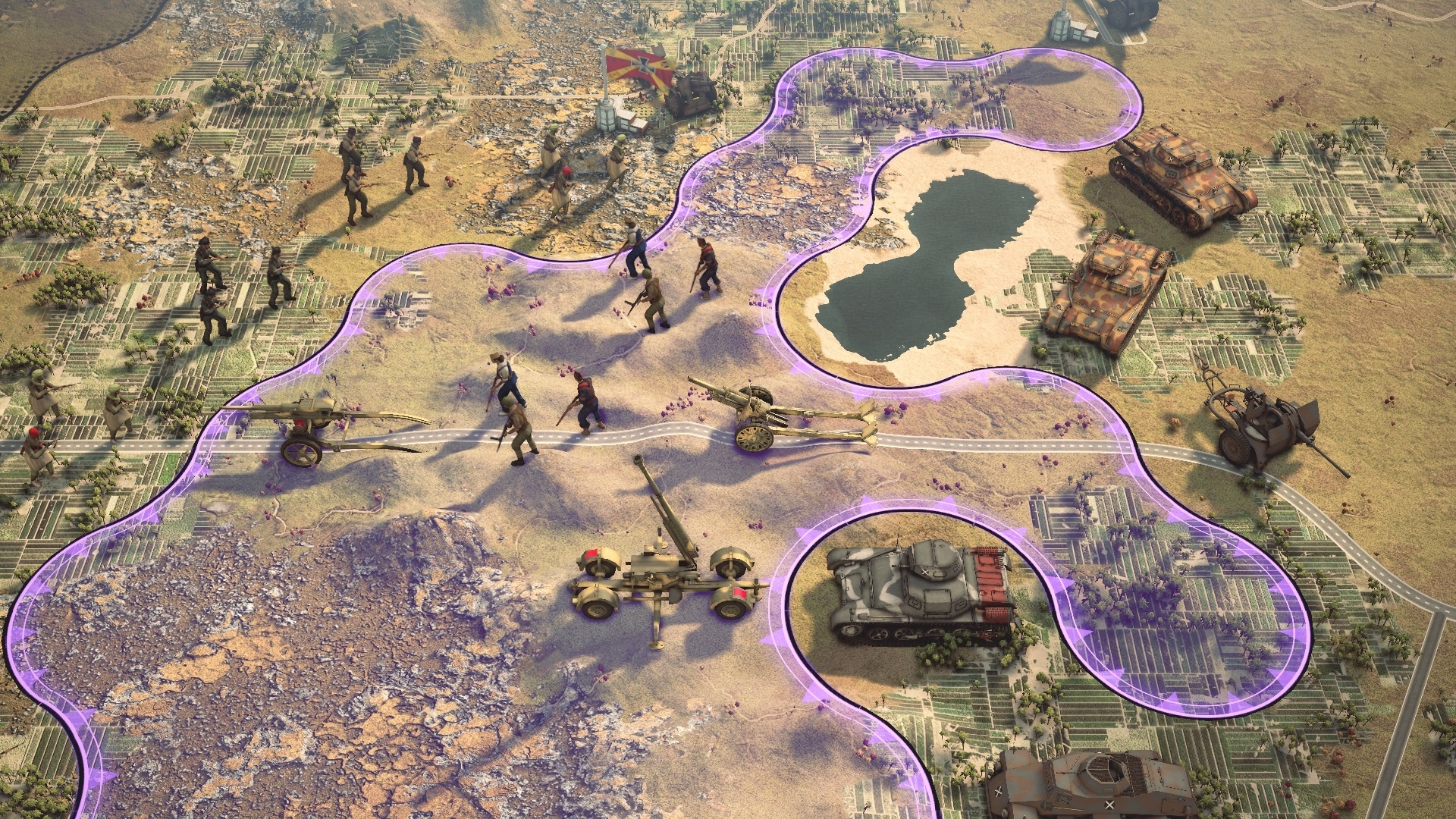 One of Panzer Corps 2's least likeable traits, binary VL-dependent victory conditions, will be addressed in the game's first DLC. In addition to introducing biddable allied forces, Spanish Civil War will come with a campaign dotted with rescue, escort, interception, and mine laying missions. Thanks to something Flashback call “Degrees of Victory” failure to fulfil all primary objectives in one of these outings won't necessary mean a scenario restart.

T is for Tactical withdrawal

High-fidelity armour sim Steel Gear Stalingrad is about to vanish into a birch wood from which it's unlikely to emerge for at least two years. In order to stay on the right side of Spanish laws - laws that mean self-employed people have to pay substantially larger National Insurance contributions from year 2 onwards - developer Álvaro Bermejo will be suspending sales of the alpha in eleven days' time. Current owners will continue to get new builds after June 30 but everyone else will have to wait until the beta arrives to try the sim.

U is for Unconcerned?

I hope ICBM isn't as blithe as this summary suggests:

“Take command of one of the continents of the world and prepare yourself for global nuclear conflict. It is your job to ensure the complete and total destruction of your enemies, while you do all in your power to prevent enemy retaliation against your peace-loving citizens.”

I'd argue M.A.D. strategy games need either a conscience or a generous dose of dark satirical humour.

V is for Vie for Venezuela 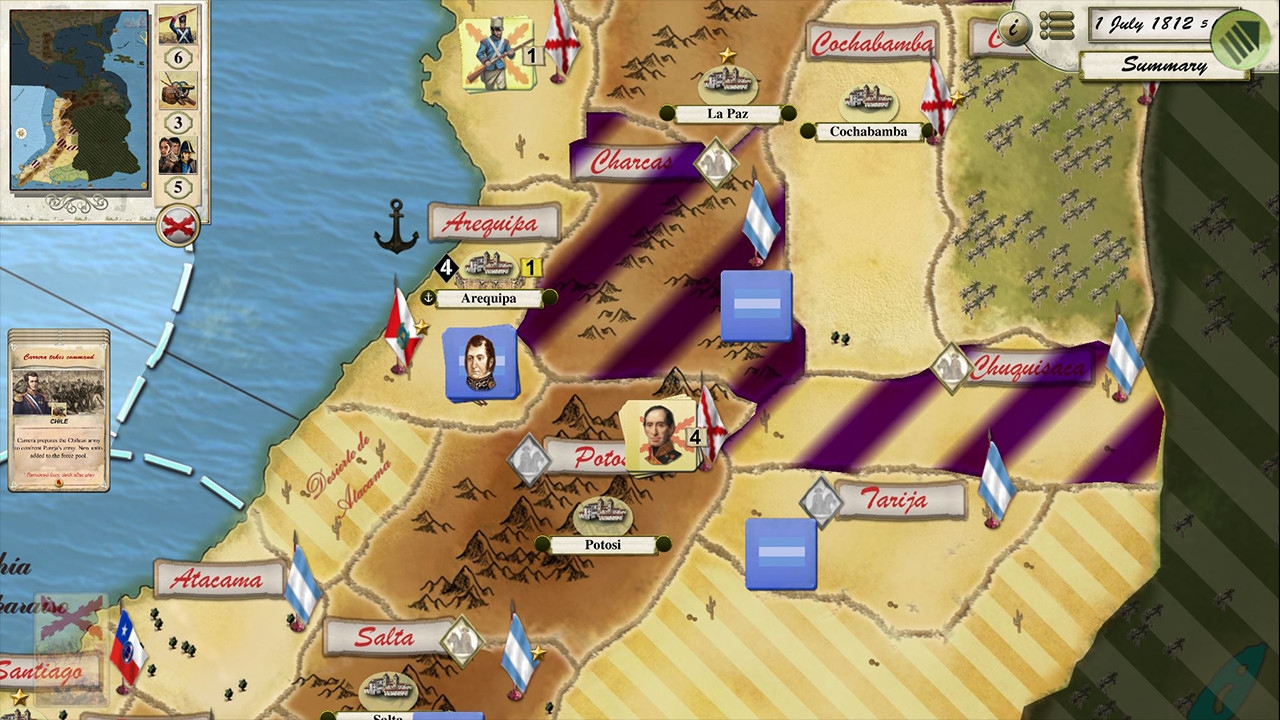 Cruelly cold-shouldered by generations of game devs purely because he chose to demonstrate his military genius in South America not North America or Europe, Simón Bolívar must, it seems, rely on low budget/profile standalone Wars Across The World spin-offs for ludological limelight. I've already seen enough of Libertad o Muerte's familiar mechanics and colourful event cards to realise that the game is likely to be pleasant, stimulating company. What I've yet to get a feel for is AI acumen.

Although last weekend's rFactor 2-powered 24 Hours of Le Mans race had its fair share of technical problems, there was plenty of excitement and all the competitors were who they said they were, so most of the press it generated was positive in tone. If the organisers had issued the equivalent of a Man of the Match award then Jesper Pedersen would surely have won it. Due to a controller problem, the ByKolles driver drove two laps using a cursed steering wheel that reversed his inputs. 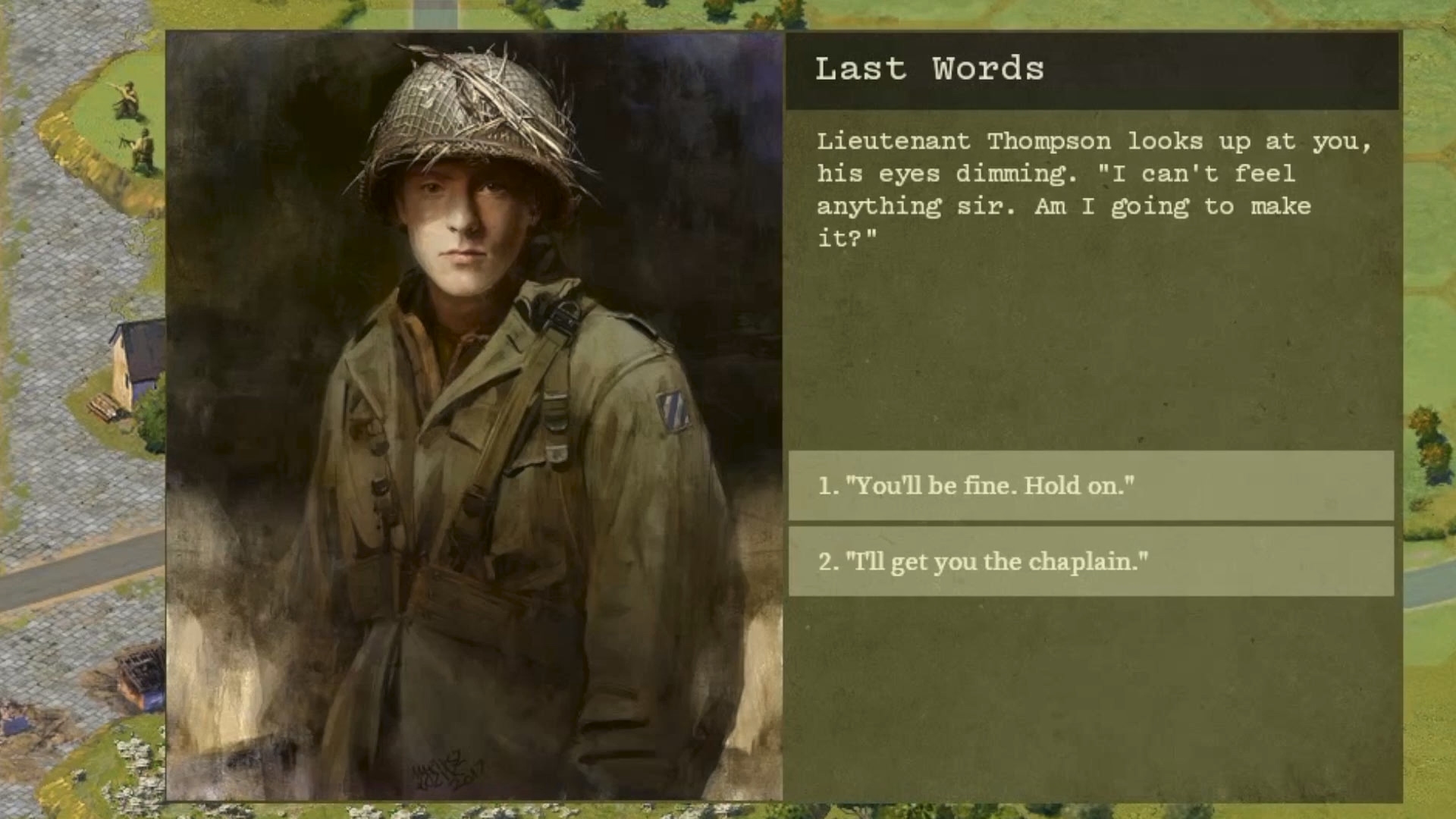 While I prefer my Commandos-likes f**k-free, I think I'd actually like to hear more strong language in serious WW2 tactical fare. Many of the devs that sweat blood ensuring warriors look the part, show little or no interest is ensuring they sound authentic. Upcoming military leadership RPG Burden of Command is set to break rank in this regard. Guided by tomes like The World within War, developer Green Tree Games will be embracing salty language. The cussing won't be universal however. Project Lead Luke Hughes: “In the US army (and UK I think too but recall less well) there tended to be a class nature to [swearing]. Namely, officers tended NOT to curse and enlisted quite a lot... So in Burden we try to follow that guideline.”

Y is for You do everything

As SCS Software has shown zero interest in my Red Ball Express concept, perhaps I should pitch it to Simula Games, the outfit behind Truck and Logistics Simulator. Four days from an Early Access release, T&LS hasn't a hope of matching ATS and ETS2 for scope or ambience. It could however win friends with its physics and vehicular variety. I like the idea of loading my own cargoes with forklifts, cranes, telescopic handlers, and articulated wheel loaders.

Z is for Zander

..one of the hookables in The Catch: Carp & Course, Dovetail's next angling sim. The studio's short attention span and consumer-unfriendly approach to nomenclature strikes again. Understandably some hoping that Fishing Sim World would be supported for a little longer than Euro Fishing aren't best pleased by this announcement.