If you click on a link and make a purchase we may receive a small commission. Read our editorial policy.
Desperados 3 review
The sequel Desperados deserved. Up there with Outlaws and Red Dead Redemption 2 as one of the great PC Westerns. A shame about the potty-mouthed gunmen though.

Claymore Game Studios, the newly formed outfit tasked with reviving the Commandos franchise, is in need of an Unreal Engine expert, a 3D artist, a 3D animator, and a senior level designer. Whoever secures the latter job will, if they are sensible, do nothing their first week except watch old war movies and play Desperados III. Proving that the superb Shadow Tactics: Blades of the Shogun was no fluke, Mimimi have followed it with an Old West effort that's every bit as brilliant.

White Shirt, Green Shirt, Big Hat, and Poncho - four gun-toting goons occupy a small, gloomy glade on the edge of malodorous Mississippi bayou. White Shirt notices some fresh tracks on a muddy path, goes to investigate, and does not return. A few seconds later Big Hat and Poncho slap their necks in response to mosquito attacks that aren't in fact mosquito attacks. The 'bites' appear innocuous (the two men continue to scan the undergrowth) but have macabre repercussions. They are the reason the flung Bowie knife that subsequently slays Big Hat also causes Poncho to drop to his knees gargling blood. Green Shirt has a clear view of the voodoo-influenced double kill, or would have if he wasn't petting a friendly moggy when it happens. When the remaining sentry does finally look up, there's a burly Mexican standing over him with hatchet raised.

The tactical freedom that, along with handsome, atmospheric maps and likeable multi-talented characters, ensured Desperados: Wanted Dead or Alive's immortality, returns with a vengeance in the beautifully crafted Desperados III. Although I chose to cleanse that clearing with help from Hector's mantrap and axe, Cooper's knife, and Isabelle's cat, blowpipe and 'connect' power, there are countless other ways I could have tackled it. Doc's gas bottles and booby-trapped bag, Kate's womanly wiles, Cooper's six-shooters, Hector's sawn-off... with a little thought, experimentation, and help from Showdown Mode (a handy device for queuing and synchronising multiple actions) other tools would probably have done the trick equally well. Heck, if I'd wanted to I could have avoided the clearing entirely, and chosen another route to the grounded river steamer that served as the slavers' HQ. 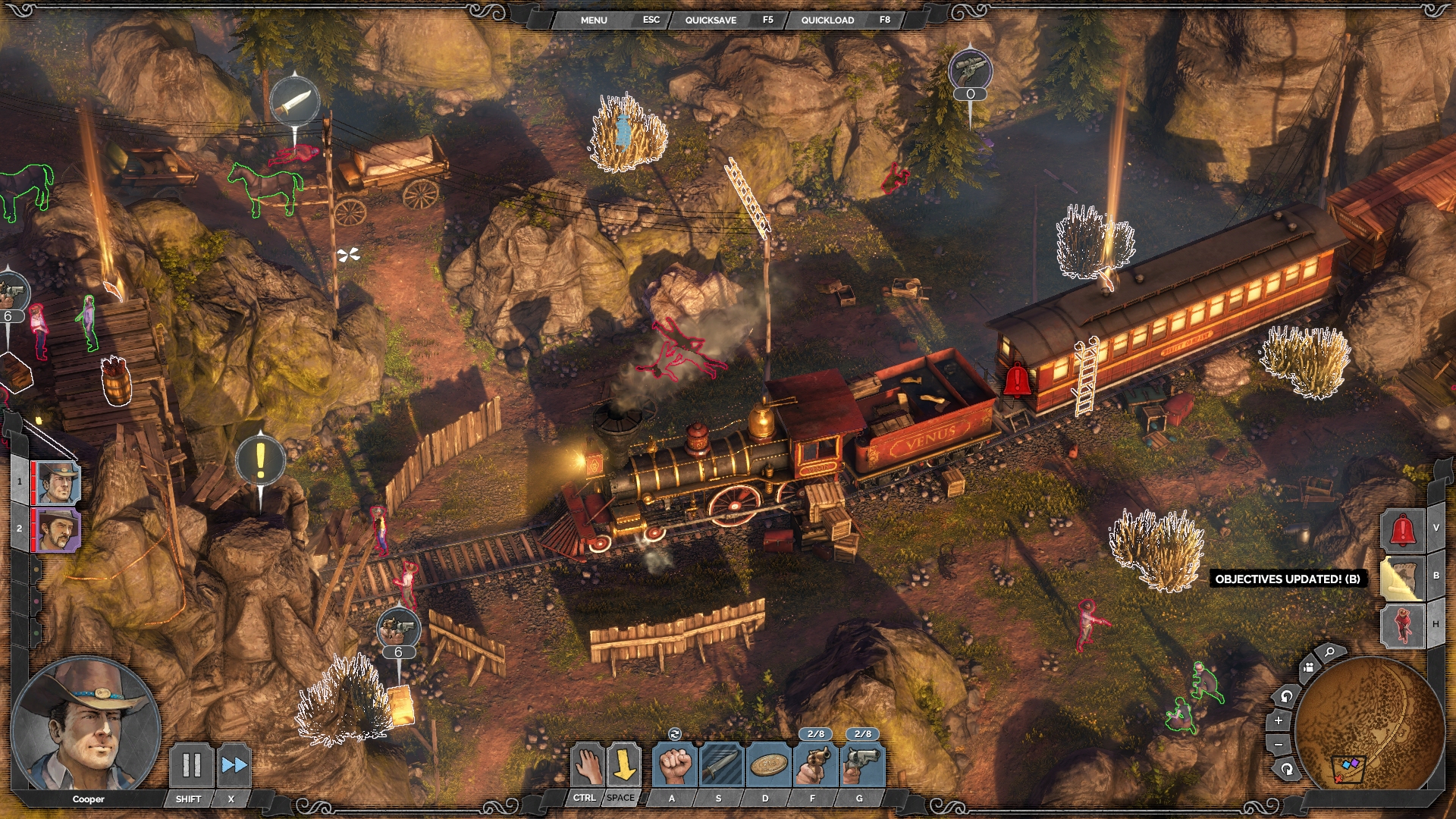 After 26 hours of sentry distracting and dispatching, you'd think the satisfaction of seeing an inquisitive cowpoke step on Bianca, Hector's giant gin trap, or a lovesick navvy follow comely Kate into a dark alley, would be starting to wane. Happily, that's not the case. With two and a half of the game's sixteen levels to go (I'm currently navigating a New Mexican hamlet bisected by an implausibly busy railroad) the impossible-to-rush henchmanslaughter is still as gripping as it was back at Eagle Pass. I put that down primarily to maps that are as imaginative and colourful as they are cleverly populated. 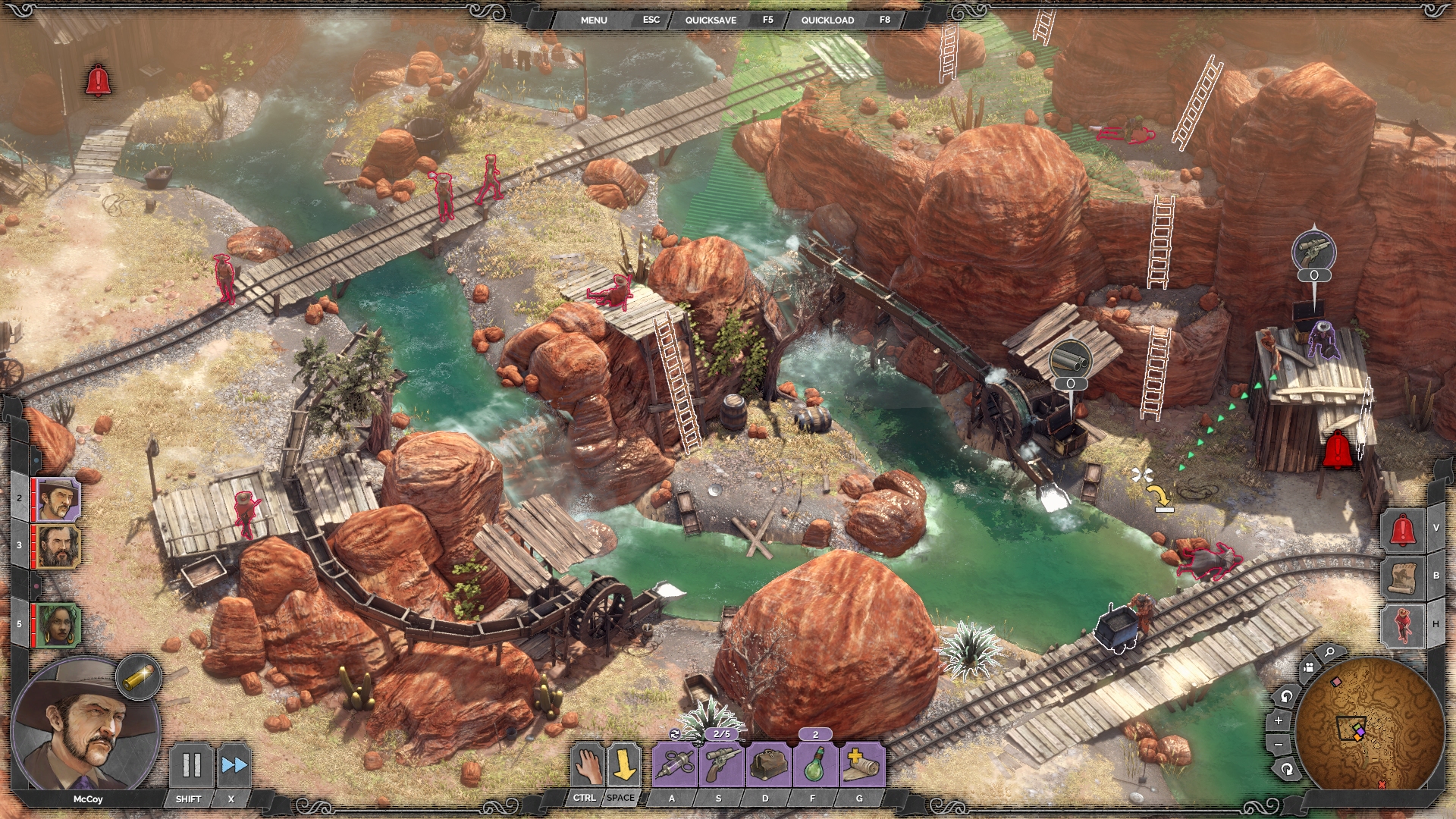 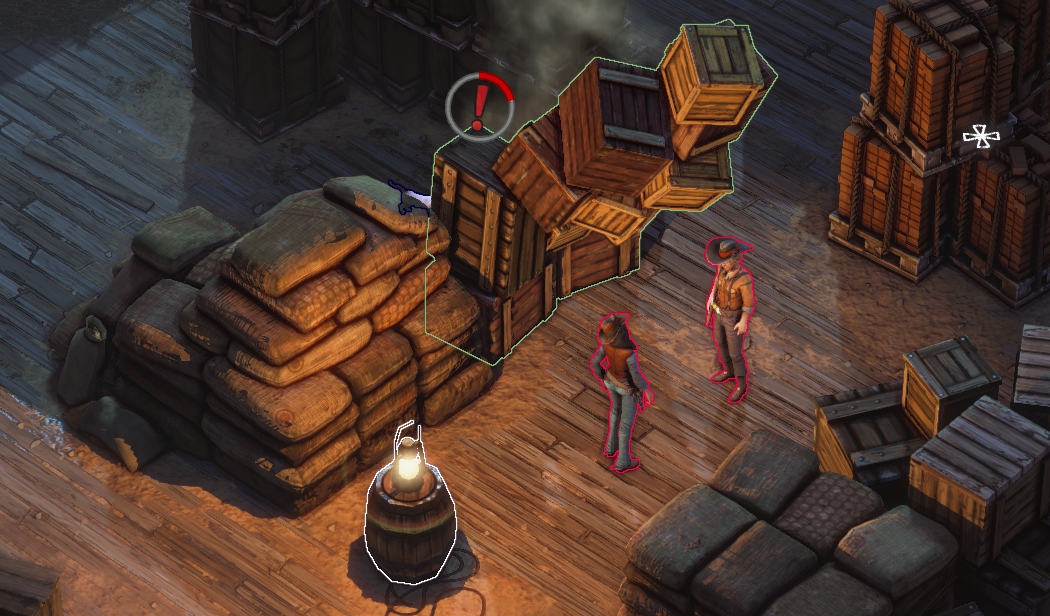 Often the fully rotatable venues, almost all of which are as intricate and entertaining as anything Pyro and Spellbound ever produced, feature environmental hazards that can be utilized to boost bodycounts. When a delicately poised boulder, dangling crane load, abandoned mine cart, or tetchy bovine endangers a Longcoat (especially tough adversaries that only Hector can melee kill singlehanded) then the temptation to work it into your plans can be irresistible. 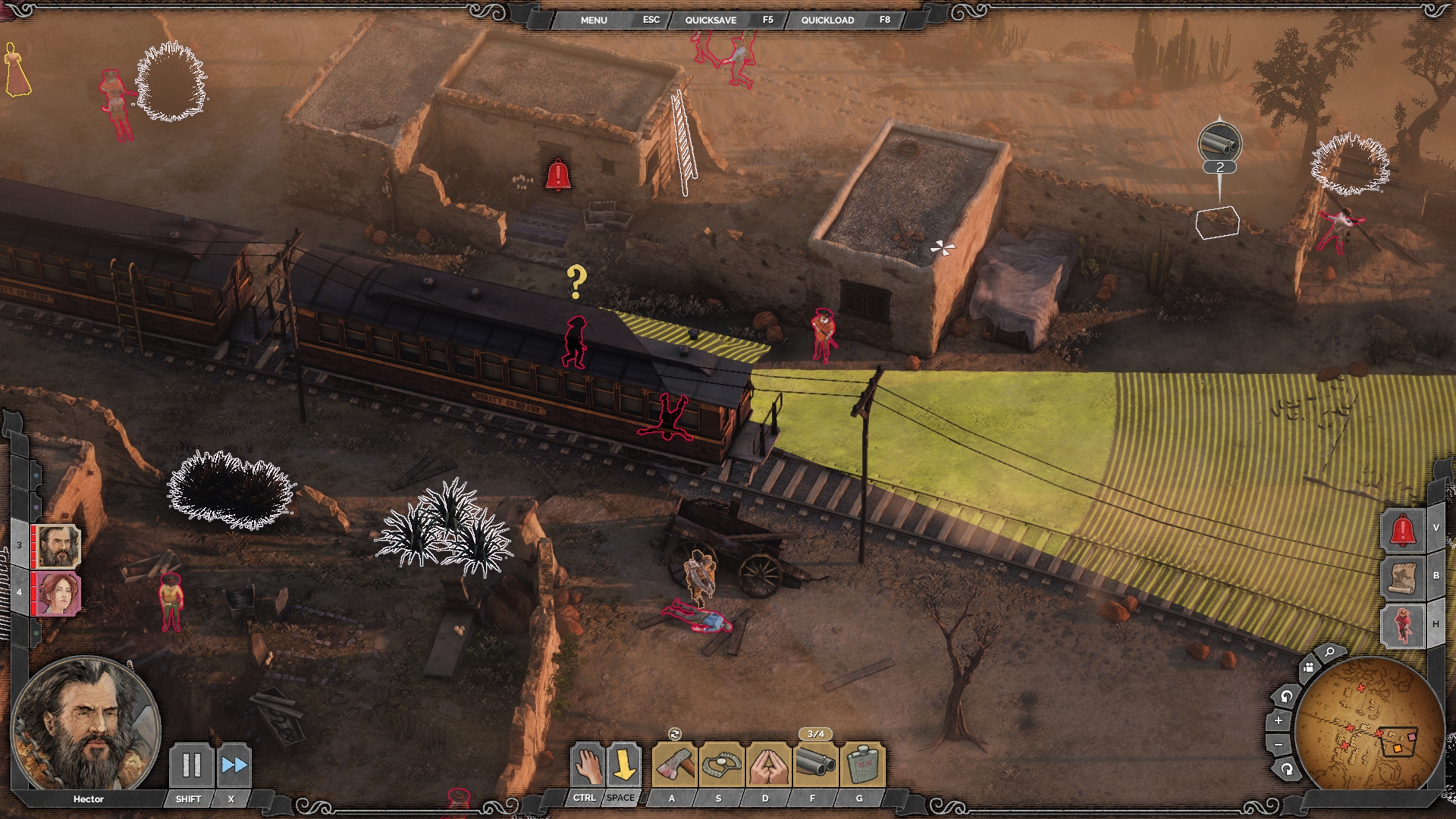 Of the hundreds of killings I've precision engineered thus far, my favourite is probably a recent one involving a moving freight train and a sentry lured onto a railroad track by a perfectly timed “I'm-over-here!” whistle. I'm smiling just thinking about it. 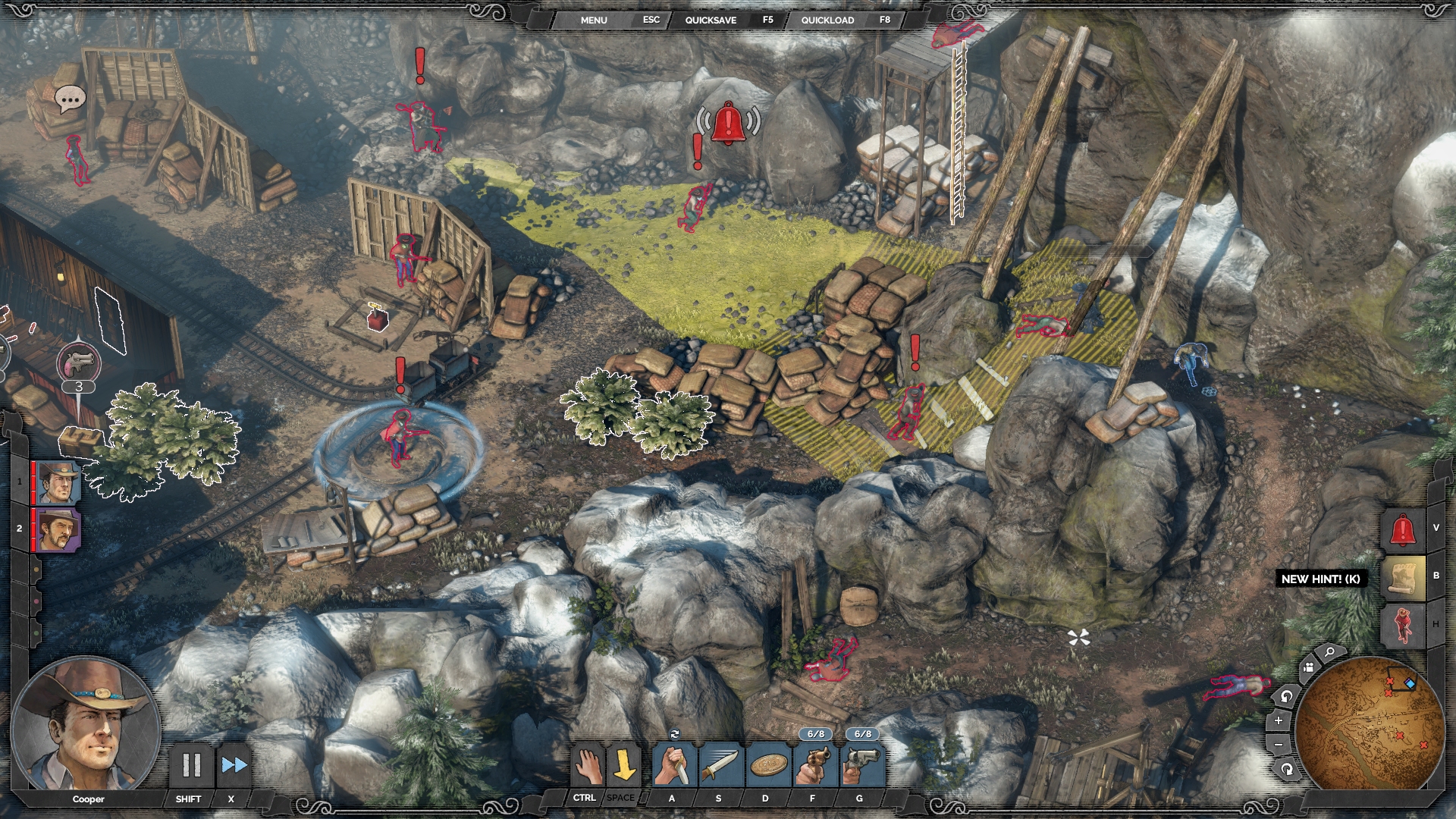 Not all map peculiarities are helpful, of course. The same footprint trails, spookable chickens, and extinguishable lanterns, that can, in sly hands, be used to draw some* sentries into quiet corners sometimes cause plans to unravel. While a spotted character isn't necessarily a dead character (KIA team members = mission over) blown cover does cause additional goons to spill from guardposts so, unless you're feeling masochistic, generally prompts a quickload.

* Ponchos always remain at their posts 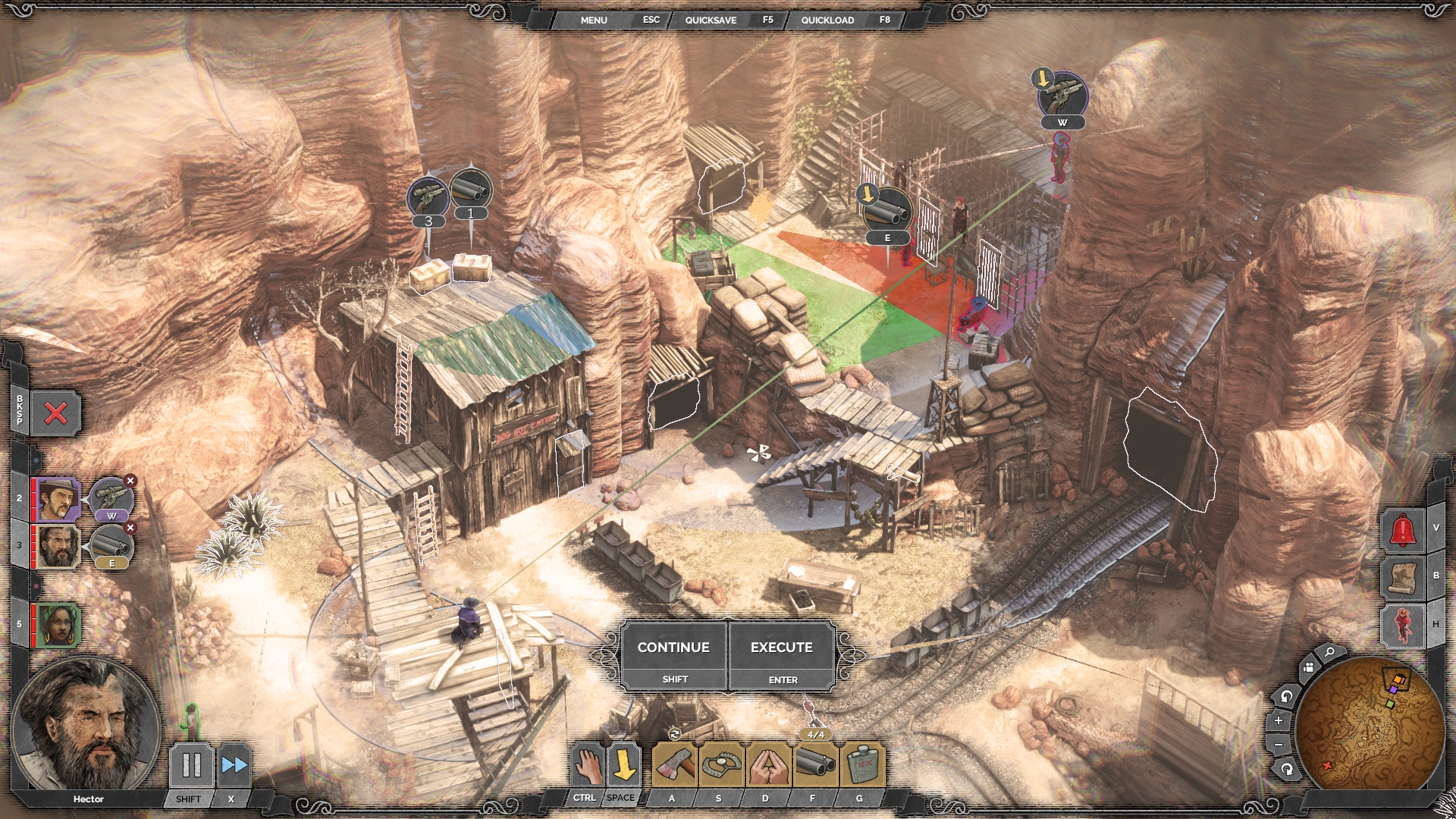 Like all titles in this inexplicably small genre, D3 is a game where savescumming isn't a dirty word, it's a way of life. The debrief screen tells me I pressed F5 (quicksave) 99 times and F8 (quickload) 111 times during the two and half hours it took me to complete level 13. These faintly horrific numbers imply painful progress... dislocated action... mounting frustration, but that's not how I remember yesterday evening at all. 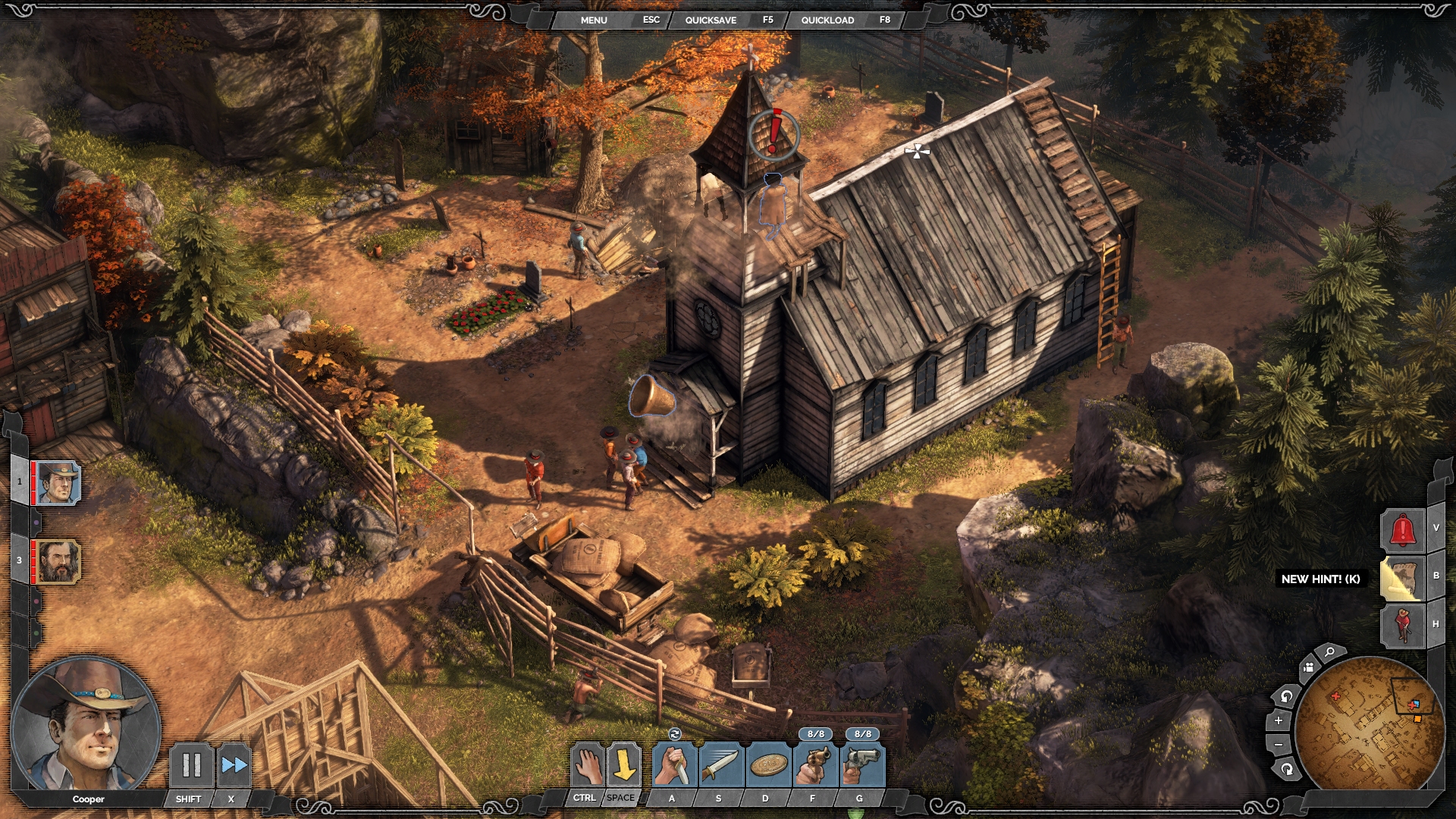 As with Shadow Tactics, the default difficulty is actually extremely well judged. The one time I rage-quit this week I was tired and attempting to bludgeon my way through a level that was having none of it. The cheat codes that came with the review code haven't been touched yet, and probably never will be. So much of the profound pleasure D3 generates comes from cracking tactical conundrums with ingenious collaborations and deft timing, that shortcutting your way to victory, even in the interests of gaining review insights, is almost unthinkable. 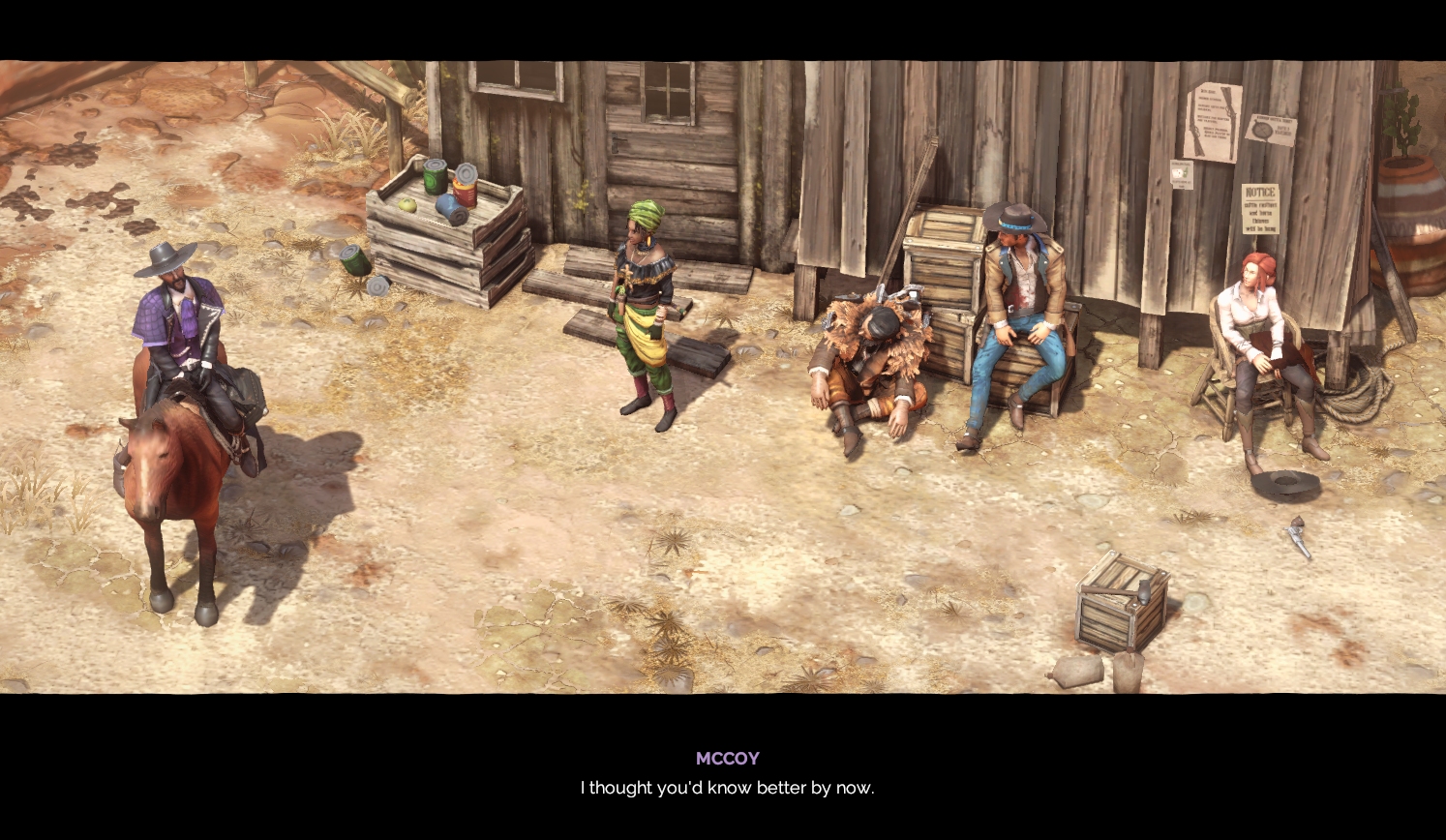 Having shunned cheats and almost reached the final chapter of a story that is, it has to be said, flimsier and less focused than the one that backbones Shadow Tactics, I can say that Mimimi's estimate of total campaign playtime - 26+ hours – is a tad modest. To whip through all the levels in 26 hours all but the most talented would need to select the easy difficulty setting or play in a very utilitarian way, ignoring the 'badges' (optional side objectives) that grace every level. Those badges, together with unlockable mission variants and the massive, multi-route maps, mean the German devs shouldn't have to field many longevity/replayability complaints. 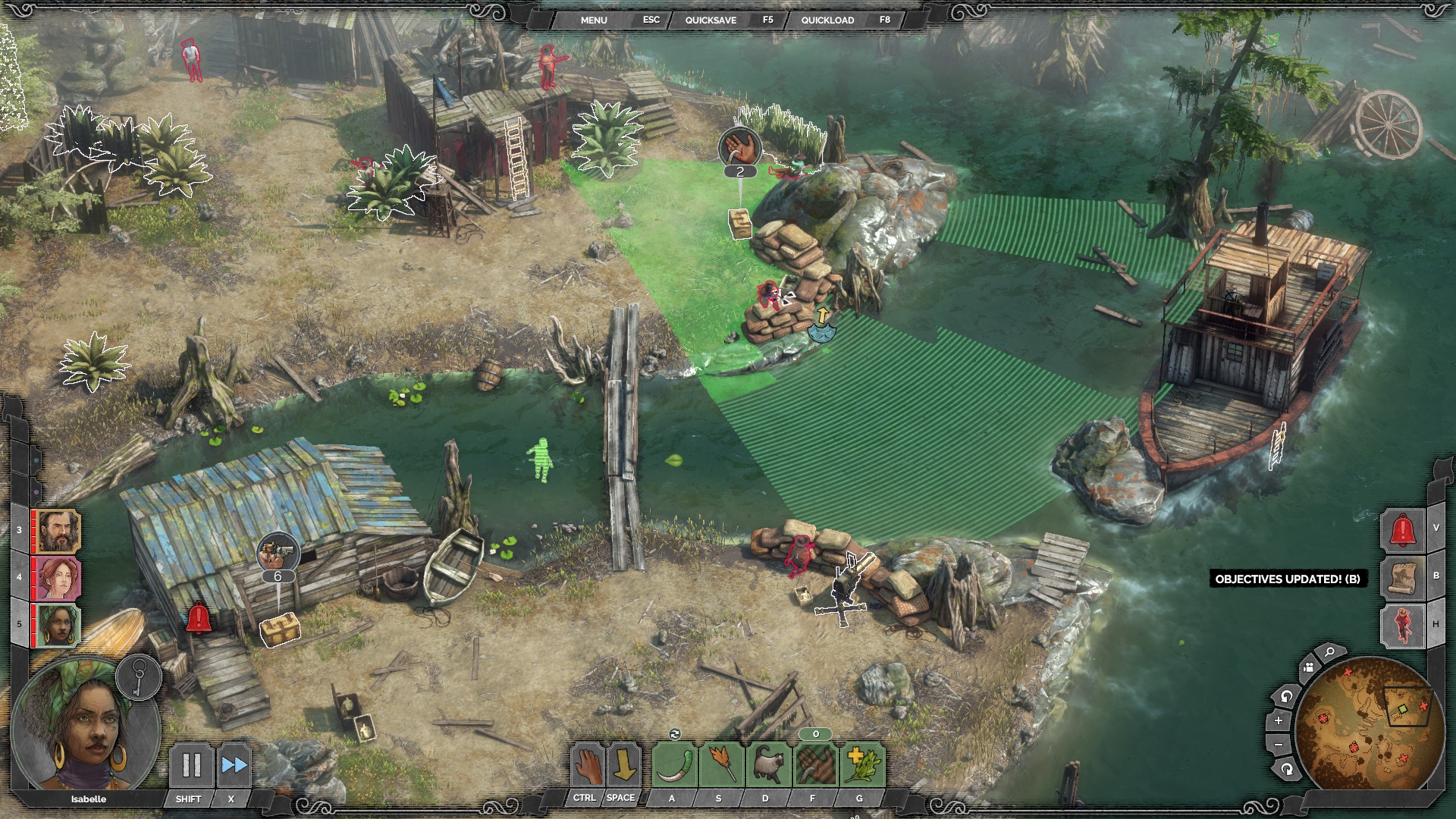 When I heard that Cooper, McCoy, Kate, and Hector (aka Pablo Sanchez) were to be joined by a “witch” this time out, my heart sank like a hogtied cowboy tossed into the Mississippi. Introduced about halfway through the game, Isabelle Moreau quickly confounded my expectations. Nicely voiced by Debra Wilson, and possessing two voodoo-inspired abilities that are refreshingly different and a hoot to use, the sickle-wielding Creole sorceress is a lovely addition to the canon. Busy 'connecting' foes and mind-controlling them, I'd be surprised if series veterans found themselves missing Mia Yung, Sam Williams, and Hawkeye. 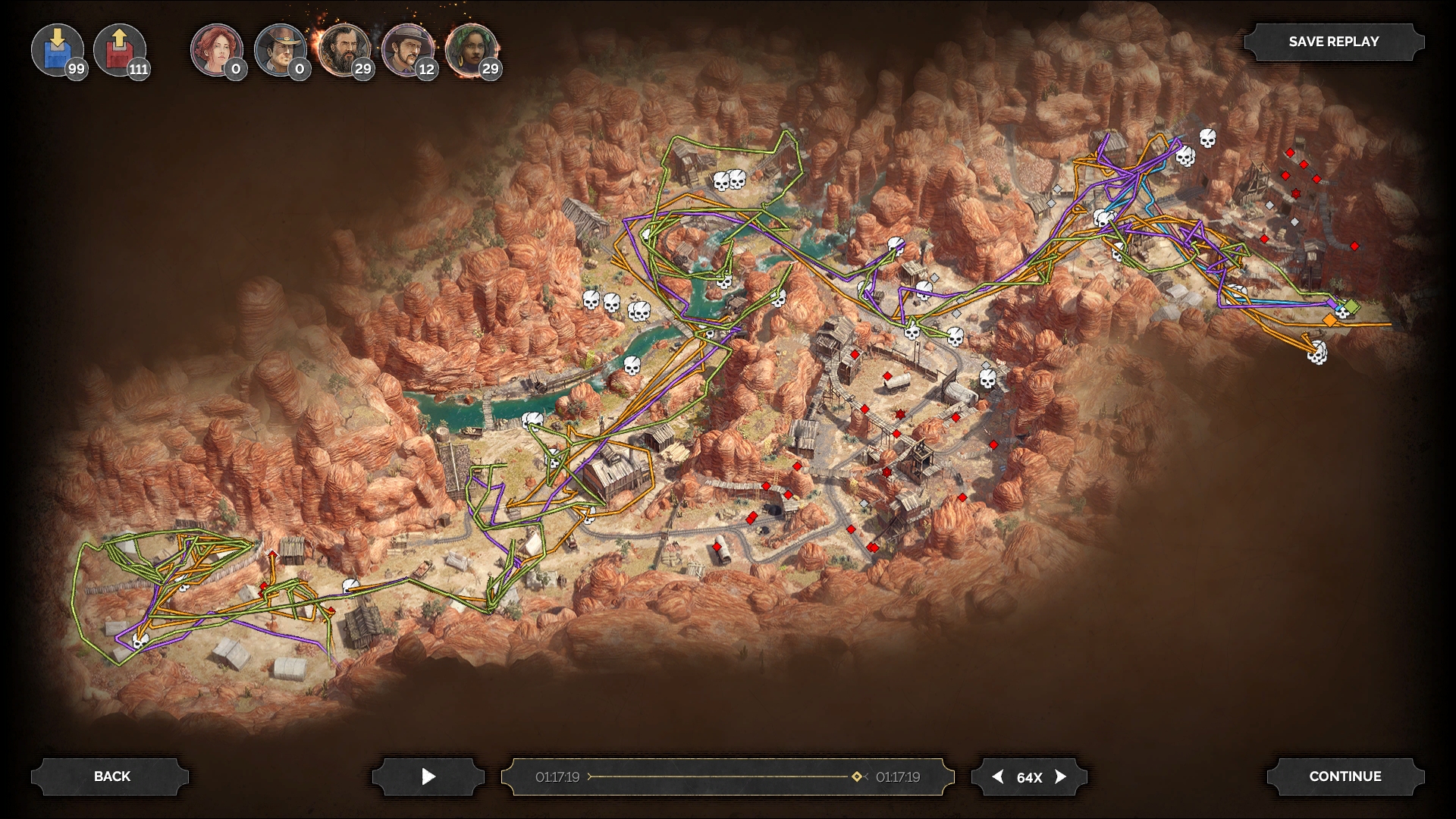 Other novelties like the diagrammatic replays that precede post-mission stat screens, the modelled interiors that feature in some levels, the improved showdown mode (sequencing actions is now possible), and the extensive use of motion-capture for animations, are equally successful. Mimimi's creative judgement is impeccable. Well, almost impeccable. 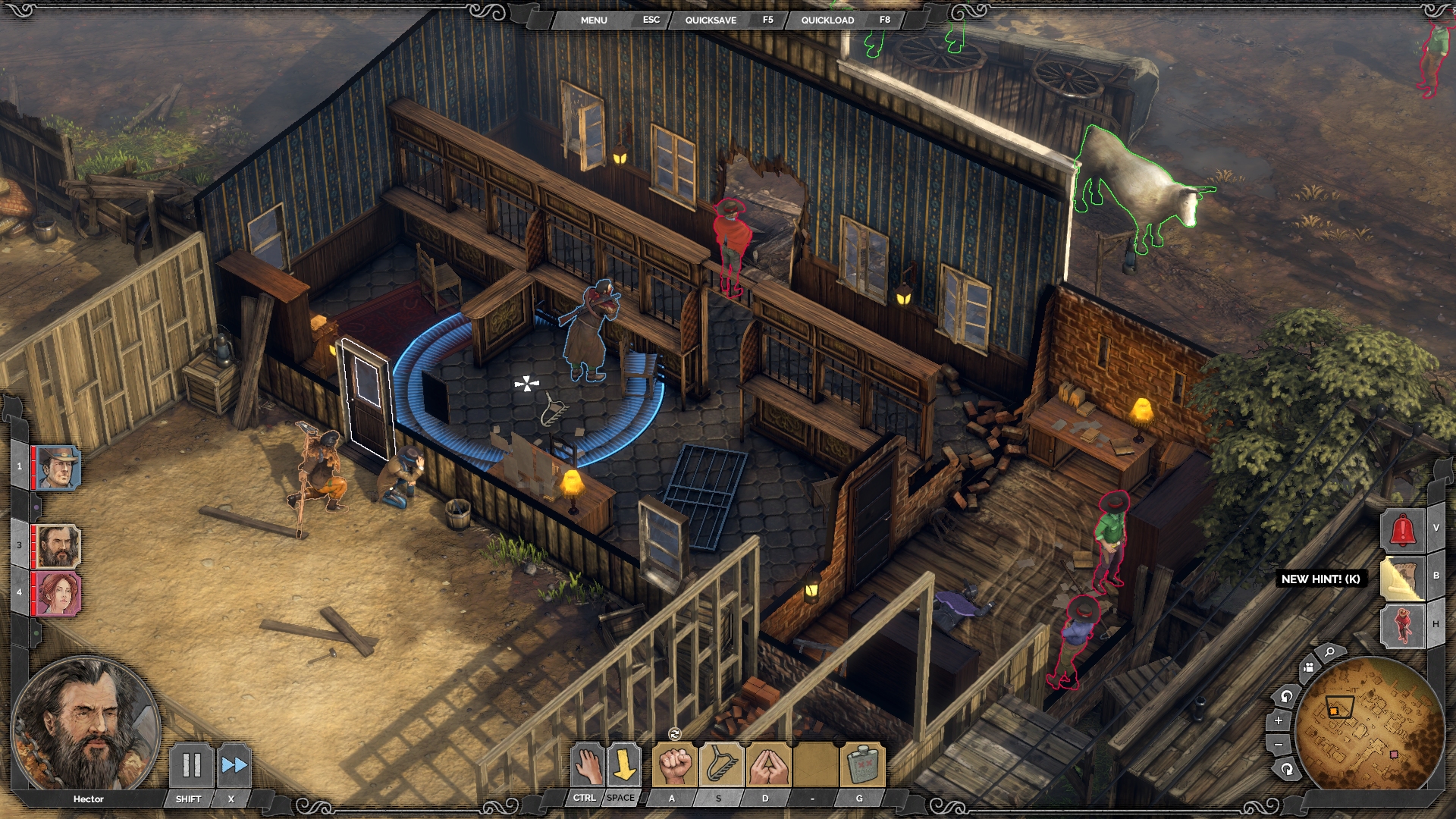 Although the game seems entirely bug free (I've encountered no technical issues at all during my playtest) I'm hoping for at least one patch. Specifically I'd like to see a WYL (Watch Your Language) update arrive in the weeks to come. While I'm not averse to a bit of full-blooded Anglo-Saxon cussing in the right context, I'd argue that the D3 could have done without goons that mutter things like “Focus, you piece of sh*t!”, “What the *uck!”, and “Sneaky mother*uckers!” at regular intervals. The gratuitous swears, which seem confined to certain levels and enemy types, sit awkwardly in a game that eschews grit and realism in other areas, and makes playing within earshot of children potentially problematic. 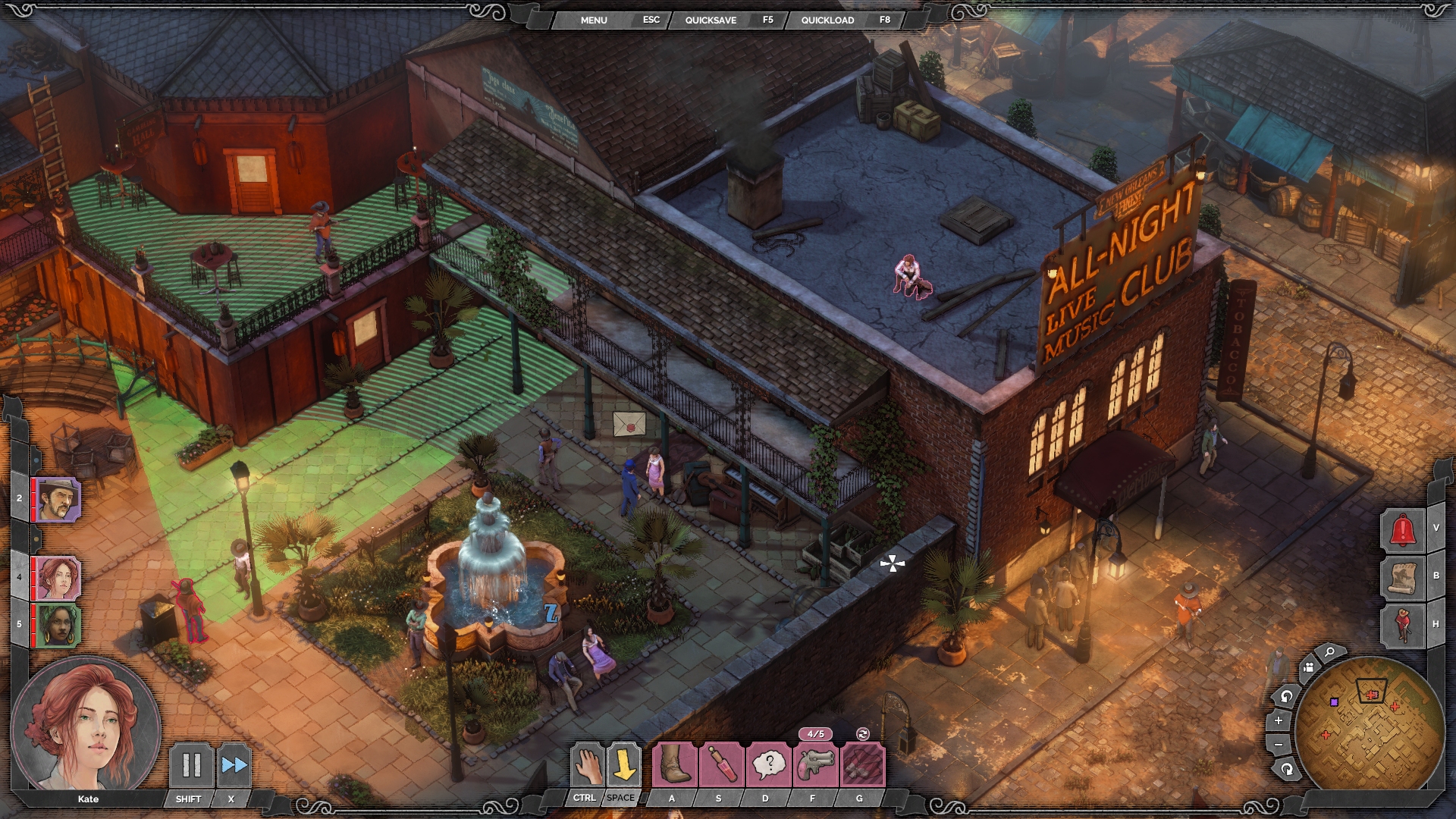 Desperados III may dismay profanophobes and Commandos 4 devs short of confidence, but it's hard to imagine anyone else not warming to it swiftly. I can't wait to see where Mimimi take the engine next. With WW2 spoken for, I've got my blistered quicksave/quickload fingers crossed for Medieval Nottinghamshire.