If you click on a link and make a purchase we may receive a small commission. Read our editorial policy.
Developer: Flashback Games
Publisher: Slitherine
Release: Out now
On: Windows
From: Steam, GOG, Slitherine
Price: £31 to £35 (basic edition)

What do Slitherine's latest piece of hexiana and the coronavirus crisis have in common? They both invite comparisons with WW2, but, on close inspection, bear little resemblance to the 1939-45 conflict. Panzer Corps 2 is as stout as a Sturmtiger and perfectly capable of accelerating clock hands and monopolising cerebra, but loyalty to its predecessors means most of the time it feels more like a tough military puzzle game than an insightful simulation of mid-20th Century warfare. 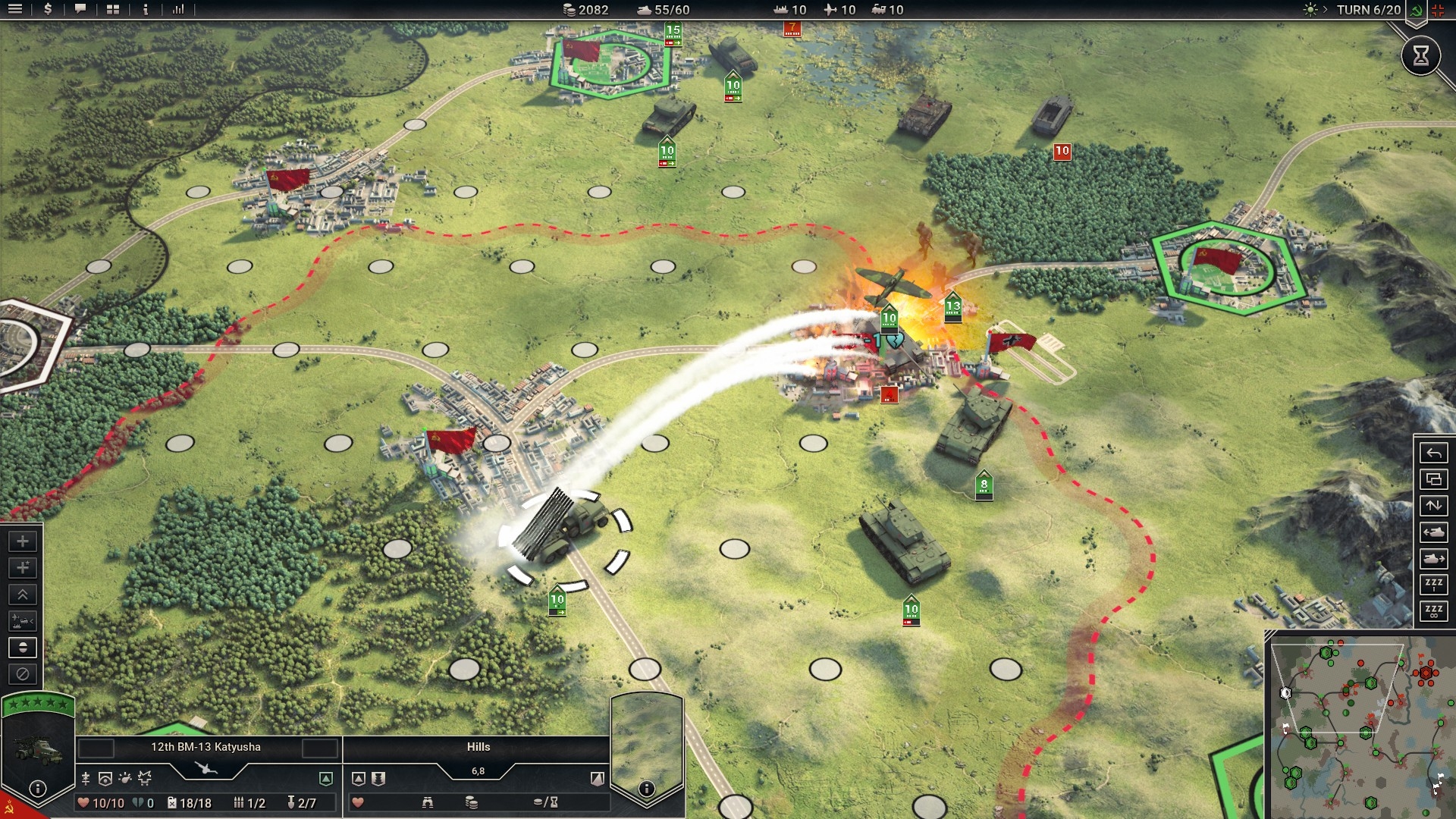 The publisher can trot out its provocative “king of wargames” claim as often as it likes, but that won't alter the fact that Panzer Corps 2 is essentially 23-year-old Panzer General 2 in new togs. Your £31 buys you an approachable, unit-rich wargame that barely acknowledges morale, command and control, and logistics; an approachable, unit-rich wargame that encourages tactics no general of the period would recognise. 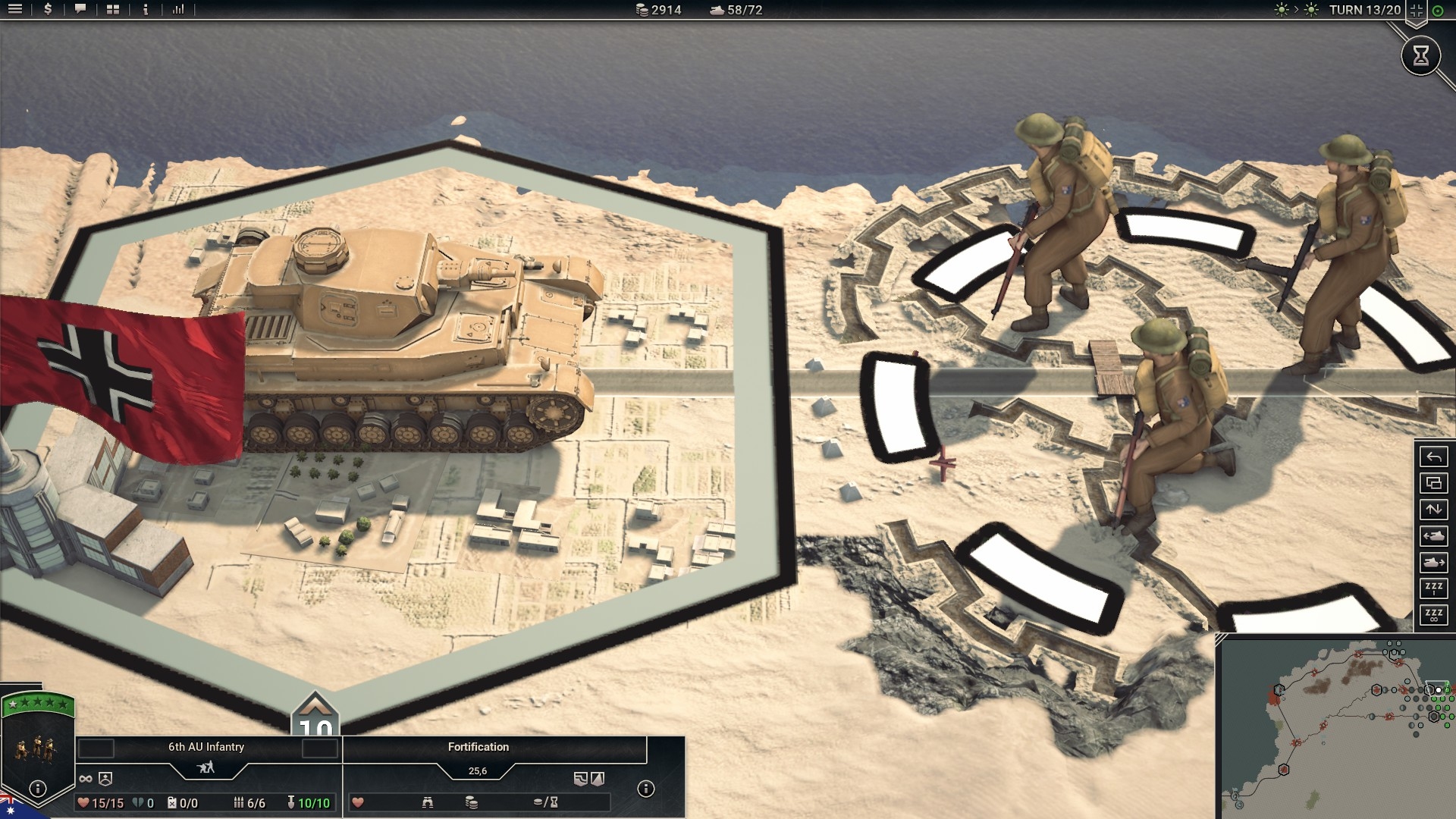 There are tactical truths here, of course. If you treat your tanks as battlefield Swiss Army knives they are going to get blunted PDQ. Infantry thrive in towns and forests while angry houses dominate fields and deserts. Artillery support and air superiority are invaluable everywhere. Crossing rivers under fire is a mug's game. Scouting with infantry-packed trucks, the hallmark of a prize idiot. Tigers > Shermans. Spitfires > Bf 110s. Flammpanzers > scarecrows. More often than not Panzer Corps 2's unit relationships and terrain assertions ring true. 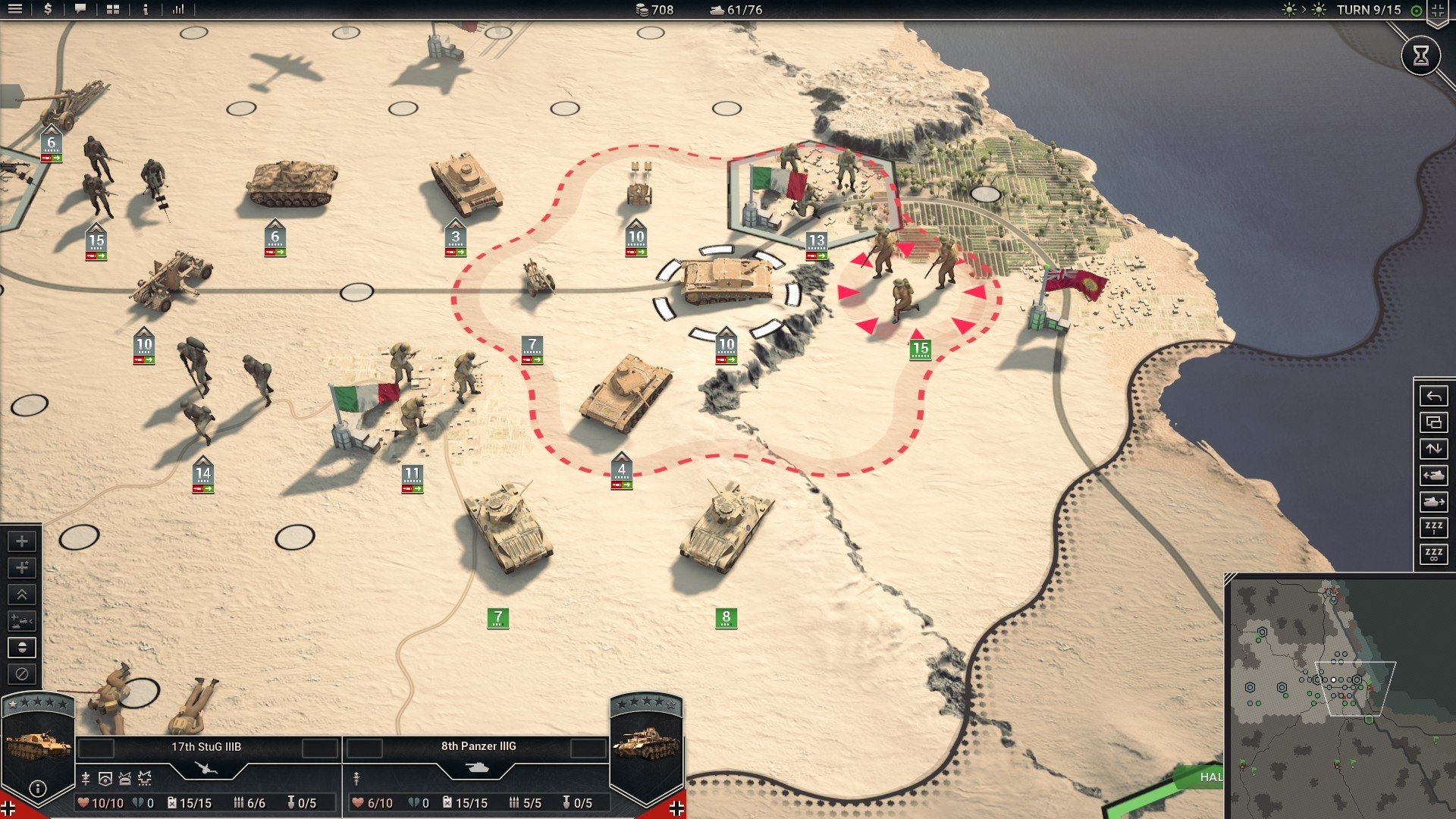 The trouble is, while it's busy saluting history with one hand, it's often flipping it the bird with the other. To win a PzC2 scenario you must grab Prestige*-generating hexagons whenever you can, and think like a Dalek not a Patton or Monty. Because damaged enemy units regain men, materiel, and motivation as quickly as flushed toilets regain limpidity, total extermination tends to drive much of your unit choreography. If I ignore that Cromwell, that Churchill, and those three infantry units this turn, and throw everything I have at that Achilles tank destroyer, I might just be able to reduce it to the magic zero, and thus dispatch it to a Valhalla from which it can never return.

* The currency that buys cannon fodder 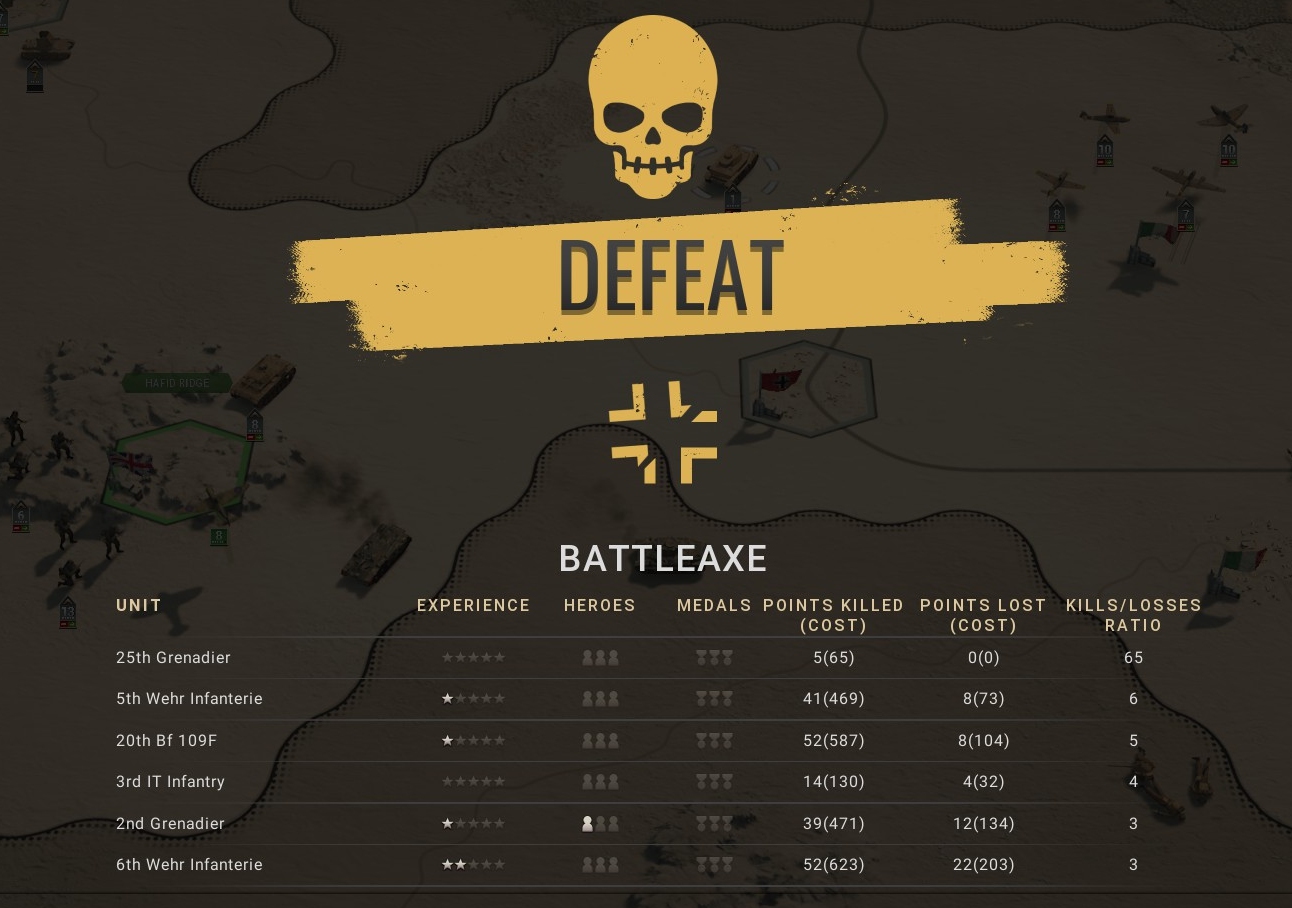 While the amazing regenerative powers of enemies turns you into a merciless, single-minded liquidator, the devs' unnecessarily inflexible approach to turn limits* and victory conditions transforms you into an anxious clock-watcher. In the generously proportioned multi-path campaign there's no such thing as a marginal victory or a draw, there are only victories and defeats, and the latter mean instant dismissal. Fail to take every one of the assigned victory hexes within the turn allowance and, assuming you reject the “replay mission” offer, the metaphorical equivalent of a size 13 jackboot up the jacksy kicks you straight back to the main menu. Utterly vanquished the foe, and seized eleven of twelve VLs? Hard käse, kamerad - PzC2 doesn't give a Ratte's arse. 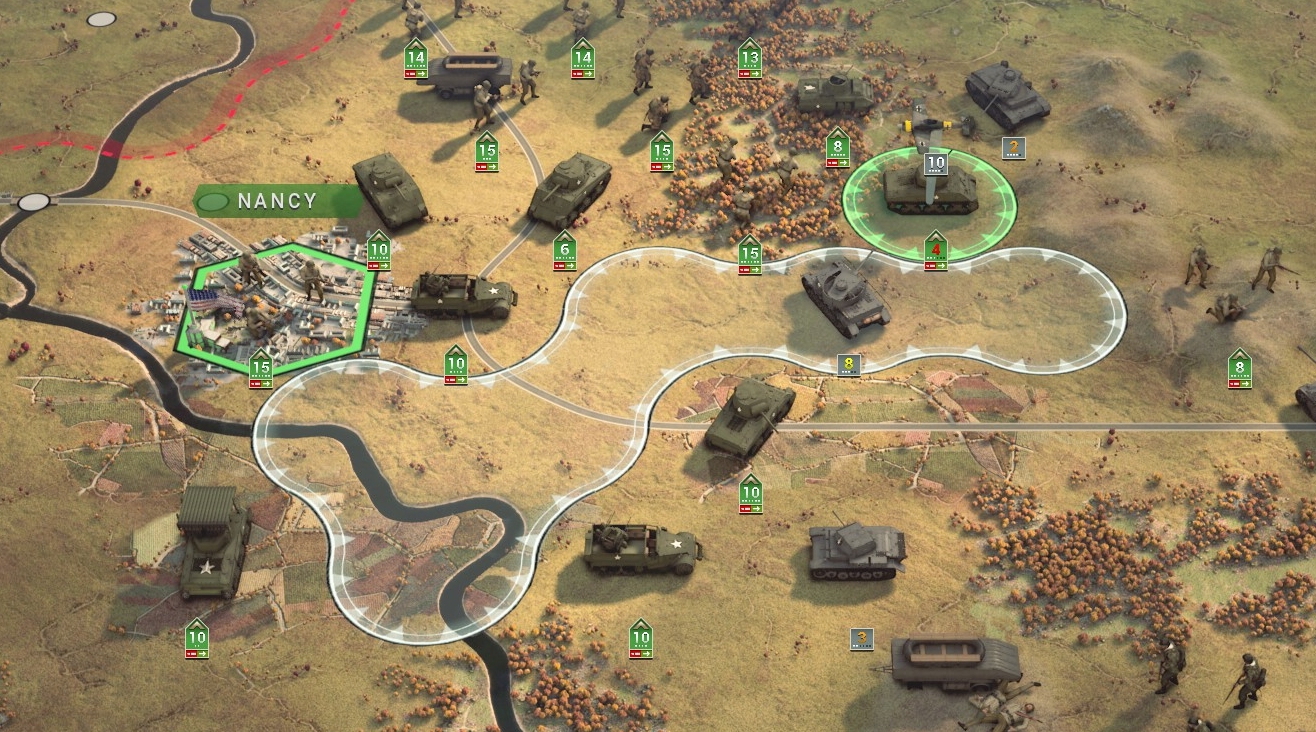 A new encirclement mechanic gamely attempts to address Panzer General's long-standing logistical crudity. Now if a unit can't trace an uninterrupted* hex path to a map edge or specially designated city, then it's considered cut-off and will slowly accrue performance penalties and be unable to reinforce. It sounds promising on paper but too often in practise it results in bizarre situations like the one pictured above. Unlikely pockets and weird multiple encirclements abound. It doesn't help that units don't seem to care which map edge they draw their imaginary supplies from. Cocksure blitzkriegers that end up in an adversary's thinly-populated rear run no risk of isolation as there's usually little between them and the peripheral hexes ahead. 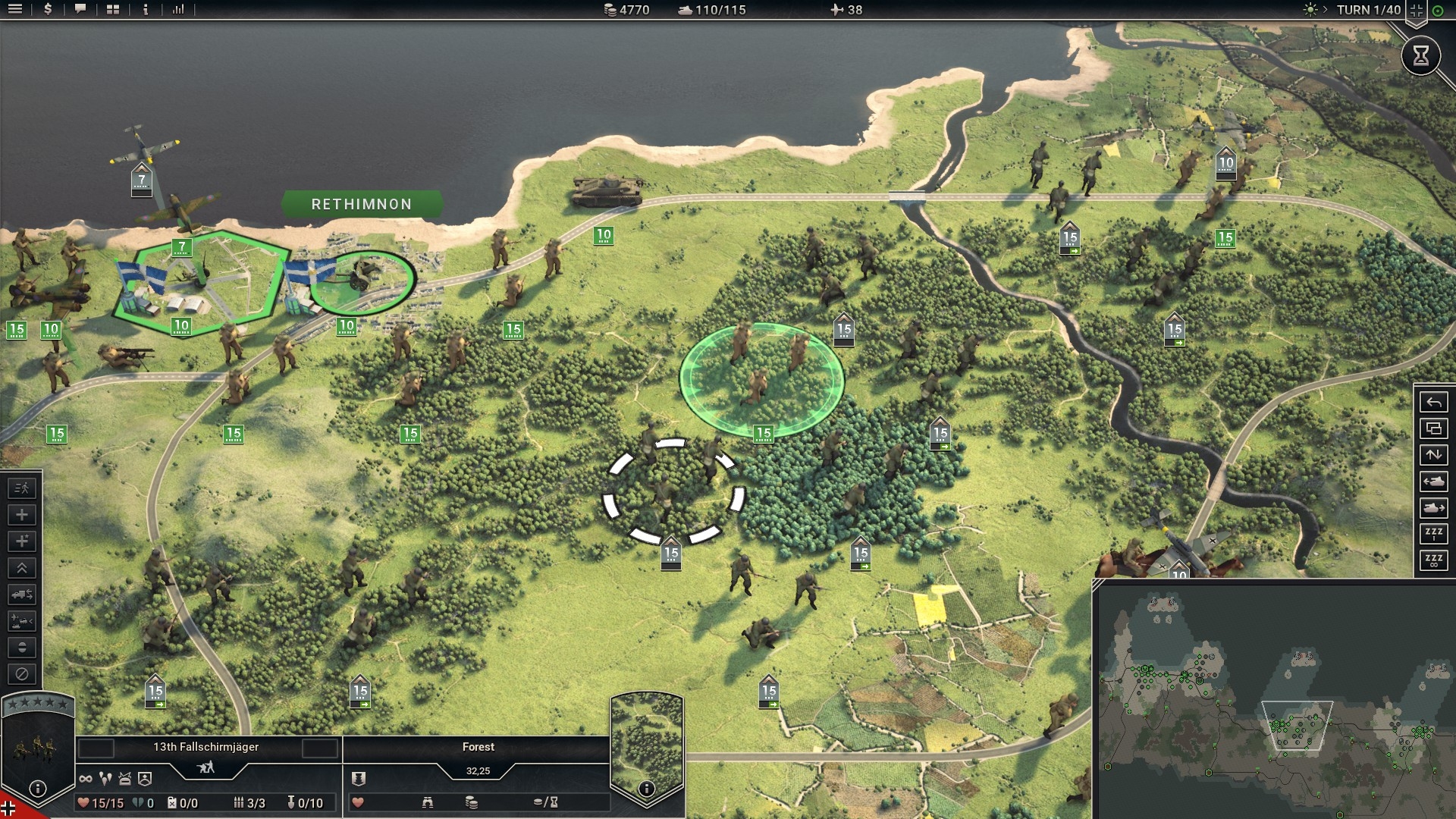 Like the encirclements, the switch from sprites to polygons isn't an unqualified success. Yes, the new customisable 3D miniatures will charm the socks off anyone who has ever assembled an AFV plastic kit or toppled a toy soldier, but because the hexes they occupy are sometimes similarly hued and extremely busy visually speaking, warrior representations have a nasty habit of melting into their backgrounds. Infantry and guns in forests, and aircraft just about anywhere can be particularly hard to discern – a situation not helped by small, inconspicuous unit icons and lingering wrecks. PG2 and its 3D follow-up got around this problem with tonal and detail contrast. 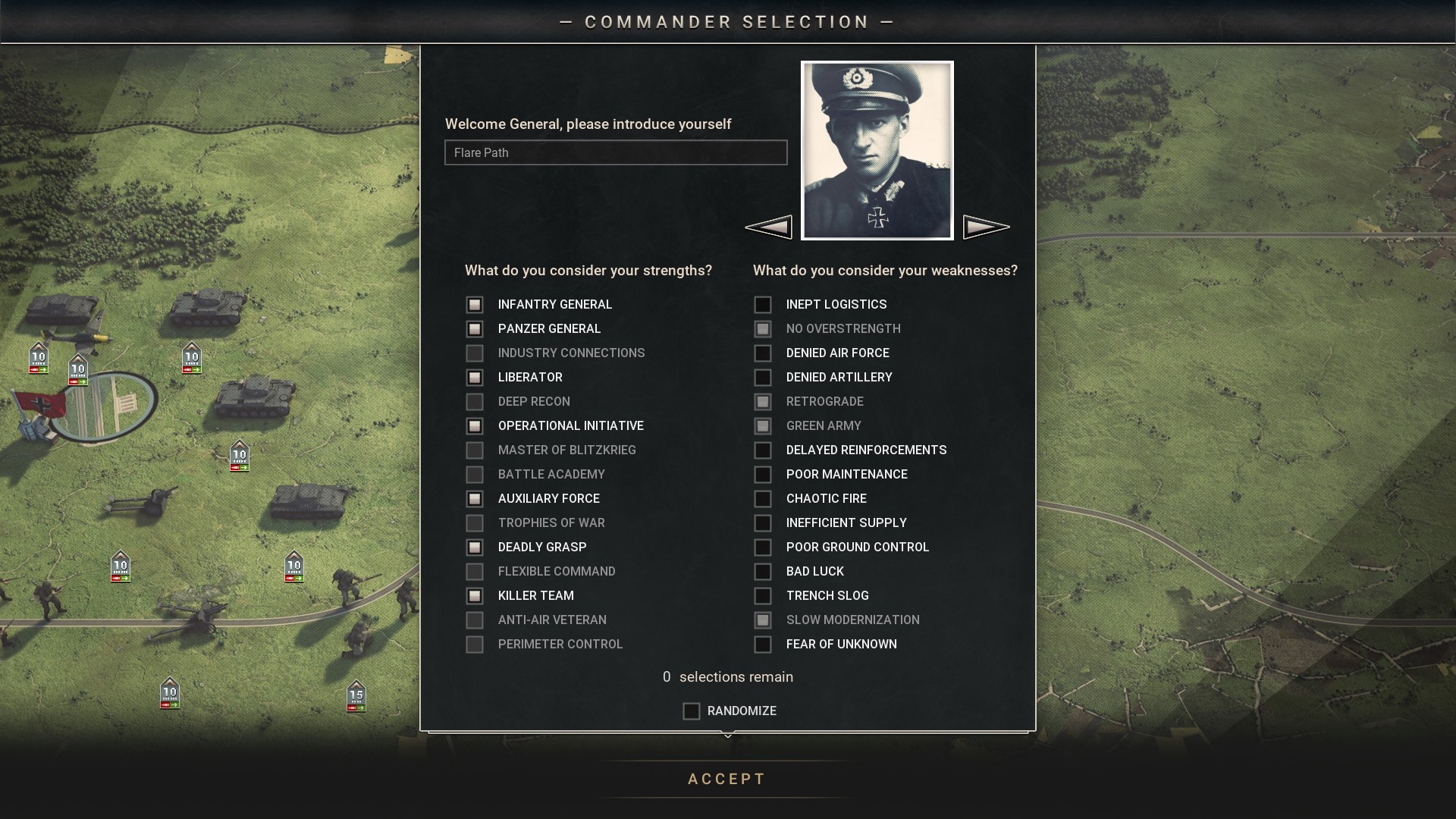 I can't imagine many Panzer General veterans resenting changes like the tooltip-explained character customisation screen that greets you every time you begin a campaign, or the way in which heroes have been made more colourful and flexible. 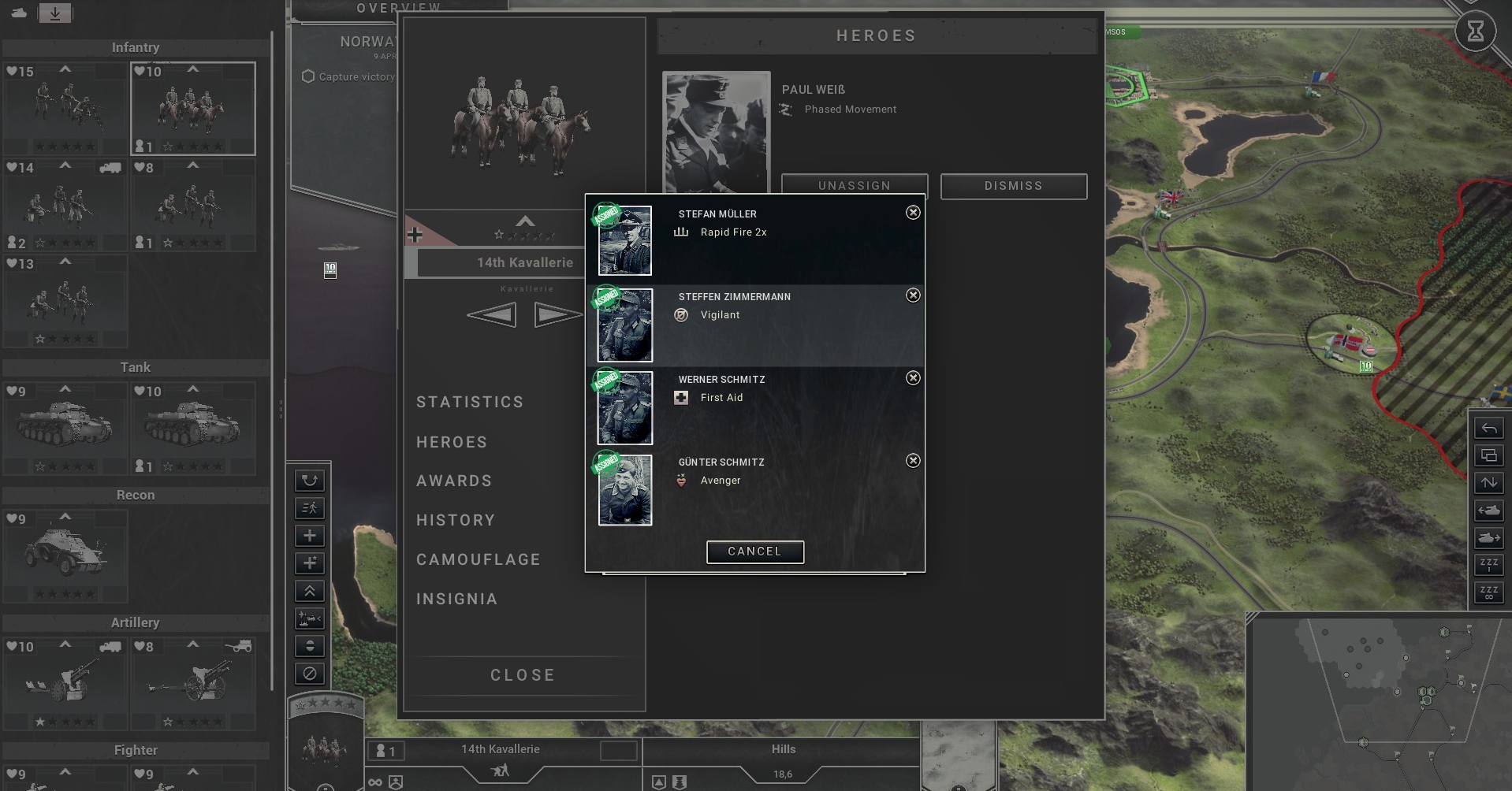 Now transferable between units, the named bravehearts that accompany your core force, are no longer simple stat buffers. Traits like Avenger (attack bonus for each point of lost strength), Pathfinder (difficult terrain treated as clear), and Liberator (double prestige for all captured flags) give them a modicum of personality, and encourage thoughtful tasking. Inventive users have discovered ways to turn units into unstoppable juggernauts with multiple heroes and awards (ability-boosting medals earned in combat). Early patches will reveal whether these balance-wrecking combos were developmental oversights or Flashback's way of tenderising tough late-game scenarios. 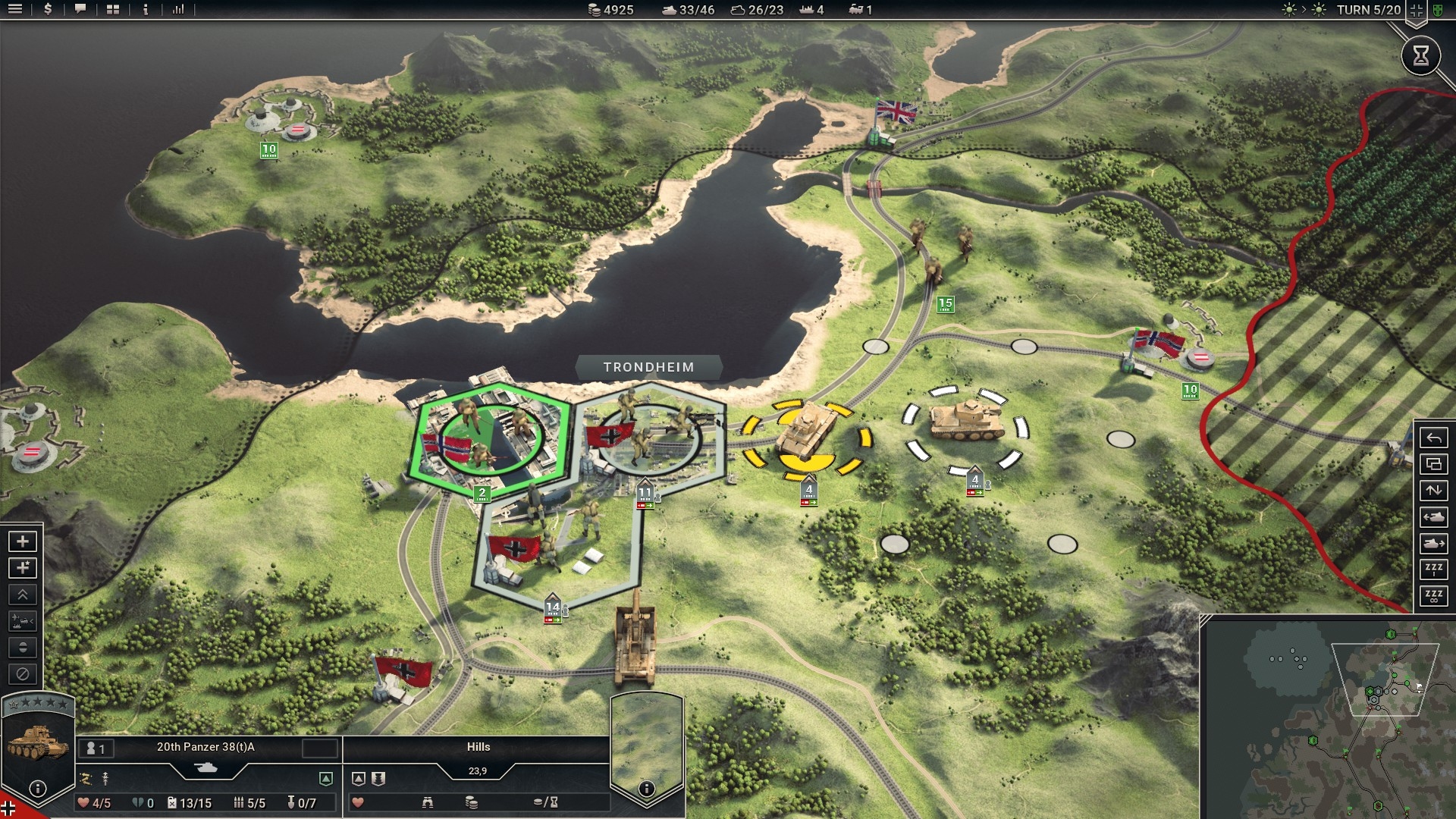 Other innovations like the new approach to core force slots (packing your persistent army with top-of-the-line Panzers is no longer possible as AFVs like the King Tiger now occupy multiple slots), the ability to split units, switch unit positions, and perform multiple attacks in a single turn (PG2's overruns are back) also enrich without over-complicating. Aircraft that automatically return to their bases at the end of a turn, recon units that bestow combat bonuses to adjacent battlers, automatic counter-battery fire... there are sensible tweaks everywhere. 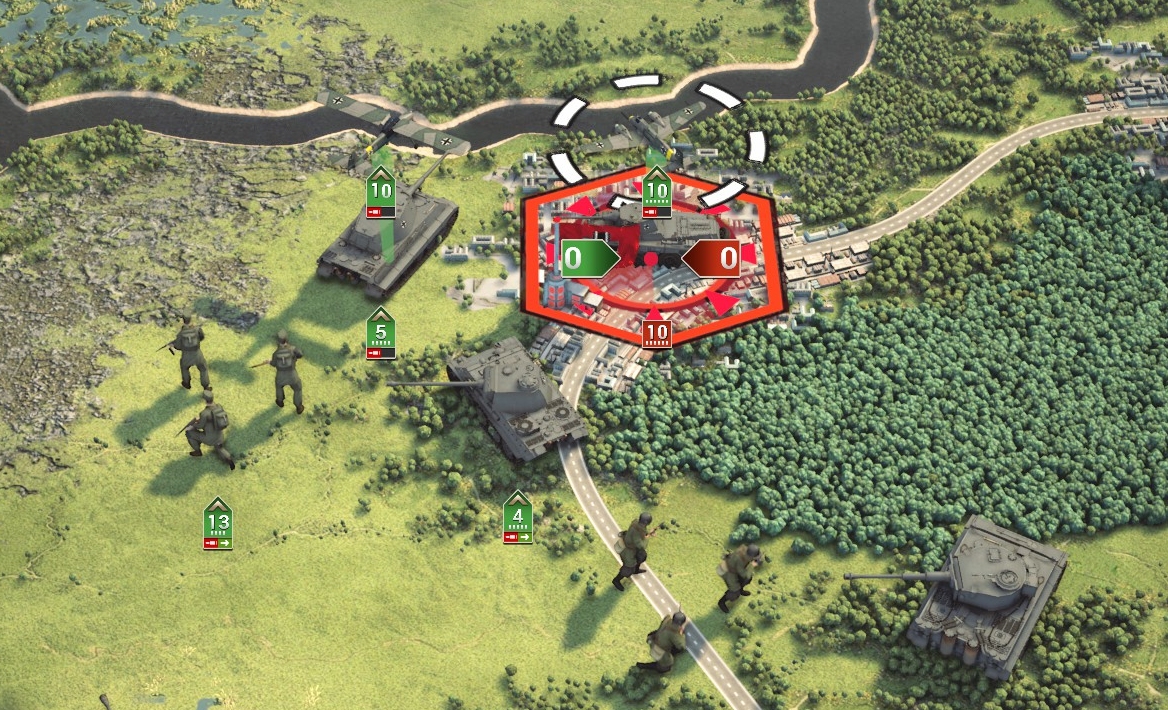 Perhaps Flashback Games obsession with play mechanics tinkering explains why multiplayer and the new random map skirmish mode feel so half-baked. The former is bugged and short of scenarios. Lacking mod cons like the ability to set victory conditions and choose your opponent's nationality (sometimes, as above, you find yourself facing fellow countrymen), the latter currently only serves to draw attention to the inadequacies of a familiar/mediocre AI. Even if the skirmish opponent occasionally fielded aircraft and bought reinforcements (it does neither at present), it would, I suspect, prove a pushover. 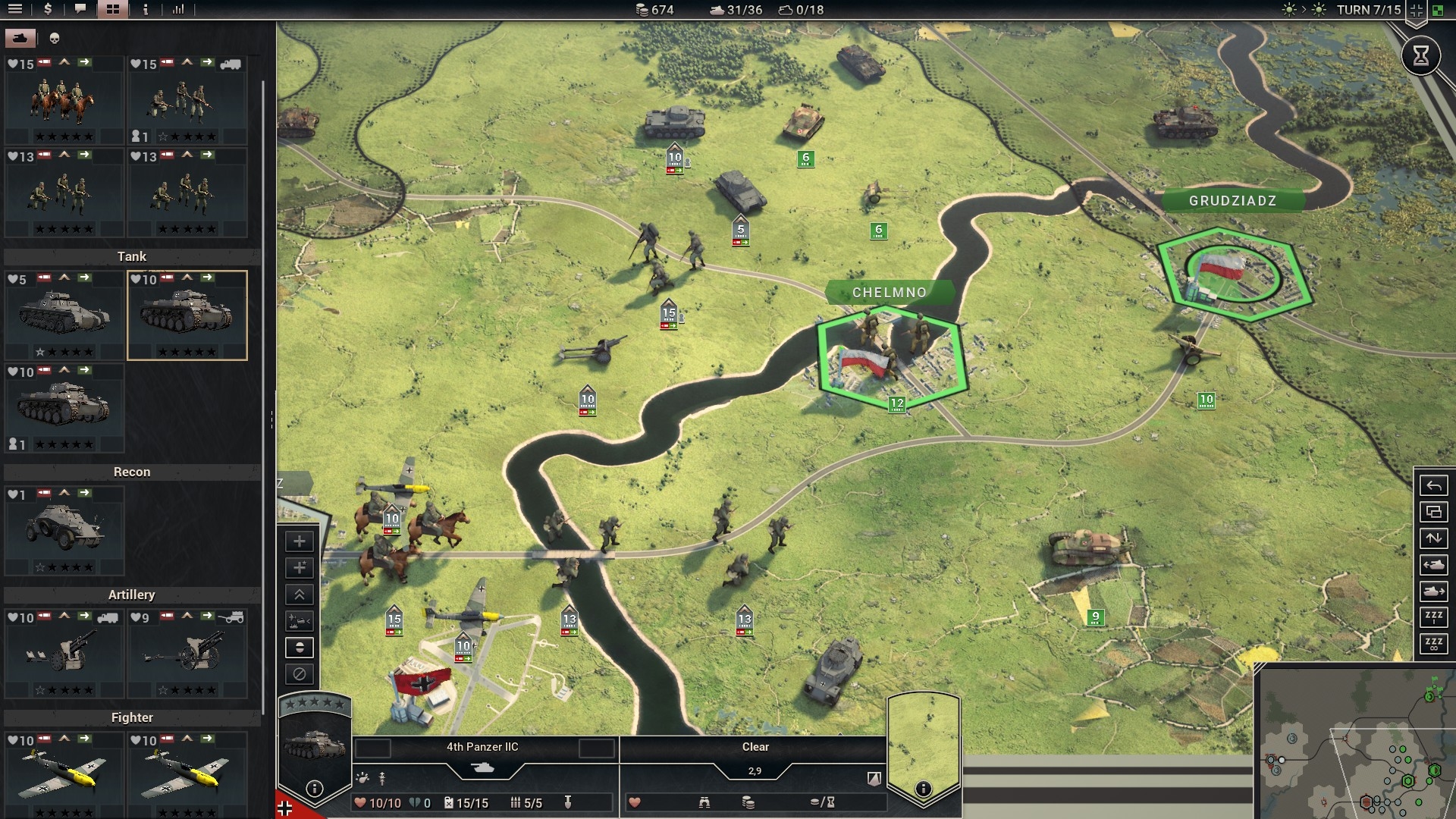 PzC2's artificial adversaries need assistance from map and scenario designers in order to be competitive, and they get plenty of both in the campaign. Played solely from a German perspective and with five possible entry points (Poland, Barbarossa, North Africa, Italy and Kursk) the sequence consists of 60 scenarios, roughly a third of which are encounterable in a single full-length playthrough. Surprisingly leathery, the campaign feels like it's been balanced for and by seasoned PzC players. If you're new to the genre, don't expect to play at the default/middle difficulty settings and get very far. A more thoughtful dev would have allowed the odd slip-up, and made some or all of the scenarios available as standalone battles too. There are just eight files in the single scrap folder at present. 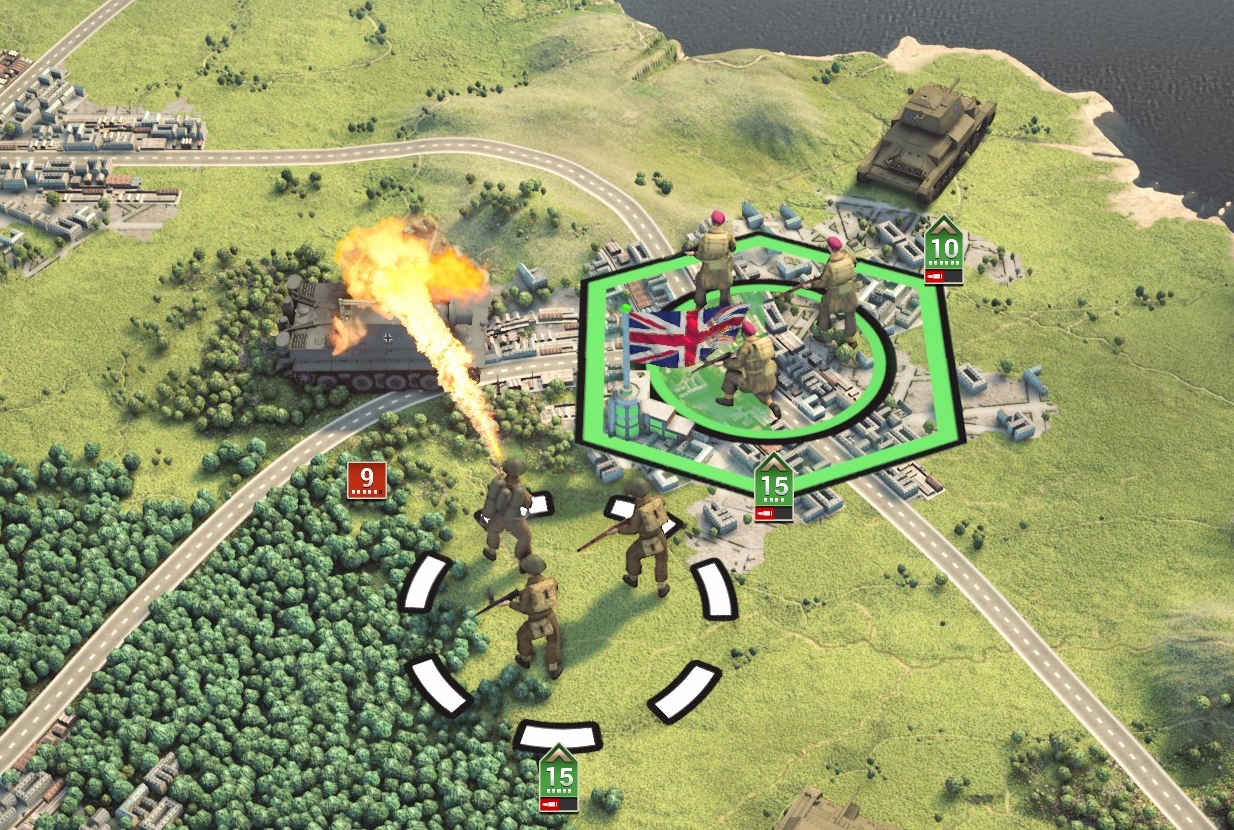 As this mission tree makes clear, the campaign mirrors those of past Panzer Generals and Panzer General-likes. If, like me, you were hoping for treatments of some of the Wehrmacht's lesser known ops, or an Allied sideshow or two, the arch conservatism may rankle. Although the coming mountain of DLC will, no doubt, fill many gaps, a fresher campaign in the base game would have helped keep novelty-hungry old timers like myself keen. 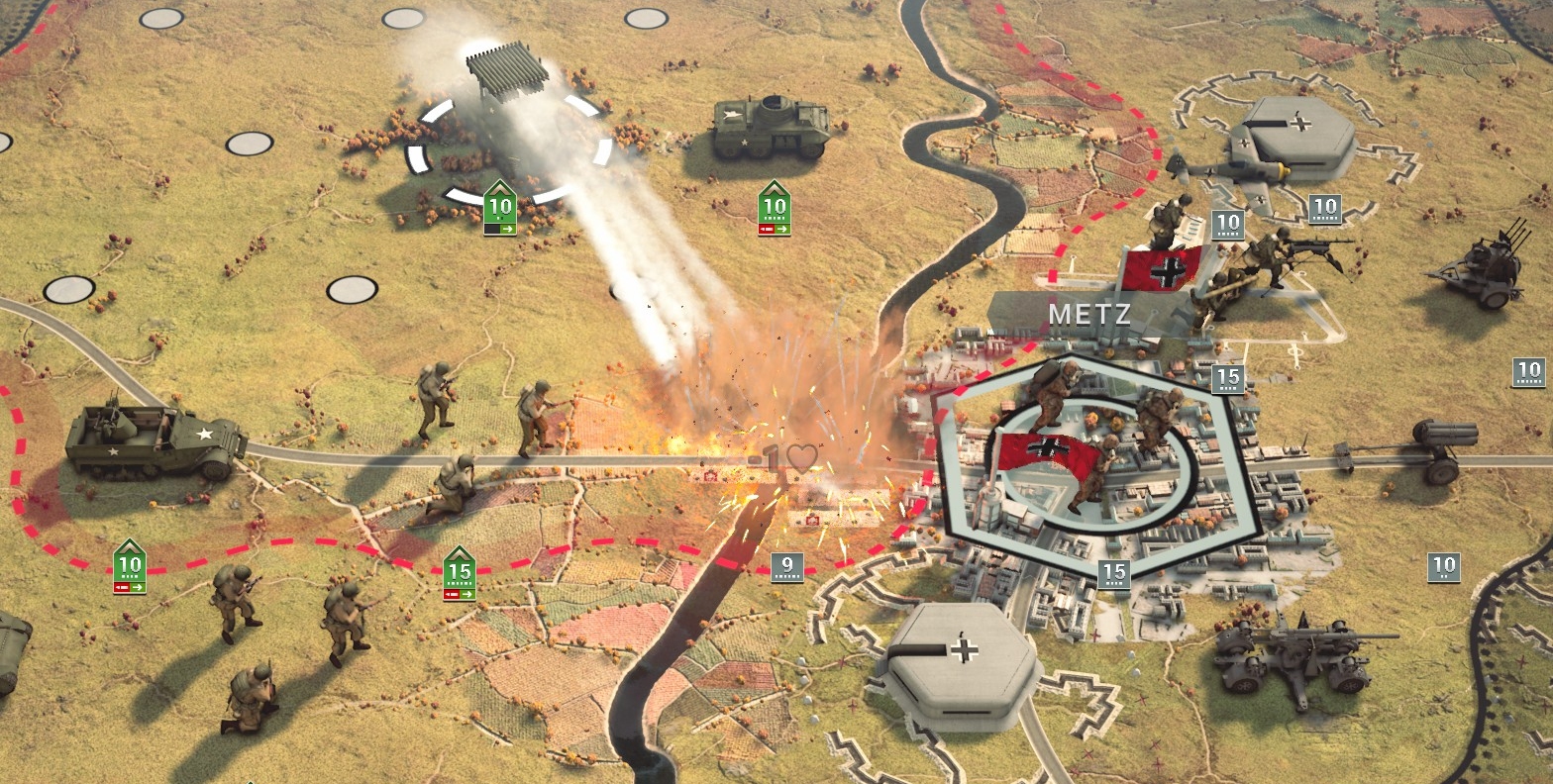 As things stand, the combination of tired settings, unforgiving victory conditions, and hard-on-the-peepers visuals, is sapping my enthusiasm for the self-styled “king of wargames”. Several times during the past week I've become so absorbed in scenarios that entire mornings or afternoons have passed without a single “I hope X is okay” and “I wonder if Sainsburys at Y has any rice or flour?”-type thoughts, but absorption isn't quite the same thing as enjoyment or admiration. Panzer Corps 2 is a wargame incapable of producing high drama and unscripted surprises. It distracts efficiently enough but never makes me feel like a general. In a world awash with equally entertaining PG clones, and cleverer, more novel wargames that work far harder to illuminate WW2, its chances of being on my HD this time next week are... 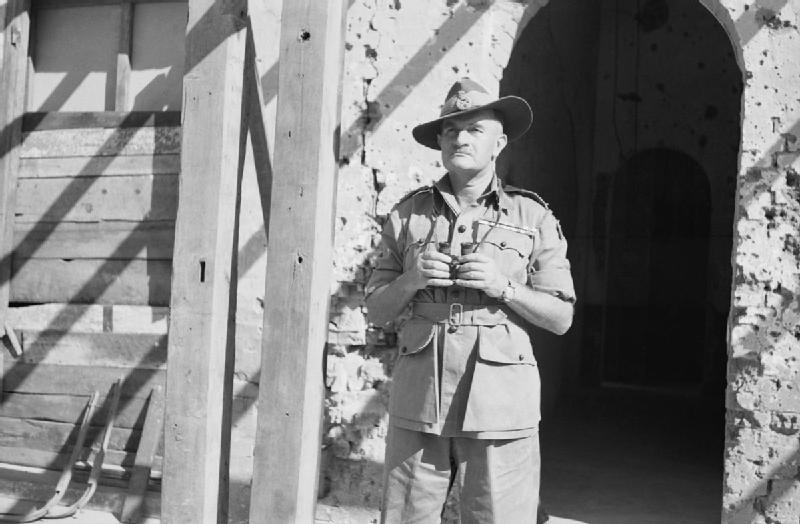