My rotten sloop is wheezing into port, the decks slick with blubber and blood, and still it isn't enough. The sea teems with life and before this day is done, I swear I will silence all of it. From our home port to the distant shores of Europe and Africa, the water will run red.

This is Nantucket, a strategic-RPG about the golden age of whaling. I'm hunting for Moby Dick but it's a long voyage from lowly captain to vengeance and fate personified. Mostly, my time is spent stabbing tiny baby whales until they turn into piles of money and food.

To help me in my quest to vanquish the all-destroying but unconquering whale, I'm going to bring my friends from the band Mastodon into the room. Let's see how their version of events, as told in the song Blood & Thunder from Moby Dick concept album Leviathan, matches with my experiences.

Here we have an immediate problem. As is their wont, Mastodon have gone off and done their own thing instead of following instructions. I explicitly told them to give me some feedback about the game Nantucket but judging by these lyrics I can only imagine they've picked up the wrong top-down ship-based management game. I'd bet you anything they've been playing Sunless Sea.

Moby Dick is a story about monomania though and the desperate ends to which it can lead. It's about a lot of things but obsession is certainly one of them. While I didn't expect Nantucket to go all in on sanity tests and the sort of sticky situations that Sunless Sea excels at, I do wish Moby Dick had more of a presence, as a metaphor or as an actual monster.

Instead, there's a fairly standard structure, as far as this type of game goes. You start small, with a rubbish ship and a small, inexperienced crew, and you rise through the ranks, gaining prestige by completing delivery missions and finding new hunting grounds. As you and your crew level up, you can take on larger prey, and the resources gained from that prey allow you to buy bigger, stronger ships, and then you're on the treadmill toward a boss-fight with the biggest fish (mammal, yes, but I'm sticking with the language of the time).

It's too repetitive for my tastes, especially in the early stages when the range of jobs you can undertake is limited by your low prestige and the crappiness of your ship. I spent a lot of time just off the Eastern Coast, near Cape Cod, killing newborn narwhales for tiny amounts of blubbery loot.

I was being driven to distraction rather than to maniacal voyages into the maelstrom of my own fears and anxieties. 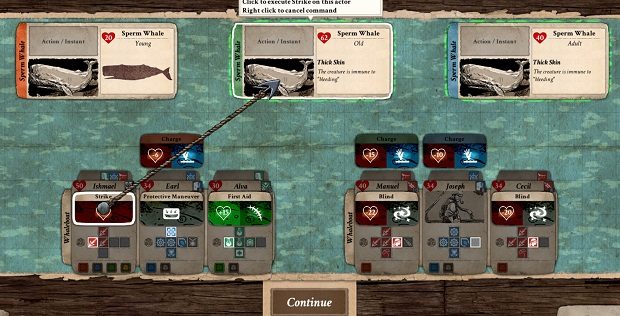 Oh, Mastodon. Either you really haven't been playing this game at all or you're far better at it than I am.

Men of the flesh have stopped me several times. Pirates, specifically, looking to steal my haul of blubber no doubt. They might be after my money as well but they're going to be sorely disappointed. I only ever keep enough around to buy the bare minimum of supplies (food, water, liquor, wood) for each journey. 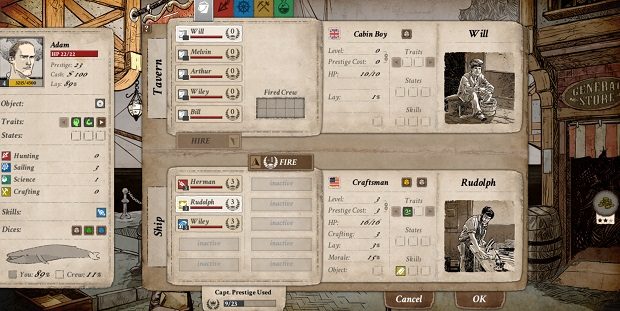 Pirates aren't the gravest threat in the game – that'd be the whales, rum-deficits and poverty – but they do offer a change of pace from the sometimes tedious labour of whaling.

Combat is built around a combination of dice, character skills and randomised weather effects. Until you're facing off against the larger monstrosities of the sea (all the while keeping in mind that you are quite possibly a monster yourself), each battle is quite short. Killing a small whale only takes one harpoon strike and you won't even need some of the nastier abilities until you're confronting larger prey.

Abilities that allow you to tether yourself to a whale with hooks while you bleed it to death, for example. That kind of thing. 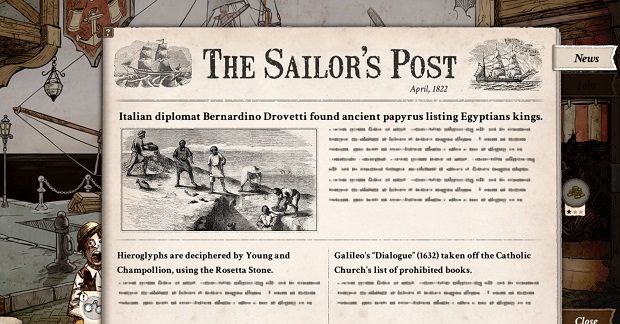 When an encounter begins, you choose members of your crew to hop into whaling boats and then the creature(s) play a token, telling you what they will do. Usually they're going to spear someone or smash them or knock them overboard.

Depending on their skills, which are selected from several classes including hunter and scientist, crew members can choose which of several dice to roll. The more experience they have, the more faces of the die are useful. A successful roll might heal an ally, lob a harpoon or evade an attack.

It's simple but enjoyable, and gives a real sense of progression when a character goes from expendable to essential. Unfortunately, you'll be doing very similar fights over and over again, in a way that might make you think you're playing a JRPG with random battles. You can automate them but one time I tried that and my best navigator got killed by a baby whale, something that had never happened when I took control myself. 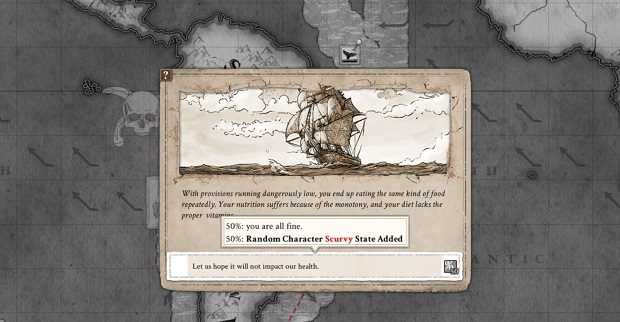 Returning to a previous point, the “remorseless emperor” that commands me as I play Nantucket is thirst and hunger and greed. A three-headed emperor. Sure, I want to find Moby Dick and settle that score, but really I'm just pottering about doing a job of work. And you know what? The longer I spend at sea working, the more I start to enjoy the job. It is repetitive, but less so now that we've upgraded our ship and can go hunting for beasties that have sent other sailors to a watery grave.

The flow of Nantucket is very odd. It begins, for narrative reasons, in the midst of a storm, all drama and chaos, and then strips everything back so that you spend the first few hours becalmed, waiting for something to happen.

All in good time.

They do split their lungs, the men. Or at least they belt out shanties every now and again as you sail around the map. It's a lovely touch.

Nantucket is full of lovely touches actually. The map is a splendid thing, though it doesn't have as many ports as I hoped it might, and the engraving-style images that accompany the little multiple choice moments that occur during voyages are fantastic.

The actual decision-making is great too. Depending on the traits of your captain and crew, various things can happen out at sea, and usually you can react in various ways. You're always shown the possible consequences, as percentages, so you're not going to end up with a bunch of mutineers forcing you down the plank because you refuse to share your grog. There's always fair warning.

As well as shuffling around traits and providing cash or morale-boosting incentives, these choices give character to your crew and break up the monotony of whaling. And like the whaling itself, they become more involved as the game progresses.

Sid Meier's Pirates! Is the closest thing to Nantucket that I've played. Both games involve moving from port to port trying to gather riches. Both have you dividing your takings among your crew. Both have an open-ended nature and can sometimes lack focus.

Nantucket should be held together by the hunt for Moby Dick, that desire to look the beast straight in the eye, but I've found it to be more like a version of Pirates with less mini-games and less possibilities. Despite that, I've found myself going back to it even as I was writing this review. Not to check facts and not out of any urge to prise a second opinion out of myself; I was playing because it has got its hooks and harpoons into me.

Even though being a whaler boils down into fairly basic and repetitive actions, there's a texture to Nantucket that I appreciate. It's a fine place to spend time, even if a lot of that time is spent against the grindstone. And the more I play, the more there is to do and see, I just wish it cut to the chase much more quickly.

It is, in fact, a perfect game to play in the background while listening to podcasts. Or perhaps while listening to the audiobook of Moby Dick, and add The North Water and Jamrach's Menagerie to your whaling horror reading/listening lists as well, if you've got the stomach for them.

Reader, I harried him. I harried him from one corner of the world to the next, and I spent all of my coin on a ship grand enough to slay him once and for all.

But I have not slain the great white whale, and I fear I never will.

Nantucket is available for Windows via Steam and costs £13.99.