Half Moby Dick, half Sunless Sea, Nantucket sweats Nineteenth Century nautical drama the way the Charles W. Morgan to this very day sweats Nineteenth Century whale oil. Picaresque's failure to recreate whaling's most telling/pathetic scenes (The hopeless marguerite... the confused calf following the whaleship that slaughtered its mother...) worries me, but not sufficiently to cause a rift. I'm in for the long haul. Unlike some of the Flare Path readers who, last Friday, volunteered to crew my 'new' barque.

(Warning. The following contains the odd side quest spoiler and descriptions of cetacean/sailor slaying.)

It was a balmy, blossom-scented day in early May, 1828, when the festering Flora's adventures began. Keen to get acquainted with a new vessel and crew, I decided that blubber hunting could wait for a week or two, and set a course for nearby New Brunswick rather than the lucrative cetacean-sprinkled seas girdling Greenland. The previous year whilest waiting for the wind in Hawaii I'd agreed to help a chieftain retrieve a sacred spear. The fellow said to be in possession of the weapon was reported to be trading furs in Bathurst, a settlement at the mouth of the Nepisiguit river.

During our leisurely passage north, I had ample opportunity to size-up my ten shipmates. For the most part I liked what I saw. My boatswain, Shiloh, had been at sea for nigh-on thirty years and was on good terms with every chandler and oil buyer from Peterhead to Pondicherry. Stugle, one of the Flora's two carpenters, was a man of similar experience. A sea dog as happy with a meat cleaver or blubber spade in his hand as a hatchet or saw, he and fellow chippy Canadave (a landsick woodsman with an infectious laugh) were soon as thick as thieves.

The senior of my trio of harponeers, Mr Gity, had stuck whales in all but one of the Seven Seas. Off Dartmouth we took to the boats for some sport and he pricked more barrels than anyone, including myself. The exercise proved Rorschach and Jabbywocky could hurl a blubber bolt with precision too. 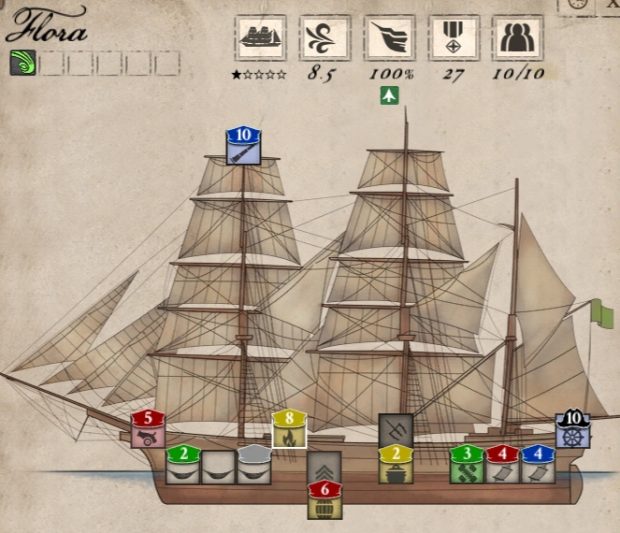 The Flora carried two medical men, Faldrath and Velko, both of whom had served on whalers before and had seen what a threshing fluke and a falling spar could do to human flesh and bone. I prayed their Lilliputian lances and swords would remain in their morocco cases until we returned to Nantucket yet knew in my heart that this was unlikely.

Faldrath's first patient was Gothnak. For the first three days of our voyage, Shiloh's understudy could keep nothing down, not even grog. A strange affliction for a man who had rounded the Horn twice and could manoeuvre a whaleboat as deftly as anyone I've sailed with! 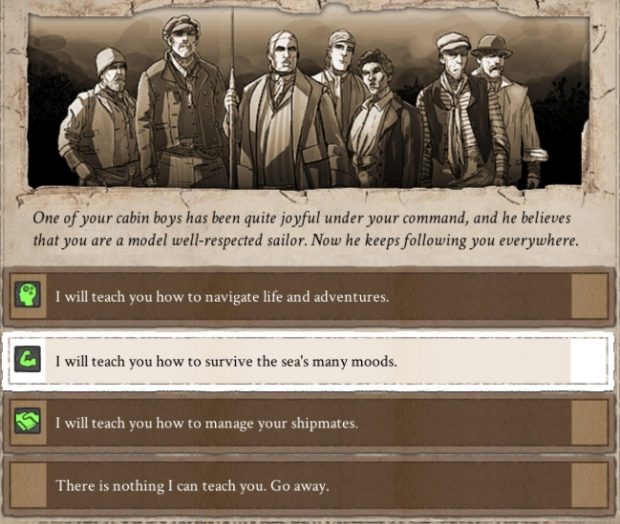 Although cabin boy Rutiger was, by a country mile, the greenest amongst us, he made up for his inexperience with boundless enthusiasm. On the way to Bathurst he took to following me around like a faithful dog and I rewarded this constancy by tutoring him in the ways of the sea when opportunities arose. 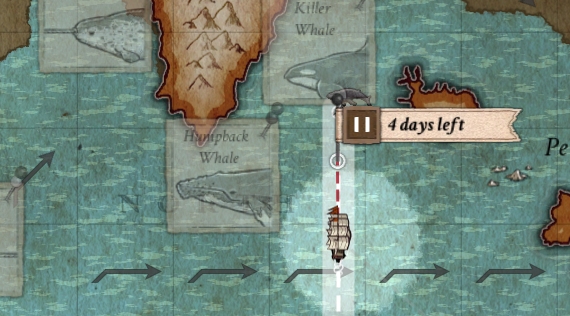 We left Bathurst without Kahekilli's spear but with information on its probable whereabouts (The fur trader had gifted it to a Brazilian prince several years earlier). Although eager to reclaim the weapon, the ship's ledger and my new companions craved blubber so it was to the north-east not the south that we sailed.

Two weeks later, in jade-green waters off Greenland, Gothnak brought our shakedown cruise to an abrupt end with a hoarse 'Thar she blows!' bawled from an icicle-fringed crow's nest.

The humpback's playful habits have earned it the nickname "the merry whale” but there was nothing merry about the three beasts we battled on that chilly June morn. Strikes from Mr Gity and Jabbywocky put fire in the chimneys of the two smaller animals soon enough, but the biggest foe had a hide like steel and a tail with a mind of its own.

As our boats closed searching for angles, Shiloh was knocked senseless and unlucky Gothnak pulped by a particularly vicious pendicular tail slap. I grabbed the tiller so Velko could aid his groaning shipmate, but was unable to prevent a second impact. This one bowled the crouching semi-conscious Gothnak over the side. Wreathed in bubbles, he sank like a stone. The younger crewmen froze, staring at the spot like gorgon victims until shouts and punches brought them to their senses.

Of all the lessons I learned from Oily Bob, the first skipper I served under, persistence has, up until now, proved the most useful. In the wake of Gothnak's death, spirits on the Flora were in the bilge. Some wanted to harvest our prizes and turn for Horta immediately. I drove these weevil thoughts from heads with barked orders and talk of faint hearts and increased lays. The decks were slick with blood, the trying pots bubbling furiously, when another archipelago of leviathans hove into view to windward.

If I'd known what I know now, I would never have ordered the boats lowered. By the time we were close enough to see that two of the three of the humpbacks were barnacled brutes every bit as big as the bull that had bludgeoned Gothnak to death, we were within harpoon range. Turning back would have evaporated what was left of our fighting spirit.

So we drove on, backs bent, harpooneers (Myself, Mr Gity, and Jabbywocky) perched like preachers in prow pulpits. Knocked into the drink in the first moments of the skirmish, by the time I regained my place, the calf was belly up and one of the bulls half dead. Injuries on our side were few and slight. Things seemed to be going our way. 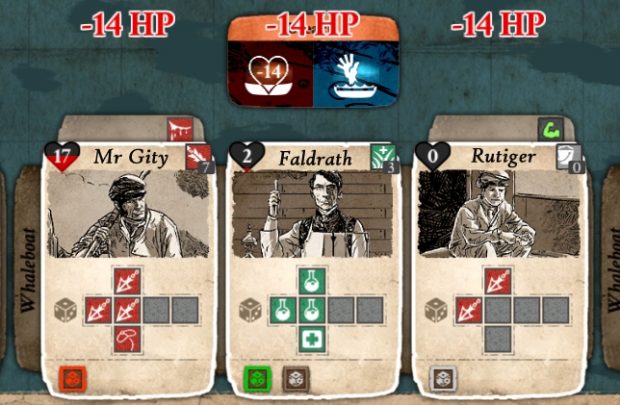 The scales shifted when the scathed humpback, a knobbly-browed colossus with a five-foot lamprey clamped to its lower jaw, breached under Mr Gity's boat, tossing it and its occupants around like spume on a storm-lashed beach. This was the attack that killed young Rutiger, my promising pupil (Beware 'auto assign'! Our fresh-faced cabin boy had clambered into the gig unobserved) and almost doused the life-spark of Faldrath, the surgeon.

Faldrath's fate was now in my hands. Unless my harpoon found its mark, the wounded whale would finish the job it had started. With the fetid reek of my target's breath watering my eyes, and the bulk of its vast blood-streaked head rising before me like a cliff, I muttered my first prayer in forty years and let fly.

Over the last few weeks I've been attempting to catch-up with all the coders and studios who insist on putting Realism on a pedestal even if that means Profit and Popularity then have to perch precariously on a pile of old railway magazines or a dusty 1:350 scale model of HMS Illustrious. Acutely aware that Flare Path isn't following the labours of these noble Truth Chasers quite as assiduously as it should, I've cheekily asked them to fill in the gaps themselves by providing status reports on ongoing projects. Today, Finn, Juha Kellokoski, talks about Armored Brigade, a top-down 1965-91 wargame with a fair amount of Close Combat and Combat Mission in its DNA, and the kind of canny, script-snubbing AI that dreams are made of. AB is currently negotiating that difficult mountain road between Freeware Gem and, fingers-crossed, Commercial Success.

(All screenshots from the Alpha build) 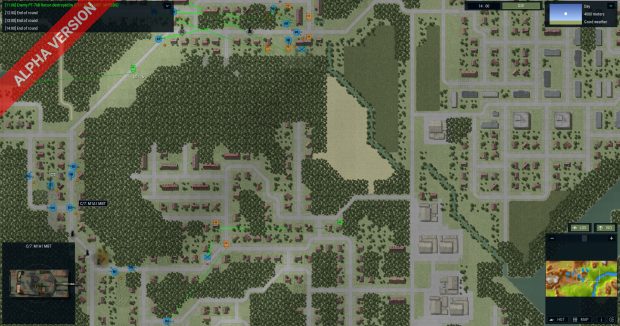 “The year 2017 marked a new era for Armored Brigade. We started cooperating with Slitherine and a professional UI designer joined the team. He's making all the maps, and has taken them to a completely new level in quality and detail. The UI has been going through a total rework. The game already had a working system in place, and we didn't want to scrap all of it, so although the new UI looks very different it was designed with the underlying engine framework in mind.

Working on the database presented us with issues common to any kind of military research. The dominant motif while covering decades of sometimes-obscure armies and weapons is incompleteness and partiality of sources. What database creators mostly encounter are just traces or fragments of information which may be in the form of primary, secondary or tertiary sources: an overwhelming volume of material to read. Books, diaries, letters, maps, photographs, journals, committee minutes, memos, films and reports to name but a few. For the researcher, this volume of ‘stuff’, can be very tiresome in nature, particularly if in different languages or requiring additional technical knowledge. 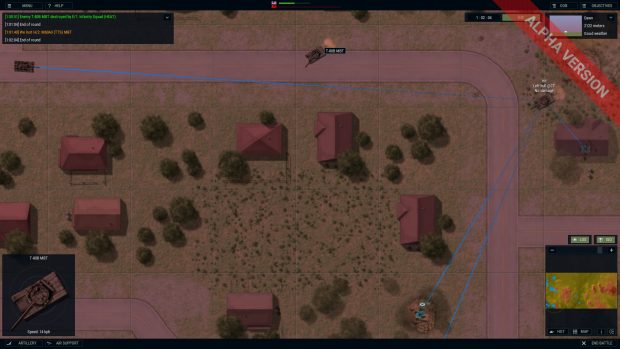 This year is the 10th anniversary of the first public Armored Brigade freeware release. That makes 2018 a perfect spot for publishing the first commercial edition of the game. We keep doing this with our small team and with basically zero budget. Fortunately these days the Internet offers plenty of free tools for indie developers and global teams. It will be challenging to meet the audience's high expectations, produce the highest quality game possible and at the same time try to respect the deadlines.” 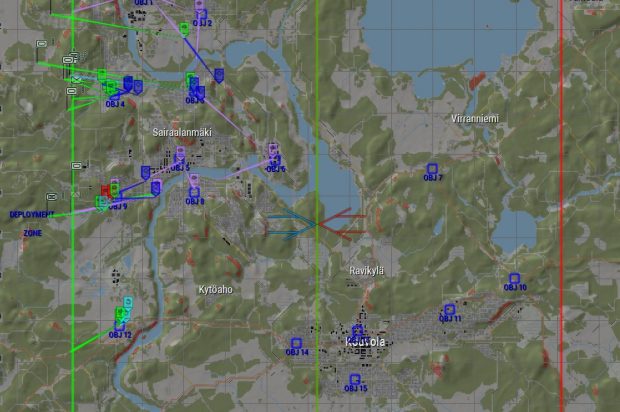