Nobody listens to a word I say. I might be a legend of the game and one of the most beloved footballers of my generation but as soon as I stick my nose in at half-time, all the energy is sucked out of the dressing room.

Football Manager 2018 gives me all of the data I need to understand why the team are uninterested or unhappy, but I'm not convinced it gives me any meaningful or interesting tools to address those factors. On the pitch, I'm enjoying it as much as I ever have, but whether it's a reflection of reality or not, I find the basics of dealing with a squad of sulks as tedious as Ashley Cole's autobiography.

In recent years, Football Manager has been making a slow but determined shift toward stronger role-playing elements. It began, in earnest, with a renewed emphasis on player roles and instructions rather than more abstract tactical sliders. Since then, the trend has been toward making a game about dealing with players as functioning human beings rather than a bundle of stats. This year's biggest introduction, the dynamics feature that breaks down inter-squad relationships and cliques, is a natural extension of that idea and I think it might eventually be an important one. But I'm not convinced by it yet.

For a new feature to take a year or two to find its place in the vast simulation is nothing new, but this version of Football Manager feels like it's on the verge of a significant change but hasn't quite figured out where all the new pieces fit into the puzzle. On one hand, it has the best supporting cast of any game in the series, with scouts, assistant managers, directors of football and all of those other staff roles capable of taking charge of areas of a club, leaving me to concentrate on the areas I find most interesting. On the other hand, I find myself grateful for all of the information the game is presenting me with, but frustrated by the limited ways that I can manipulate that data.

The staff responsibilities aren't new. It's been possible to delegate for a while, but just as the players themselves have been given more character over recent years, the revamped scouting and medical centre succeed in making that area of the club operate like an independent entity that sifts through data and attempts to present it to you, the manager, in a useful and credible fashion. In other areas, however, particularly the constant merry-go-round of man management, I don't feel engaged with the process.

The flavour text helps, letting me know when I've lost the dressing room for a moment or for good, but the processes involved are so repetitive that I feel like I'm pulling levers and pushing switches to keep a machine running rather than dealing with egos and passions and prima donnas. Too often, there's a correct solution and a few bad choices when figuring out how to approach a bad apple in the squad, or a squad-wide lack of confidence or belief.

Football Manager is striving to make me feel like a human being communicating with and directing other human beings, but those dressing room interactions and team talks are more like being a mechanic. I'm not deciding what I should say, or how I should approach a problem, I'm calibrating the settings, just as I was with the sliders, but through a conversational interface rather than by digging into the guts of the simulation. I can't escape the sense that I'm still fiddling with all of the same bits and pieces that I have been for years; the tools I have to perform my job have changed drastically, but under the hood the components are essentially the same.

Sometimes the new tools are more efficient and simply more enjoyable to use, and most of the positives are where it really counts in the match day experience. Changes to some of the tactical screens, including the mid-match substitutions and formation alterations, feel like attempts to reinvent a perfectly acceptable wheel. I'm sure I'll get used to them all in time but the flow of information sometimes makes me feel like someone has rearranged the furniture in my house while I was on holiday. I reach out to put a cup of coffee on a side-table and it drops to the floor because the side-table has been inexplicably relocated to the other side of the sofa.

A few stains on the carpet can be forgiven though because the actual match engine is my favourite to date. I've always admired the way in which thousands of stats and AI decisions can create something that comes even vaguely close to resembling the often-muddled complexity of a football match. I've also been a long-time admirer of the 3d match engine, which makes me feel like an outlier whenever I encounter those Football Manager fans who swear by the text commentary or old 2d top-down view.

It's not perfect, visually or in the way it reacts to my tactical changes, but 2018's matches get so many of the little things right. Forwards who play off the shoulder of defensive lines can be seen making pre-emptive runs, risking an offside flag or seething against teammates who fail to spot their movement in time (or at all). Defenders sometimes blunder in like Phil Jones laying ruin to a china shop, and sometimes hesitate and then struggle to catch speedy wingers, like Gary Neville on his last legs.

Apologies for the Man United references but they're my team in real life and the club I've spent most time with in the game so far this year, so the references shall continue.

Lukaku lumbers, Herrera simmers, Rashford sparkles (and often frustrates). I even react to Paul Pogba as I do when watching him in the real world, wondering why he's getting such high ratings when he only seems to do one or two special things in a game. Look at the data, broken down in more detail than ever, and the truth of his performances becomes clear; he might only produce something spectacular every once in a while, but his positional play and passing is so rarely at fault that he can act not just as the spine of the midfield but as the skeletal structure of the whole team.

Having the right (or wrong) players is just the start though. Tactics haven't changed dramatically since last year, on the surface at least, but teams are pleasingly malleable. The impact of new instructions, for either individuals or the entire unit, are usually noticeable fairly quickly, and I've been able to turn games around and throw them away by tinkering and fine-tuning.

One thing I can't commit to is a judgement of long-term transfer AI. Squad-building has always been a difficult thing for AI managers to handle as the years and decades go by, and when I've simulated far into the future I've seen some oddities. Teams with loads of strong players for one or two positions and obvious weaknesses elsewhere. Eighty million quid signings seemingly replaced by new ninety million quid signings in the same window before they've even had a chance to play a couple of matches. 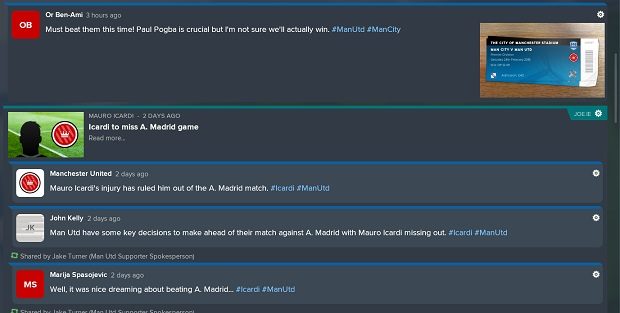 It's difficult to make a judgement call because I wouldn't see every possible permutation if I played for a million hours, and because the world of football does throw up all kinds of strange situations. If Football Manager's clubs were logical at all times, the game would be so far from reality it might as well be Rollerball. Or cricket.

Teams have character, as well as individual players. You can go to any game as a spectator in Football Manager, which generates little news stories about your reasons for doing so that amuse me, and I've spent a bit of time watching my Premier League rivals in my first couple of seasons. Tottenham are exciting to watch but as of 2020, haven't won a trophy (though they did get to the Champions League final in the 2018/19 season, losing 3-0 to PSG). Man City are lethal and elegant. Stoke are stodgy but deliver an occasional knock-out blow that I can't help but admire.

The problem is that despite all of the squad dynamics and hierarchies and social groups, none of that character exists in the dressing rooms or boardrooms. I still find it hard to make myself care the umpteenth time players rebel over some perceived slight and the only real difference is that this year, I can trace the problem back to its source much more efficiently. 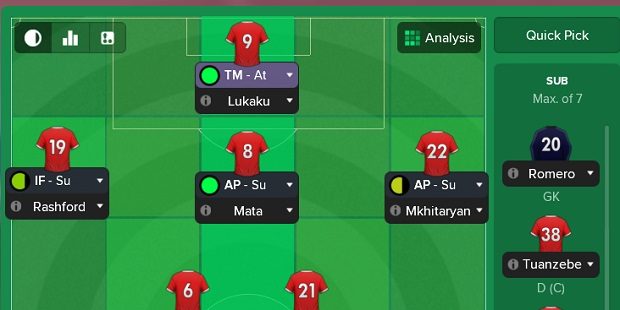 I don't want to be efficient though; I want to be engaged. Football Manager is, essentially, a game about interpreting data, whether its scouting reports, an opponent's style, or your own team's results and tactics. This year's edition consolidates a lot of information, finding new ways to present it. That is, mostly, welcome.

On the man management side, my problem is not with the way the data is represented. I like the hierarchy screen and I enjoy getting notifications to let me know that one of my players has settled into a new social group. The problem is that on the tactical side, Football Manager is packed with subtle changes and coaxing the desired outcome out of the simulation is a wonderful challenge. Squad dynamics lack those subtleties. I'm either the iron hand or the velvet glove, the arm around the shoulder or the hairdryer to the face. Eventually, I'm not playing a role at all, I'm just ticking the right box to make the moaning go away.

In many ways, I feel the same way about Football Manager 2018 as I do about football in 2018. I love the sport, but I found so much of the talk around it and the personalities involved more than a little bit tiresome.