It’d be easy for me to describe Fortnite [official site] as “DIY Left 4 Dead”. It’s the recent free-to-play zombie shooter from Epic Games [correction: it will be free-to-play but it's non-sale price is currently £34.99 for a 'Founder's Pack'], tasking you and three pals with building defences and scavenging supplies between waves of cartoonish undead, all spawned into existence by a paranormal purple storm. But to compare it so readily to Valve’s co-op shooter would evoke a brilliance it simply lacks. Fortnite is one of the most obnoxiously loud and over-designed games I’ve played in a long while.

The premise is much simpler than what transpires on-screen: the world is being ravaged by all sorts of strange zombos, here called “husks”. Some of them are fat and carry explosive propane tanks, some of them throw bones at you, some lob flaming noggins, some of them have bee hives stuck on their heads. 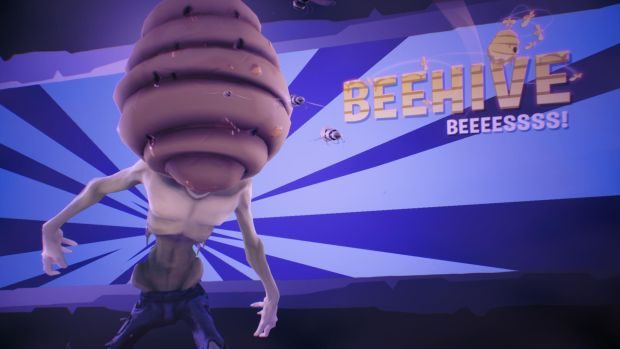 Like all good zombies, they dislike walls and people who build walls. As the foremost wall-builder of this world, you go into each large level (filled with destructible cars, petrol stations, apartment buildings, trees, boulders, and so on) to collect wood, bricks, metal and other stuff in order to build up a defensive area around an important device or objective. Then, when you and your three friends are ready, you hit a button and defend against an oncoming horde for a few minutes, using firearms, swords, air strikes and other character-based skills. Once the timer runs out, hurray, you did it. Collect your XP, your gift-wrapped loot crate, and it’s back to the menu screens. 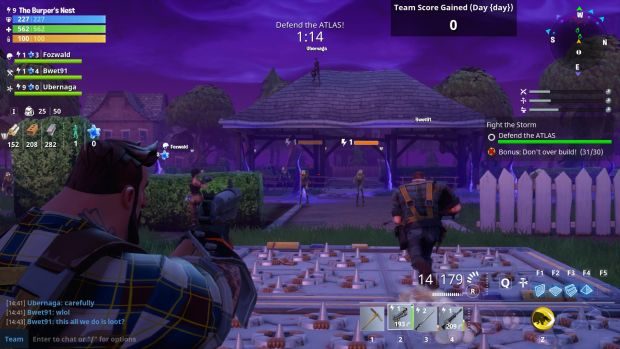 The forts you’re building in these levels are intended to be impermanent, hodge-podge creations, thrown together using the game’s simple but flexible building system. You can craft traps as you go, placing down spikes on the ground or darts that fire from the walls, provided you have the blueprints for these creations. There’s a bit of an Orcs Must Die! feeling to the fortification process. You know which direction the enemy horde is coming from, so you can anticipate their path when they do arrive, laying down an alley of retractable iron spikes on the ground or zappy ceiling traps in critical chokepoints.

You also craft bullets and new guns the same way, dipping into your crafting menus to mush together a new shotgun or heavy machine gun as your current gun’s durability starts to warn you of a collapse. Only your home base (a headquarters undergoing constant bit-by-bit improvement over the course of a long tutorial campaign) is static and yours. But even that location is considered a recurring “level”, a place where the player is transported between ceaseless trips to the menu screens. If there’s something new players should know going into this, it’s that this isn’t a sandbox game in the traditional sense, nor is it a survival game, despite its efforts to look, feel, sound and act like one. It’s a noisy loot-focused shooter, one with more pointless numbers than you will ever care to look at or understand. 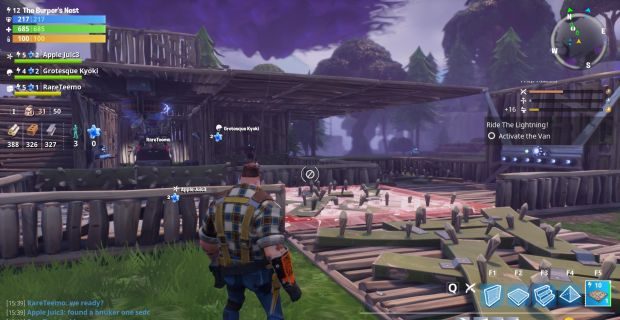 There is character to it. The animation and artwork is a fun mash-up between Plants vs Zombies and Team Fortress 2, with a large and diverse cast of heroes, each with particular skills and advantages. Some are constructors who can charge at enemies and push them back a great distance. Others are nippy ninjas who excel at using melee weapons and weaving their way through the zombie mob. Others are skilled in scavenging items at a quicker rate, some are simply better marksmen. Later on, universal skills like the ability to call in an airstrike allow you to customise your character further.

But once you’re on the map, the colourful world and kooky characters can’t distract you from the baseline atmosphere of aimless farming and zombie bashing. Aside from the main job of fort defence (which you can instigate at will) there are a lot of small tasks to do during any jaunt into the suburbs or parkland areas – save survivors from some husks, collect supplies, defend a crashed drone, collect radio broadcasts – but each small task is the same as the last with a different skin. Sometimes you can choose to build a radar tower to a glowing ghostly specification, which will help point out survivors. But even that is not very distinct from your main goal in each level. 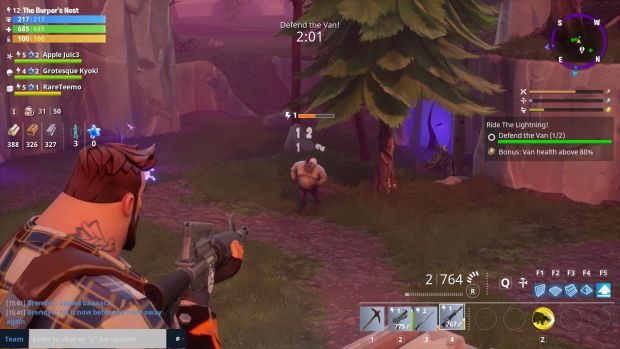 In short, I found it difficult to overcome the sense of repetition, the motive-less wood collecting, the same old survivor-saving. When combat does occur, it’s a straightforward, head-shooting matter of crowd control. I’d say it was like shooting fish in a barrel but by the time I fired at most of my enemies, there was a 50% chance they’d already been felled by a team mate. In this analogy, I was constantly approaching the barrel with my 9mm ready and then exclaiming: “Hey, these fish have already been shot.”

As unexciting as the fighting and screw-scavenging is, it does pick up as your progress. Hordes become more numerous and the mix of enemies more diverse, serving to make you reconsider your makeshift tower defence decisions. Small, fast-moving husks appear to put pressure on you, firey grenadier husks force you to make sure you’ve got a roof over the device you’re protecting. Still, I never felt as “against the wall” as I have in the Left 4 Dead, for example. Even the hardest battle here hasn’t seen my team losing a single steel wall from our cobbled-together compound. Bullets and guns are used to such a good effect in most scenarios of the game that there is barely any need for the other Orcs! style traps and defences, and using them often feels like you've wasted a good trap. Only when the story shoves you back to your home base – the only place where building things is permanent – did it feel like spikey floors and wall darts were absolutely necessary. Probably because these missions usually see you defending your base alone. 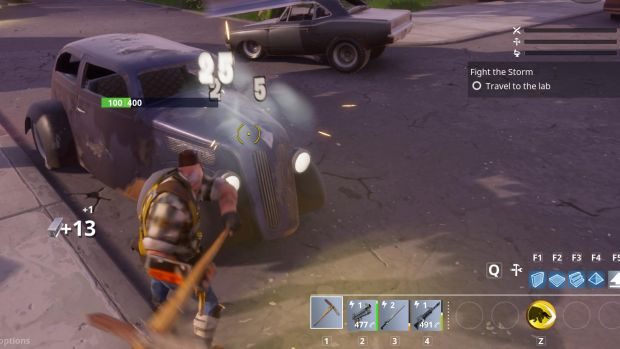 But it’s possible I haven’t reached the point at which the hurt starts coming. Of course, I don’t feel compelled to reach that point either, because Fortnite is only 50% shooting and car-bashing. The other 50% is being trapped in a cacophonous chamber of free-to-play sub-menus and half-features, all screaming for attention like a box full of stinking ferret babies.

I’ve already explained how at the end of a level all you’ve built is gone. You and your team mates go your separate ways (unless you’re partied up) and the XP you’ve earned goes into a pseudobase of your own. This base is depicted in the form of a cluttered and overwhelming series of menus, perpetually flashing with exclams to notify you of new bits, new bobs, new schematics to peruse, new resources to inspect, new survivors to place into slots (these grant imperceptible static bonuses), new quests, new research points, new garbage, fresh new stinking garbage, get your hot new garbage now (exclam exclam exclam). 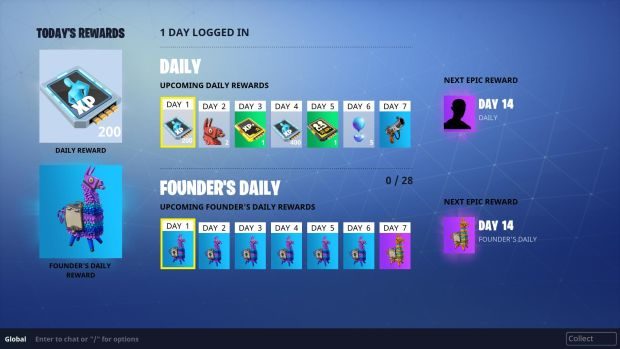 A cluttered user interface is one thing. But this is an interface that does everything it can to highlight the grubby free-to-play parts of the “game” over the actual playing of the game itself. It feels like somebody went to work at Epic with an F2P bucket list and was determined to shove every single bullet point into this single game, no matter how crowded and overwhelming the resulting experiment turned out.

Let’s look at some of the things we can find:

These are just the most clearly displayed features. It is a monetiser’s kombucha, the fizzy fermentation of umpteen sleazy ideas from the past 10 years made possible with what I can only guess is some sort of horrible F2P scobie that lives in Epic's pantry cupboard. And I haven’t even mentioned the rando-drop loot crates yet. 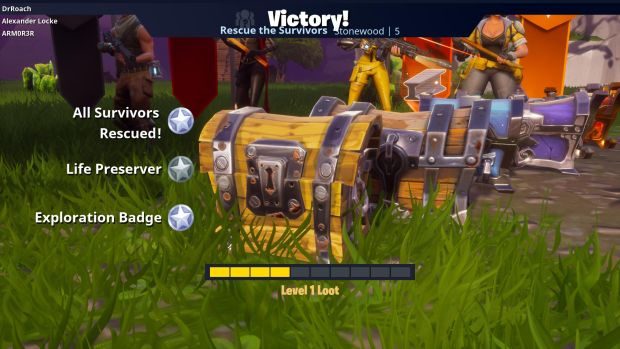 In Fortnite, there are loot crates inside the loot crates. I am not making this up. When you complete a level you get awarded a certain tier of loot crate, depending on how well you and the team scored. Inside these might be a loot pinata (no really, it’s a crate that’s themed as a funny talking llama with colourful paper frills). In the menus, you take a hammer or axe or sword or various other melee weapon to these unwilling treasure troves to unveil their insides – XP injections, survivor plug-ins, weapon schematics, and so on. 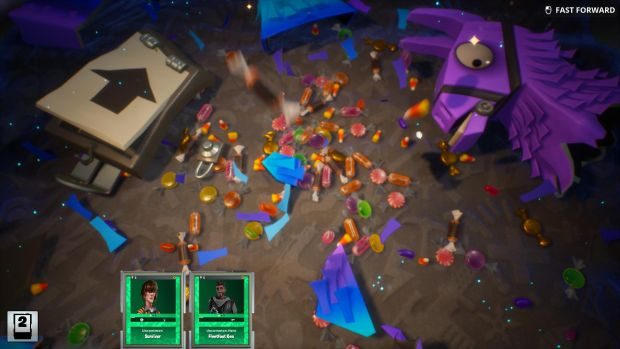 But sometimes… sometimes the llamas turn silver when you hit them, meaning they have rarer goodies inside.

And – oh my god – sometimes, those silver llamas, when you hit them... they turn gold. 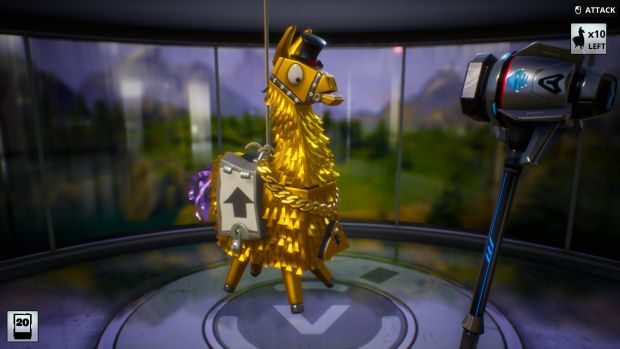 We don’t talk about the free-to-play trashtrappings very much any more in the games press, because there is often the understanding that everyone is bored to death of thinking about it. We tend to acknowledge these practices as unseemly, while tolerating them so long as the underlying game is decent. In that sense, Fortnite’s crime is that the game underneath isn’t worth all this muddy trouble. I should also say that I don’t think Epic’s game is more psychologically exploitative than many other F2P games, per se, I am just overwhelmed by the sheer volume of its skulduggery. And I mean volume in both terms of “holy Moses there is quite a lot of toxic trash here” and “holy Moses this toxic trash is inexplicably loud”.

Nor am I suggesting that the game isn’t “generous” - a term every F2P game longs to have as a descriptor. It hands out upgrades and schematics, literally like candy (at least as far as I’ve played, although it should be noted we were supplied with a founders pack worth £29.99). But this smorgasbord of goodies feels like it’s being offered by the child-catcher. Every little upgrade or perk only furthers the getting of more goodies, they aren’t generally designed to make the zombies-in-a-barrel game itself more fun. It isn’t a well-made pastime that, all right, needs to make a buck if you want to keep playing, a la Dota or Overwatch. It’s a game that shouts everything it can think of to get into your head. As a result you just find yourself actively “shushing” it. 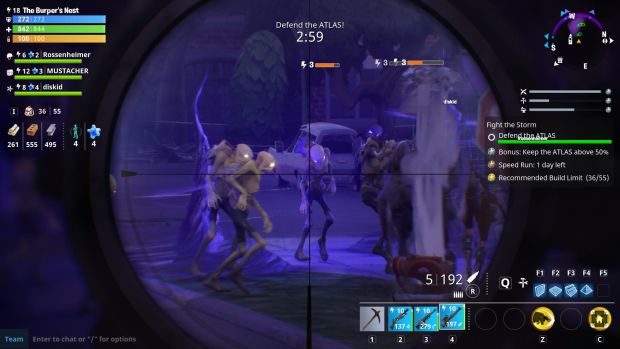 But that loudness also serves as a warning. I can’t tell whether it’s better or worse to be able to see every slimy F2P tendril rising out of its Eldritch centre, but it’s so obvious that it almost feels brazen. It’s telling that one of the resources you are constantly shifting about in the menus is People – survivors who add bonuses which are absolutely unnoticeable in-game and serve only to grant the satisfaction of assigning a green number over a red one. People-as-resources is something you see in a lot of zombie games. But only in Fortnite have I felt like the game design itself to be centred around such a cynical and muddy philosophy.

Perhaps most importantly, though, the game itself – when you actually do your best to ignore the menu noise - isn’t that interesting. Every level plays out in more-or-less an identical way. You wander off to collect stuff, you smash a few cars, save a few survivors, then all four of you gather around a single point for a game of lacklustre third-person tower defence. Those who want a team-based zombie shooter, or a base-building game, deserve better than to be snatched up by the likes of Fortnite.

Fortnite is £34.99 through the Epic Games launcher. These impressions are based on build EA1.4. Don't.