I've never been into slasher flicks: gore for the sake of gore has a tendency to bore. Gore for the sake of enhancing a smart, top-down puzzle game about murdering cute bobble-headed civilians though? That I can get on board with.

Friday the 13th: Killer Puzzle is the followup to Slayaway Camp, both from PopCap co-founder Jason Kapalka's new studio, Blue Wizard. This time you're explicitly playing as Jason Voorhees, which essentially makes this Slayaway 2: The Brandening. It's coming out on Friday the 13th of April, because of course it is.

What's new with Killer Puzzle? Beyond the rejigged art and fresh puzzles, the core of the game looks to be much the same. Expect more tile-based slide murdering, punctuated by little timing mini-games where you chop people up in novel and exiting ways. Also novel are the levels, which range from your tried and tested campsites and amusement parks, through to outer space and Victorian London (somehow). 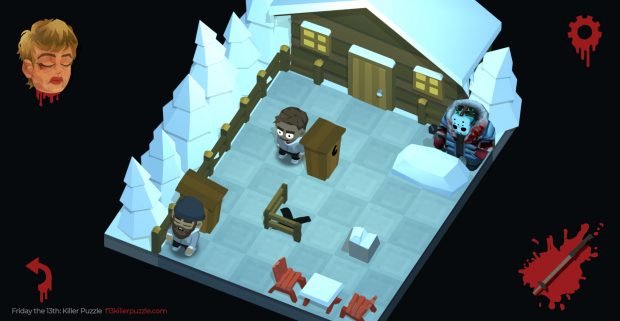 I've just had a little play of the original free version of Slayaway, and it's good...err, wholesome stuff. I mean wholesome in the sense that it's a solid puzzler about skidding around small levels while trying to murder people and avoid getting yourself stuck, rather than in an emotionally nourishing kind of way.

As morbid as it may be, it's the presentation that makes it worthy of a recommendation: there's a certain glee to sliding up to a hapless camper and watching them flee in terror into a nearby fire. It's less awful than it sounds, honest.

Friday the 13th: Killer Puzzle will be out on Steam on April 13th.