I’m standing in Alice’s wheelhouse right now and it is daft. Half these things aren’t even wheels and I’m not sure a cabin filled with vaguely circular objects is where the expression comes from. I don’t know why she’s built this.

But look here. It’s one of those walking simulators she’s always telling us about. This one was released last week and is called 0°N 0°W (or Zero North Zero West, if you can’t stand degrees). It’s a “fantastical multidimensional walkabout through space and time”, say developers Colorfiction. Well, I’ll be the judge of that. Let’s go for a dander.

Okay, we’re outside a petrol station.

That’s good. That’s where every good dander begins. But what’s that down the road? Ah, a cinema. 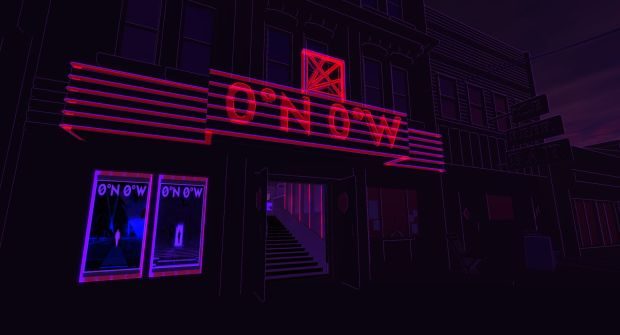 That’s fine. We expected this. Let’s go through one of the doors. Bloop.

Ah yes, a creamy pink spiral staircase. And the sound of waves, the ocean. We’re on an island. But this island also has a TV and some sofas. Let’s change the channel on the oh yes I see.

It’s a wobbly, whirring conflagration of clicks and warbles, hmm yes, a spirographical summation of the early internet… is what I would say if I were an art critic! Ha ha ha! But I’m a games journalist. It’s obvious this is just where the graphics live. Onward, through another door.

Now I’m falling through a garish gridsky. It hurts to look around. But finally…

Now this is my kind of foreign dimension. It’s got a dining table, a bed, a bathroom, a big library. It’s even got a PC, not to mention an enviable view of the city. Is it possible this "city" is actually a spittle-built hive constructed by monstrous extradimensional warpbeasts? Yes, it’s possible. Possible. But look at the high ceilings. 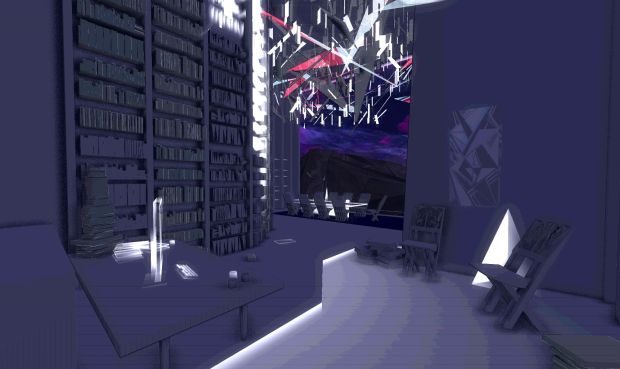 Yes, I think I’ll stay here. There’s more sliding to be done and more audiovisual fireworks to see, but I’m happy in my new house. I can file articles from the computer and get Tesco to deliver. If you want to come and sit around my dining table, 0°N 0°W is on Steam for £7.19/$9.99.