(Now updated with extra pricing clarification) There were a lot of things left unsaid during Google's Stadia announcement three months ago, but finally the search giant has given us some answers in today's Stadia Connect conference, confirming how much Stadia's going to cost, when we can get our hands on it and exactly what games we're going to be playing on it. So, err... Baldur's Gate 3, anyone?

Yep, that's right. Baldur's Gate 3 is coming to Google Stadia at launch. It's the biggest game Larian's ever made, and you can go and read all about it in Matthew's big Baldur's Gate III preview.

Joining Baldur's Gate III in Stadia's launch line-up is Ubisoft's new Ghost Recon Breakpoint, and the not-so-new The Division 2. Moonshine Studio's co-op party game Get Packed is going to be a Stadia launch title as well, and we also saw a glimpse of a brand new (and Stadia exclusive) game from Rime studio Tequila Works called Gylt, which looks to be a spooky kind of puzzle-y horror-y game. Have a watch of the trailer below:

That's not all, either, as there are more games due to be announced later this summer, including titles from Capcom, Rockstar and EA. For now, though, here's a nice sizzle reel:

UPDATED: So how much is Stadia going to cost? Well, it's a little complicated. Technically, Stadia is a free service where you'll be buying Stadia games just like you would normally on a store like Steam. However, there will also be a PlayStation Plus-like subscription service that gives you extra benefits.

The regular version of Stadia is called Stadia Base. Here, you'll pay for individual games like normal, and be able to stream them at a maximum resolution of 1920x1080 at 60fps. This won't be available at launch, however, and will only become an option sometime in 2020. 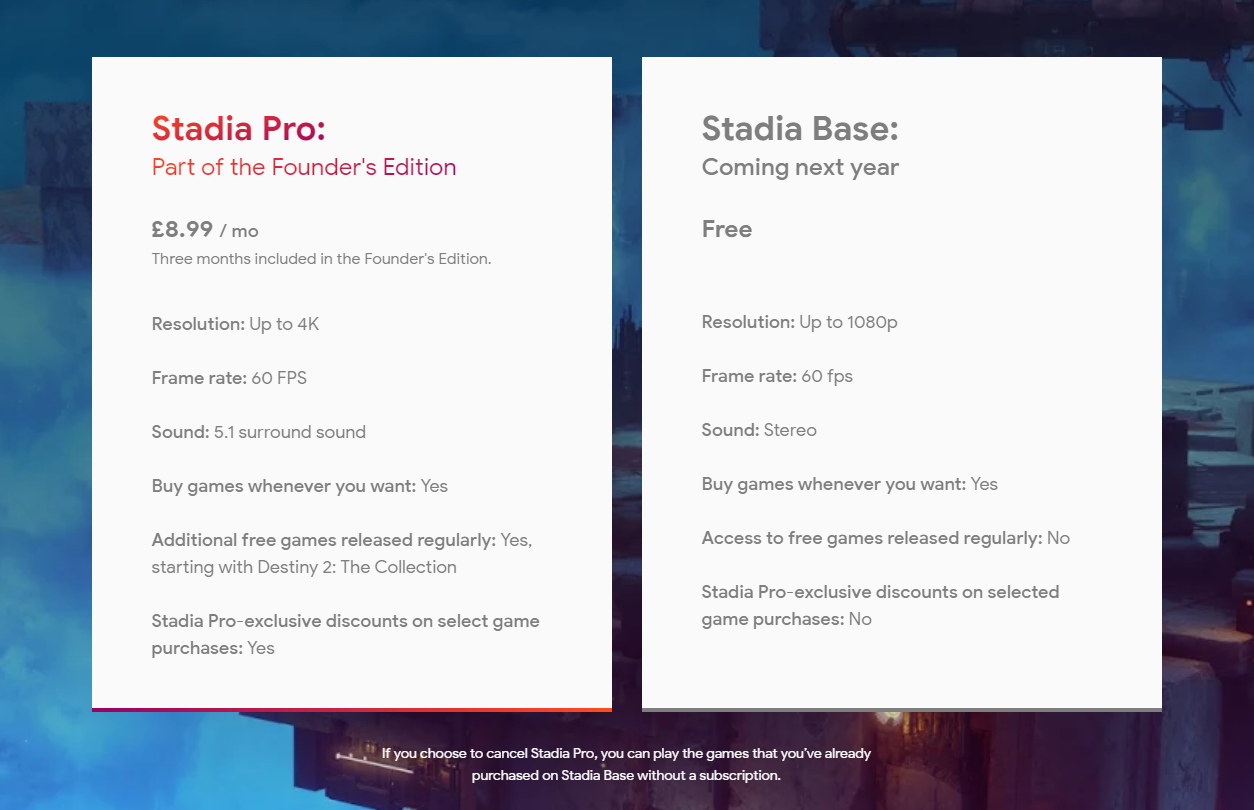 You can also stream in HDR and 5.1 surround sound, which isn't available on Base. You also get access to a handful of free games like you do on PlayStation Plus, too, which will be released at regular intervals. The first free game will be Destiny 2: The Collection, which includes the base game, all previous add-ons and the new Shadowkeep expansion plus the annual pass. 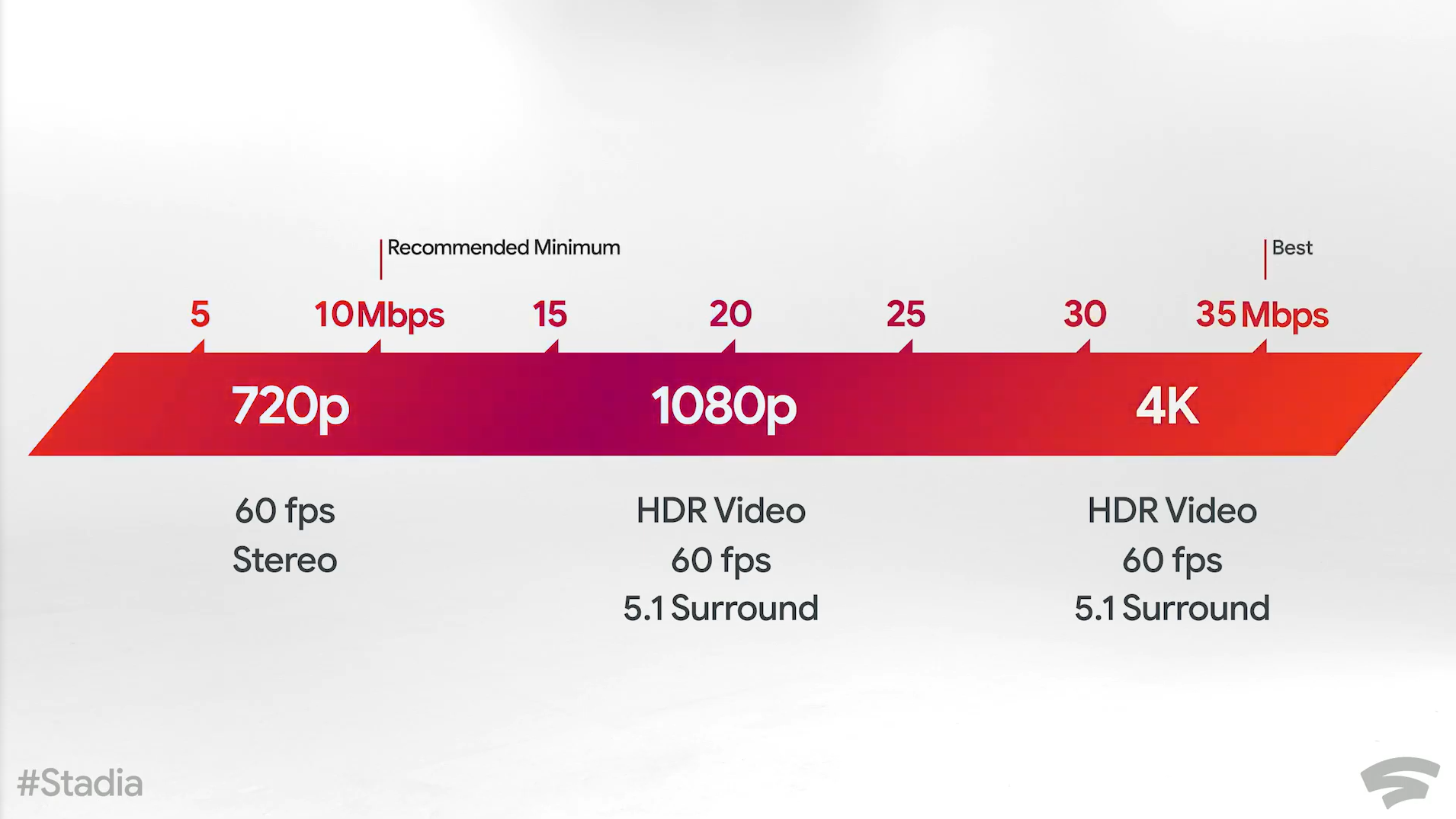 As for what kind of internet you're going to need for either of those price plans, Google said that Pro users will ideally need an internet speed of at least 35Mbps, which isn't nearly as bad as I thought it was going to be. You'll still need a fairly decent internet package for it, mind, but in the UK at least, it's certainly not one of the more astronomically expensive ones. To get the 1080p experience, you'll need 20Mbps, which again, should be fairly reasonable for the majority of broadband users. If you're worried about it, then have a go at Google's own speed test.

The Stadia controller, meanwhile, is going to cost $69 in the US and £59 in the UK. It comes in three colours - white, black and 'wasabi' (or pale green), but remember, you don't technically need this to actually use Stadia. You can still use a mouse and keyboard, or any other type of controller you own.

However, there will also be a limited edition 'night blue' version (see below) if you decide to get the Stadia Founder's Edition. This includes the controller and a Chromecast Ultra so you can use Stadia on your TV, as well as a three-month Stadia Pro subscription for both you and a friend. This costs $129 in the US, and £119 in the UK, and pre-orders are open right now. 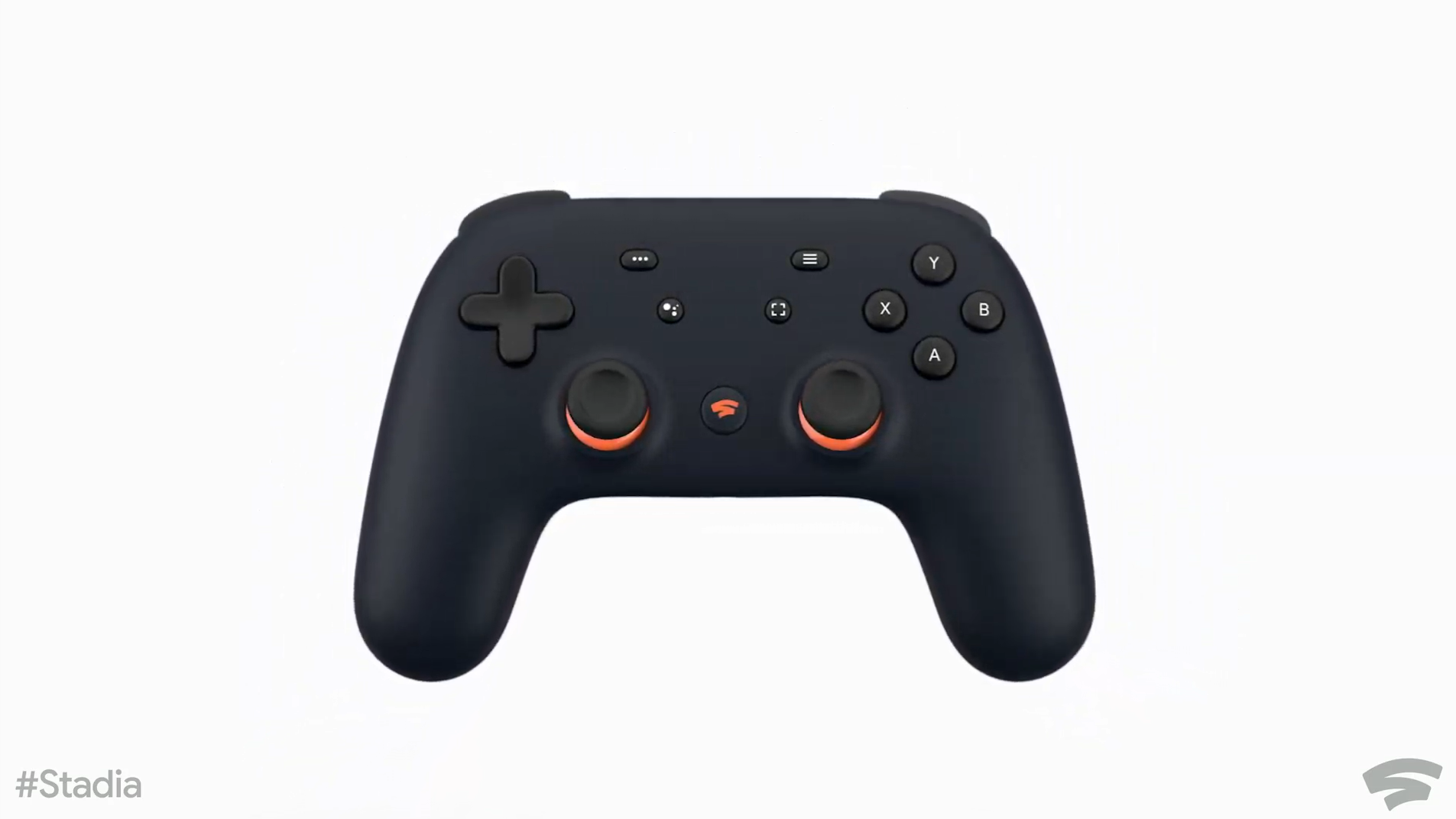 Again, you don't technically need either a controller or a Chromecast Ultra to get started with Stadia, as the whole point of this service is that it works on any screen that runs Chrome. A Chromecast will come in handy for TVs, and if you're only planning on getting Stadia Base, then you can always just get a regular 1080p Chromecast for £30 / $35 instead of the £70 / $70 Ultra model. Otherwise, you can just use your trusty Chrome web browser on your laptop, PC or tablet, or via the dedicated app on Google's Pixel 3 and Pixel 3a smartphones (with support for other smartphones coming in the future).

We still don't know exactly when Stadia is going to launch, but it will arrive in the following countries this November: the US, Canada, UK, Ireland, France, Germany, Italy, Spain, the Netherlands, Belgium, Denmark, Sweden, Norway and Finland.

Other countries will have to wait until 2020 - which in all likelihood will probably coincide with the launch of the Stadia Base pricing plan.