If you click on a link and make a purchase we may receive a small commission. Read our editorial policy.
Premature Evaluation is the weekly column in which Steve Hogarty explores the wilds of early access. This week Steve is still MIA, so Brendan is playing Griftlands, a roguelike card game mostly about arguing.

You can buy drinks for reprobates in Griftlands. The mingling crimefolk of this sci-fi card game hang out in bars and harbours, lounging on static screens hoping to sell you stuff, or waiting for a fight to break out so they can jump in for either side. There are hairy bouncers, froglike bartenders, and scar-faced bandits. Cultists, bent cops, and bounty hunters of all kinds. This is basically a card game based on the pondlife of Mos Eisley cantina, and as a deck-building roguelike of Slay The Spire flavour, it’s too short-lived to confidently recommend just yet. But it has enough character that I’ll happily pull up a stool and sip my spacejuice as developers Klei finish things off. And while I’m at it – bartender - drinks for all my new friends!

Maybe the direct comparison to the current lord of card games isn’t fair. Griftlands isn’t as brush-strokey as Slay The Spire, for one thing. It’s got a cartoon look somewhere between Samurai Jack and Titan A.E. And there are moments of story embedded among the card-fights. As a former derrick worker called Sal, you’re out to kill Kashio, a crime lord who ruined your life. But Kashio is likewise out for your blood, among other factions keen to mess everything up. Most of this is established in bits of dialogue. You’ll sometimes see underlined words and if you hover over them you’ll get a handy explanation of the lore jargon. I think I last saw this in Pyre, and it’s a good trick for introducing the nonsense words of videogameland. 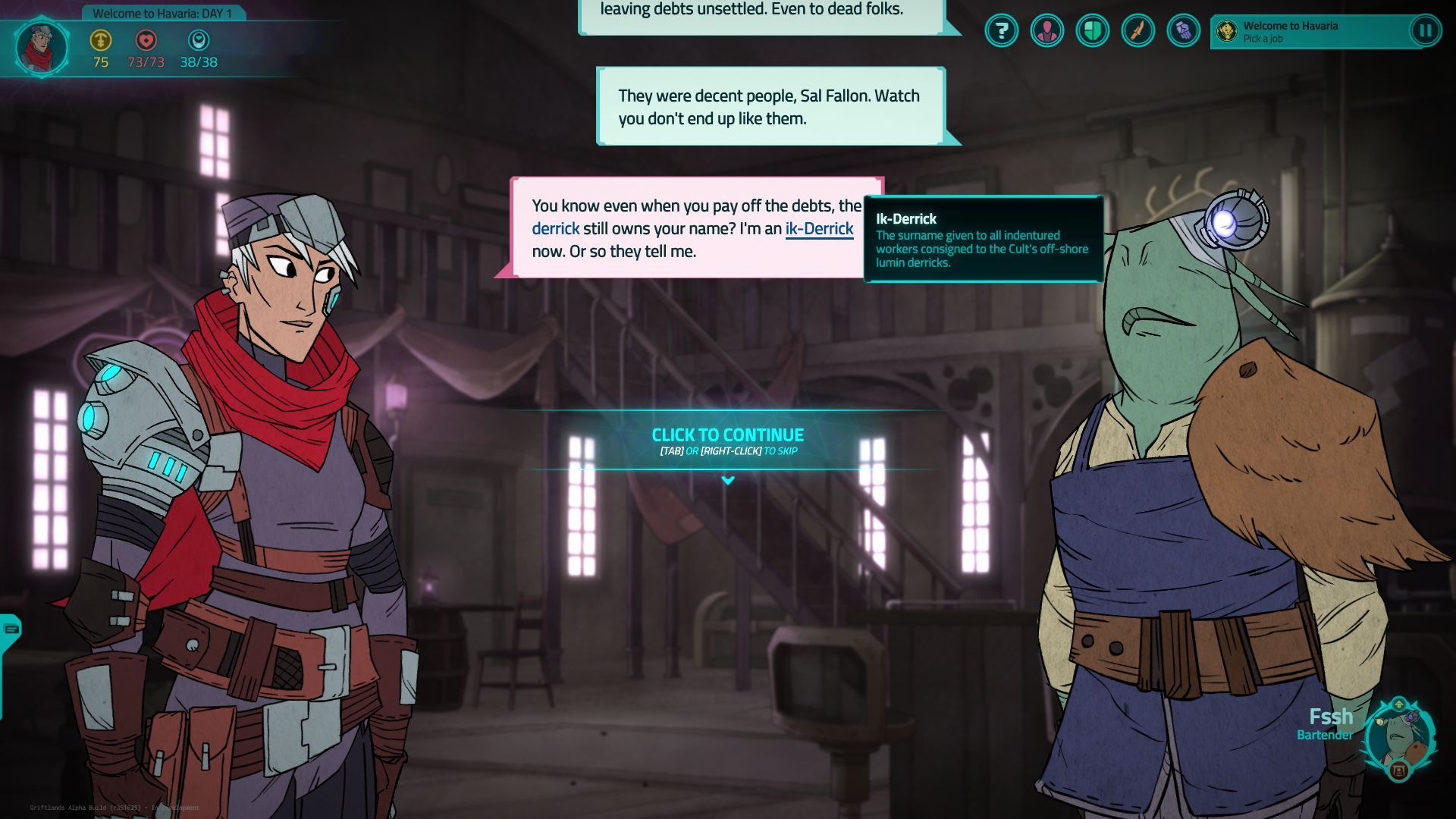 It isn’t quite as welcoming when it comes to explaining the card game parts. There are really two card games going on here. Quests typically go one of two ways – you end up fighting or you end up negotiating. They’re both still framed as card-based conflicts, it’s just that there’s a card game for violent battles and a slightly different card game for chatty battles in which nobody will come out dead. The quick and dirty tutorials leave you to figure out the finer points of number-smashing and health-restoring, especially when it comes to the negotiation game.

These talkfights are hard to understand at first. Basically, you need to bash a big number called your opponent’s “resolve” until it reaches zero. But both you and the other debater will play cards to slot “arguments” into orbit around that central health number. These “arguments” are power-ups or damage-dealers that do things every turn (if you play Slay the Spire, they kind of act like the Defect’s orbs). 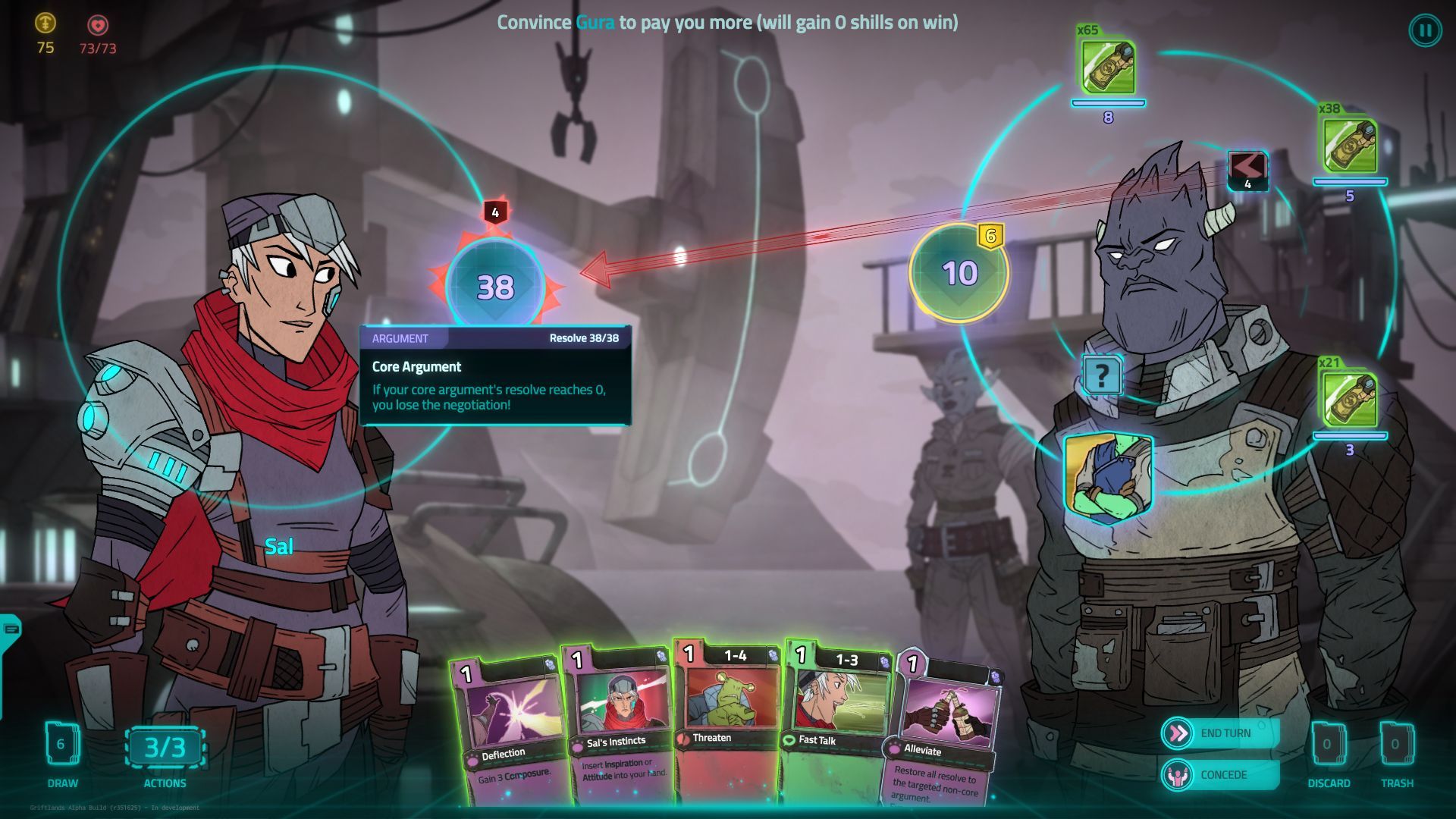 Simply speaking, it’s a drain-their-health-before-they-drain-yours deal. You eventually get a feel for it, but the presentation makes it seem over-complicated. And it’s full of card-jargon that tests even the vocabulary of a seasoned card-flinger. There’s “influence” and “dominance” and “composure”, you “expend” cards or “improvise” them or “replenish” them. Even with the hover-over explanations offered for each term, it can get confusing. For example, some cards say “play this to increase your influence by two” but exactly which digit increases amid the numbers peppered on the screen, is not offered.

I understood the negotiation shouting matches eventually, but there were irksome moments, like when a lot of things happen during the enemy’s turn. They spit out their actions in such a way it’s sometimes hard to tell what they’ve done. Digits bounce and splash around the circular argument track, the enemy does a bunch of things in quick succession, and you’re suddenly 12 points less in health and clueless. This will probably be updated with a ticker tape history of cards and actions, the kind a lot of card games have. But for now the more complex negotiation battles feel a bit disorganised. 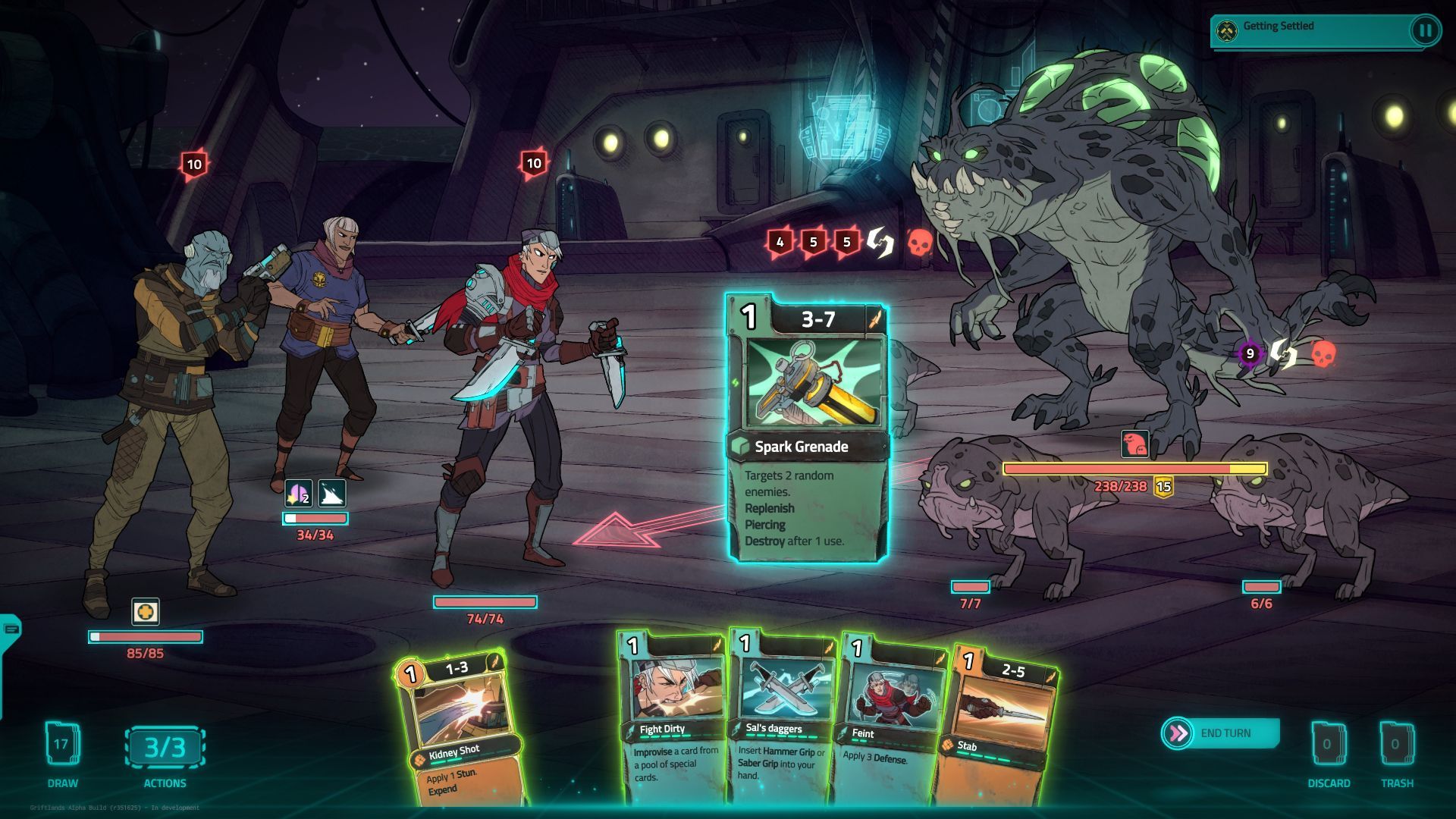 The combat cardfighting is more straightforward, but mostly by virtue of being similar in structure to Slay The Spire. There are straightforward attacks. Defence cards to weather incoming hits. Status effects like “bleed” and “stun”. Anyone who has sliced enough throats with the Silent will be able to get into the flow of this cardicuffs a bit easier. It’s a competent take on the (will he say it) Spirelike (oh no he did).

There are some differences. In a fight, you can get your victim down to their last sliver of health and then accept a surrender (which I'm guessing means not over-shooting your late attacks, and accidentally murdering them). Or you can execute them with a final special cardblow. But this may have consequences. I once killed a big metal-armed wookie-looking fella early in the game, and a new card was added permanently to my deck – the “killer” card. From now on, when I’m negotiating with somebody, and the “killer” card comes up in my hand, all my chat-attacks will be extra intimidating. I’ve basically got the ability to remind shopkeepers I’m a stone-cold monster. 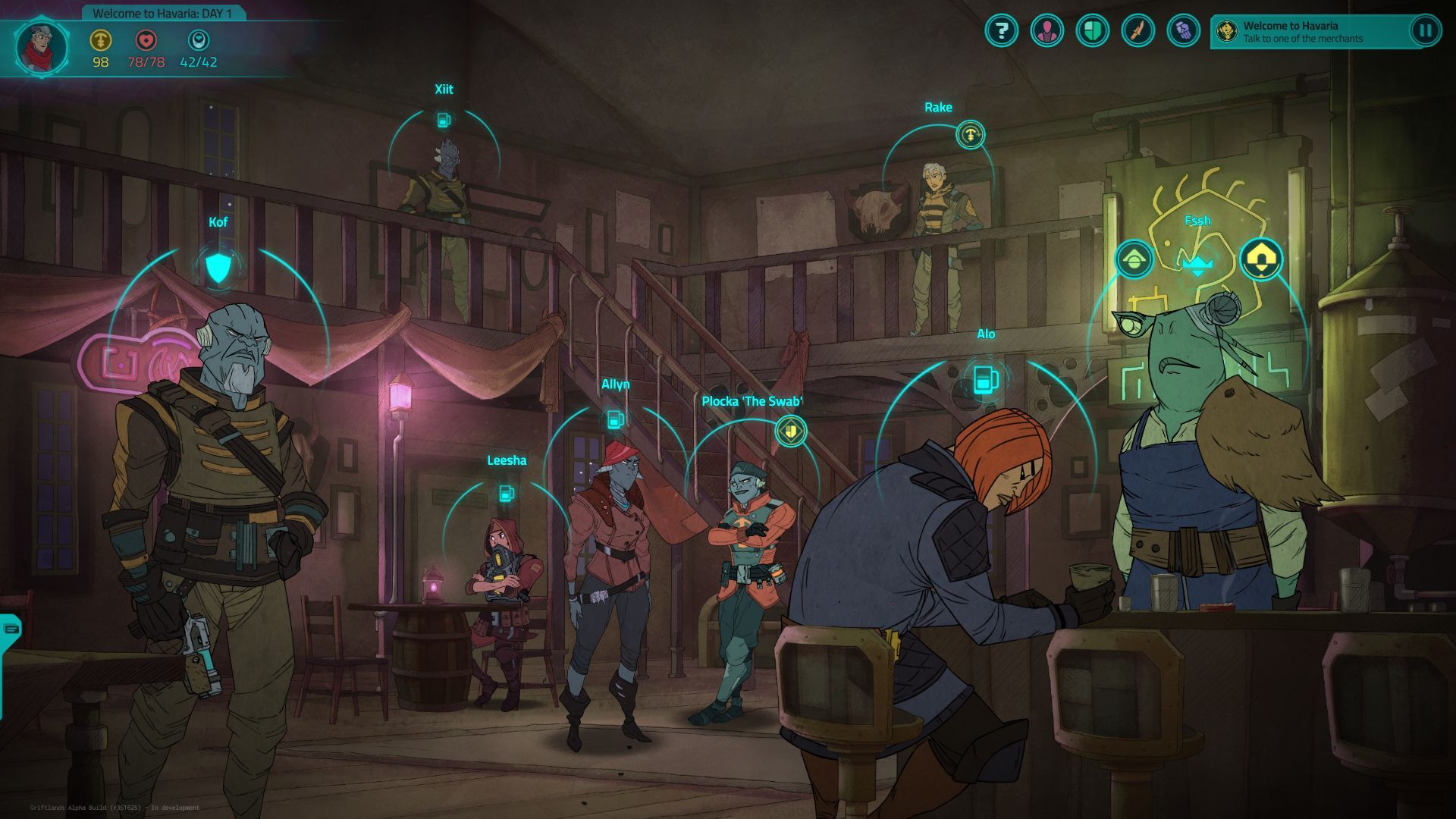 There are a bunch of cards that work in thematic ways like this. When I said you can buy drinks for your pals, I didn’t mean indulging in some round-buying flavour text. You click on the people standing around in a bar and buy them spacegrog, and this will you get some “resolve” back (your chatting health). But you also get the “tipsy” and “slurred words” cards, which will be added to your decks, takin’ up schpace wiv ‘em, thosh dam shtupid cardsh. If you eat a big dinner in the pub, you get health back, but also a “bloated” card that does the same but costs more effort to destroy in the middle of a fight. You basically spend two points of energy to fart.

But drinks are good. They also make a person like you., and if they like you enough you'll get a permanent boon (and if they hate you, a penalty). I had a slug of star gin with Yunni the pencil-pushing bureaucrat, who now loves me, and grants me 4 extra health points. Sadly, that is offset by a woman called Alo, who hates me for killing some hairy loser earlier who she says was her “friend” or whatever. Earning Alo’s hatred deducts 4 points off my max health. So, in terms of friends and nemeses, I’m breaking even. Let’s get another round. 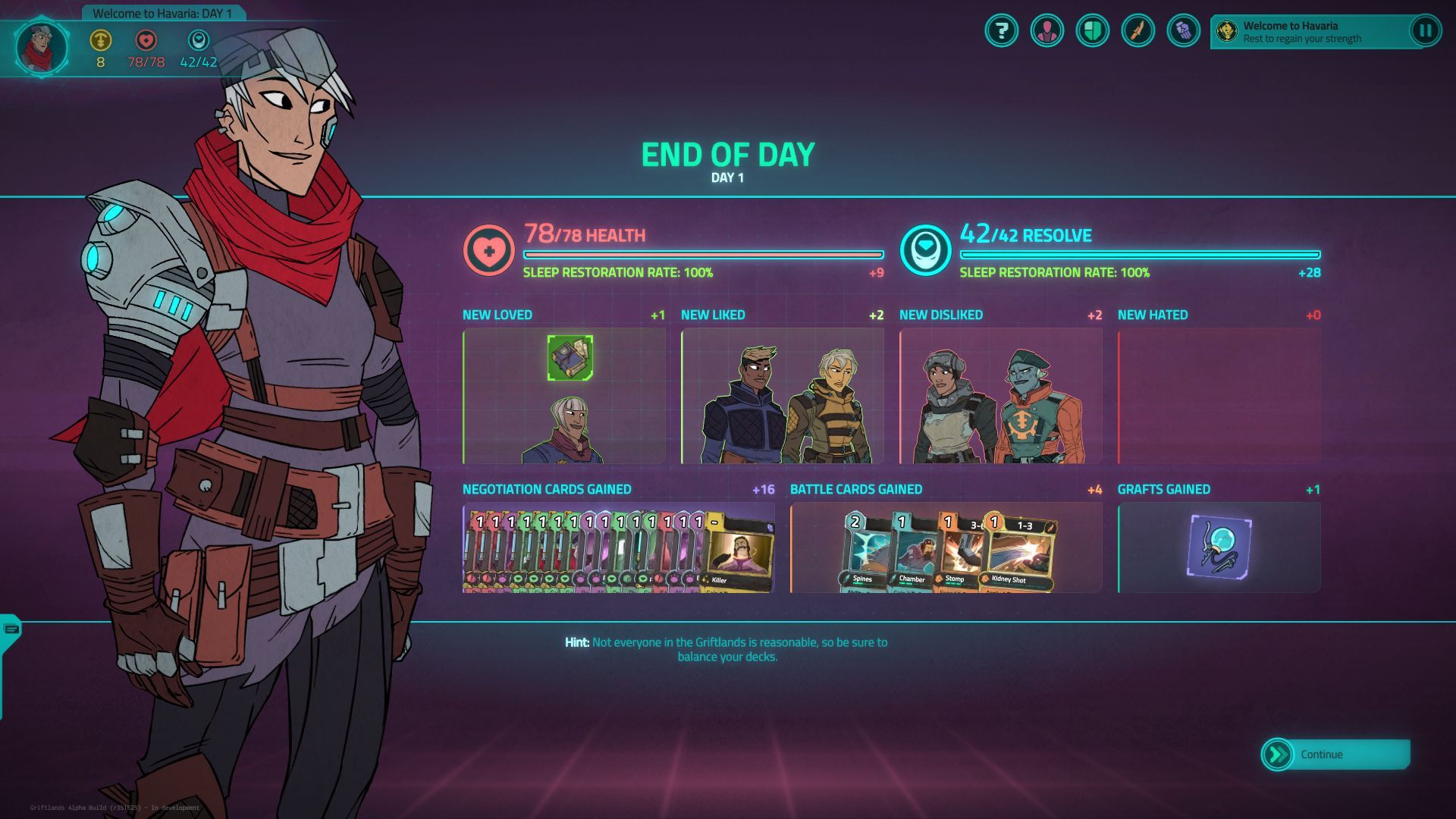 This network of friends and enemies is the most interesting part of the game so far. Having pals matters in other ways. I was once attacked in my crappy bedroom by a red-clad assassin called Zyn, but I let him live after slicing his torso up a bit. For some reason, this endeared me to him, even as he fled. The next day, I went to a bar to have an argument with a bandit. Just another job. But I noticed my would-be assassin, Zyn, standing on the balcony overlooking the tavern. He was just there to drink. When the argument began between my target and I, the assassin popped out from one side and “flustered” the bandit by shouting something vaguely supportive my way. This was a neat little piece of twine stretching from one part of my card-tale to another. Later, I’d be on my way to hire a goon for another, more violent job, when Zyn would approach me again and ask to come along. He’s a good lad, that bloke who tried to murder me.

I like this sense of consequence, and the mingling with degenerates. At the end of an in-game day, you get to rest up and see who likes you and who wants to shiv you in an alley. The next day you might be asked to intercept a hostage transport, only to find one of the guards you’ve been hired to ambush is your old pal Yunni. But even then you might be able to leverage your friendship and convince her to hand the prisoner over. 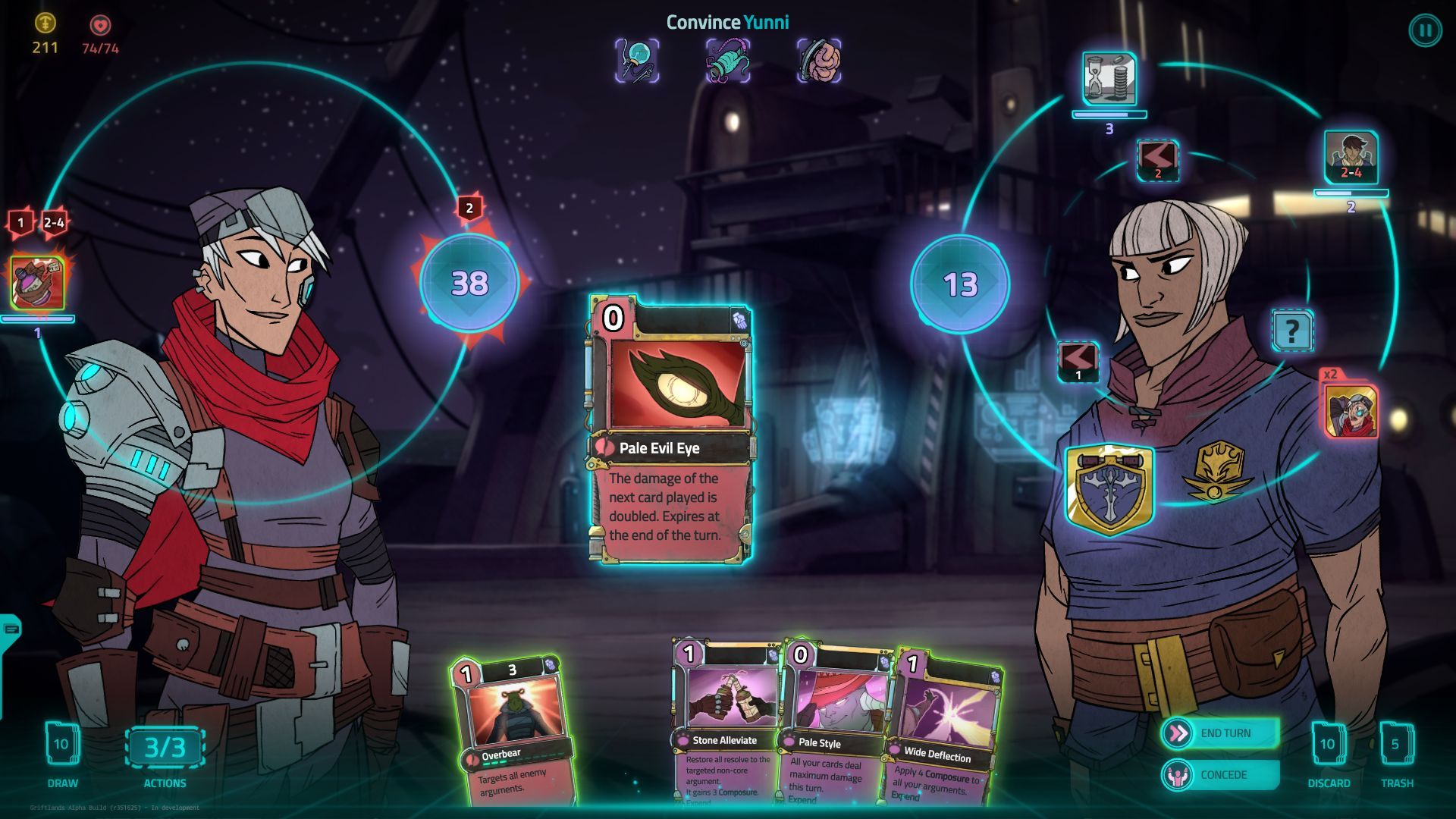 I expected Griftlands to be something else, based on early trailers and hints. To go some other route with its tactical battles. And part of me is sorry to see that Klei did not do something un-cardlike for their battling. On one hand, boiling all negotiation down to a series of tit-for-tat card flopping feels like it takes away some potential for a real story to emerge from this interesting land of cyber-eyed frogfolk and slathering bonejackals (the animation is cool enough for me to want a 20-minute per episode TV show based in this world). But on the other hand, it’s great to see the consequences of my out-of-battle decisions leaking into street arguments and bar fights, via bloaty cards and supportive hecklers. 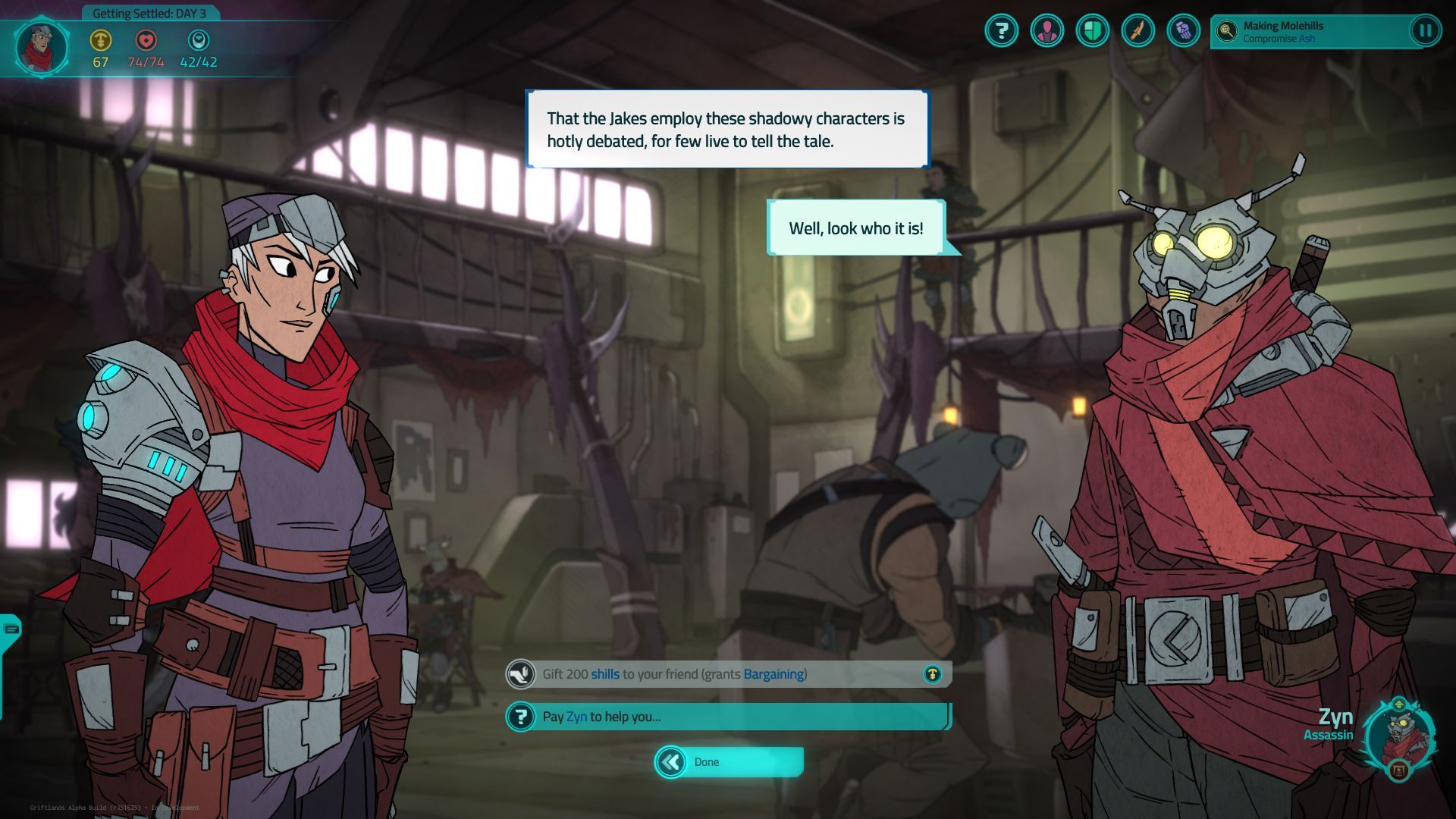 I’m not sure how it stands up to playing over and over right now. I’ve played through twice – once murdered, once victorious. When you get snuffed out you have to start again but you’ll unlock new cards for the next run. You do get a chance to start again from the morning you died, but only once. Or you could carry something over to the next run, like a higher max health, or a random card. Right now there’s only a few days. New playable characters are planned, and even Sal the bounty hunter doesn’t have a finale yet (they say what's here is 80% of her campgaign). But hers is a story I’ll happily continue when it’s ready. For now, pull up a seat, Yunni. Settle in, Zyn. Another round on me.