If you click on a link and make a purchase we may receive a small commission. Read our editorial policy.
Griftlands review
A deckbuilding roguelike with stories and excellent rippling consequences, hooked up to two underwhelming card games

Christ, I'm not sure what to make of Griftlands. At first I was close to adoration. It's an unusually story-focused deckbuilding roguelike - and it's from Klei, of Oxygen Not Included and Don't Starve fame. That sounded wild to me even before I learnt that it's about moseying around as a bounty hunter in an alien city, doing odd jobs for the locals and building up a network of friends and enemies as you work towards pulling off one last big gig. Parts of it are very impressive, and those parts are very impressively tied together. Decisions constantly come back to haunt you in ways that feel seamless.

Thing is, it gets flabby, and the parts where you're actually playing cards just aren't that great.

I should caveat this by saying that I've been playing in-between Monster Train runs, and so the poor thing was always going to suffer. If we were inside one of Griftlands' many shady bars, Monster Train and Slay The Spire would be the two hunks menacing up a corner that the rest of the clientele are too scared to go near. Griftlands would be more like the guy who does a big show and dance when you knock his drink over, but then doesn't want to take things outside because he sprained his knee the day before playing boules.

That's a bit harsh, because Griftlands is so much more than a card game. Testament to that is the way I finished my first quest without playing a single card. 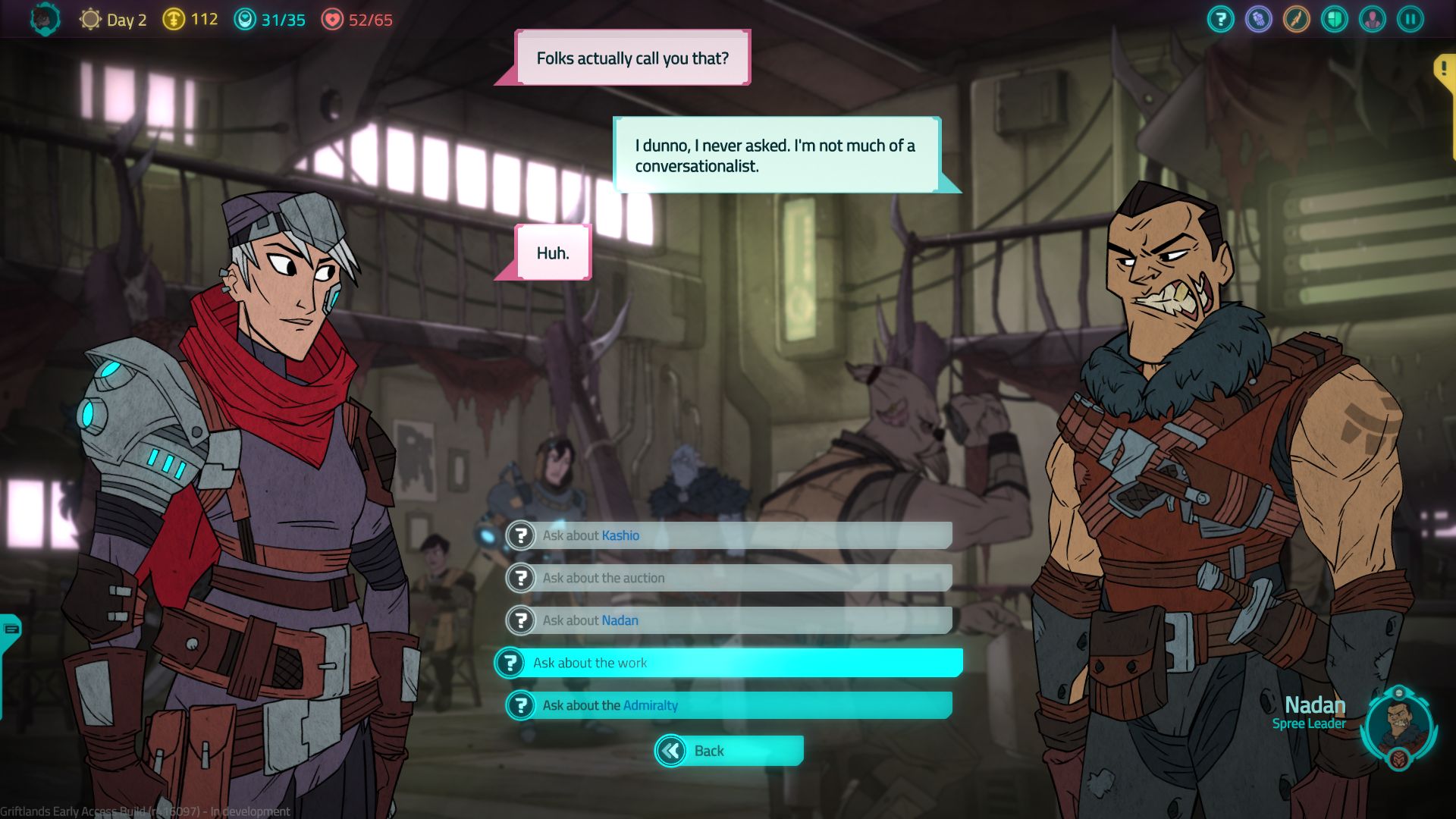 It started with me taking contract from a woman named Bina, who wanted me to shake down a business partner who hadn’t come through with their half of the money. I'm hazy on the details, but it was for some risky venture involving dockyard thugs. I duly went and spoke to the bloke (Veep), and it turned out he’d had to dip into his half to pay off debtors who were threatening to kill him. I had to choose whether to beat Veep up, or offer to pay his share - even though I was penniless. I plumped for the latter, figuring I might be able to scrounge up the money somehow.

I totally couldn't. I headed over to the docks, where both Bina and the man I'd just promised to help awaited my help. At that point I could have attacked the thugs, but that didn't seem wise. So I betrayed Bina. I told the thugs that everything was her fault, I got my reward, and Bina very understandably began to hate me. If I'd wanted to, I could have tried provoking her into attacking me (which would have had an extra chance of working, thanks to the supporting influence of my two new friends). If I'd done that I could have killed her without diplomatic consequence, without having to fear her retribution down the line. I chose not to, though, and suffered for it an hour later when she popped up in a bar and told someone they couldn't trust me. 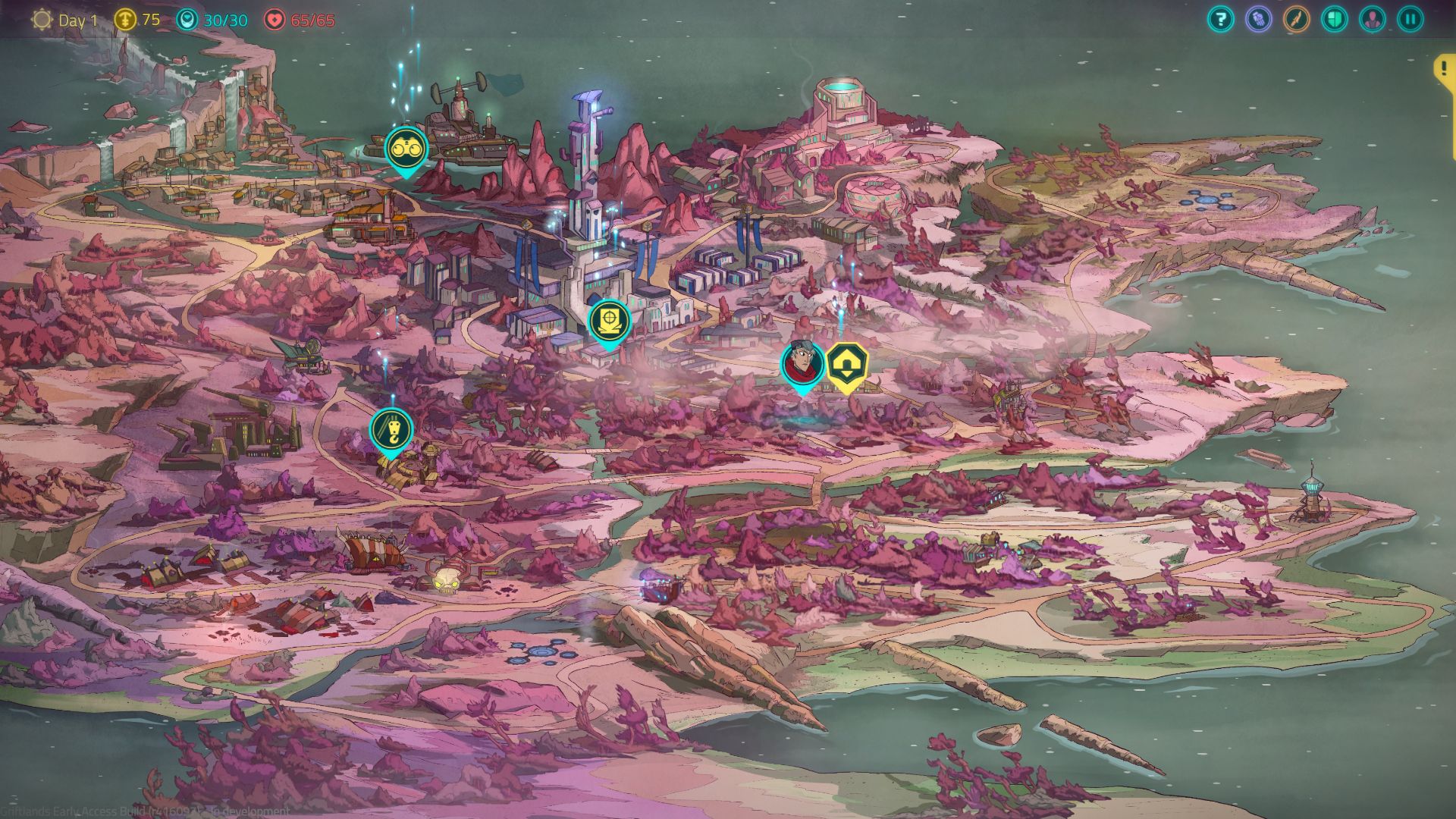 I love me some rippling consequences, and Griftlands is chock-full of them. Little event sometimes pop up when you're travelling around the (incidentally gorgeous) map. Veep ambushed me while I was making my way elsewhere, and offered to sell me his alien dog. Because I'd helped him out earlier, I had an easier time persuading him to hand it over for free. It turned out, however, that while untrained alien dogs are handy in a scrap, having one next to you is something that people can bring up in arguments. The first time it happened I got to shout "how dare you bring my dog into this" at my screen, and I will cherish that memory for a long time to come. 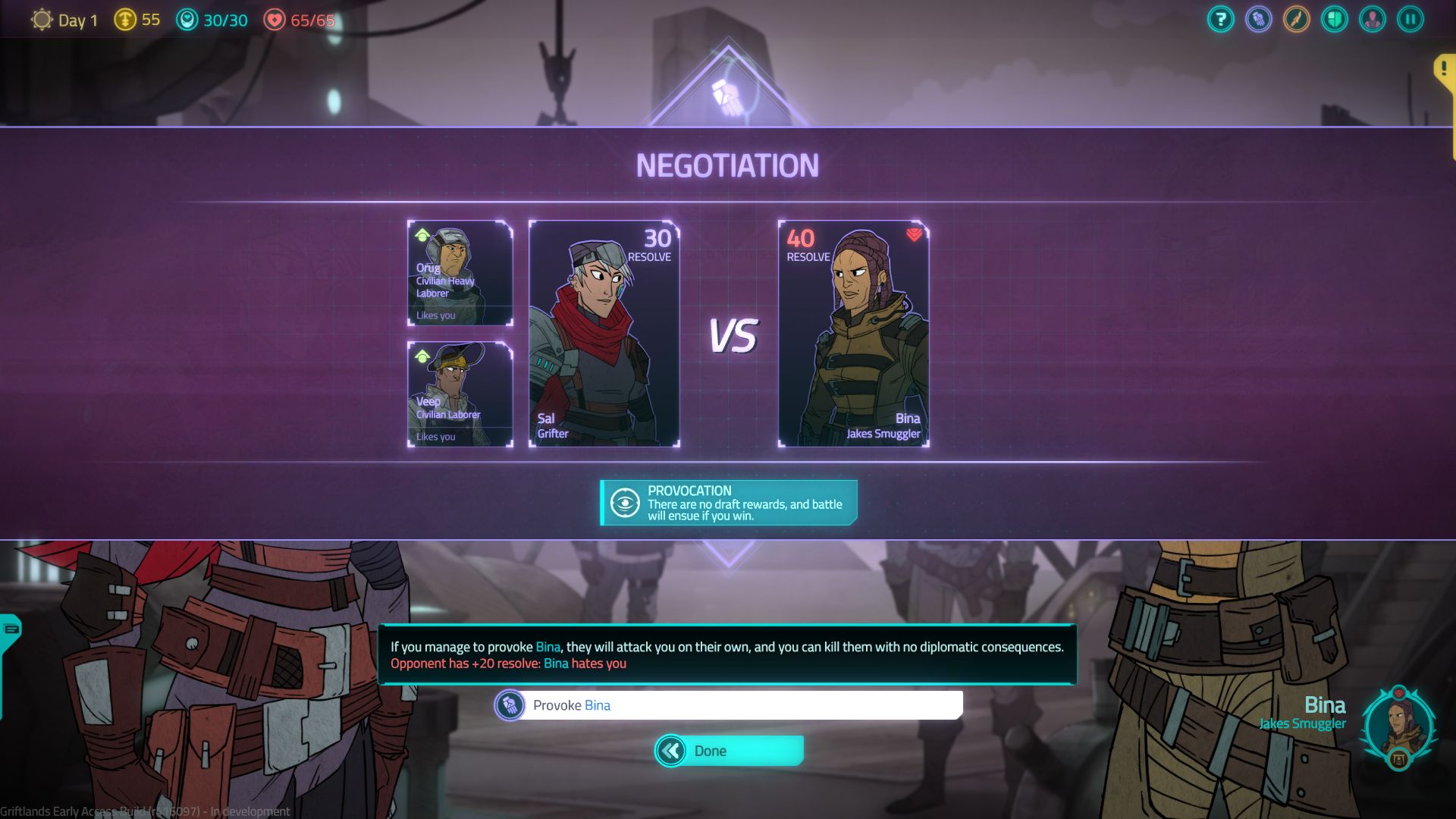 That was the peak, though, and we can't put this off any longer. It's time to dip our toes into the ultimately-disappointing waters of Griftland's card game. Or games, I should say - there's one for combat and one for conversation, and they use completely different decks.

Brendy (RPS in peace) has already described how they work in detail, and even though we're a year on I'd still echo pretty much every criticism in that piece. The negotiation game is more interesting, but also initially more perplexing. Arguing by way of cards is something that sounds like it might work, but unfamiliar territory adds a big barrier to understanding. The devs have wrestled familiar concepts into confusing terminology, and it takes a while to cut through that and see words like "composure" as "defence". The game itself has you defending your "resolve" (health) by summoning separate arguments, which your opponent can target directly. You've got to constantly weigh up whether its worth targeting your opponent's supporting arguments or their main health pool, which sort of works, but it's also unwieldy. There were often so many effects in play that I wound up with only a vague idea about what was doing what. 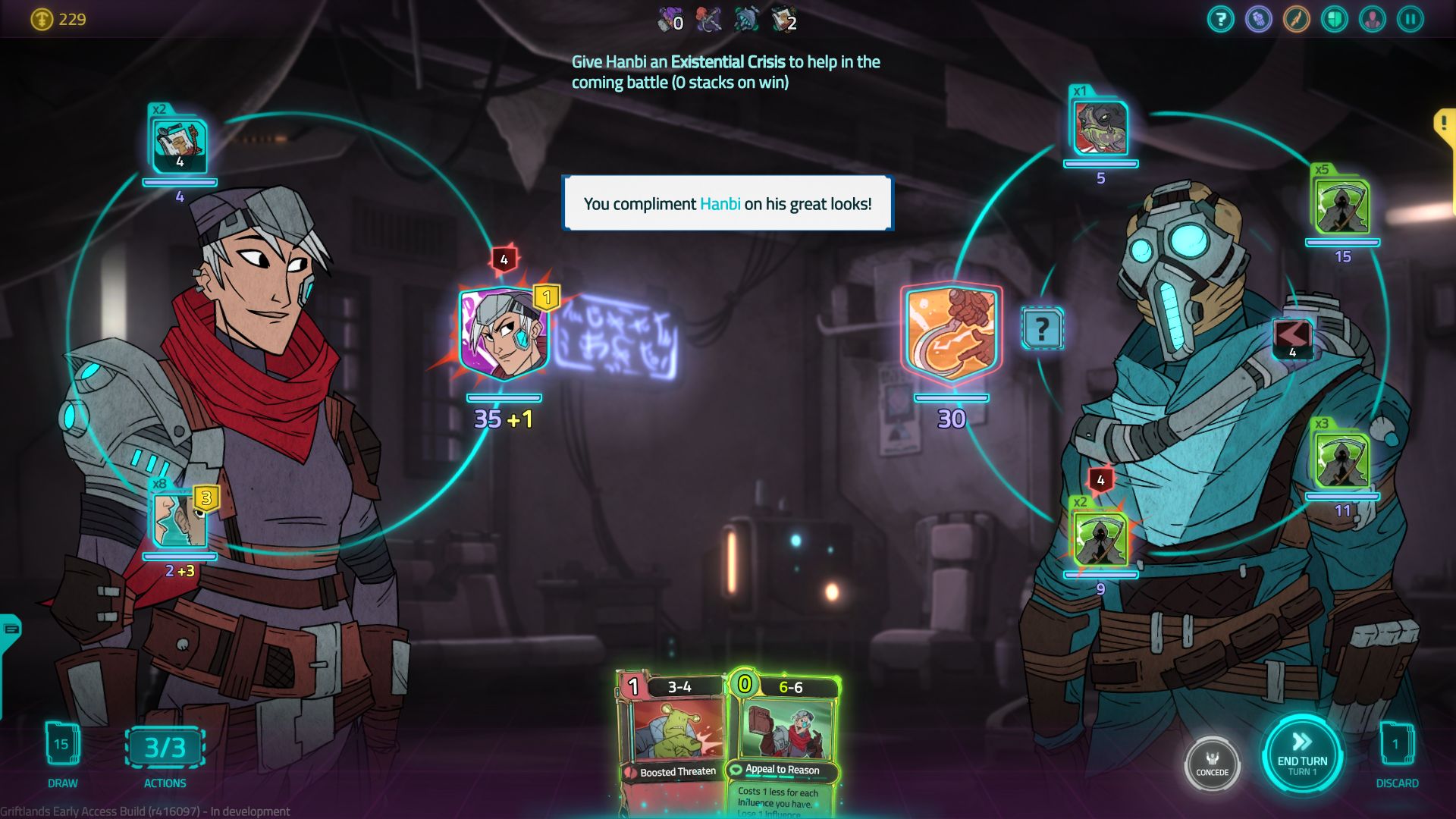 I'm a bit uncomfortable with the way I know I'd have enjoyed it more if not for Slay The Spire and Monster Train. It's competent enough, but it doesn't sing: I plumped for a strategy that seemed pretty obvious, and it served me well right to the very end. I was never excited to land a new card. Very few of them transformed what I was capable of, and instead they just seemed to slot into logical gaps in my strategy. The framing for the negotiation game is much more novel than the game itself, and the one for combat doesn't do anything I find especially interesting. Again, it's decent! It functions, it works, it's fine. But I miss my Train.

Pacing problems feed into that. A single run with one character (there are two at the moment, each with different stories) took me about 6-7 hours. I think I might have been on the slow side, but I played over several days and so wound up having to awkwardly re-familiarise myself with my deck's intricacies. Individual encounters outstayed their welcome, too, and towards the end I often felt like I was semi-mindlessly shuffling towards an inevitable conclusion. I know I'm saying that it's at once too simple and too complicated, but, well, it is. 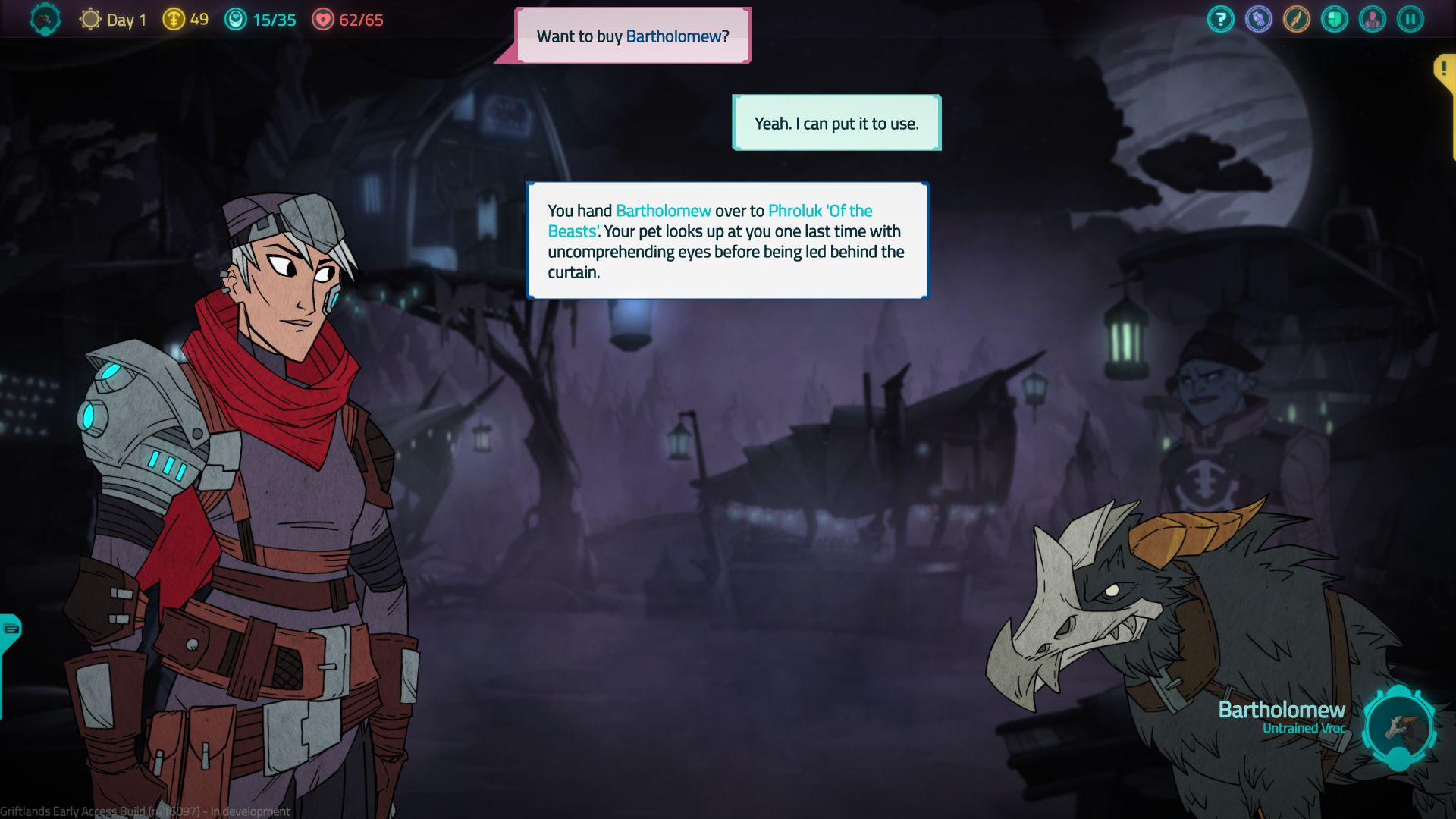 Do I recommend you go play Griftlands anyway? Maybe. I like the world and the writing, and I especially like how it can click its heels and conjure up a story - as long as you don't get bogged down in overlong battles. It's certainly worth keeping an eye on, and if any of this sounds interesting then an early access visit might well be worth your while. Just do your best to forget about how you could be playing Slay The Spire or Monster Train instead.