It's better to be fashionably late than a total no-show. Blanka's absence from Street Fighter V at launch was a bitter pill to swallow, but everyone's favourite weird Brazillian jungle-monster-man is back today and on form.

Rejoining the likes of Ryu and Dhalsim and a few other frenemies from the good old days of Street Fighter 2, Blanka has picked up a few new tricks and some impressive costumes on the way, including one very, very silly one..

While I generally love what they've done with Kermit's cranky third cousin, I really don't think the English voice they've given him (as heard in the trailer above) fits too well. Still, at least you can pretend it's just some random guy providing commentary if you go and do the right thing and stuff Blanka in his ridiculous plush doll costume, which I'm sure you're all itching to see again, right? Oh, okay then. 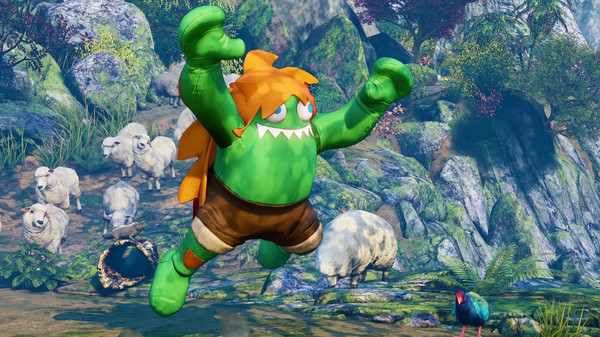 Quite how anyone is meant to pick any other skin for him, I will never know... It's just so perfect.

Our Brendan shared a few choice details about Blanka's return a week ago (although somehow missing the revelation that his birth name is Jimmy, according to Capcom's Steam blog post), but here's the official run-down on the new tricks and techniques that Mean n' Green has been practicing, straight from Capcom:

New to Blanka’s arsenal is a command grab called Wild Hunt, where he leaps forward and viciously scratches the opponent before throwing them a set distance away from him. This addition to his move set opens up more opportunities for Blanka to be aggressive.

Blanka immediately ducks for cover for a short time before rising back up. His V-Skill can avoid many attacks, including fireballs. After performing Coward Crouch, Blanka can follow up with either Wild Lift (Punch Button) or Raid Jump (Kick Button). Wild Lift sees Blanka move forward while swinging his arms up to launch the opponent in the air and can be followed up by a normal, special move, or even a Critical Art. Using Raid Jump, Blanka swiftly jumps in the air where he can use any mid-air attack to advance.

Blanka’s V-Trigger I gives his special roll attacks more damage and can then be followed up by certain attacks, including his Critical Art. It also powers up his Electric Thunder and changes the animation so Blanka steps forward while unleashing the electric current. On hit, the opponent is launched slightly in the air and can be followed up with a rolling attack.

Finally, Jungle Dynamo unlocks Ground Shave Rolling (HP+HK), which can be used as a combo extender or a way to charge in. This move was a super move in previous games, but is now a special move in SFV: AE.

Lightning Beast unlocks a special move, Rolling Cannon (Direction + HP+HK), which can be performed after using Rolling Attack, Back Step Rolling, and Vertical Rolling. Rolling Cannon can be used in multiple ways, such as extending a combo for more damage or changing positions to surprise the opponent.

In this Critical Art, Blanka slams his opponent into the ground in a series of electrifying rolls that ends in a move reminiscent of Lightning Cannonball from Street Fighter IV.

Quite a bit of new stuff to learn before the next competitive season, then! Blanka is the second of six characters coming this  year through the Season 3 character pass, which costs a hefty £25 normally. You can also unlock him through Fight Money, the official in-game earned currency, although unless you're a serious Street Fighter pro, that might take a while.

We've already seen the return of Sakura, and the coming months will bring returning favourites Cody and Sagat, villainous Cammy lookalike Falke, and G, who is entirely new, and looks like an Abraham Lincoln-themed pro wrestler. Well, it's good that they're keeping Street Fighter weird and fresh through 2018.