The lesson here is "never go to sleep." All sorts of things happen while people sleep. Cats go on adventures, presidents threaten nuclear war and, well, ex-Valve writers post thinly-disguised plot summaries of the unreleased and, so far as best guesses go, long-cancelled Half-Life 2: Episode 3. Long time Half-Life scribe, the excellent Marc Laidlaw (who left Valve last year), casually tossed out a link to his website last night, which led to a short story about Gertie Fremont, Alex Vaunt and their climactic battle against evil alien invaders the Disparate. (The site's having a wobble, but the page is archived right here).

While that might sound like satirical tomfoolery, the actual story very much sounds like how the final chapter of Half-Life 3 could have played out. It involves time-travelling cruise liners, resurrected overlords, the heart of the Combine and the fate of one Doctor Gordon Freeman.

This is really happening.

First things first: until Mister Laidlaw breaks cover with full context for this tale and what, if any, links it has or had to Half-Life 2: Episode 3's development, there's no way of knowing if this is the shape game would have taken (or will yet take, haha). For now, he persists with the line that his revelations are nothing more than "a genderswapped snapshot of a dream I had many years ago".

This might imply all this ever was is draft plot summaries, merely a glimpse of scribbles from the writer's notebook rather than the totality of Valve's vision for a never-was game. But, in the near-complete vacuum of Half-Life news over the past decade, this is as real a deal as we've ever got, and may ever get.

I strongly encourage you to read the story itself rather than rely on my summary below: there's far more detail, other character's fates are revealed, it'll only take ten minutes, and the entertainingly Poe/Lovecraft-esque writing style (i.e. a first person letter about monstrous events, penned in a Victorian tone) is most agreeable in itself. As noted above, most of the characters have been genderswapped - Gordon is Gertrude, Alex is... well, Alex, but a male Alex, we get Wanda Breen and sinister grey figure Mrs. X.

As long-suspected to be the case, the tale centres about a great lost ship, the Borealis (here named the Hyperborea), stranded in the Arctic (or Antarctic, depending on which version you go with) and which contains something of potentially critical importance to the human-Combine war. 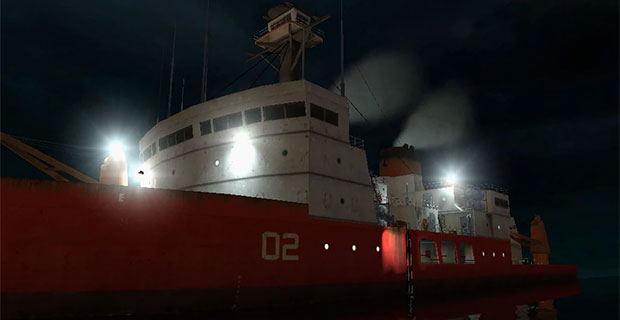 In short, the ship contains a device, created by scientists before the Combine invasion, that enables it to traverse space in an instant. However, it also possesses some manner of time-jumping prowess, which a) means the ship flickers in and out of existence, thus making the act of boarding it complicated for Gertude and chums and b) once they do board it, they are treated to visions of other times and places - including the Seven Hour War Nine Hour Armageddon and an immense Combine Disparate staging ground, somewhere off in deep space.

With the ultimate assistance of a resurrected backup of the mind of, er, Wanda Breen, now housed in the sluglike form of a Disparate overlord and who reveals that they were more of a prisoner than they previously admitted too, Gretrude and Vaunt take control of the Hyperborea and eventually come to the realisation and decision that they can steer it right into said staging ground, thus delaying - or perhaps even ending - the Disparate's ongoing invasion of worlds, and hopefully opening the way to Earth's salvation.

Our heroes seem set to perish in the impending explosion, but "sneering trickster" Mrs. X - gee, not a man? - appears at almost the last moment. But, rather than absconding with Gertrude, as per previous form, she whisks Alex off to either safety or servitude and leaves Fremont to her fate. In perhaps the single most intriguing detail here, it's also revealed that Alex previously met the not-G not-man when a child. Spooks!

Is this the end for Gertrude Fremont?

No, because those other space-bending mysteries, the 'Ghastlyhaunts', appear at the last moment and teleport Gertrude to some unknown safety - though not before she realises that the sheer scale of the Disparate world means it is unlikely to be much affected by the weaponised Hyperborea.

But what of Alex, spirited away by Mrs. X to who only knows where? It sounds as though there may have been new adventures there. Or could the Ghastlyhaunts have seen Gertrude eventually reunited with him?

Is this it? Is this really how it ends? Will the great silence now fall, for many more years again, or even forever? It should be noted that there is no small amount of apparent subtext about HL2:E3's development in the tale's final paragraph:

"Enough time has passed that few remember me, or what I was saying when last I spoke, or what precisely we hoped to accomplish. At this point, the resistance will have failed or succeeded, no thanks to me. Old friends have been silenced, or fallen by the wayside. I no longer know or recognize most members of the research team, though I believe the spirit of rebellion still persists. I expect you know better than I the appropriate course of action, and I leave you to it. Except no further correspondence from me regarding these matters; this is my final epistle."

Might this imply that the studio lost sight of the project, that too many of the development team have moved on (or been moved off), but also that there may be someone within Valve who fight for more Half-Life despite its apparent abandonment? In any case, it would seem that this is the last thing Laidlaw intends to say about the Half-Life 2: Episode 3 that might, and should, have been.

After this, can we be at peace? Or will this just re-awaken old hungers? Thank you, in any case, for trying to calm our long-held worries, Mister Laidlaw.