“It’s the most hyper capitalistic place in the world.”

I’m sitting at the Las Vegas Linq hotel bar with Snorri Árnason, game director of Project Nova, the sci-fi shooter spin-off of Eve Online. We’re here to talk about the tactical shooter he's showing off at Eve Vegas, a yearly gathering of spaceship scoundrels. But first, I have to know. Of all the places in the world to squeeze in over a thousand Eve fans like sneaky space sardines, why Vegas?

“It’s like, an intergalactic space station.” Árnason gestures around us. “Gambling, Liquor. Everything goes.”

Space station or not, the bar is infinitely more inviting than the cold ship exterior that plays host to Nova’s shoot outs. The tactical shooter pits you and up to three cloned space pals either against each other in PvP, or teamed up against AI Sansha’s Nation in a frantic game of point capture.

Our demo was set up for teams of four. Even on easy, three players felt like missing a limb. Two was a slaughter, as the zombirific Sansha’s Nation took control of the surface of the gigantic battleship while my teammate and I scrambled for the capture points needed to win the match.

I later find out that the better you perform, the more aggressive the Sansha become. Between the “Western Gothic” look that comprises Árnason’s vision for Nova, and the developer’s focus on an “overarching data collection system” that works to keep the AI one step ahead of players, there’s a feeling of seething nastiness to the antagonists.

I do wonder though, with the AI so seemingly reactive, wouldn’t it be possible for well-coordinated teams with fifty or a hundred hours of play under their belts to control the flow of battle?

“Not gonna happen” according to Sumo Digital lead designer Paul Wright. “The system can’t be gamed in that way. You can try to influence. But we, as developers, can’t predict the outcome. There’s possibilities, but it can’t be guaranteed.”

If there are ways to game the AI, I certainly didn’t crack the code during my several PvE rounds. Although Wright says that players ‘with a first person background’ should be able to handle the lower difficulties, the game was designed with dedicated players in mind.

“We’re all hardcore players at the end of the day. We understand our hardcore Eve players are not FPS players. We want to accommodate them. If anyone said Eve wasn’t hardcore, they’d be lying through their nose.”

Of the three loadouts available for selection, I end up getting comfy with the auto-rifle wielding assault class. Players have a regenerating shield, but there’s no pickups throughout the map. It’s up to the assault class to lay down tools that refill the ammo and health of teammates standing in radius.

I got a chance to step into the boots of the heavy class, too, a truly beefy enchilada in a roster of enchiladas not lacking in the beef department. Trading out the assault’s rocket slide for a shield befitting this most loaded of nacho platters, the heavy also boasts a satisfying, if slightly slow rocket launcher. I should probably mention that the heavy class has a special name that I may have forgotten because I was still full of Mexican food at this point.

Cumbersome heavy weapon aside, shooting Sansha in the face generally feels tight and weighty. Kills result in corpses crumbling and floating about for a bit before dissipating into a cloud of space dust (514 hoho). According to Wright, this ragdoll was the result of a bug that they ended up keeping, consistent as it was with the way nanite suits behave in the Eve universe.

This is fortuitous, since otherwise, Sumo Digital have been developing the gunplay separate from CCP, whose role in the project has been one of lore and art direction. Árnason is a passionate fan of sci-fi and tabletop gaming, and when we talk about how Vegas’s atmosphere of frontier lawlessness repackaged in the comforting unreality of a simulation may as well be a metaphor for Eve, we end up down a pleasingly nerdy rabbit hole.

“The seedy, noir element… it’s always been a mainstay of sci-fi,” he says. “Blade runner, Neuromancer. Cyberpunk 2077 gave me the biggest nerdgasm ever. I’ve not been as excited about a game in 20 years.” 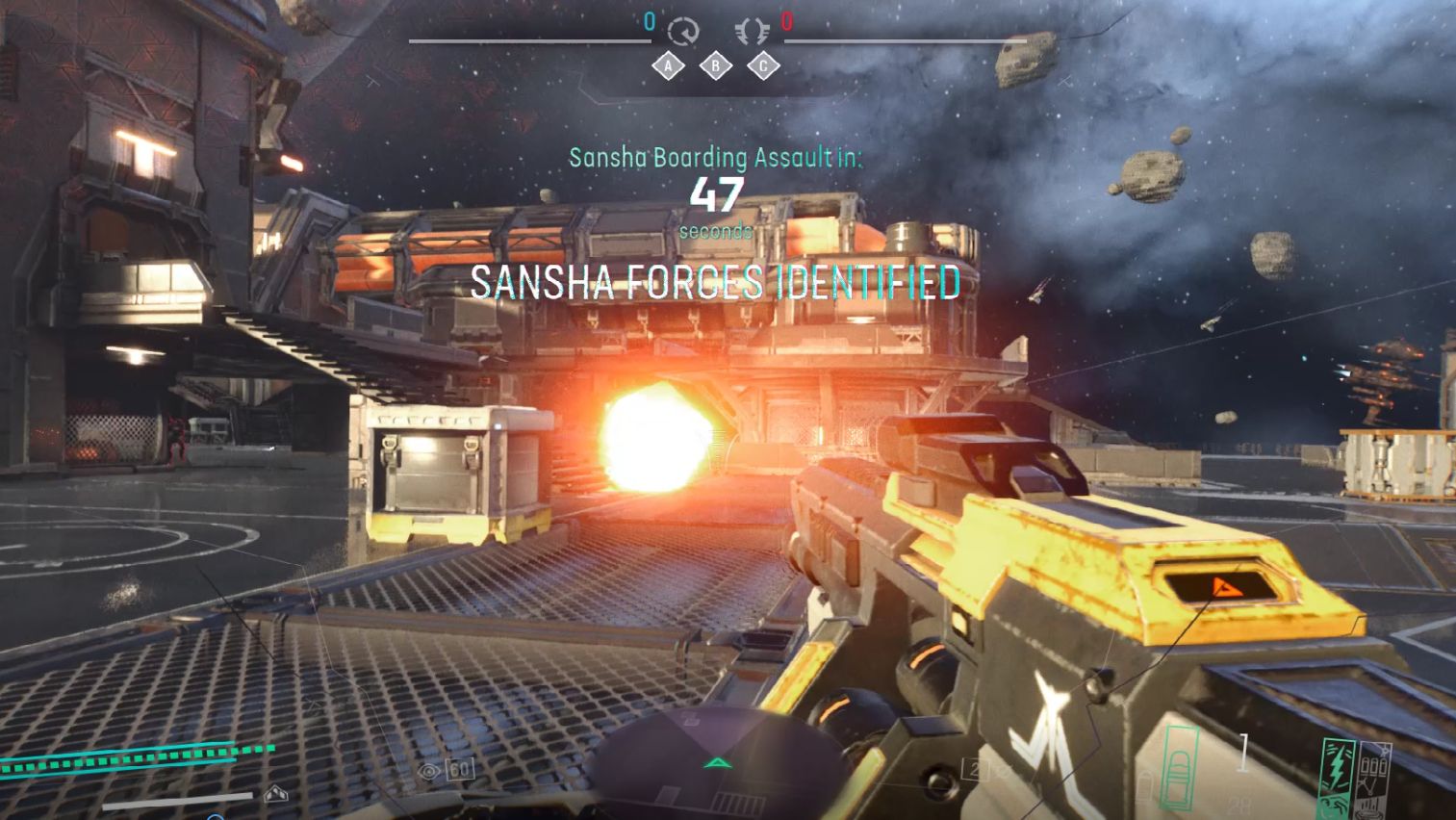 A chat about Dune leads to Jodorowsky, and eventually Giger, since we’re both that kind of nerd, apparently. Árnason tells me that while designing the interior of Sansha’s Nation - Project Nova’s antagonist - the one piece of art direction he gave to the team was “Not Giger-esque!”.

“It’s so easy to go cliche!” He tells me. “Don’t do any bones, or neck ridges or whatever. Try to find a new spin on organic and scary, but not Giger-esque.”

In an earlier presentation, he showed journalists some inspirations. One of the slides showed an unsettlingly serene child’s death mask.

“It was just a creepy thing I happened across. We did a lot of literary exploration on the game itself. To discover what the game is and what the game isn’t. We're working with an interesting simile between war clones and Sansha. One is unaware, one is not. War clones desperately want freedom. Sansha want to stifle freedom.” 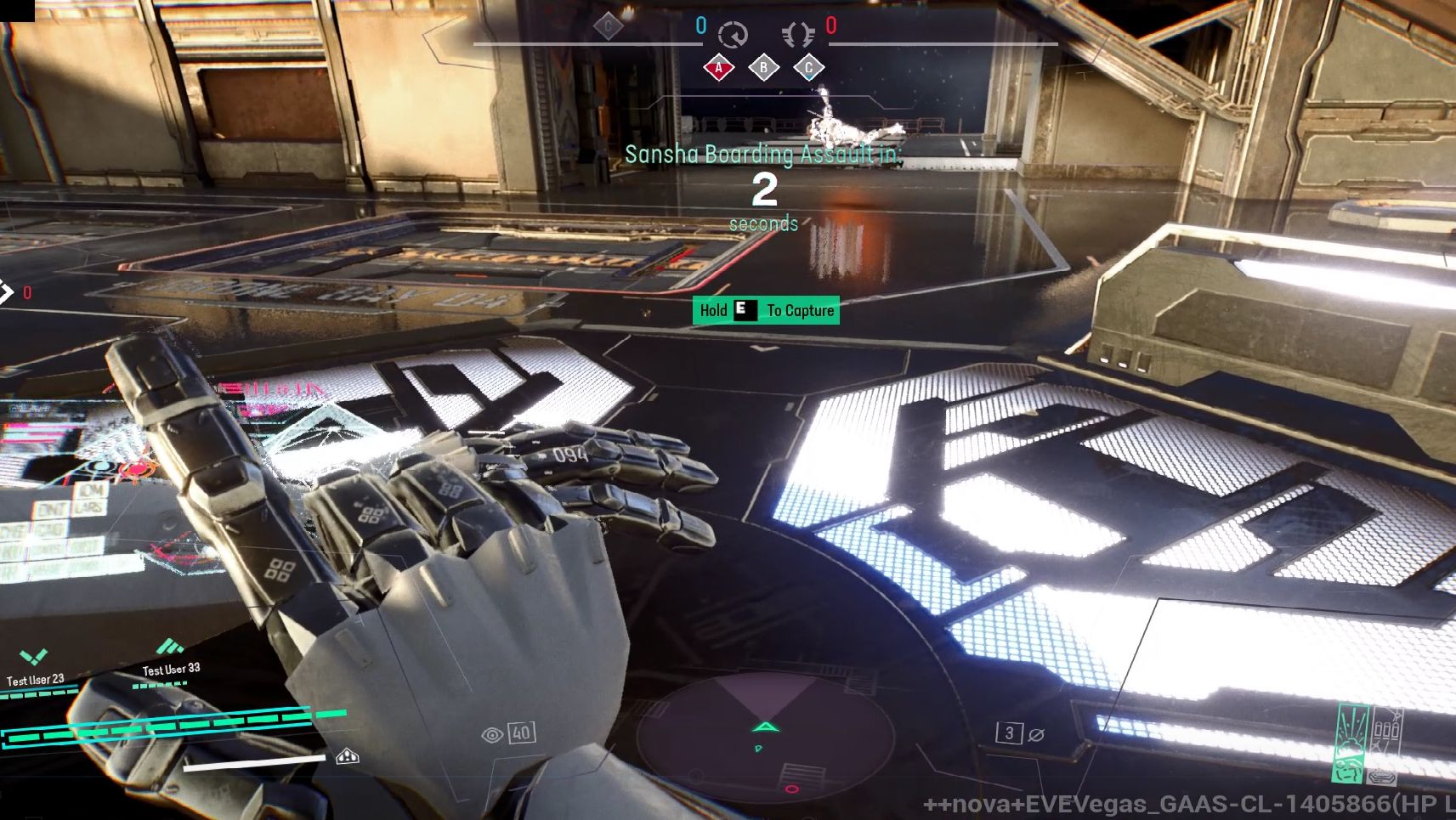 It’s not quite as black and white as all that, though, according to Árnason.

“You think of a mercenary. ‘I’ve got a contract... I kill the Sansha. I save the cargo.' But what’s the cargo? Slaves, drugs? So I save the slaves from becoming a different type of slave, but maybe they’re happier as Sansha slaves than normal slaves. And that grey morality has always been what Eve is about.”

Nova isn’t just about the lore though. With the assault class at least, I was struck by how finely tuned the project’s time to kill was during PvP; a meaty mix of Destiny shootouts and COD’s lightning-fast executions.

“We wanted a decent firefight where people wouldn’t be insta-killed and not know what the hell was going on, but not long enough that you’re pumping a whole clip into someone,” Wright tells me.

“We definitely want to have a thinking man's elements. A reaction based decision,” says Árnason. “He has this [ability] - I can react. Abilities like the shield booster, and cloak. If you’re dead, you can’t do that. But we also don’t want drawn out firefights either.”

Both Wright and Árnason were keen to emphasise Nova’s ‘deep progression system’. Like so much at this stage, though, this element remains conceptual. Some excited chatter. A few concept slides. Still, Árnason seems to have a roadmap envisioned.

“We have to be smart about content.” He tells me. “We can’t be a content furnace. We can’t have people just going for a raid, then expecting the next raid. Blizzard can, Destiny can, but we can’t.”

I ask him how the shadow of something like Destiny plays into development. How does it feel working on a consistent world shooter in a post-Destiny environment?

“If they hadn’t done Destiny 2 - if they had just made the Destiny MMO - we would be in more trouble. But they proved exactly my point, which is - I want a game without resets and sequels, and they went ahead and did sequels! I would be playing Destiny the MMO, on PC, if it existed. As a player, it disappointed me.”

Admittedly, it’s a bit of stretch to imagine something with the scale or player retention of Bungie’s spacefaring scratchcard simulator from the small slice of Nova I played, with its set loadouts and disconnected matches. A Dust 451-style consistent universe is hinted at in various presentations over the weekend, but never confirmed. I ask Árnason what design lessons he’s taken from Dust into Nova. 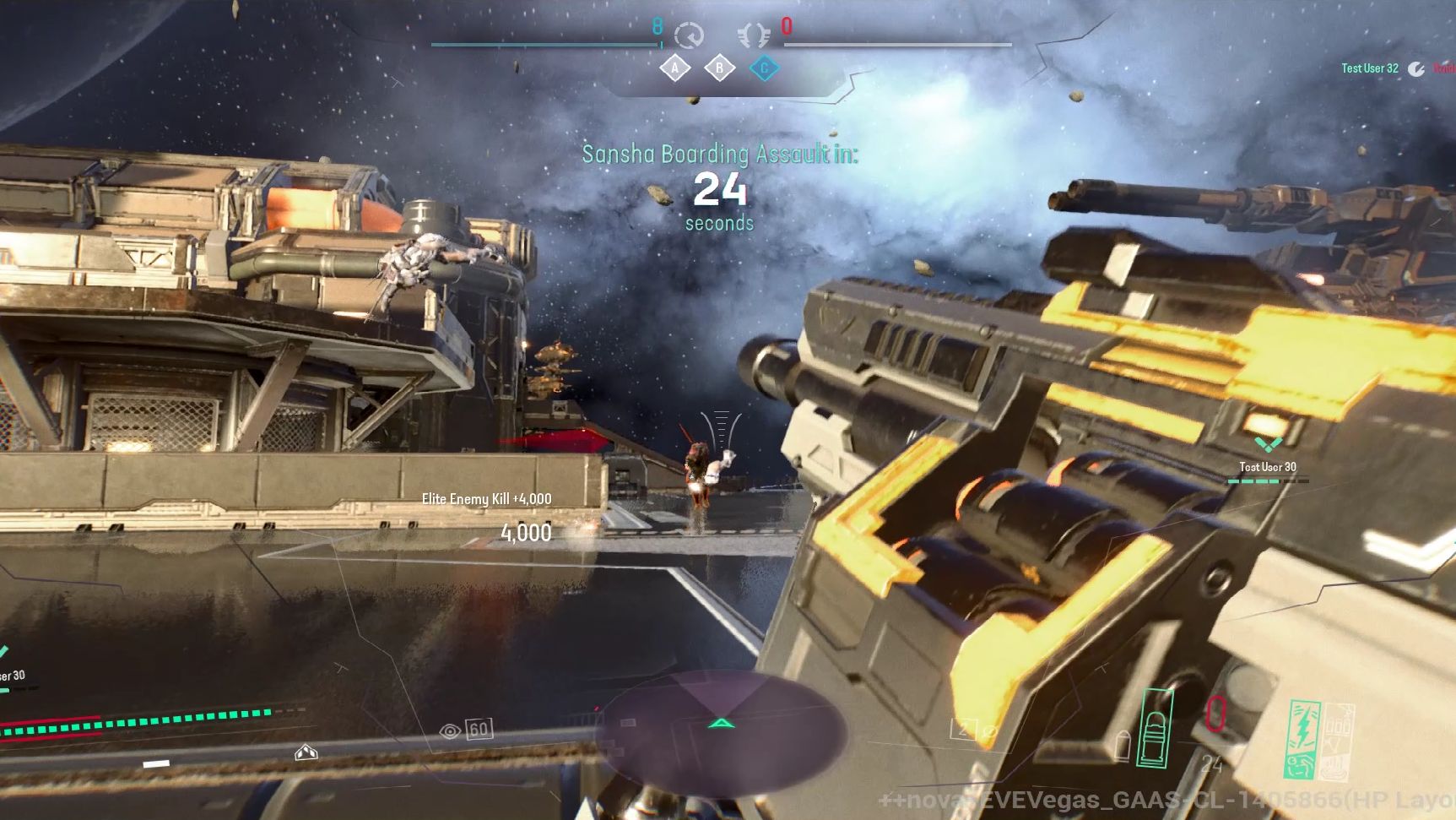 “It’s trying to find the CCP DNA. The biggest lesson is: you can’t apply game design between games. You can’t just apply Eve onto an FPS. You have to reinvent. We were too liberally applying Eve on to Dust, instead of saying: how to we transfer the emotion or the impact of this gameplay elements onto the FPS.”

“We applied ‘death matters’ onto Dust as ‘you lose everything when you die’, which sounds okay. Very dystopian. Makes sense. The body is there. Your suit is there. But… this makes people very risk-averse. We want to keep the pillar ‘death matters’...but applied in the right way for the FPS.

“We didn’t want [the player] to sit and wait. We tried it as a prototype. A Gears of War type horde mode. Gears of War does it well because it’s in a room. There’s no exploration, no connection to the universe. We wanted that exploration. Why are we on a spaceship if we can just be in a cellar somewhere? We wanted to add a layer of discovery.”

Alongside the 1100 players at EVE Vegas, Árnason tells me there are ‘thousands’ more already signed up for the pre-alpha build. There’s still a lot of uncertainty surrounding Nova’s direction, but right now, CCP aren’t asking anything from players besides their time and suggestions. The current build represents a solid foundation, and if there’s anything Eve has proven, it’s that the level of communication CCP have fostered with their player base over the years has the potential to result in evolution of concept on a massive scale.

After half-joking about the VR Warhammer 40k game he’d love to make “when this fails”, I ask Árnason if he has any major worries about the project.

“What I’m dealing with now is expectation management. Dust players expect Dust 2. Eve players will expect... a lot. People will say: why are you doing this if COD exists? It’s a difficult path to navigate.”

“We’re trying to find our own thing, but I can’t imagine a world where no-one can ever make another FPS because it’s like Halo, or Cod, or Battlefield, or Killzone.”