I’ve only been in Los Santos a day and I’ve already been taken advantage of by a greedy CEO. Welcome to modern America, I guess.

Unlike most CEOs, though, this one is doing the manual labour himself. He’s standing on a small hillock in GTA Online’s small desert town of Sandy Shores and shooting me with a high-powered rifle every time I respawn. I run, he shoots me. I crouch, he shoots me. I hide, he shoots me.

I jump, sprint towards a barrier, hide behind it for a minute until a car comes past, run for the driver-side door and pull it open in a bid to make my escape from this marauding megalomaniac. He shoots me. I’m sport for him, a human rabbit to hunt in much the same way that real-life CEOs probably hunt people when the cameras aren’t on them. And there’s no way out.

Well, there’s one way out. The classic way to avoid a boss’s negative attention: by abusing someone else. I wait until another car trundles along, keeping sensibly to the speed limits on the dirt road like an upstanding citizen. They’re my prey. The car slows down to take a turn and I shoot the driver in the head. They slump forward onto the wheel and I make my dash, running in zig-zags across the yellow sand like I’m running from a crocodile. The business lizard, in his suit and sunglasses, misses his shot, and I’m in the seat, behind the wheel. I can see freedom, the bright lights of Los Santos proper in the distance. 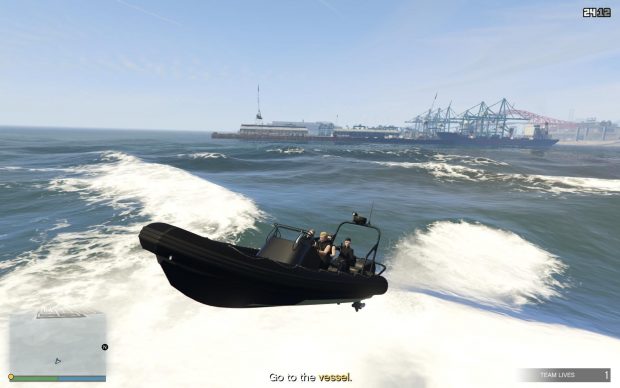 But I don’t turn towards those lights. Not this time. This time, I’m standing up for the little guy, the worker, the human cruft, the new GTA Online player. We’re mad as hell (from being spawncamped so many times) and we’re not going to take it any more! I hammer down on the accelerator and swing the car towards my aggressor. He’s going to be first against the wall: literally, against the bumper of my car.

He shoots me. Right through the head, as I’m barrelling down on him. I sigh and log off. He’ll probably be gone by the time I come back.

That’s one difference GTA Online has to reality — the ability to just log off when someone’s decided to dedicate their time to really yanking your chain. There’s another in allowing anyone to become a CEO, assuming they’re willing to put in the hard graft to get there. The rank is a codified one in GTA Online, and is available to anyone who can stump up the cash for both a business and a warehouse: two components that unlock Special Cargo missions. These in turn are composed of two parts, tasking players first with buying or sourcing their cargo, and then selling it by driving, flying, or sailing to a specific location.

But the decision to run these Special Cargo jobs shouldn’t be taken lightly. Picking up a delivery marks you out to other players on the map, painting a big old target on your back. My tormentor wasn't a target — he was just a bastard — but later in the day I did band together with two other players to disrupt another big boss's big job. We swept along after her as she careened along the highway, shooting her tyres out until she flipped her car, allowing us to circle the stricken wreckage like proletariat vultures. It’s these moments that GTA Online is at its best, where opportunist players become enemies, setting ambushes or making impromptu attacks as you whizz by. Defense comes in the form of Associates — players who might not have the liquid capital to grease their way to the top of the greasy pole just yet, and who sell their services as a warm, gun-toting body for hire. 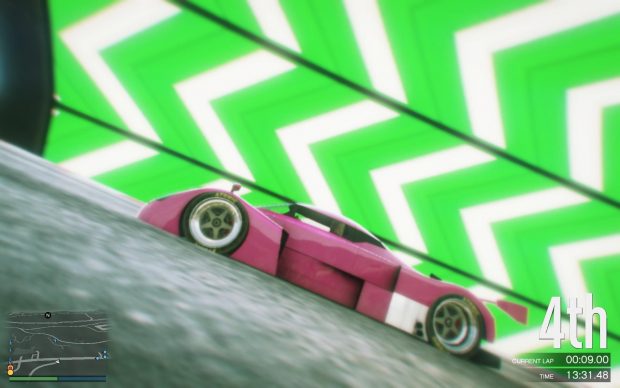 Both CEOs and Associates were introduced in Rockstar’s 2016 Finance and Felony update — one of many chunky, free packs the developers have added to their game since its PC launch four years back. CEOs, for example, are an extension of the VIP system introduced in 2015’s Executives and Other Criminals pack. After building a business, players can then move into arms dealing from nuclear bunkers: an activity added last year in the Gunrunning pack. Big-ticket Heists, too, have kept coming, the voice-acted missions the closest Rockstar has got to proper story DLC. The most recent — Doomsday — is particularly impressive, offering a set of multi-stage jobs that ends with players donning a jetpack and shooting down a squadron of helicopters. These heists remain GTA Online's brightest bits, and I chain-played these stages on my return to the game, piecing together the narrative and forging uneasy camaraderie with randoms across several happy hours of heisting.

These major additions have been joined by smaller and sillier stages and modes. Stunt modes offer huge jumps as players race on wild tracks suspended above Los Santos, like GTA’s take on Trackmania. Transforming races put players at the controls of impossible wizard machines, able to flit back and forth from car to plane and back again. These races should be GTA at its most chaotic, tense, irreverent, and enjoyable, but the tracks go on too long and there’s not enough recourse to fix a bad start. That frustration meant that my opponents tended to turn collisions off, forcing me to race against a multicoloured melange of incorporeal cars: a weirdly sterile existence, potentially wacky races turned into straight-faced time trials.

I started to ignore races after a few hours, unwilling to commit another 10 minutes to an activity whose outcome was determined at the first corner. I gave up on Land Grab much faster. The adversarial mode, introduced in the Bikers upgrade, pits two teams of neon-suited Tron types against each other, asking them to kill each other with standard weaponry while walking over tiles on the map to change them to their chosen colour. It’s Nintendo’s Splatoon, essentially, except much less engaging, dynamic, and charming. GTA has always been the sum of its parts, and trying to distill it into a pure shooter makes it feel clunky and empty. 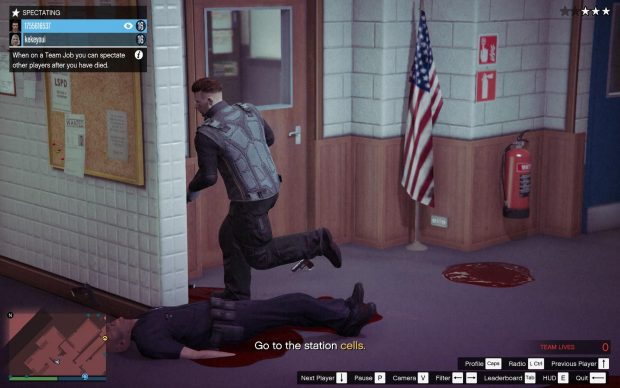 I’d much rather try Motor Wars — another example of Rockstar aping a rival game with a PUBG-a-like battle royale mode — but nobody’s playing it any more. The same is true of a lot of GTA Online’s older modes, as no players show up for open lobbies to play deathmatches, races, and other multiplayer-specific jobs that have withered and died in the game’s mess of menus.

That’s the inevitable result of four years of active development and iteration, but perhaps it’s also emblematic of overcompensation. GTA Online was dinged at birth for being too narrow in scope, for lacking a purpose and an endgame. Rockstar steered it through those complaints but it’s now come out the other side: so wide-ranging that nobody can see the purpose in playing anything but the cycle of newest modes, or those that currently pay out more in reputation and cash. Where it felt empty before, it feels too full now. Both result in a game that, at its worst, feels dangerously pointless.

That’s fitting for the tone, at least. GTA’s always been disposable with its humour and politics, but it’s very apparent that there’s not much beyond the grinding pursuit for cash in Rockstar’s version of the west coast. That’s not just a swipe at late-stage capitalism — it’s mechanically tiresome too. Rockstar have (and will continue to have) a prodigious development rate, but missions consistently revolve around a) driving to a place and b) shooting people. There’s only so many times I can drive to a place, get out, shoot a wave of computer criminals, and drive somewhere else before it starts to feel like I’m working for an actual CEO. 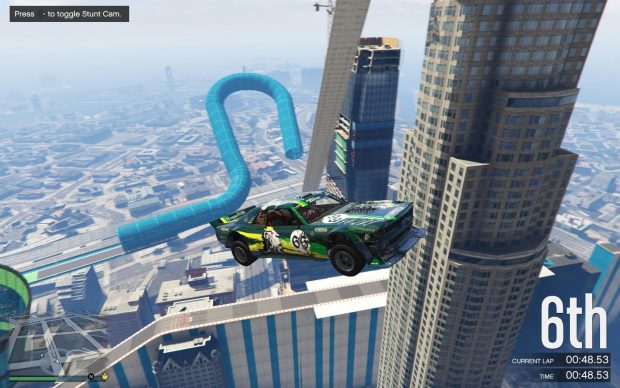 GTA Online also reacts well to both grinding and cheating the system. Get-rich-quick guides instruct players to perform the same simple jobs over and over, eschewing the unpredictable and interesting interactions of CEOs, Associates, and other systems to earn the capital to climb the ranks: the classic American arc from VIP to CEO to biker boss (?) to international arms dealer. When you’re at the top, there are then detailed descriptions on how to set up solo games, kicking everybody else out of your reality to deliver your product unmolested. At that point, GTA Online has lost its online element entirely, the fantasy of a thrilling open world replaced with the unblinking pursuit of cash.

Aaaand we’re back to the real world. In many ways, GTA Online is a better satire of the American dream than its heavy handed singleplayer story. It’s a world where the rich get richer, the poor get shot — repeatedly — and nobody really cares whether you live or die. Ironically for a game that revolves entirely around cash, GTA Online's real-money microtransactions didn't intrude too heavily on my experience, offering only cosmetic items and shortcuts to unlock better cars and CEO status. Being real-money priced out of better cars is irritating, especially when standard cars are flimsy and you're being rammed by an armoured Trans Am, but more central to the experience is the pursuit of fake in-game cash: GTA Online can still be fun if you don’t have that money, but like the real world, everybody else will be willing to step on your face to get their own fortune.

It’s that pursuit that has consigned some of its most interesting systems to the scrap heap, and kept GTA Online both a little soulless and a lot bewildering for the solo or new player. With friends, though — or at least likeminded strangers who can fill out the slots in its heists and other, better modes — GTA Online’s reality is more worth a visit than it has been before.